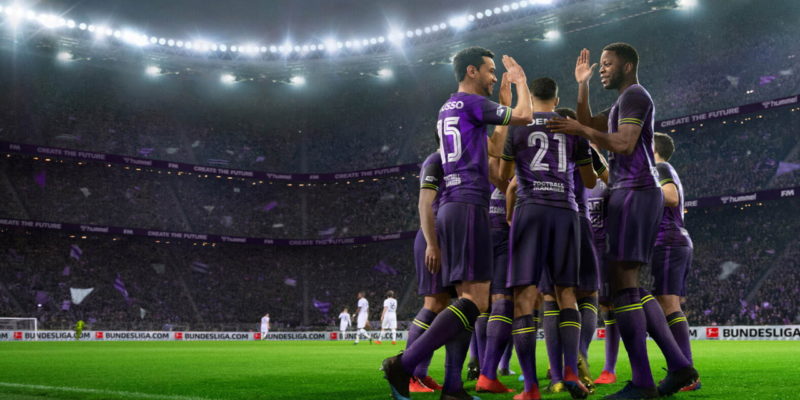 Annual sports games are often the victim of short development cycles. Strict deadlines and a lack of time result in the absence of innovation. The tragic state of NBA 2K this year says it all, but some sports game developers do at least try their best to change things up. British studio Sports Interactive is in that group and is responsible for the long-running Football Manager franchise.

Debuting as Championship Manager back in 1992, this series has been through a lot of change. And although it is still considered the champion of football management simulation games, recent titles have fallen short of expectations. But Football Manager 2021 has seen Sports Interactive go back to the drawing board and focus on fixing the biggest issues that have plagued the franchise over the last few years.

Nothing is more important in Football Manager than its match engine. This is what decides what and how often different kinds of plays should appear during a game. The idea is to simulate real-life football as accurately as possible. Developer Sports Interactive puts a lot of work into making sure the data on their end matches up with its real-life equivalent.

And yet many of the previous Football Manager games have had some glaring issues on this front. Although last year showed some improvements, the more recent titles have been guilty of failing to accurately simulate real-life football. In particular, the dominance of meta Gegenpress tactics in recent years has become problematic. 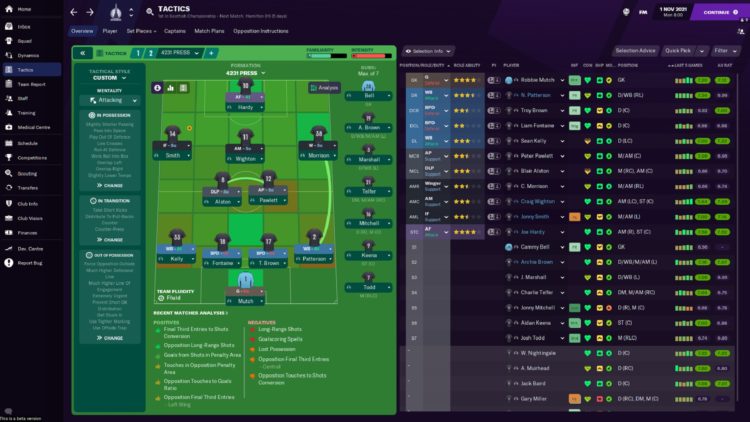 Anyone who played in an online save last year has probably seen something like this. The 4-2-3-1 gegenpress was the undisputed king of tactics.

Thankfully, Football Manager 2021 has finally switched up the formula. Throughout my time playing the beta, I have managed some good results playing niche roles I’d have never previously considered using. When deployed properly, even player roles once considered a joke like Wide Target Man and Trequartista can be extremely effective. I like this a lot, as it opens up the potential to create tactics truly unique to you and you only. The need to copy and paste the same generic high press set up is gone.

In general, many of the mental attributes appear to have been buffed this year. Although they have always been important, attributes such as decisions, teamwork, and concentration were usually secondary concerns when signing a player. But with the improvements to AI decision-making in-game, they are now more important than ever. 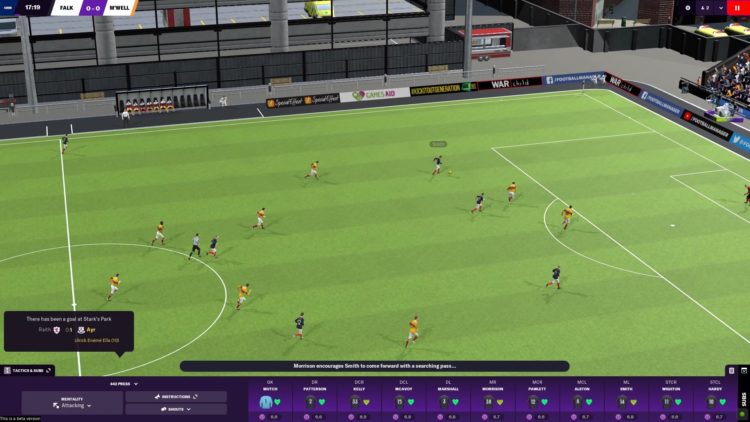 In years gone three on two counterattacks like this would have kept me up at night. But now players usually make the correct play assuming they have the required attributes.

Case in point, this year is the first Football Manager where your forwards will willingly square the ball rather than take a bad shot from an awkward angle. However, this only applies to individuals with good teamwork, decisions, and vision. By placing more value on non-technical attributes, several of the off-meta roles are further validated. The likes of Box-to-box midfielder and Pressing Forward that rely more on mental stats are now viable even at the highest levels of football.

Perhaps the biggest praise I can heap upon the new match engine is that it provokes far more emotion than past versions. Thanks to the A.I being more intelligent the outcomes of highlights are unpredictable. Last year I could guess early on if a highlight was going to lead to a goal. It wasn’t hard to read the match engine because everything was overly simplistic. But that is no longer the case. With players far more likely to make diverse decisions based on their stat pool, anything goes. This unpredictability kept me guessing through both the highs and the lows.

Football Manager has always been a game primarily about statistics and numbers. From your club’s record to your players’ performances, everything has a respective number attached to it. Despite this, the franchise has never done a great job of providing the player themselves with the necessary information to adjust and fix any outstanding problems. 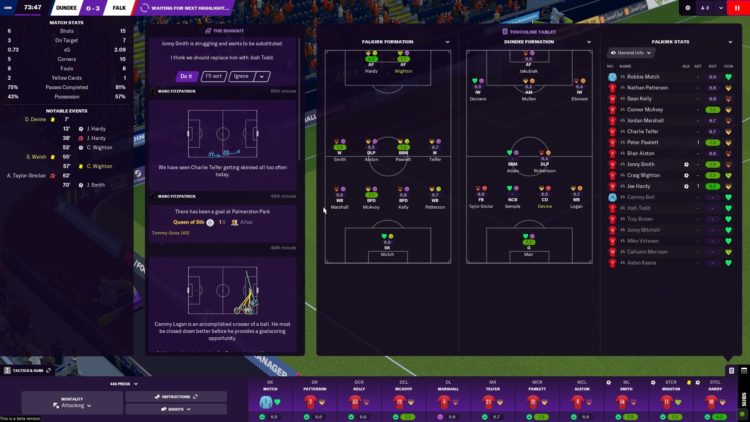 In past Football Manager games, if I was told that my winger was “getting skinned all too often,” I’d have taken him off. But the new visual aid makes it clear this has only happened twice. Given this, I left him on the pitch and he later grabbed an assist to confirm a dominant 4-0 win.

Football Manager 2021 makes an effort to amend this long-running issue. On match day, you’ll be given feedback by your data analyst. Previously, this staff role only provided generic descriptions of player performances and highlighted any obvious tactical flaws. However, this year they are essential to managing your club and even bring in somewhat of a micro-management aspect to the FM series.

If an opposing player is looking dangerous, your data analyst will highlight that threat. Unlike previous installments, this feedback comes with a visual aid. This is great as it makes it easier to judge if a change to your tactical set up is appropriate. If you can see from the feedback that you are conceding several shots from a specific area of the pitch, obviously there’s a problem. From there you can figure out if it’s an individual or tactical issue. 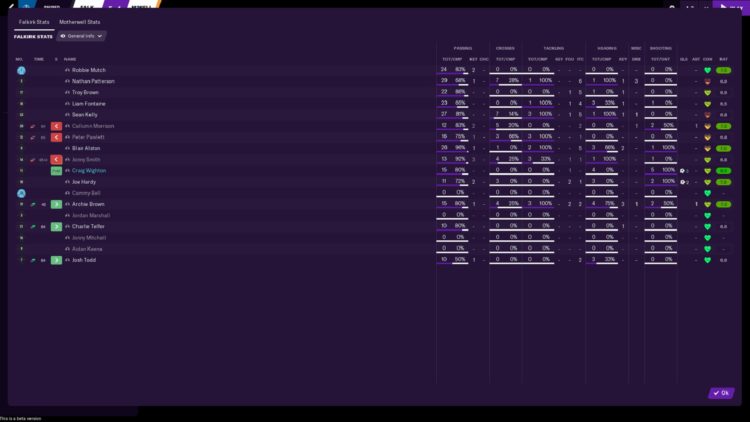 It may not be for everyone, but I love being able to analyze so many in-depth stats after a game.

Other data additions include heat maps, passing charts, and various efficiency breakdowns. Even as a series veteran I used to find making adjusting during a bad run of form very difficult. Pinpointing exactly what was wrong was almost impossible unless it was blatant. The usual fix was to abandon your identity and try out a completely new tactic. But now I can make those necessary adjustments to get my team back on track without having to overhaul those foundations that I’ve already put in place.

There’s a bigger focus on communication in Football Manager 2021 than ever before. Sports Interactive has provided new tools for players to interact with both their squad and staff but I’m not sure how worthwhile they all are. The biggest change is the addition of body language. While previously you’d choose the tone of how you speak, you can now instead select how you present yourselves physically.

For example, if you are delighted with how your team played you could outstretch your arms and embrace them. Or if they aren’t playing well or even look like they don’t care, you can throw a water bottle across the changing room. These new options affect how your players respond to both your team talks and private conversations. 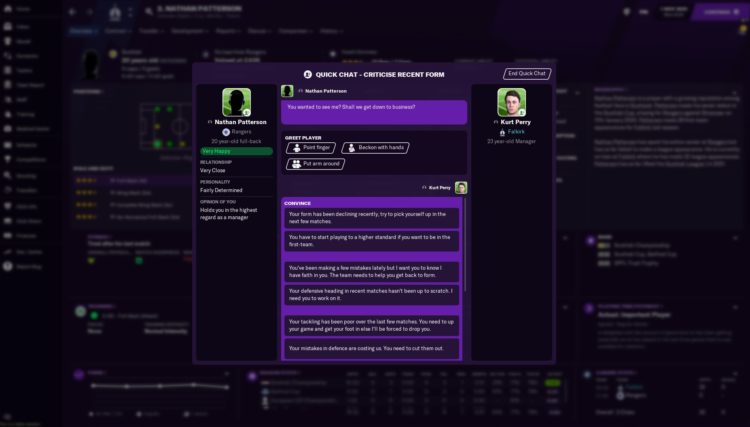 I like the idea behind the new gestures mechanic, but in practice, it’s just a glorified version of what was already there. The difference between selecting “point finger,” this year to speaking assertively last year is negligible. The most extreme gestures aren’t overly useful since they tend to backfire and the rest feel like reskins of an old system.

Given that this was a huge focal point from the developers leading up to release, it’s a little disappointing. Even when talking to a player privately, the main variable that decides if a chat goes well or not isn’t the gesture used. Your status at the club, relationship with that player, and the player’s personality are all more important. You can have an exceptionally successful save without even touching this new feature. And at that point, why even bother introducing it?

Football Manager 2021 is a substantial improvement over its predecessor. Even though there aren’t any new major game modes or fundamental changes to how you play the game, that’s not necessarily a bad thing. Sports Interactive has instead spent the year tweaking and fine-tuning the biggest issues present in the franchise’s previous installment. For me, the drastically improved match engine and in-depth data provided is enough to justify its $44.99 launch price. But if you’re not a huge fan of the World’s Game and weren’t already invested in the series, I doubt this will do much to change your mind.

A noticeable improvement over last year's installment. Football Manager 2021 addresses many of my personal peeves with the series whilst keeping the core design philosophy of the franchise intact. However, it is lacking a little in the way of new game-changing features and the few added haven't been implemented too well.