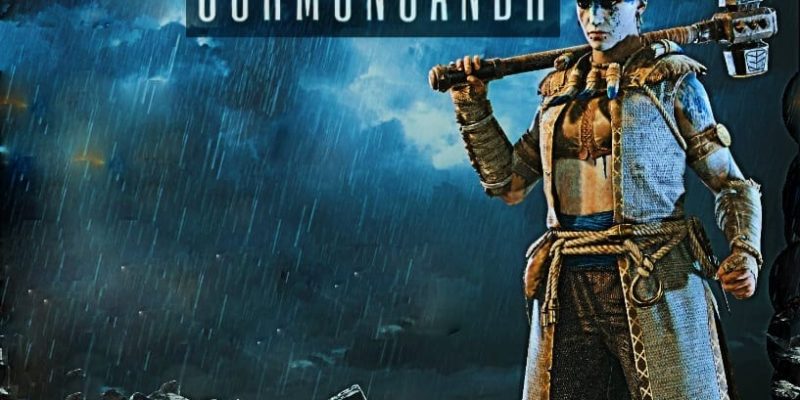 Year three of For Honor has seen some seriously stacked heroes. From the dark knight, Black Prior, to the crazed ax-wielding Hitokiri, the new roster is looking pretty menacing so far. As of this week, we got to take a detailed look into Jormungandr, the new hero that the devs have been teasing. Wielding a fearsome war hammer and donned in Shaman-like warpaint, this is For Honor‘s third new heavy hero. It seems like the devs at Ubisoft are really branching out this year, with new moves, concepts, and mix-ups galore. The newest Viking-themed hero to the roster is no exception to this rule. This August, the Ragnarök-worshipping Jormungandr thunders into the fray.

The story behind the Jormungandr features, interestingly enough, two different tales. The first features Hulda, the female version of the hero. In the original Viking village, a group of Norsemen sought shelter in a temple of the Nordic deity of the same name. In this temple, they feigned worship of the World Serpent, Jörmungandr. Hulda, the temple leader, became enraged upon discovering this, deeming the men as weak heathens. In her wrath, she slaughtered them all mercilessly. Afterward, a massive wave crashed into the temple, washing all of the bodies away. She took this as a sign that her place is not in a temple, but on the battlefield. She took up her mighty war hammer immediately afterward and joined the Viking war.

The story of Hulda’s male counterpart, Gretar, is somewhat different. Originally a regular Viking raider, Gretar forsook his old ways and joined the cult to help cull the weak. The Jormungandr aim to leave only the strongest standing in preparation for Ragnarök. 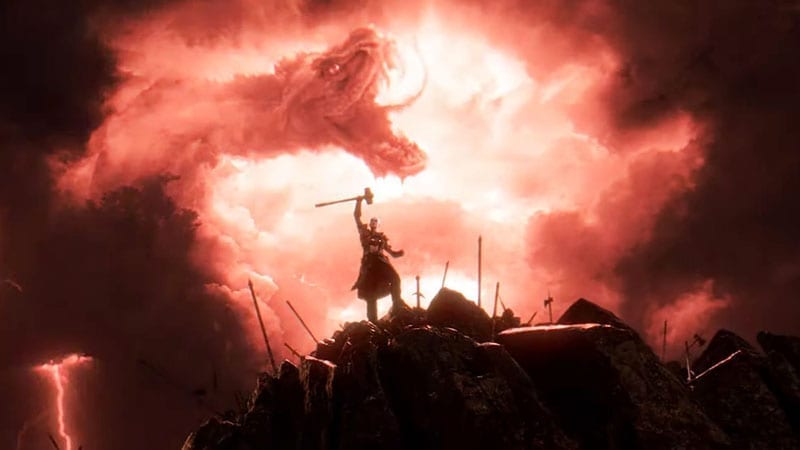 The Jormungandr, featuring Hulda and Gretar, aim to purge the world before the Norse apocalypse transpires.

Those are the exact words of For Honor’s developers when asked to describe this new hero in three words. In more detail, Jormungandr is intended to put a significant amount of pressure on opponents, especially when out of stamina. Further complicating this matter is a move set intended to drain considerable stamina as well. This new heavy, officially the game’s 25th hero, operates in a similar way to Centurion. Hulda and Gretar will be looking to render their opponents out of stamina, knock them off balance, and land huge damage. Jormungandr also has the most stamina out of all the heavy heroes, and the third-highest in the game. This Viking comes with an interesting kit; that’s for sure. 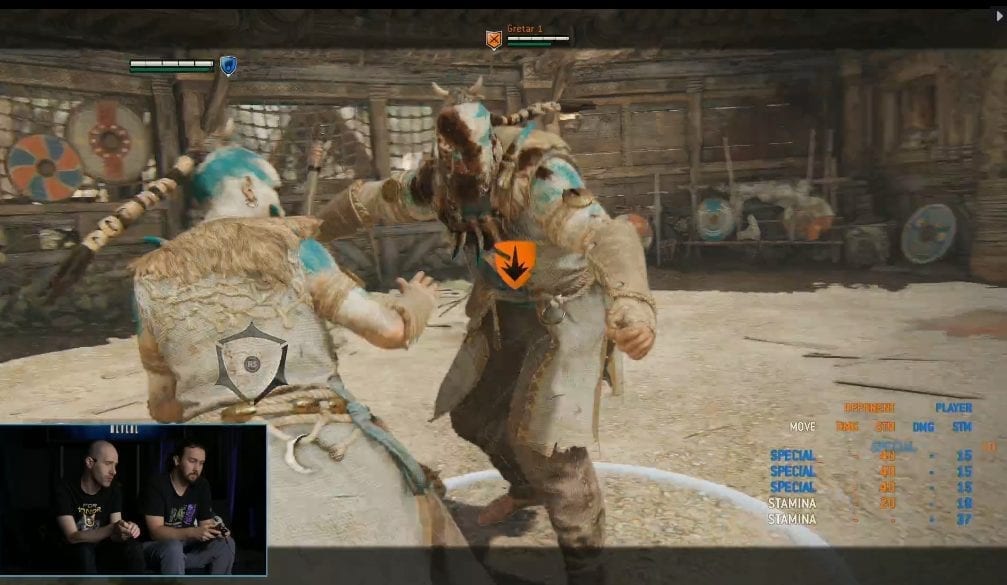 For Honor‘s devs certainly gave us quite a show. Hulda has an impressive array of pressure and stamina drain at her disposal.

No stopping this hammer time

Jormungandr has undodgeable light attack finishers, as well as unblockable heavy finishers. This hero also has hyper armor on all heavy attacks, which will make trading with Hulda or Gretar a real way to get… nailed? The new hero also has a forward dodge heavy attack with hyper armor, which he or she can feint. One other rather daunting ability is Jormungandr’s parry and guard break follow-ups dealing extra stamina damage in addition to confirming a light attack.

Ready for the real kicker? The hammer hero also has a bash attack that drains a sizeable amount of stamina. On top of that, this bash (as well as all unblockable heavy attacks) knocks opponents down when they’re out of stamina. To top it all off, once the enemy’s on the ground, Jormungandr can unleash a devastating hammer attack for big damage. We haven’t even gotten to the feats yet, either. 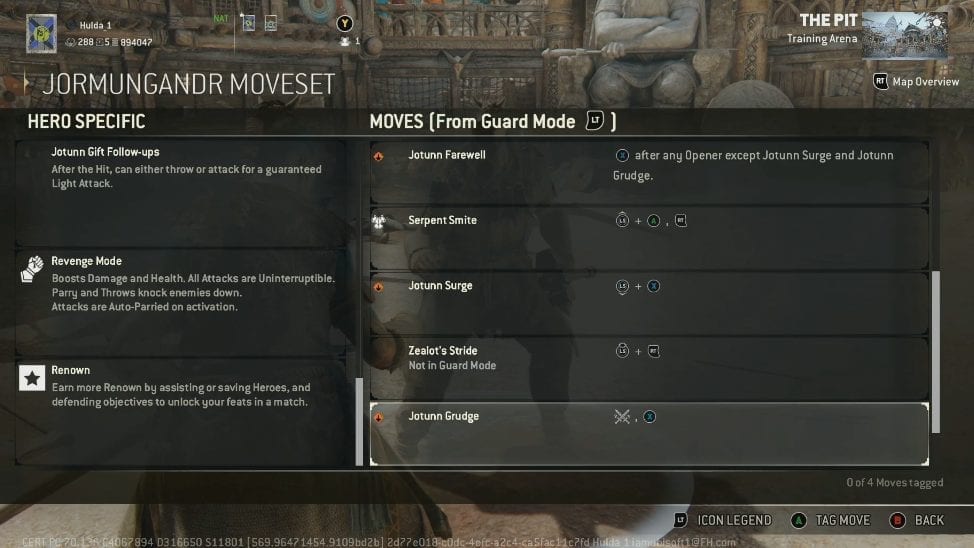 With Jormungandr’s hyper armor, stamina attacks, and undodgeable attacks, players looking to best the hero will have their work cut out for them. Well, maybe “smashed” is more applicable.

While Jormy’s move set is impressive enough in and of itself, For Honor‘s most popular game mode is still of the 4v4 flavor. The one table-turning aspect of these modes has always been the feats. This is another area where this hero looks to maul the competition. The devs’ intentions with these feats are two-fold, aiming to both improve longevity and also open up opportunities for the impressive hammer slam that players will be looking to land as Jormungandr.

The first feat this hero gains access to will heal him or her every time a bash is landed. The second confers a 60 HP shield upon successfully landing a hammer slam. The third feat is a significantly fast projectile that puts the opponent out of stamina. The final feat, the aptly-named Twilight of the Gods, deals a nasty area-of-effect and knocks opponents down. This allows for Jormungandr to land a hammer slam. The brilliance in many of these feats is how they complement one another, allowing this Viking to really get into the… swing of things. 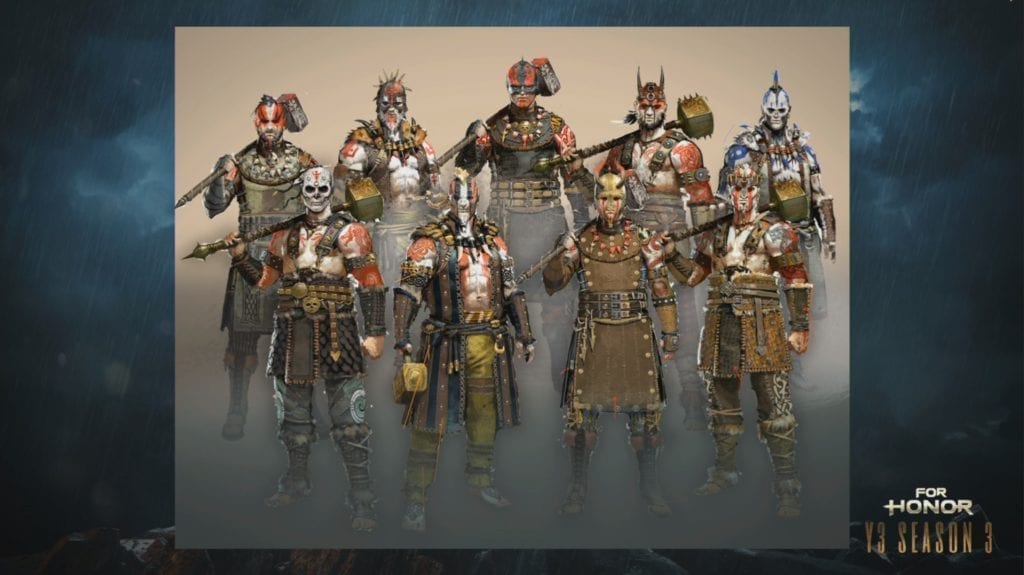 This hero has a pretty menacing look, almost combining the aesthetics of more traditional Viking heroes and the Pictish Shaman.

Aesthetics are a big deal in For Honor. Given how gorgeous the game is and how great the characters in it are to look upon, it’s understandable. Jormungandr sports a variety of different looks, but most of them involve face paint and cool hairstyles. Think Floki from Vikings, in fact, in every single way. Different masks, helmets, makeup options, and armor make this a very diverse-looking hero.

A really nice touch in this hero comes from the very clearly Loki-inspired helmet as one of the hero’s looks. Loki, being the World Serpent’s father, would obviously influence his disciples. The different hammer types look great as well, in typical For Honor fashion. The early level ones are rather humble, while the higher-tier ones look like something out of a superhero movie. If you thought Shaman screamed “religious fanatic,” you’ve seen nothing, yet.

Buying the Year 3 Pass will not only allow players to access Jormungandr eight days early but also unlocks all of the previous new heroes this year has to offer. You can purchase the pass on Steam or via Ubisoft’s very own client, Uplay. How’s the new hero look to you? Will you play Jormungandr this season? Let us know in the comments!

Battalion 1944 new roadmap paves the away for esports investment