Welcome to PC Invasion’s live updates page for The Game Awards 2017. Anything pertaining to the PC which is announced tonight will be noted below. Refresh the page for the latest updates. Or, if you’re here after the awards have concluded, just read on to see what happened.

We’ll be getting a map reveal for Battlegrounds, a new Fortnite mode announcement, something from THQ Nordic, and probably a whole lot more. If you believe the more exotic rumours, we might see Devil May Cry 5 or something. Let’s find out, eh?

I’ll drop in any award winners as they occur too. This event has a habit of quietly giving out awards offstage though, so apologies in advance if I miss a couple. All time stamps are in PST.

5:40pm – The pre-show is under way. Geoff Keighley is chatting with Kyle Bosman about the awards themselves. Not a whole lot to report so far. Keighley has threatened to show up on forums tomorrow and reply to people who said “X is never going to happen tonight!” Even with the show in progress, he can’t help building hype. He’s just programmed that way. 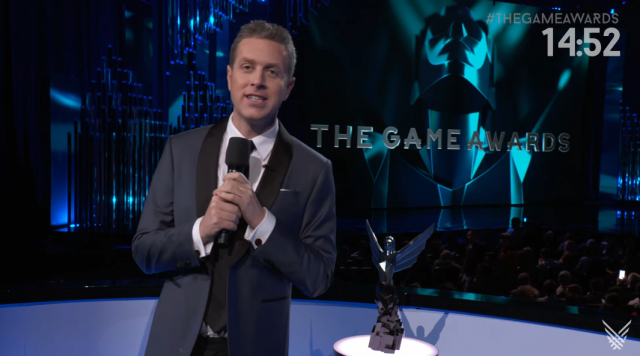 5:47pm -Saber Interactive (Quake Champions) are making a World War Z game, announced with a trailer. It’s “coming soon”. It has zombie hordes in it, as you’d probably guess.

5:50pm – Your ‘Trending Gamer’ is a chap called Dr DisRespect. I’m too old to know who that is, but I’m fairly sure he is not a qualified medical practitioner. He has good facial hair.

5:52pm – Vacation Simulator is announced by Owlchemy Labs (Job Simulator). Like that prior game, it’s a VR title.

6:00pm – IT IS A FROM SOFTWARE TEASE. A very, very short trailer for something called (maybe? might be a tagline), Shadows Die Twice. Trailer to come when I find it. No platform confirmation, no schedule. Holding out hope for a PC version at this stage, obviously. If it’s a Bloodborne sequel, then that probably won’t happen alas. From games featuring ‘shadows’ – Shadow Tower, and, er, Tenchu: Shadow Assassins.

6:07pm – Best Narrative time. And the winner is What Remains of Edith Finch.

6:11pm – Announcement ahoy. Campo Santo are making In The Valley of the Gods, a single player, first-person adventure title. Explore a remote valley in Egypt, in search of treasure, fame, fortune, and not dying. Coming in 2019. So not for a while.

6:15pm – Best Action Game is bursting through the wall and disarming several enemies at once before riding away on a motorbike. The winner is Wolfenstein 2: The New Colossus.

6:19pm – First mention of Hideo Kojima from Geoff. Surely not the last.

6:23pm – Second Kojima mention, as we get a trailer for a film called The Shape of Water (director by Guillermo Del Toro). Kojima loves it, apparently.

6:32pm – Bit of a PC break here, because it’s Zelda: Breath of the Wild DLC stuff going on at the moment. Tim is trying to get a #thegameawardsfashion movement going on Twitter. I support this venture.

Del Toro is rocking an "I'm too famous to dress up for you" look, which works because he's Guillermo del fuckin' Toro. Kojima is in an unfortunate blazer/t-shirt combo, though that's kinda his established style, so… #TheGameAwardsFashion

Also can we PLEASE STOP WITH THE BLAZER/T-SHIRT COMBINATIONS GUYS, SERIOUSLY. #TheGameAwardsFashion

6:40pm – It is the Industry Icon Award! The icon of industrious industry is Atari/Activision’s Carol Shaw, programmer of River Raid. Gaming history here, everyone.

I'll refrain from judging the fashion in Soulcalibur VI until it's actually out, but this is clearly going to be the most important thing about it. #TheGameAwardsFashion

6:59pm – Fortnite is bringing a 50v50 mode to their Battle Royale. It’s apparently available right now, if you can drag yourself away from The Game Awards 2017.

7:01pm – An award for Best Ongoing Game. The games that just go on, and on, and on … Big cheers from the crowd for Overwatch. Which, as it turns out, is the winner. They’ve apparently won Best eSports Game too, according to the voiceover.

7:06pm – Words like violence, Fade to Silence. Well, close enough. It’s THQ Nordic’s Fade to Silence, revealed a bit earlier in the day. It’s a survival game, out next week on Early Access.

7:13pm – A quiet time for PC games at The Game Awards. Lots of adverts, followed by a Nintendo announcement. Let’s see how Tim’s doing.

7:16pm – Bayonetta 3 is revealed! I mean, that’s prrrrobably not ever coming to the PC (it’s Switch exclusive), but I’d have said that about the first one once upon a time.

7:21pm – It’s Death Stranding trailer time. Kojima’s strange and fabulous project appears to be PlayStation exclusive at the moment, so definitely no guarantees of a PC version there.

7:27pm – Norman Reedus has a baby incubating inside his nostril. Just Kojima things.

7:40pm – It’s a Best Student Project award! Level Squared is the champion. “Please hire me, someone,” says the creator, echoing job instability for the 20-30something crowd everywhere.

7:42pm – The Astronauts reveal Witchfire, a first person shooter. No release schedule for this one, far as I could see.

7:45pm – Geoff finally manages to convince Josef to let him show the trailer for A Way Out.

7:48pm – The Rock is here (well, not live, but via video) to say some things about Jumanji 2 and complain about old reviews of Spy Hunter.

7:56pm – Another quiet period, PC-wise. We’ve got … a Battlegrounds map reveal to come. Plus some more awards, if Geoff lets them actually appear on stage. Andrew House (of Sony) is here.

Andrew House appears to be wearing the exact same thing he wears at every press conference. I'm beginning to suspect that's actually his skin and not a suit. #TheGameAwardsFashion

8:00pm – Andrew House is going to announce the winner of the Games for Impact Award. The winner there is Hellblade: Senua’s Sacrifice. They’ve also got Best Audio Design as a bonus, it seems.

8:09pm – Andy Serkis is here to dramatically rip open the envelope for Best Performance. It’s Melina Juergens for portraying Senua in Hellblade! Only just up on stage and now back there again.

Melina Juergens wearing something a little out there. I like it. Also, very deserved win. #TheGameAwardsFashion

8:19pm – Ed Boon steps up for Best Game Direction. It’s won by Legend of Zelda: Not on PC. They get Best Action-Adventure too.

8:23pm – Have to say, The Game Awards have brought some proper game reveals this evening. After almost three hours though, this is seriously starting to drag.

8:24pm – A new trailer for Metro Exodus, a game first sighted at E3 earlier this year. I’ll put that up when it shows up online.

8:30pm – Thanks to The Game Awards sponsorship barrage, I’m ready to never use Ebay ever again.

8:36pm – The Game Awards 2017 Game of the Year award is about to happen. The lone PC representative here is Battlegrounds.