Back in the good old days much of my time was spent in airport lounges which usually featured a couple of arcade cabinets, and the two games that excited me most were Super Sprint and Gauntlet. Many, many coins were pumped into these over the years. With the advent of home entertainment systems it made perfect sense to reboot Gauntlet but sadly it’s an IP that’s not always lived up to expectations when given facelift.

Brought to you by Arrowhead, the creators of the excellent Magicka series, there’s now a new updated version of the classic, featuring the four loveable dungeon crawlers of yesteryear: Warrior (Thor), Valkyrie (Thyra), Wizard (Merlin) or Elf (Questor). The red, green, blue and yellow characters once again head into the depths to take out hordes of never ending bad guys.

Our intrepid heroes try to work as a team.

Gauntlet players will take to this latest version with ease. There’s the familiar tank-like classes of the Warrior with his smashing hammer and Valkyrie with her throwing shield and lance. Then there’s the ranged classes of the Wizard with fire, ice and lightning, and Elf with his arrows and bombs. The latter needing a little more skill in battle.

Of the four characters the Wizard is definitely the hardest to get to grips with because Arrowhead has taken a similar spell casting route to Magicka, with button combo presses to activate the different skills. I’ll admit I struggled with the Wizard for a while, having to double press keys to switch from fire to ice or a combination to activate other effects such as a shield. With nine skills to remember the combinations for it can be tricky. They’re also hard to master quickly because this game is really fast paced. As it should be.

Controlling the characters is easy enough with the WASD and mouse combo, using the mouse to aim for Elf and Wizard and control ability directions. I was tempted to grab a controller at one point but after a few games it all fell in to place. Dodged a bullet there, I would never hear the end of it from the other IncGamers team members if I had used a controller.

On entering the game there’s a series of dungeon entrances illuminated behind the hooded vendor statue thing, and on entering these magical gateways the game proper begins. Each entrance features a three level dungeon and each dungeon entrance will have the same dungeon layout behind it. While this may sound a bit dull, some of the challenges will test a player’s ability to the max. Shooting, dodging, knowing when to take or leave food for your teammates; it all happens at a frantic pace.

While there’s the temptation to stick to playing one class it’s advisable to play and level them all, because there can only be one of each class in a four player game. That proved a problem for me because I love Elf and if I got stuck with the Wizard I was more than likely going to let the rest of the team down terribly. Just be prepared to practice with the ranged characters as much as possible.

Arrowhead has added slightly more depth to the Gauntlet experience with upgrades which can be picked up from the main hub. The vendor stands there waiting to take your orders which can include additional rune/relic abilities which can be slotted into two separate rune slots. There’s also cosmetic gear to acquire, but none of this is going to be available unless there’s an adequate amount of gold picked up while dashing through the dungeon.

Then there are the Masteries; achievements for doing certain things while playing, such as dying a lot (hey, it’s still an achievement,) using certain moves more than others, taking more damage and so on. All of these will boost the character in some way, whether it be reduced skill cooldowns or more damage on a specific monster type. There’s no control over the character progression with the Masteries. They just happen as you play, so you don’t have to think about them. Some may see this as an issue but Gauntlet was never really about character builds, it’s about shooting stuff and blasting through dungeons. If you want to mess about with builds go play Diablo or something.

The level layouts are nicely done with locked doors, destructible walls, traps, and push puzzles on a variety of different tile sets. It’s a linear romp through each of these levels and after a few rounds of a specific dungeon they can be learned, removing the surprise of a specific boss, puzzle or traps. This predictability may annoy some players but it’s not really an issue if playing in a group because encounters will play out quite differently depending on how well the group can work together.

To spice things up there are situations that can occur such as Death chasing you through a dungeon. If Death touches a player they instantly die, so the object is to get through the dungeon as fast as possible as Death continues to spawn as you progress. It’s additions like that that keep pulling me back into the game for another round. 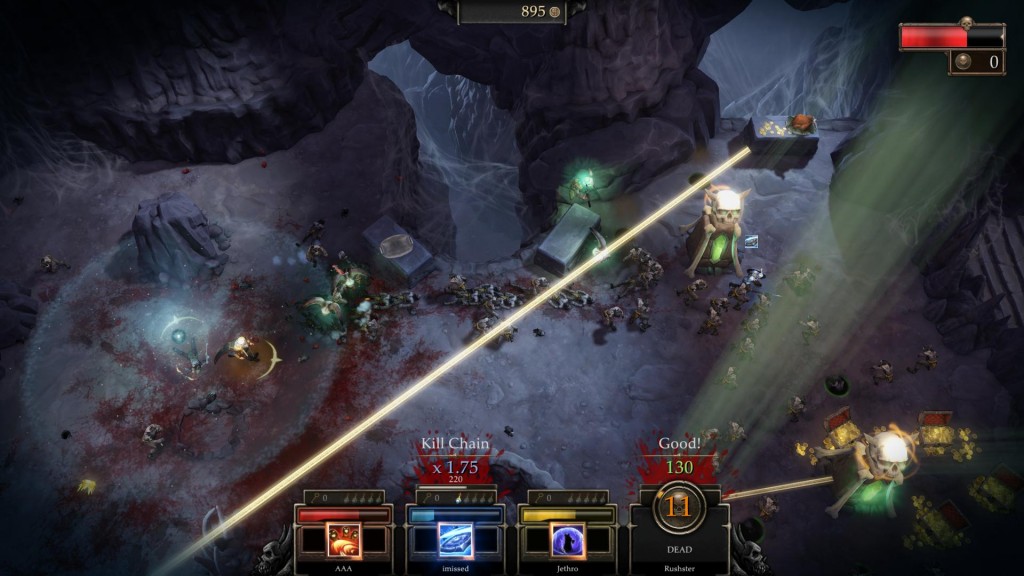 Speaking of rounds, there are no 100 level dungeons here. Each doorway starts a three level crawl and once that’s complete players return to the hub and the vendor. If any changes to Runes are made at the vendor then the team continues on through another portal, for another round, as a group.

Splitting the dungeons into groups of three levels give the team time for a welcome breather.

If you watch any footage of the original Gauntlet now it (depending on your retro-tolerance) doesn’t necessarily look great. Arrowhead has managed to take the essence of the original and bring it up to speed in a reasonably impressive fashion. Sensibly, they have kept in some of the more familiar audio to make oldies such as myself feel all nostalgic. This works well and doesn’t feel too forced. Even the character quips are what you’d expect.

The game looks good too, though there are a few issues with the camera angles on occasions, and the actual small size of the characters can be frustrating at times. In a four player game it can be hard to spot your character when it’s all kicking off. On more than a few occasions I would be muttering “Where the fuck am I?” When this does happen it’s best to retreat and then refocus on the action. Though that’s easier said than done when you’re being swarmed by thousands of spider hatchlings.

Gauntlet is really designed for co-operative teams of players, and Arrowhead have made the matchmaking system so straightforward that you can get a game up and running with other people in a matter of seconds. Pick a difficulty, then a class and off you go. There are occasional matchmaking error messages, but a quick re-click of the join button usually get the game up and running. While the game can be played solo as well, I attempted this a few times and it wasn’t nearly as fun.

All the loots! To be shared or not.

When I first started playing Gauntlet I was in two minds as to whether it would keep me hooked, but I have to concede that I’m now thoroughly enjoying the game. If you love ARPGs and all the character customisation guff that comes with them then Gauntlet is (despite appearances) not really a game for you. If, on the other hand, you enjoyed the original, or simply love running through dungeons very quickly with a group of other players, then Gauntlet is definitely worth your attention for the price of £14.99.

One vital tip before I leave: Do not shoot the food!