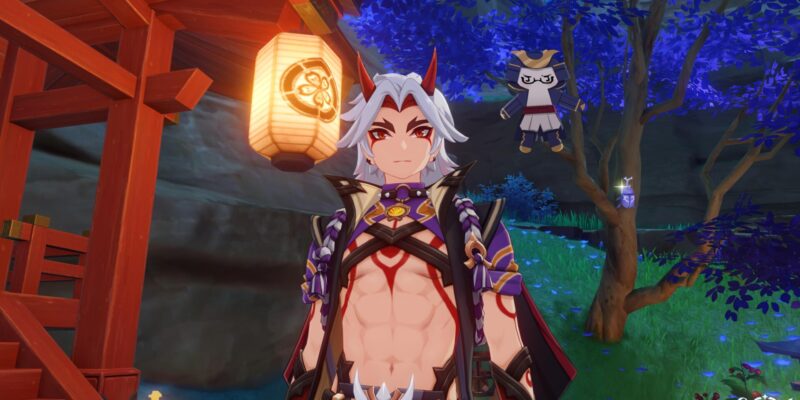 Arataki Itto has joined Genshin Impact‘s roster. Now, you’ll be able to make use of those Onikabuto materials that you’ve seen everywhere. Here’s our Genshin Impact Onikabuto farming locations guide to help you obtain this item for Arataki Itto’s ascension.

Note: For more information about the game, check out our Genshin Impact guides and features hub. Likewise, you can take a look at our character build guide for Arataki Itto.

Compared to most other ascension materials you’ll see in Genshin Impact, the Onikabuto for Arataki Itto can be found on several of Inazuma’s islands. The only problem is that these beetles are fairly hard to see, as they tend to grow on trees or cling onto cliffsides.

Below, you’ll see the Onikabuto farming locations on Narukami Island. To the north, the vast majority can be found on the cliffs of the Grand Narukami Shrine, as well as the pit below Mount Yougou. However, you do need to complete the Sacred Sakura Cleansing Ritual quest chain to gain access to some of these areas.

To the south, you can check the cave under Inazuma City. You’ll find six here that are close to each other. Lastly, further to the northeast, there’s a cavern with three more beetles.

Onikabuto in the caves underneath Inazuma City

Onikabuto in the Kamisato Shrine cavern

For Kannazuka, you’ll want to remember that those above ground tend to be found on trees, including Thunder Sakura (i.e., the larger trees that cause lightning strikes). A few might also be enclosed in Thunder Barriers, so make sure you pick up the Electrograna buff.

Speaking of the Electrograna buff, you’ll need this for some spots that are in the middle of Tatarasuna (where you did the Tatara Tales quest chain).

For the northern section of Yashiori Island (i.e., Higi Village), the Onikabuto farming locations are seen on the spiky branches protruding from the ravine. To the south and east, several can be picked up near trees and dragon bones.

Lastly, Seirai Island only has a handful of Onikabuto farming locations, so it’s up to you if you want to go there. Just be sure to complete the Seirai Stormchasers quest chain or you’ll have to deal with constant lightning strikes.