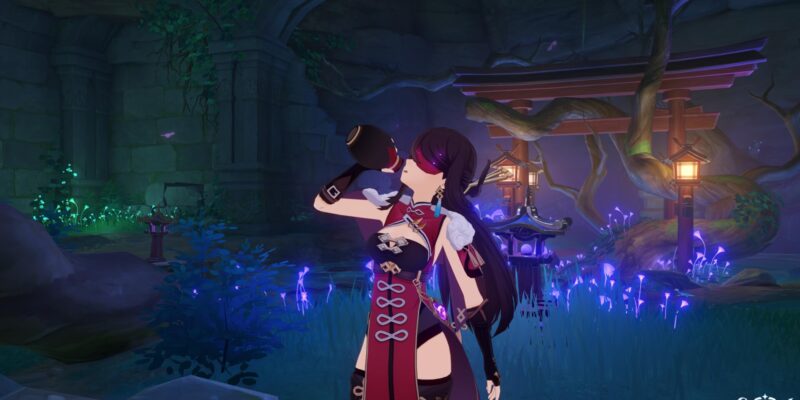 There are a few secrets that we can discover if we check out the sides. But, we’ll talk about these later. For now, let’s just focus on the main chamber and the ritual area.

There’s a Thunder Barrier here that you can pass through, but you need to be under the effects of Electrograna. Use the Memento Lens on a nearby Earth Kitsune statue and it’ll reveal a Thunder Sakura Bough.

Interact with it so you can pass through the barrier. Smack the fox statue with an Electro ability to obtain the Scroll-Shaped Ward. 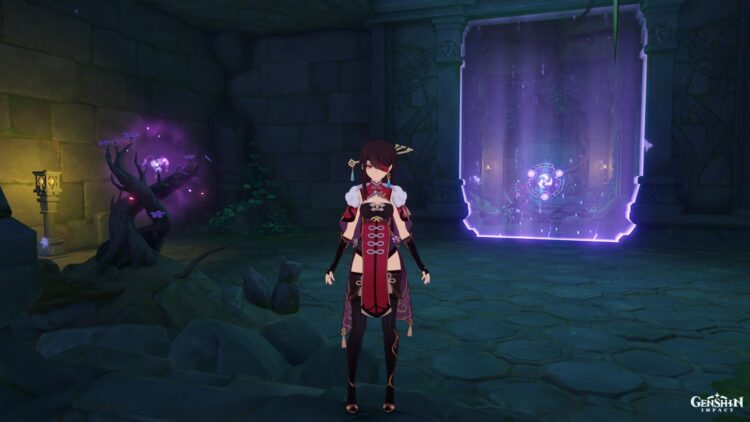 Next, take a look at the decayed shrine in front of you. There are two more Earth Kitsune Statues to the left and right.

Use the Memento Lens to reveal the switches that you need for the puzzle. 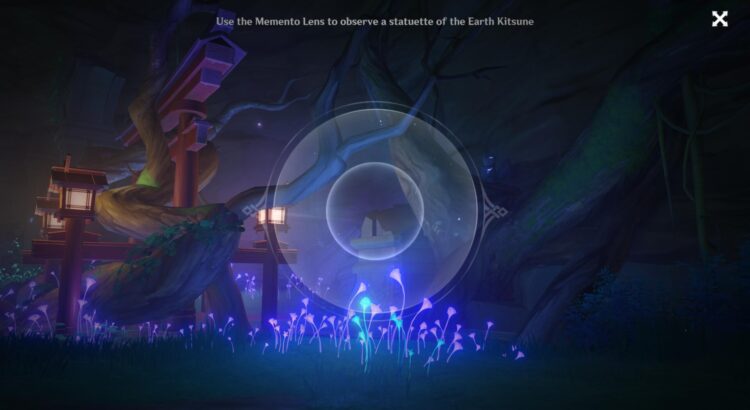 Check the main switch (the one with “pray”) and you’ll notice that it’s marked as “1” (i.e., a symbol with only one sharp point). Based on its relative location, we can do the following:

Activate the main switch to pray and it’ll spawn a tougher Nobushi samurai mob. Defeat this enemy and you’ll complete Genshin Impact‘s Araumi Sacred Sakura Cleansing Ritual. However, we’re not done yet. We can check out a few more secrets found at the side chambers. 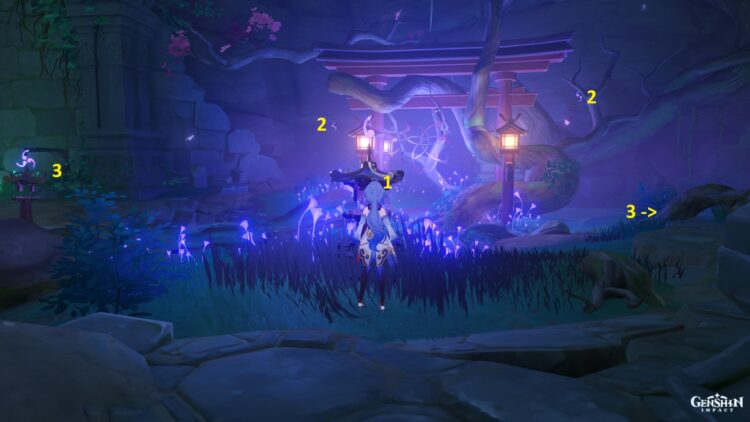 Uncovering a few secrets and completing some puzzles

To your right (while facing the shrine), you’ll find a floating Seelie and an Earth Kitsune Statue.

The Seelie can be coaxed to one of the pedestals. The other Seelie, meanwhile, is on the left-hand side. You’ll need to nudge it until it reaches its own pedestal. This will open a circular doorway that leads further down to a submerged area. 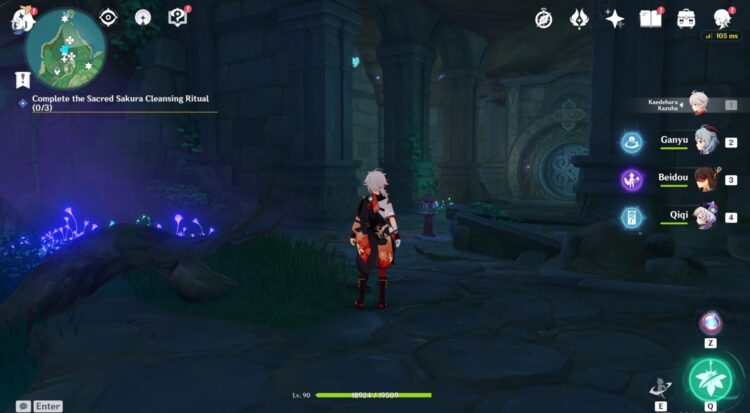 Before we go exploring, go back to the left-hand side where you found the other Seelie. There’s another Earth Kitsune Statue here for the Memento Lens. Likewise, there’s an Electro Block puzzle.

The central block is your cue since it can’t be moved. The rest, meanwhile, will rotate along with the ones that are adjacent to them. Mind you, the Electro rune has to be facing the wall with the Earth Kitsune. A bit of trial-and-error is involved, but you should be able to manage. Once all runes are facing towards the correct spot, a treasure chest will spawn. 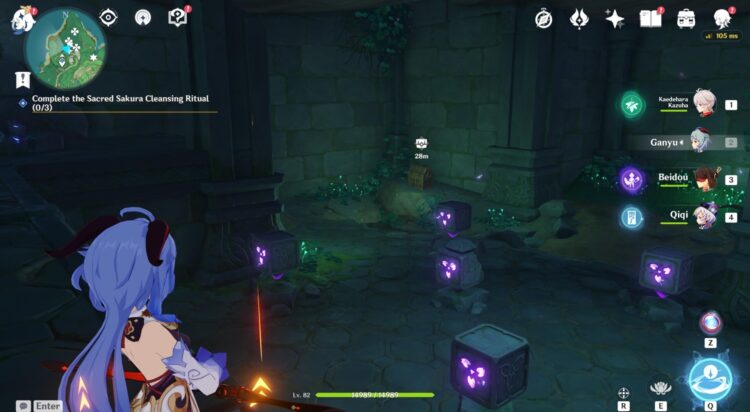 Next, let’s go down to the submerged area. Swim around until you reach an incline that has five Electro Blocks forming a straight line. The goal here is to shoot them until the blank faces of the blocks are facing you.

Once you’re able to do this, a treasure chest will spawn. Likewise, you’ll see that the water has been drained. Oh, and if you look to the right, there’s a dirt pile with an Old Stone Slate that you can pick up. 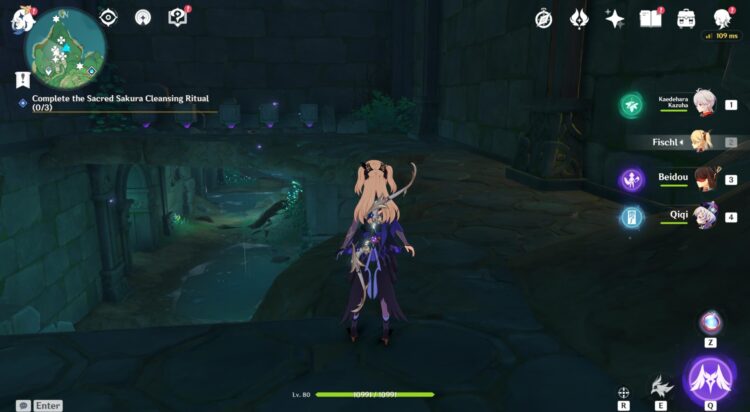 Check out the new area which has several rooms. One has a Thunder Sakura Bough and another has an Electroculi behind a Thunder Barrier. Unfortunately, you won’t be able to pass through it if your Electrograna level is still too low. You’ll have to increase your Sacred Sakura favor to unlock new perks. Just enter the smaller room and take out the two Ruin Guards to obtain a chest.

Anyway, one of the passages here has several Ruin Sentinel bots. But, it also leads to what we’re looking for. Let’s go to the next part of our Genshin Impact guide to finally unlock the underwater teleporter and domain. 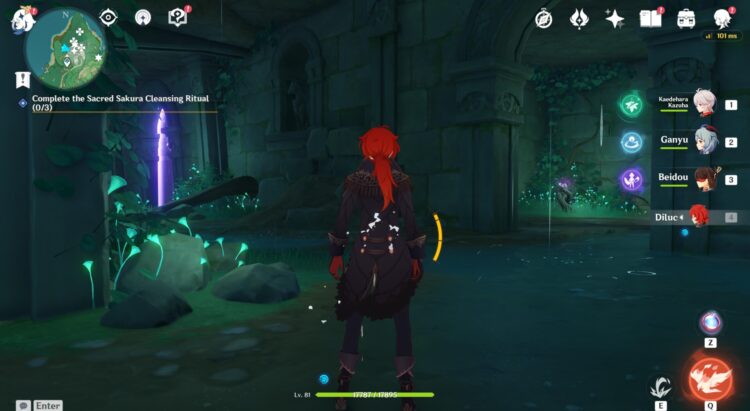