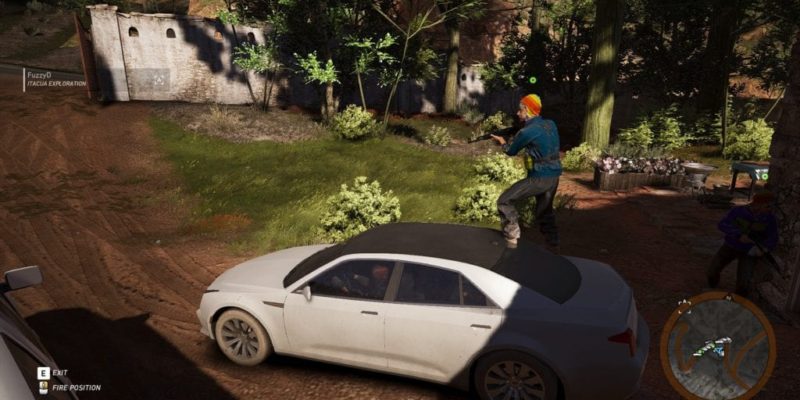 The success of Netflix’s Narcos has laid fertile ground in which Ubisoft’s DEA-and-Black-Ops-Buddies may flourish. But judging by this closed beta Ghost Recon: Wildlands won’t be dwelling too long on the moral complexities of geopolitics or peering at the human side of its subjects. Much like The Division, Wildlands seems to be going Full Clancy with its fetishisation of extra-judicial military types. That might matter more, were it not for the fact that Ghost Recon: Wildlands is also quite self-evidently goofy.

My Black Ops agent roamed around Bolivia wearing an eyepatch, a shirt straight out of a Pacific Northwest coffee house, and a backpack decorated with some colourful skull stickers. Aside from light tactical operations, she specialises in physics-defying, off-road drives directly up and down the sides of mountains. Why follow the rules of the road when you can just head for the objective marker as the crow flies? 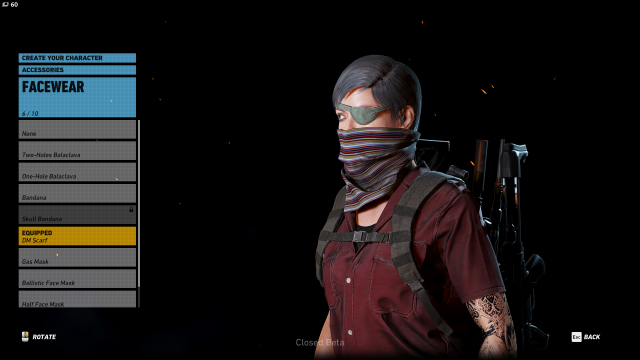 Little of this, by the way, should necessarily be considered a bad thing. I’m thankful that some of the slapstick gameplay from Just Cause 2 has made it into Wildlands. Both because Just Cause 2 was tremendous, and because it helps to dilute any notion that a Tom Clancy branded plot should be considered at all credible. There’s no magical grappling hook here (at least, not in the beta – fingers crossed eh?), but you’ll see plenty of chaotic car pile-ups, instigate rebel-on-bad-men violence, and, if you so wish, careen off a cliff on a motorcycle.

Ghost Recon: Wildlands also appears to share similar forested, mountainous terrain with Avalanche’s classic (albeit South American, rather than pretend Asian-Pacific island, in nature). As one of a group of four hardy Ghosts, it’s up to you to end the Santa Blanca cartel’s grip on Bolivia by systematically dismantling its chain of command. While you’re there, you may as well encourage a local rebel group to overthrow the government too.

A typical mission finds you grabbing a nearby vehicle (be that one parked outside a safe house, or a ‘commandeered’ ride), taking a very loose and swervy drive, and disembarking near the outpost, military base, or drug den of your interest. It’s then advisable to send in your remote controlled drone to scout the place out and mark up as many targets as possible. With multiple human players, it’s theoretically possible to formulate a plan that involves flanking, or multiple prongs of attack. In single player you don’t really have that luxury because the AI squad are much more limited in their abilities. 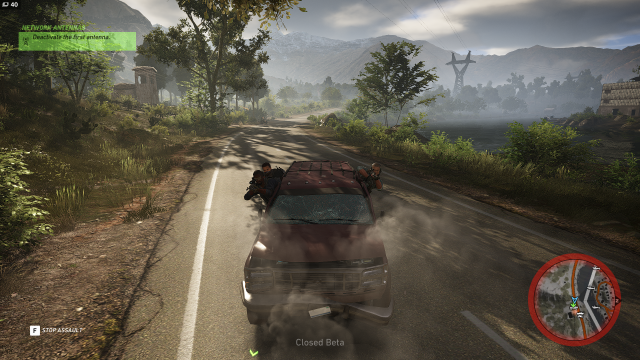 They’re okay at looking menacing when leaning out of a vehicle though.

You can order the AI (as a squad) to move to a designated location, form up on you, hold a spot, or open fire. They can also co-ordinate shots based on a pair of marked targets (something you can employ to useful effect with your multiplayer co-op comrades too). It feels like enough to get by, especially in these early beta missions, but the tactical aspects are definitely on the lighter side. Maybe that changes later. The beta area was rated ‘1/5 skulls’ in difficulty, so there will evidently be greater impediments to your team further into the game, and solo players will presumably need squad options to deal with that.

For now, it feels like there’s much more flexibility of approach with fellow co-op agents, who, if they can avoid the temptation of crashing helicopters into things, can cleverly co-ordinate assaults. A pair of men could get inside a compound by driving a ‘friendly’ faction truck, for example, while another takes out sentry snipers, and a fourth frees some friendly rebels. Ghost Recon: Wildlands isn’t going to best the older Rainbow Six games for tactical play by any means, but the Just Cause/Far Cry like freedom in how bases can be attacked should make for some rewarding co-op play.

It’s not bad in single player either, where flawlessly pulling off a mission means getting your desired intel without a soul noticing (because most of them now have a fatal head wound). Of course you can also pull things off less than flawlessly too, alerting every narco in the local area, along with Unidad; the paramilitary ‘police’ equivalent in this version of Bolivia. 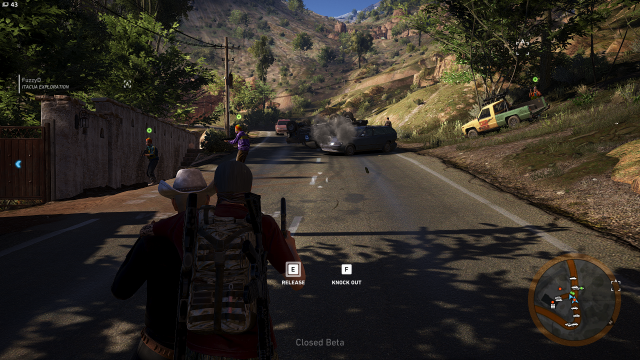 Everything’s fine here. Nothing to see.

A few mission types were on offer in the beta. As well as ‘attack this base and retrieve a thing’, there were ‘defend this point against attackers’ (always a bit boring, to be honest), and side missions that involved ramming convoys off the road in order to secure supplies, nabbing people with info (showing you useful points on the map), and aiding the rebels by activating transmitters. Doing tasks for the rebels has an additional benefit; the ability to call in back-up, or launch a mortar attack, or get a vehicle dropped off for you. Handy stuff.

As you partake in bumping off every single person in Bolivia who ever even thought about drugs, your agent levels up. Advancing in talent requires resources (found around missions and other points of interest) as well as pure skill points, which is a relatively neat way of making said resources worth seeking out. New guns and equipment appear to be unlocked by finding them out in the field too, further encouraging a tour of your map icons (or side-mission shake-downs).

It’s hard to say what period of development this beta was from; it didn’t actually wall off any areas, but those outside the beta area were clearly not complete. The game comes out in early March, so the title must, internally at least, be finished by now. 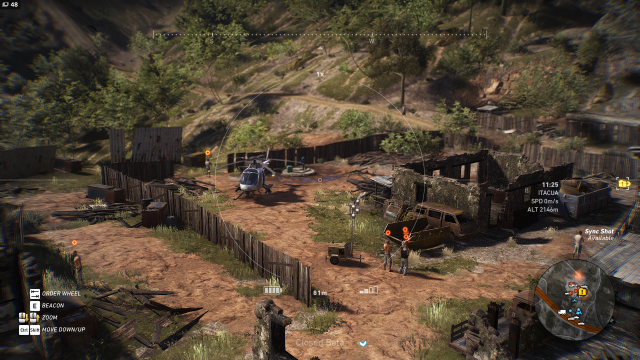 I spy, with my flying eye, a fair bit of trouble.

Overall performance on this PC (i5-6600 / 16GB RAM / 4GB 380X) was roughly what I’d have expected for a 2017 Ubisoft open world game: 40-50fps on the Medium preset. Not outstanding, yet not unworkable either. I have, though, seen people with much sturdier machines complaining about poor performance.

The benchmark scared me by offering about 20fps on the lowest possible settings, but that happily proved to be way off the mark. I played throughout on keyboard and mouse, which worked fine (and the possibility of rebinding keys exists for any awkward defaults). Aiming was a little stiff, but better than the gamepad alternative. Again, I’ve seen other people complaining much more vociferously about clunky controls. The animations certainly aren’t Metal Gear Solid V caliber (what is?), but I’m not sure I found them all that terrible. Nothing I could do would make any of the cars steer properly, mind you. They all seem to have an in-built desire to cause carnage by swerving all over the shop.

Having played Ghost Recon: Wildlands for a few hours in both single player and with Ace Chopper Pilot And Magnet For Bolivian Road Rage Tim McDonald, it feels like it has potential. That’s particularly true of co-op, where there’s scope for either taking it as a serious sandbox for tactical operations, or as a gigantic piss about.

The Clancy-heavy narrative tone may not win too many friends (particularly in actual Bolivia, where I have to wonder what they’re making of all this), but that’s easier to tune out when 90 percent of your play time will be spent infiltrating outposts with fellow agents, or attempting to base jump from helicopters on top of convoys. Longevity of interest is still a doubt, however. There was plenty to sustain a weekend beta period, but I’m unsure whether those same activities can comfortably stretch across a full, open world game’s length.