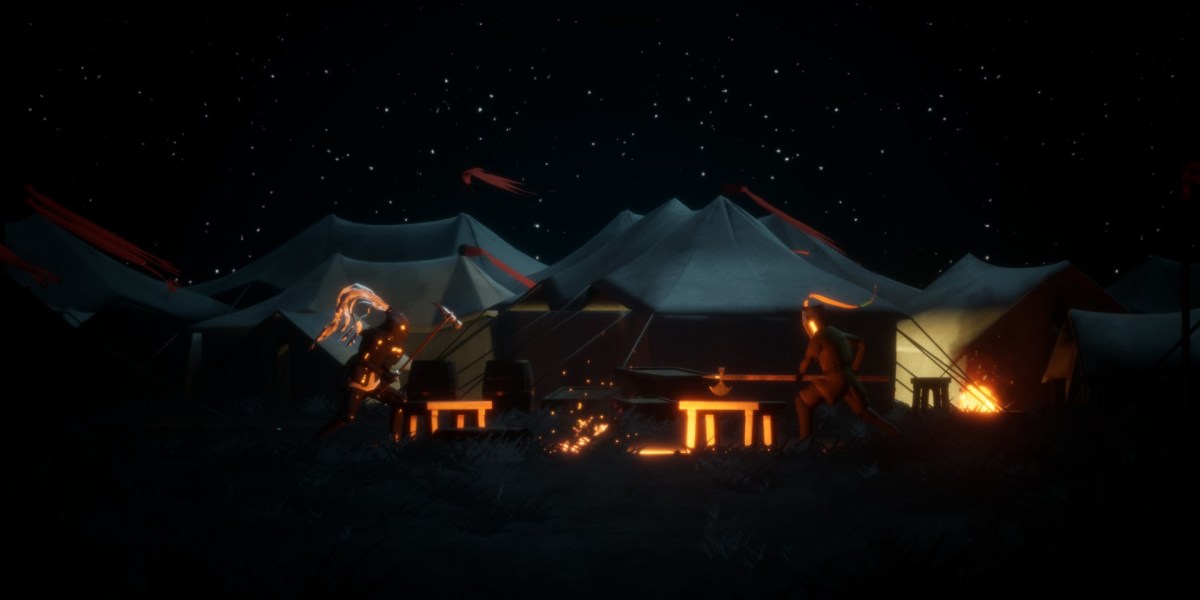 These past few weeks, I’ve been beating the summer heat with a friggin’ mace, thanks to Griefhelm, a new indie fighting game from Johnny Dale Lonack and released by Thorrnet Publishing. The premise is simple enough: knights are gonna fight. Griefhelm is all about heavy, metal-clad warriors bashing, slicing, and skewering each other with other bits of metal.

The game evokes the frantic action of Nidhogg, but with the more down-to-earth grit and ‘realistic’ combat of For Honor and Mordhau. And it’s great fun — up to a certain sharpened point.

Griefhelm nails its artistic direction, and if you’re a fan of knightly weapons and armor, there’s a lot to love here. The game eschews fantasy aspects in favor of historical designs, so fellow medieval history nerds can enjoy dressing up their knights according to their favorite period styles. Some excellent lighting and shadow effects show off the glint of steel and the threatening silhouettes of the armored figures. 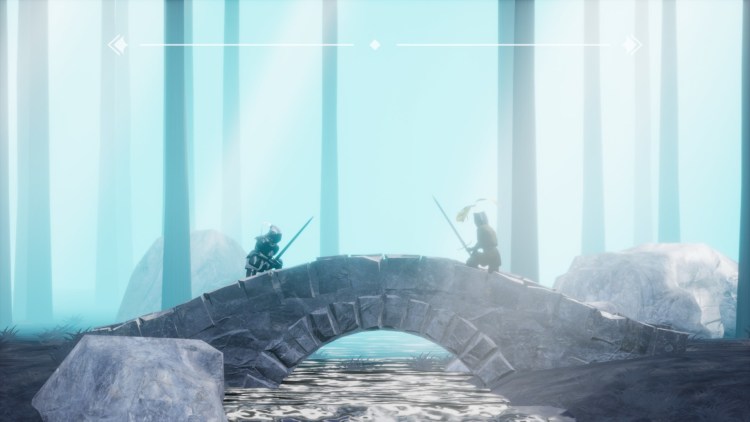 Even armored knights only take a few hits, making for tense standoffs.

The weapons are also modeled on real-life examples (although the historical use of a spiked flail is debatable, we can apply the rule of cool here). When parried, weapons clang, clash, and scrape off each other with satisfying animations that call to mind historical fencing illustrations or modern HEMA practice.

The art of the blade and bludgeon

Griefhelm’s combat revolves around a stance-based system. To attack or defend, you need to enter a low, high, or medium guard stance, which allows you to launch attacks from that angle, and defend against the same. The focus of combat is around watching your enemy’s guard and striking where they don’t expect. 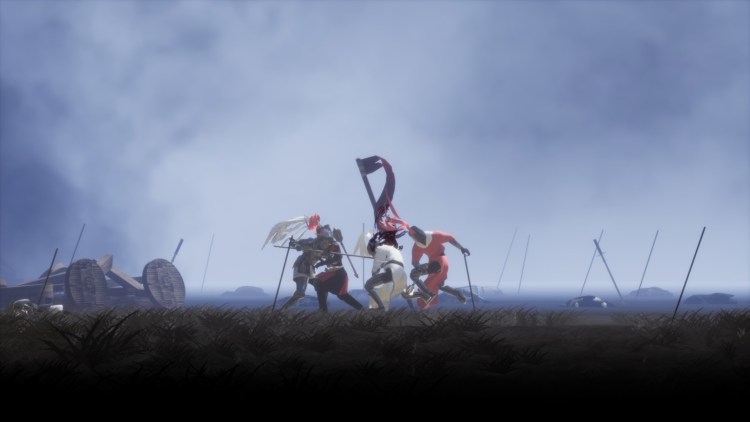 Someone order the shish kebab?

With this spread of weapons plus running and jumping attacks and a ‘shove’ move that lets you control distance somewhat, you can get a lot out of Griefhelm’s three stances. If you’re feeling cocky, there’s even a dedicated button to let out a battle cry.

‘Tis but a flesh wound

The shoves and parries feel great and realistic, but it’s a shame that this can’t be said about some of the hits that actually connect. Or that should connect, anyway. Weapon hitboxes, especially for non-swords, can feel a little off, leading to some situations where knights are whiffing through each other’s bodies uselessly. 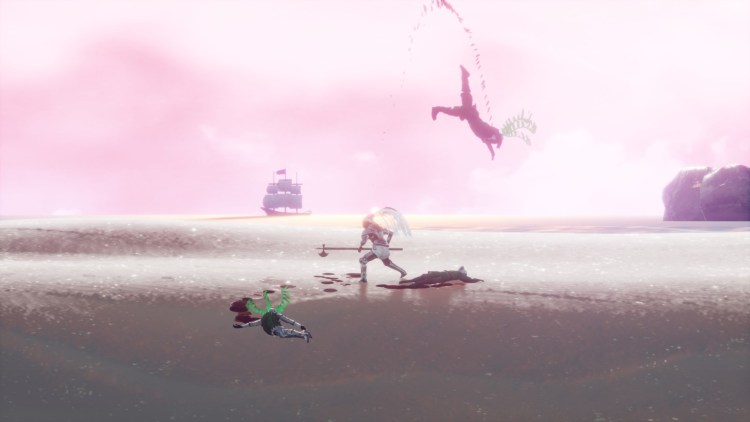 He must have had crazy high blood pressure…

Physics can also be quite screwy. Sometimes you’ll kneecap an opponent only to send them flying through the air like a blood-propelled rocket. Don’t get me wrong, that is quite fun, but its more Monty Python and the Holy Grail than the realistic style Griefhelm appears to be going for.

The different environments present a nice variety of attractive backdrops, from forests to castles, crypts, battlefields, and more. There’s even an ominous eclipse arena that looks like a shout-out to Dark Souls 3. The levels are attractive and serve as more than just decoration, with many containing environmental hazards you can plan a strategy around. Many have areas that obscure your view, which is a pain in single-player but offers some potential for setting up your own traps in competitive play.

More fun are the obstacles and traps that complicate the battle without deciding it, such as knocking down a chandelier to stumble a charging opponent, or forcing them to back into a burning ruin. These environmental features add a nice touch of cinematic drama to fights that would otherwise be two tin pots playing rock-paper-scissors.

The campaign can be frustrating, but the meat of Griefhelm’s gameplay is in the ‘encounter’ menu. Here, you can set up fights according to different conditions: the straightforward skirmish, wave attacks, and Nidhogg-style tug-of-war matches in which you must push your way through respawning opponents to reach the end of the level. Free-for-all and team battles are also possible.

The game is definitely most fun with a few friends for couch multiplayer, testing your mettle against each other, and trying out all the different weapons, scenarios, and arenas. Up to four players at a time can participate in Griefhelm — this also applies to the campaign. The campaign mode offers a format with some kind of progressive arc, but it’s not without problems.

Griefhelm is heavy on the armor, light on the story. But there is a campaign mode where you’ll find a narrative concept alluded to in the form of inter-fight narration. It’s a node network of random scenarios that provide certain consumable power-ups upon victory, or extra weapons and armor. 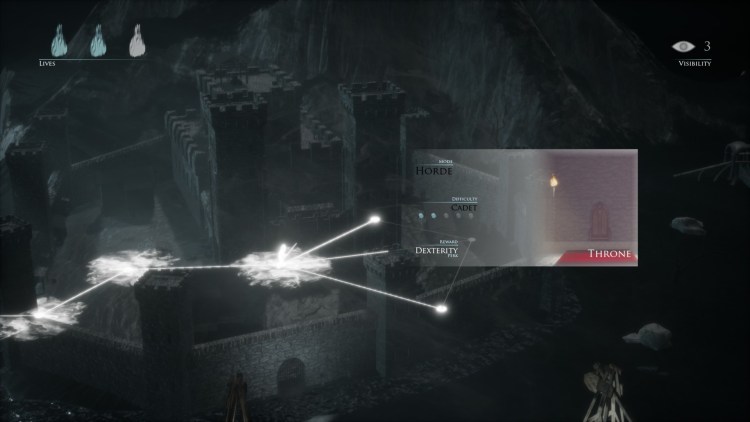 There are roguelike aspects to the set-up: you start with just your basic longsword, three lives, and no armor. Lose all your lives, and you have to start from the beginning. One particular victory perk can preserve equipment for future campaigns, to make it a little less painful. But it’s up to luck where and when such perks appear, or even if any of your desired equipment will.

Unfortunately, the campaign suffers a little too much from RNG, frequently throwing up bumpy difficulty spikes and redundant rewards (like weapons and armor you already permanently unlocked). The ‘mount’ perk, which puts you on horseback, is so poorly implemented as to be more of a handicap.

Despite all its good points, Griefhelm’s name can come back to bite it. This can be a very, very frustrating game. Even after getting good, the enjoyable combat is undercut by annoying elements that seem completely out of the player’s control.

While I enjoy being a knight of hard knocks in Dark Souls games, Griefhelm often comes across as downright unfair, especially in the campaign. Weapon hitboxes force you to memorize the ranges at which your weapons start passing through enemies, rather than just using your eyes.

The lingering impression of Griefhelm is that of a fun, shiny toy that loses its edge relatively quickly. The campaign doesn’t feel balanced for a satisfying single-player experience. The encounter mode is a lot of fun with friends, but wears thin after many battles with bots. Predictably, it wasn’t easy to find online opponents pre-release. However, Griefhelm stands to benefit from the kind of community feedback that would emerge from a competitive scene.

Despite its flaws, Griefhelm shows promise. Johnny Dale Lonack and his team are on to something here, and have expressed a desire to support the game post-launch with additional content. I’d be interested to see how this goes. Griefhelm is a good indie scrapper that acquits itself with honor. Whether it can truly achieve greatness, however, has yet to be proven on the field. 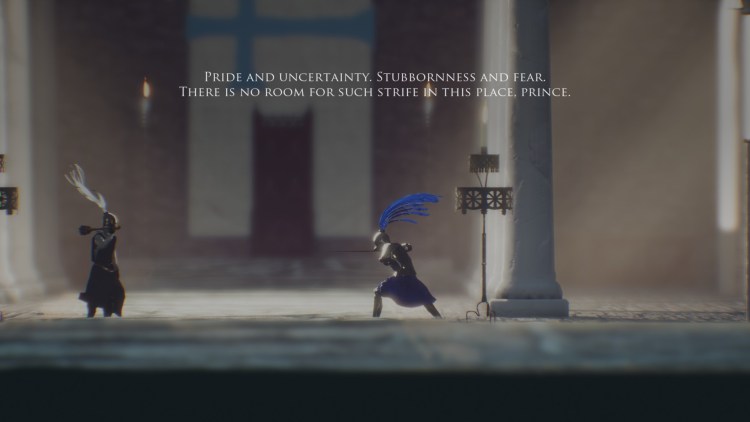 Griefhelm has a few story beats, but it’s more about swords than words.

Suit up in plate and mail, choose your weapon bash and slice your way to victory against rival knights in this attractive medieval brawler.
6

Griefhelm is a fun medieval skirmish game that fans of knights will enjoy, especially around the couch with friends. The potential of this lovingly crafted indie game is let down by some rough edges when it comes to close combat, as well as an unsatisfying single-player campaign.