“I’m not sure how players are supposed to figure that out,” says Double Fine’s Tim Schafer on the Grim Fandango Remastered commentary. He’s talking about a late-game puzzle involving demon vomit and liquid nitrogen, and he has a point.

Grim Fandango was originally released in 1998; an adventure game, like Monkey Island and Sam & Max Hit the Road, steeped in traditional LucasArts design. While the majority of the game’s puzzles are wonderfully constructed, a couple do assume that the player is willing and able to add a touch of surrealism to their lateral thinking. Or at least click on a bunch of interactive points until something happens.

Anecdotal counterpoint: 16 year old me did figure it out, just as I figured out all the rest. I persevered, because Grim Fandango is the finest adventure game of all time. 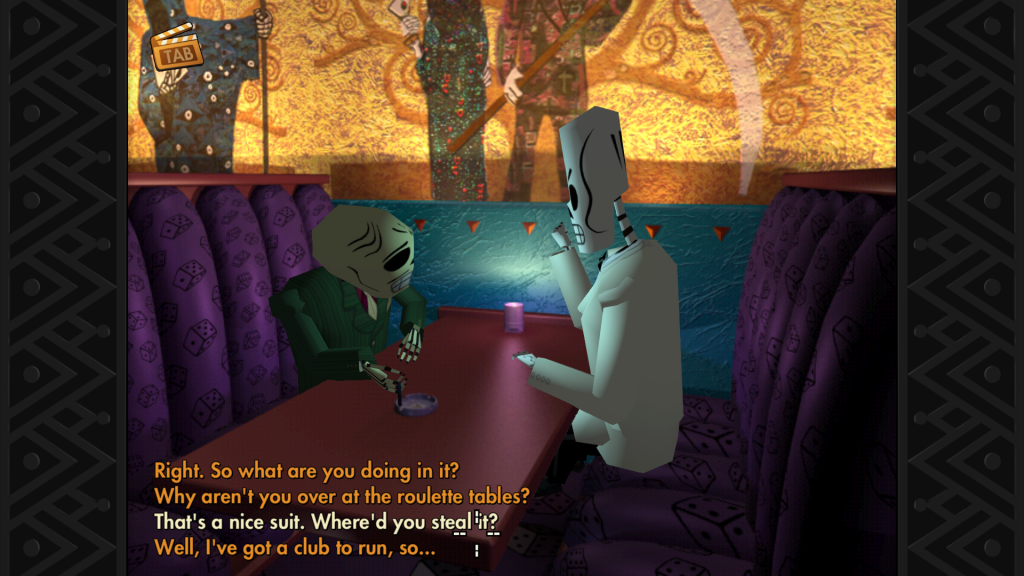 If you’re going to be the best, you may as well borrow liberally from Casablanca.

Several of the former LucasArts staff who contribute to the optional commentary soundbites that accompany almost every scene express regrets. They’re the regrets of perfectionists; animators lamenting that the systems used couldn’t prevent sleeves clipping through character’s hands, and coders who wanted to shoot for techniques and effects that the run-of-the-mill PCs of the age wouldn’t be able to handle. There are tales of late nights and even earlier mornings. Of fights to buy more time, and concessions over cut features.

The 120-some minutes (I didn’t count, but that’s what’s advertised) discussing the various guises of late-90s game design offer glimpses of how Grim Fandango came to be, and how fiercely proud its creators are of the finished version. Regrets and all.

This pride is reflected in how much of Remastered stays true to the original source. There are changes and improvements, which we’ll come to later, but it’s notable that this re-release gives no ground to contemporary adventure game conventions. No in-game hints, no object hot-spot highlighting toggle, and no changes to the (slightly clunky, let’s be honest) inventory system of shuffling through Manny’s jacket. The majority of additions are external, while the game remains resolutely faithful to the original source. 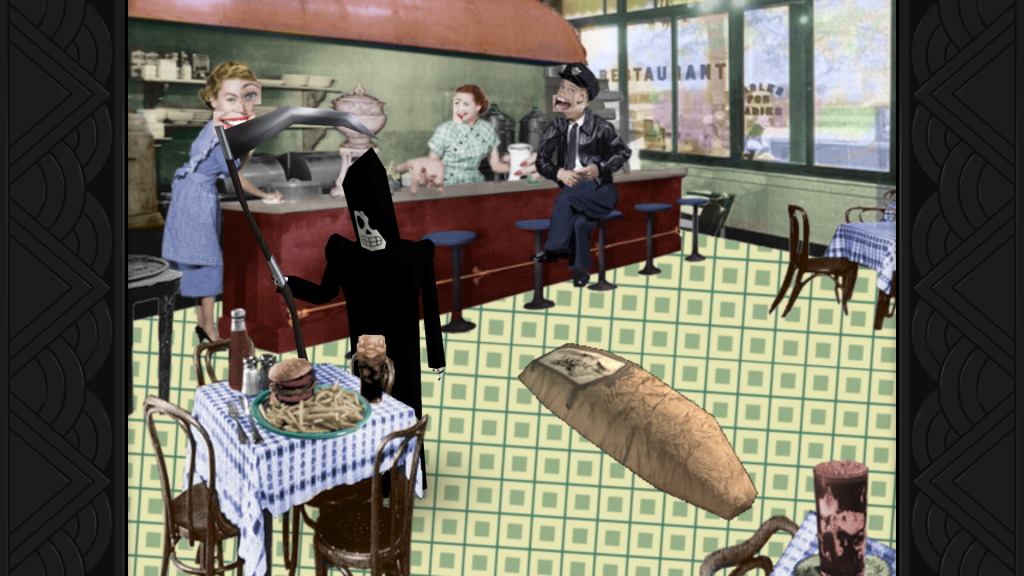 Sometimes the original source is a little … strange.

Manny, or Manuel Calavera, for those who don’t know, is the travel agent protagonist of this noir-flavoured tale. He sells travel packages to the skeletal dead, providing them with a mode of transport across the four year journey of the soul, commensurate to their behaviour in life. Morally upstanding types qualify for a trip on the “Number Nine” train. Others end up with walking sticks.

That’s the outstanding premise for an adventure game that pulls influences from Mexican Day of the Dead folklore, Raymond Chandler and 1930s Jazz. Then adds the sort of Schafer-era LucasArts surrealism which finds perpetually flaming beavers building towering dams of bone in a forest where apparently unmanned industrial equipment sucks the marrow out of trees for some nefarious purpose.

Grim Fandango is that rare example of a game where every department contributed their absolute best. The setting is unusual and magnificent in equal measure, with 2D backgrounds and 3D characters that do justice to Peter Chan’s incredible concept art (a great deal of which can now be viewed in-game through a special features menu.) Those characters deliver some of the best dialogue Tim Schafer has ever written, heightened by terrific voice acting performances. The first scene between Manny (Tony Plana) and Meche (Maria Carnals) has the same noir fizz as a back-and-forth straight out of Double Indemnity or The Big Sleep.

There’s not a dud voice among them, and whoever was directing (and editing) the recording sessions made sure that the timing and emphasis on the gag lines is exceptional. Likewise, Peter McConnell’s jazz be-bop (and Peruvian pan-pipe, among others) score sets just the right tone for Art Deco offices, smokey Beatnik clubs and towering Mayan temples. 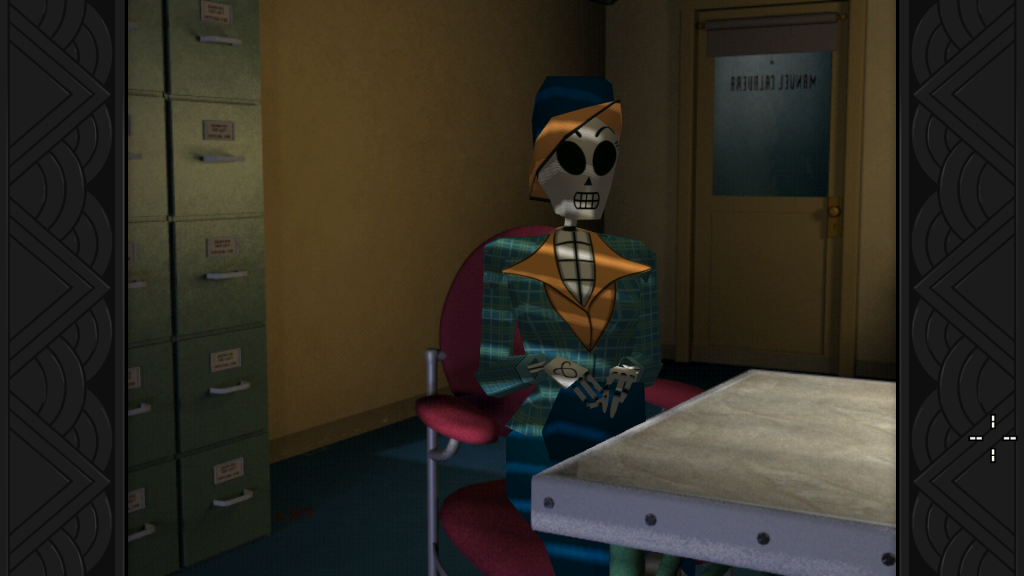 The only way this scene could be more noir is if Raymond Chandler is hiding in that filing cabinet.

Grim Fandango Remastered stays as true as possible to that original work, taking sensible steps to clear up audio fidelity (now that it doesn’t need to be compressed into a single CD) and splashing out a little to re-record tracks from certain key moments with the Melbourne Symphony. The changes made are largely about the preservation of a classic game, rather than any attempt to ‘remake’ segments.

It’s that old, perpetual film argument about how much an image should be ‘cleaned up’ before the artistry is disrupted. I think this edition of Grim Fandango finds a smart balance between preservation and remastering, though I’m sure there will be people more inclined towards the ‘remake’ side of things who were hoping for more.

Cut-scenes, for example, look pretty similar to the originals in terms of resolution and quality. They’ve presumably been upscaled in resolution, and, as mentioned, there’s a slightly different musical take during parts like the reveal of Manny’s club in Year Two. Otherwise, they’re largely unchanged.

The backgrounds too are either scaled up a little or based on the highest resolution source files Double Fine could obtain from the LucasArts/Disney vaults. This means they look best in 4:3 aspect ration, where they retain their fixed camera-angle composition. Here’s how the game handles 4:3 with and without added borders, plus the (stretched) 16:9 widescreen option available: 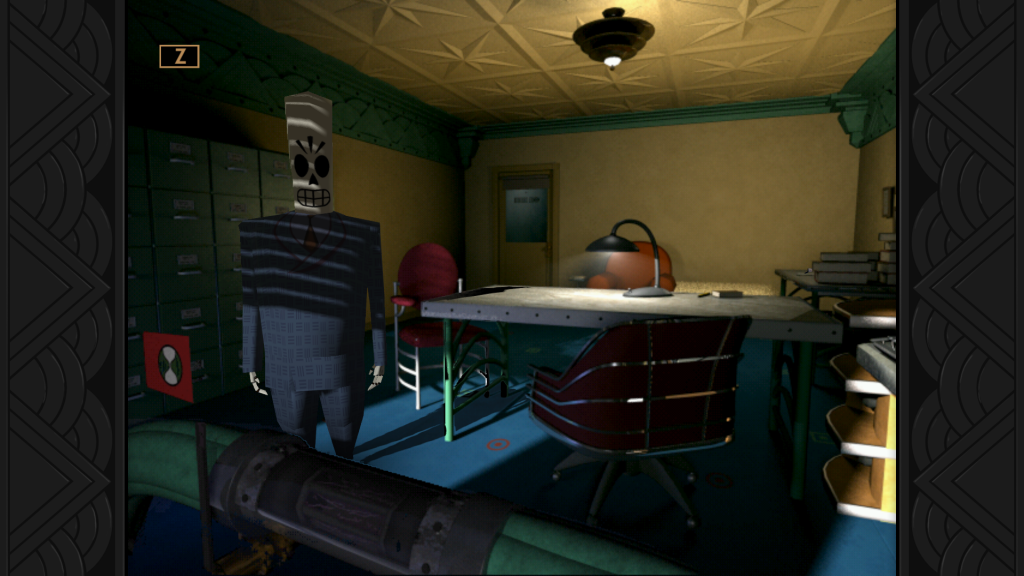 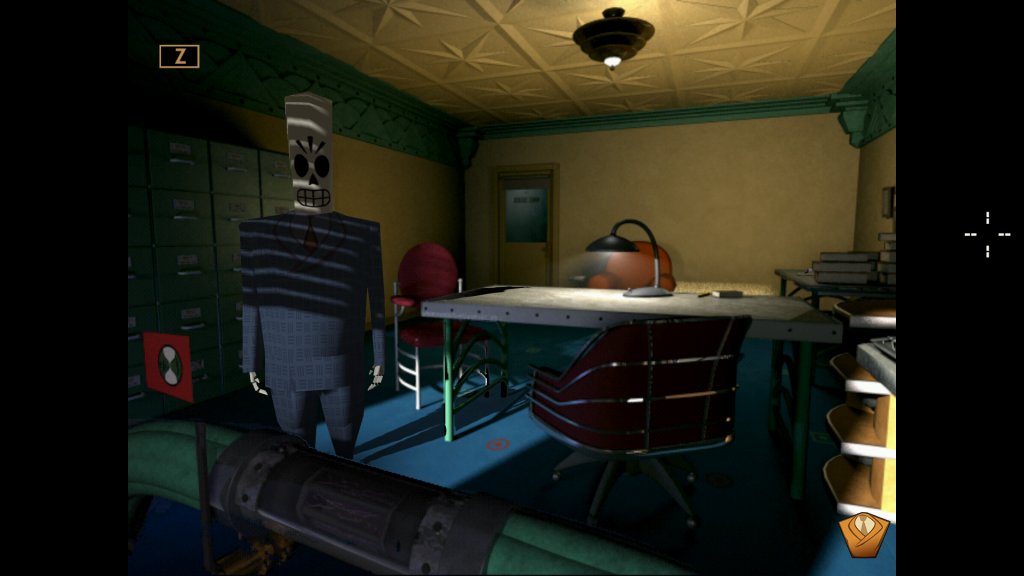 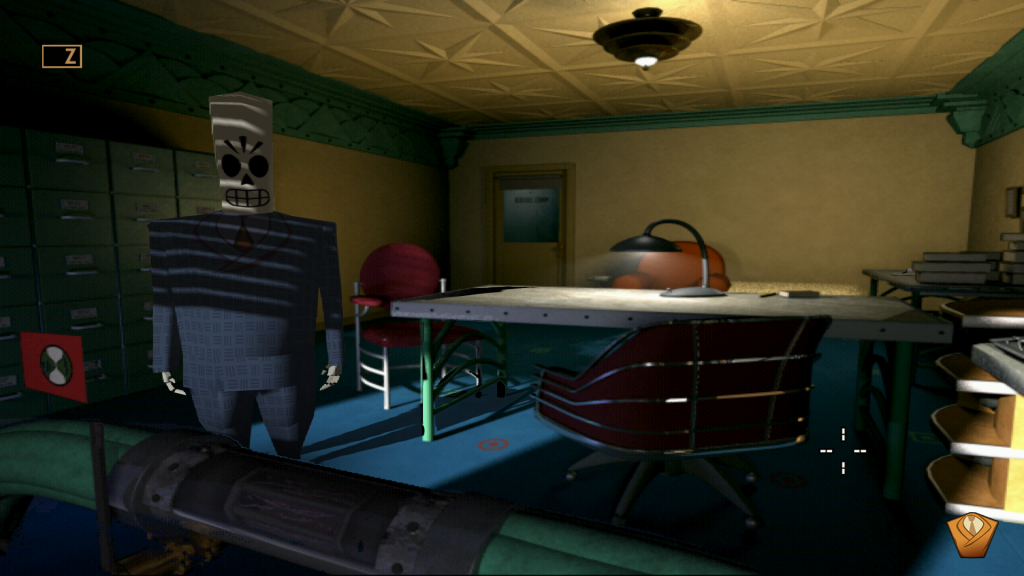 16:9 widescreen. Manny’s put on a couple of pounds.

Grim Fandango Remastered reuses the game’s character meshes (which means they remain rather angular,) but adds much higher resolution textures to faces and clothing. A new lighting system has also been added, providing scenes with further shadowing and illumination; all-important staging aspects of the noir genre. Here are a couple of shots comparing the new textures and lighting with the old. It’s possible to switch between the two on-the-fly while in the game, just as it was with the Monkey Island remasters. 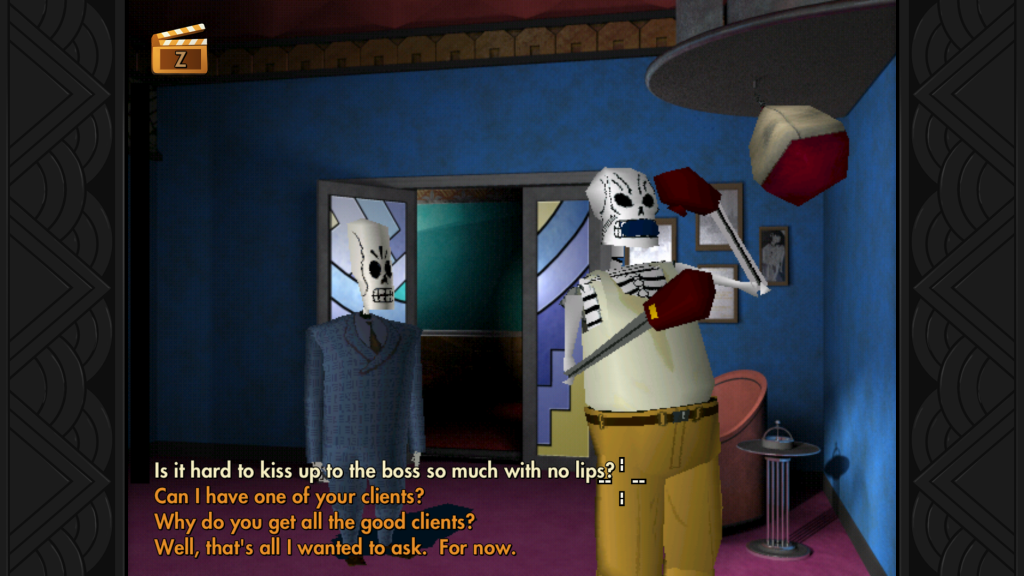 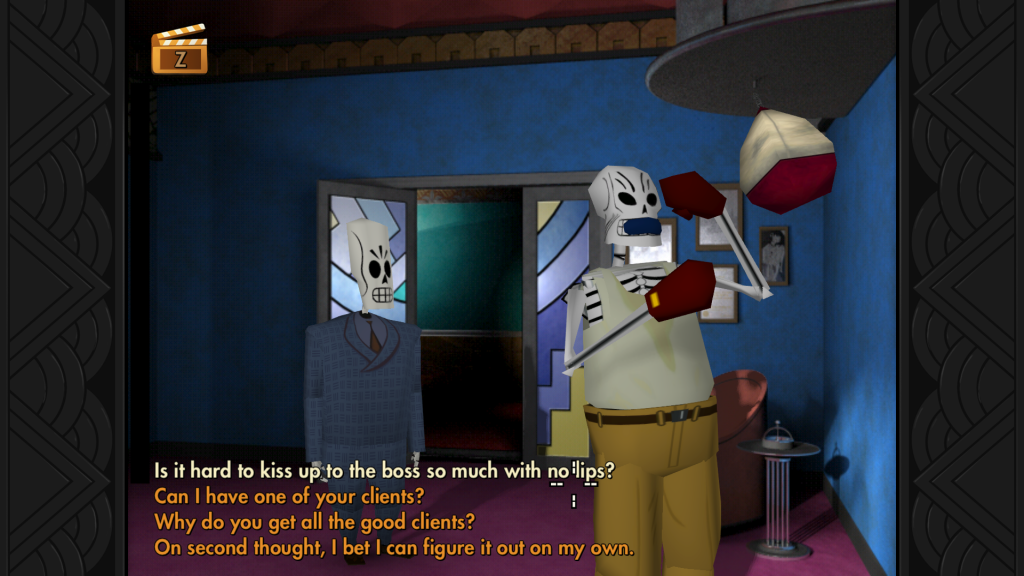 The original game dispensed with the point-and-click mouse interface (and SCUMM system) of previous LucasArts adventures and instead gave players direct control over Manny. Much has been made about adding alternative options to the old, character-relative ‘tank controls’ (think Resident Evil) in pre-release promotion for this game, but unless my memory is crumbling at an alarming rate I’m fairly sure the original had camera-relative control options too.

Point-and-click controls, however, really are a new thing. At least, officially speaking. Double Fine apparently contacted Tobias Pfaff and incorporated his mod work. These feel like a natural inclusion and (if you wish) allow you to manually find hot-spots of interest without having to entirely rely on Manny moving his head towards important objects. I played through with a combination of mouse controls and a bit of camera-relative movement for some of the more physical traversal points, like ladders.

As I’ve already implied, the commentary tracks are plentiful and for the most part clearly marked. A significant number of those who worked on Grim Fandango have taken part in the sessions, so you get an interest spread of views on casting, coding, rendering and designing the game.

Interestingly, I’m pretty sure one or two previously cut lines have been re-added to the game. Don Copal’s auto-reply computer system now has a couple of extra options on it, and I could’ve sworn that the Beatnik characters now have a little more repeated dialogue. After confirming that the Don lines were indeed new, I started listening out for more. They’re by no means plentiful, but I’m convinced there are a couple more (presumably cut or lost) lines dotted throughout. 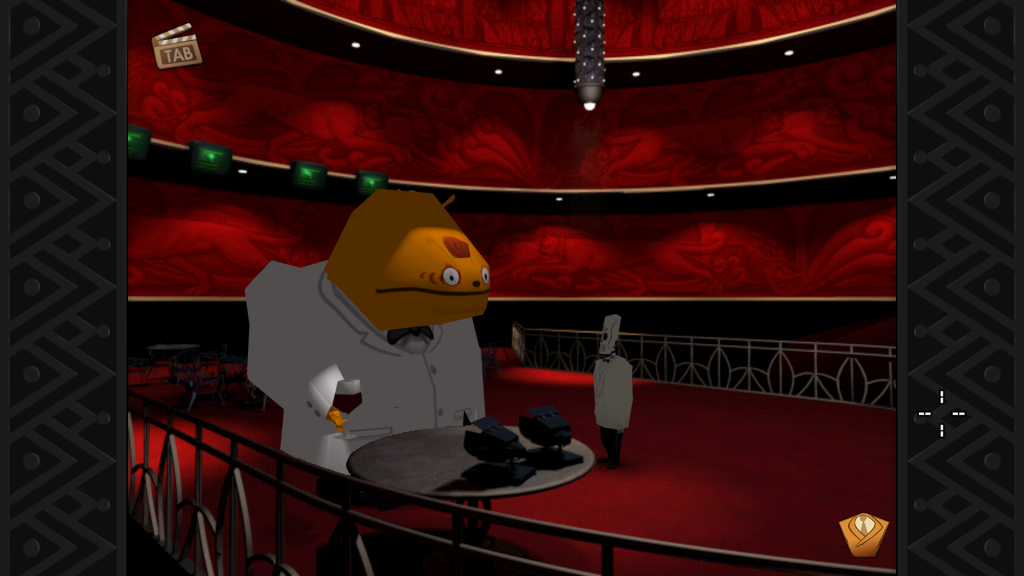 As someone who dearly loves Grim Fandango, I’m also in the perfect position to nit-pick at some parts of Remastered which don’t seem quite right.

Some minor animation bugs (which presumably remain due to the original code being reused) pop up, like Manny taking his scythe out twice in succession during the Land of the Living sequence. There are also occasional rough edges, like a newly textured head being stuck on top of an old, jaggy-lined body when boss Don locks Manny in the garage cupboard. Or places here and there where you can see the cut-out lines which denote where 3D Manny is allowed to walk ‘behind’ parts of the 2D backdrops. These latter issues, I’m fairly sure, are due to the upscaled resolution allowing the human eye to catch them more easily.

During my time with the press build I experienced a few crashes during cut-scenes, but as of the latest patch these appear to have been resolved. I mention this only because I’ve not been able to replay the game again to test every cut-scene, but the earlier ones no longer give me any trouble. 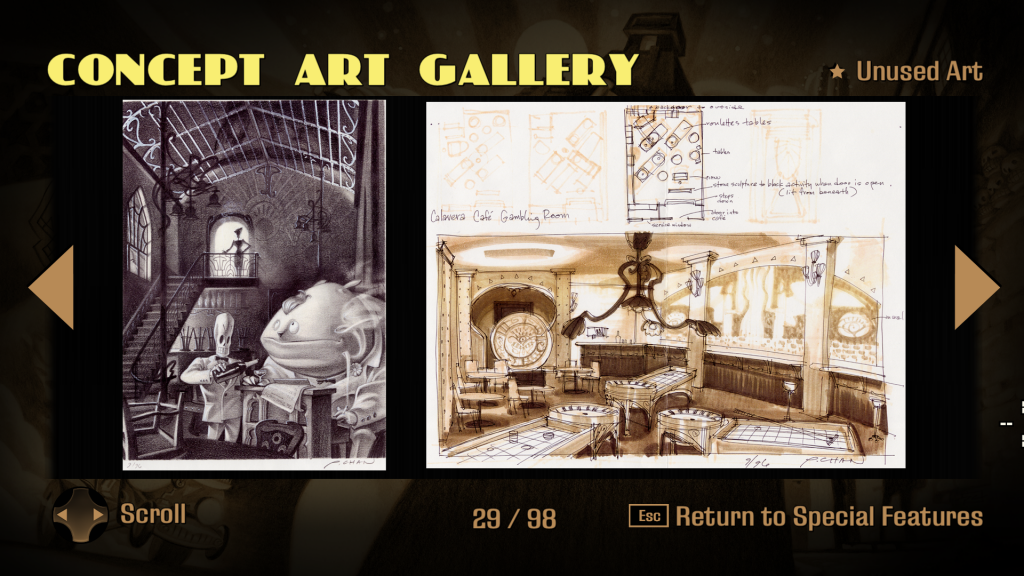 Every single piece of concept art is gorgeous, but I wish I could enlarge them.

Remastered seems to be missing a couple of things too. Manny appeared unable to play the piano (and sing his sad lament) in the Calavera Cafe, for some reason. Similarly, there was no prompt to let him join in with the SeaBee protest chanting. I’m assuming these are bugs, because in the latter case there’s an achievement for performing that very action.

Curiously, there are now no underwater effects applied to the character voices during the segment at the Pearl (as there were in the original); and while most of the object and character textures in Grim Fandango Remastered now look lovely, a few (like the bread you can grab early on) are still their old blurry selves. Again, these may be bugs in the press build, or oversights, or somehow related to problems with the original files. They may even be fixed with a later patch. But as of four hours ahead of release, they’re unchanged.

Since I’m dwelling on some minor complaints, I wish the concept art gallery could display Peter Chan’s fascinating sketches in a larger form. It’s possible to just about see most of the finer details, but being able to pop up each individual piece in (at least) 1920×1080 would’ve been even better. I’d also like to add a separate digital OST to my wishlist. It’s a shame to only be able to hear the newly recorded pieces of music in-game. 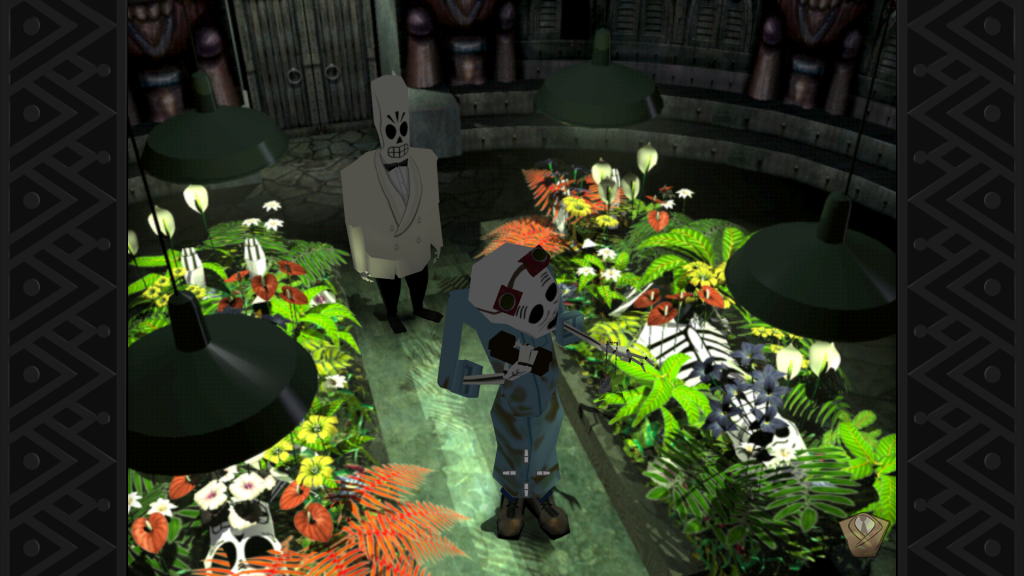 Forensic botany is a much under-appreciated field.

If you’ve never played Grim Fandango before, I envy you. I really do. This edition is the ideal chance to experience the game pretty much exactly as intended, with the addition of convenient mouse controls, aesthetically-appropriate lighting, and clearer character textures. The lack of any in-game hints means you may get stuck, but there are still plenty of walkthroughs out there from 1998 if you really can’t progress. Or ask me. I can no doubt help you out.

Grim devotees will hopefully appreciate the philosophy of historic preservation behind the project, and find plenty of interest in the developer commentary tracks and unused areas referenced in the concept art. Even if you own the original CD (as I do,) this is now the definitive edition of the game. A couple of bugs and slight missed opportunities mean Grim Fandango Remastered is imperfect in its considerable archival achievements, but the title itself remains one of the greatest of all time.