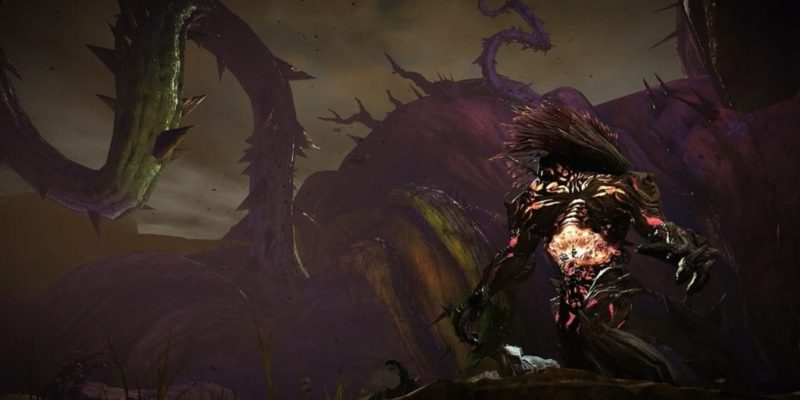 Called The Dragon’s Reach: Part 1, Tyria is being threatened by the Elder Dragon Mordremoth and Mordremoth’s minions are extending their reach further into Tyria. This episode also brings new rewards including a new back item “which will grow and change as your adventures continue in Episodes 3 and 4”.

Highlights in this update include:

The Call Goes Out
The races of Tyria will need to be convinced that Mordremoth’s might is the gravest threat facing them. Each race has its own concerns, from encroaching ghosts and dragon minions to mysterious magical anomalies. It’ll take determination and some daring acts to persuade the world’s leaders to put the greater good above their own troubles.

Corruption Spreads
Mordremoth’s corruptive power is spreading. The lethal vine attacks on Concordia and Fort Salma are not the extent of the dragon’s danger. Now the threat is making itself felt in the far reaches of Ascalon. The charr in the Iron Marches have witnessed an outbreak of Mordremoth’s corruptive power, and they’re in need of your aid! Reports are coming in of more and more entangled waypoints – will Taimi be able to set them to rights?
Story Journal
Log in today to unlock free, permanent access to the story of The Dragon’s Reach: Part 1! Once you’ve completed the episode, you’ll be able to replay it through the new Story Journal feature and push yourself to complete ultra-challenging achievements.

Reap Your Rewards
In addition to continued access to Dry Top rewards like Ambrite and Zephyrite Lockpicks, this episode brings more brand-new rewards! Begin construction of a new back item which will grow and change as your adventures continue in Episodes 3 and 4, and search through Buried Locked Chests for a chance at one of three new Kites! The Ventari Follower, Prosperity Mine, and Crystal Shard Kite toys will grant you increased movement speed while carrying them.

Firefly Online – Five reasons for the Browncoats to get excited