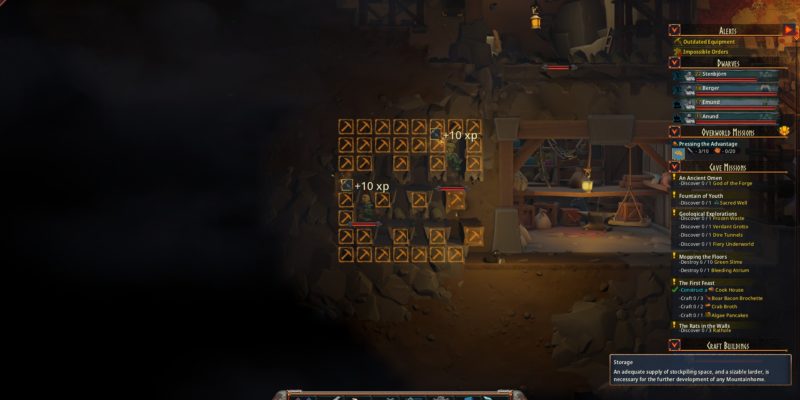 Zero-to-hero colony sims like RimWorld usually take place in space. But fantasy? Dwarves? That’s a hard ask outside of the Dwarf Fortress series. As it turns out though, every gamer wants to control not one, but multiple stunty underground weirdoes, so people keep trying to make games about them. And I’m not writing about Dwarfheim again. No, we’re talking about Hammerting.

A game like this usually throws you down on a space rock in the middle of nowhere to fend for yourself. Not Hammerting! It’s a world that you have a place in. Like in every good fantasy story, the good guys are at war with the baddies. In this case, it’s the League of Metis against the Dread Horde. The protagonist nations count among themselves humans, elves, and of course, dwarves. That’s where you come in, commanding a dwarf expedition (of three persons) sent to rebuild Mountainhome, their ancient abode. Your overarching goal is to contribute resources to the war effort. However, there’s literally nothing there, so the dwarves will have to build, excavate, and mine everything from the ground up. That’s your job.

In a sense, Hammerting is like a dwarfy RimWorld, albeit at a very early stage of development. The mountain is displayed like a side-scroller, and 3D dwarves populate the tunnels. Starting from a humble quarry, you’ll build a veritable fantasy military-industrial complex.

Aside from rooms built into the wall of the mountain, you’ll also have infrastructure in the foreground. You can place blocks that act like unmined ground for movement, and scaffolding to facilitate vertical traffic — the latter can even go over rooms. As the complex gets bigger and more complex (hur hur), you’ll need to move to elevators (which can’t be placed over — or rather — in front of the rooms) and train tracks. The elevator will be the first pain to build until you understand the trick: start from the bottom station and the dwarves will ride it up the line to build the next layer of track. It works the same way for the railroad! 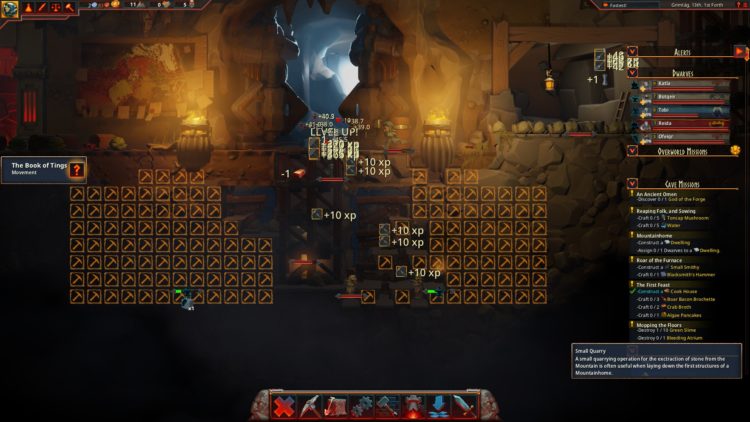 The quarry (top right) sits on an endless vein of granite.

Aside from some construction micro, your rule in Hammerting will be relatively hands-off. The dwarves automatically rush to fulfill the tasks given to them. Sure, they have their traits and stats which make them more or less suitable for work, but most of the time it doesn’t matter. During the early game, the dwarves don’t starve easily and don’t need to sleep – they only need rooms to stash their coin.

I work HR at Hammerting Lodge

Your dwarves are relatively simple creatures, content to grind it out at whatever task you throw at them. They have basic needs you will need to satisfy, but the job manager functionality is in very early stages of development. There’s even a notification from the developer that states this in the game, so you don’t need to worry about specializing too much.

So far there are just three things to keep track of. The first is Greed, and that applies to providing rooms for the dwarves to stash coin. There’s also Energy, which is refilled by food. Last is Morale, which regenerates via hanging out and drinking beer. All in all, they depict a dwarf’s life fairly well. 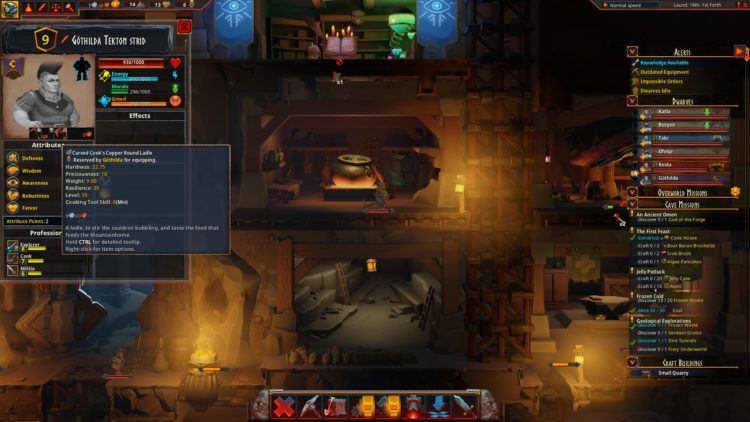 For the love of God, don’t give ladles curved handles, or they will be unsuitable for use in cooking.

So, what do you worry about in Hammerting? Well, the war, of course! From time to time, you’ll get a warning about “Omens of War” which, more often than not, means that the Dread Horde is attacking one of the friendly areas of the overworld map. For you, this means accepting a quest to bolster the defenses. Failing to provide the required resources will result in the location being lost. This can be comical because of how little you need to supply at times to make the difference between a victory and defeat. Also, keep in mind that if you lose all of the locations on the overworld map, you lose the game.

At the same time, you can get quests from the overworld to deliver certain resources for trading. It can be as simple as a few copper ingots for a few eggs. It can also be much harder, requiring both industrial work and traded base resources. These quests aren’t timed, and they often reappear. It offers you a way of exchanging goods that you have for the ones that you can’t extract from the mountain (and also money to feed Greed and hire new dwarves). All in all, the overworld aspect is very good at providing motivation other than “build bigger.”

On the other hand, the game’s research system will be an even bigger motivator to explore and expand than anything else. Technically, you’re not strapped for basic resources, as the Quarry has an endless supply of stone and you can find copper everywhere. However, to unlock new technologies, you need Mountain and Trader Lores. The latter is obtained by finishing missions. The former is accrued mostly by exploring the mountain. Once you have the necessary amount, you can instantly unlock the research subject you need. 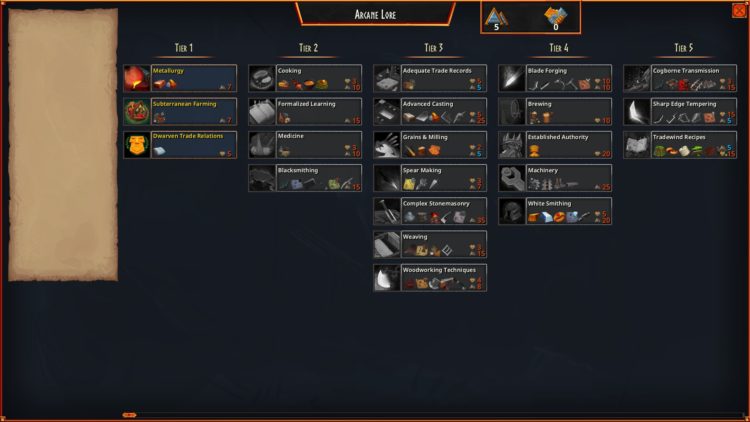 Trade relations teach you the secrets of “having a private room.”

Teching-up in Hammerting usually means adding new rooms, and maybe even crafting new equipment for your dwarves (they can carry three each and some work can’t be done without the necessary tool). Your smelter and blacksmith will see quite a few capability unlocks before you need to build a bigger, better workshop.

Unfortunately, that’s where Hammerting may run into to some issues. To build a Great Hall, you need among other things, mortar. One of the ingredients for mortar is lime. And lime requires bone ash to make. To create bone ash, you need bones. Now where do you get that? The game doesn’t tell you. Rats and goblins don’t drop it after being killed, so your only recourse is to hope that you’ll find some resource like reanimated skeletons in the wild while exploring.

Oh, this is probably a good moment to talk about combat in Hammerting. It’s not great! Most of the time, you’ll find random critters by uncovering new areas of the cave. More often than not, solitary enemies are no threat to a dwarf that only has a pickaxe for defense (and when you think about it, pickaxes are scary). So, those poor enemies will be taken care with ease. 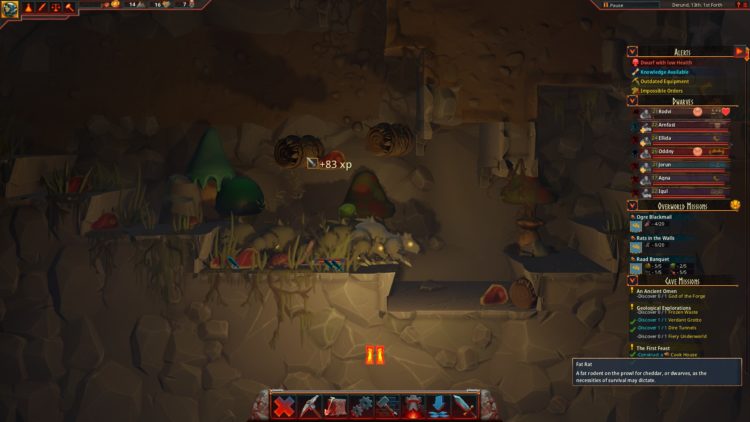 The small green dot at the center is a dwarf turning this rat swarm into rat haunches and rat hides.

You may also come upon creature spawners, which are set into the background — just like rooms. Dwarves will gladly try to destroy them. However, the spawners in Hammerting unleash their cargo in waves, so a single dwarf will be quickly overwhelmed (I’m not sure if they stop targeting the spawner when a sudden wave of rats starts gnawing at their shins).

This usually leads to a single dwarf at low health sprinting back to base, leading a conga line of enemies. Said enemies are laser focused on the first dwarf and will miss the second one that’s charging in the opposite direction. That second dwarf usually ends up slaughtering the whole swarm solo. The developer might want to think about that.

Recording it in the sagas

Where Hammerting stands out for me is the quality of the writing. Yes, the descriptions of dwarven clans, culture, and even character skills are flavorful. They’re written in a tone that could be even called dwarfy. It’s serious without being pompous and overbearing, and it bears a healthy bit of humor without falling into tongue-has-pierced-the-cheek levels of whacky nonsense. Heck, overworld locations have two descriptions each: a long-ish paragraph describing their natural state, and a single line describing them after they fall in battle. The game doesn’t seem interested in going into the day to day matters of the Rhasun Penal Colony, previously a League of Metis caravan watering hole and trade intersection of Serai at Rhasun… 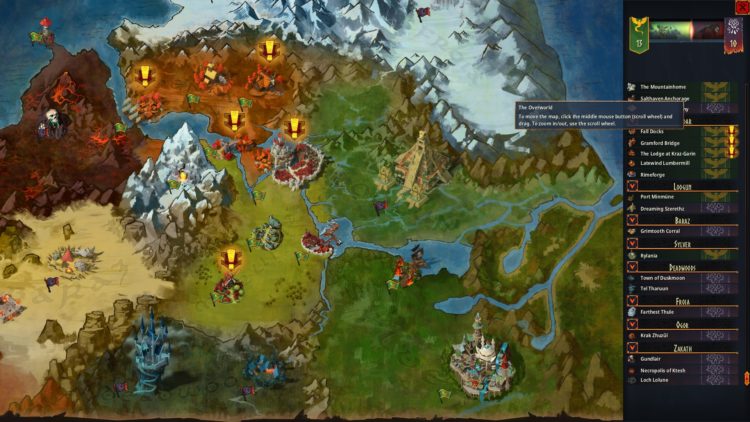 Try not to lose too much of this.

But while the writing in Hammerting is good, I can hardly say the same about the 3D visuals. Overall, there is really very little gained in the game going 3D. The coolest effect is dwarves and critters going into the rooms, to the point where dwarves can enter the room on one side and exit on the another to avoid a gap in the floor. But aside from that, it does nothing. When you focus on them, the dwarves are chunky potato men, bearing little resemblance to their portraits. The enemies look like random critters from a mobile game with an SEO-exploiting title no human can remember. All of this could have been 2D without any loss.

The audio, on the other hand, is adequate. The music is generally decent, and none of the sounds of dwarfy industry get grating. This is important, because your colonists can be working non-stop. The population itself is essentially mute, however, saving creators money and sparing us from potential voice acting issues. I’m a big fan of quality unit barks, but I already saw how that can go south when I previewed Dwarfheim.

All things considered, Hammerting has some potential at this point. The main menu screen boasts quite a few features that are currently in development, but it’s hard to say how they’ll impact the game. Currently, the biggest issue is that restarting a Mountainhome run (the other option is the weekly challenge) is a bit boring, because the start is always the same and only the plan of the mountain changes. But hey, come full (and not just Early Access) release, we might have a fairly decent dwarf game that actually brings something new to the genre.