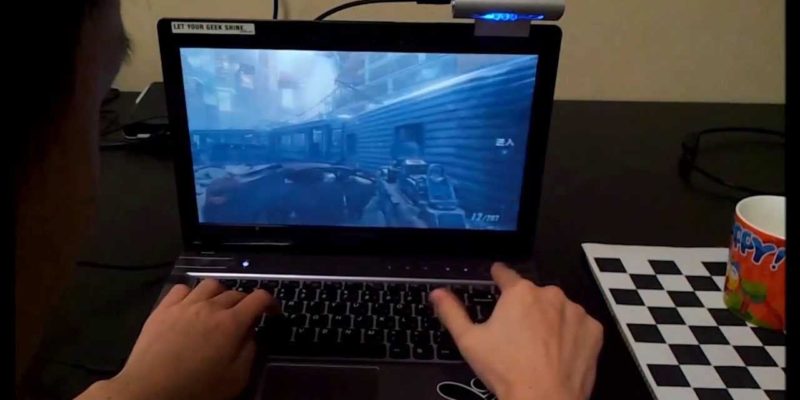 Okay, I confess that this Kickstarter is sufficiently old that there are only three days left, but it’s interesting enough that I felt it worth a quick news item. Sue me.

Haptix is a little device that essentially turns any surface into a multitouch panel. Clip it onto something (or lie it flat) and use a wall or desk or whatever as a multitouch panel capable of swiping, pinching, tapping; whatever.

Which, for the asking price of $70, isn’t too bad in and of itself – but I’m mostly interested in the ways it’ll let you play FPS games without a mouse, moving your fingers along the surface of anything to aim, pinching to zoom, and tapping to shoot. I’d assume it’d work equally well in certain non-FPS games, although I wouldn’t necessarily like to try and RTS with this.

If it actually works as well as is indicated, it’d likely be rather useful for someone with either a desk as tiny as mine, or with a laptop that they like to use in places where mice are a bit tricky to properly employ – like, say, a train.

The Kickstarter has already passed its $100,000 goal, and has even hit its $150,000 stretch goal to add pressure sensitivity. As the Kickstarter’s still running, though, you can still pledge towards it to get a few extra bits and bobs; you can get the device for $5 cheaper, or get a program that turns your webcam into a hands-free remote, or… well, you get the idea. Lots of stuff.

Have a look at a video of someone playing a Call of Duty title using the Haptix below, or take a look at the Kickstarter here.

StarCraft Universe gets funded on Kickstarter