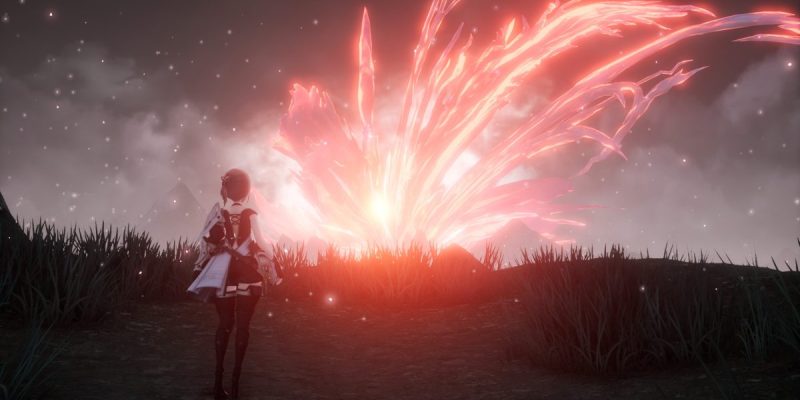 When Harvestella was announced, I was elated. I love farming sims, especially the Rune Factory series. So Square Enix making a AAA entry into the genre is something I’ve wanted for years. Don’t get me wrong — this is a good game. But it’s not the AAA product I had been expecting, despite that $60 USD price tag. So many aspects of the visuals are dated and the combat is quite lackluster. But a hefty amount of content with lots of farming and questing coupled with a fairly decent story all make it well worth a play for lovers of farming sims who don’t mind an emphasis on JRPG elements.

At the start, you’re offered a choice between two character models. One is a dainty female character. The other is a taller, more muscular female character. You can change their skin tones, eye color, and hair color during the “character creation” section, but that’s it. Harvestella begins with your character getting discovered by the doctor of a small village known as Lethe. At the end of every season, a day known as Quietus emerges which withers crops and causes the outside to be hazardous to living beings. For some reason, the protagonist is unaffected.

Shortly afterward, you find a young woman wearing a suit of armor unconscious in a strange facility. Her name is Aria and she’s from the future and wants to get back to her time. There are a surprising number of sci-fi elements at play here, including the game’s villain, who’s part of a sci-fi and fantasy hybrid race known as Omens. The villain is Geist, and he’s trying to pull off JRPG Villain plan #47J — remaking a better world according to his whims. His plans are tied into mysterious objects that control the seasons called Seaslights. You get all that? 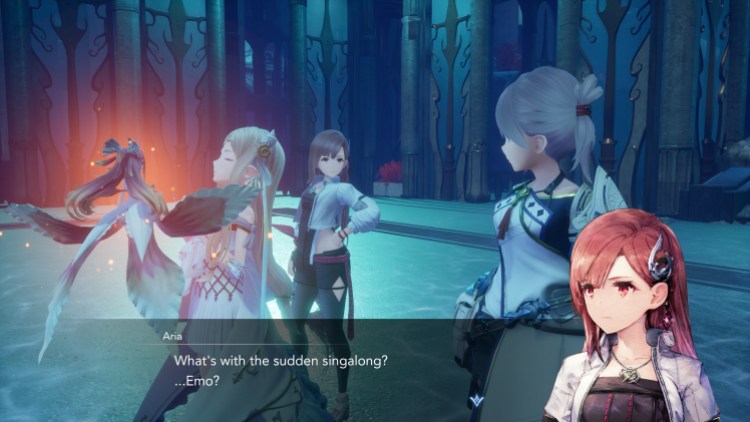 Don’t I know you, Mister?

There’s a heavy plot focus in Harvestella, if you somehow couldn’t tell. There’s a ton of dialogue and a lot of characters. Plus, you’ll constantly find new sidequests that are well worth doing. These have their own detailed plotlines that often come back for follow-ups after you’ve completed an initial quest. All of the writing is fairly good. But the game is almost completely unvoiced, save for voice lines in combat and certain characters milling about your farm. Rune Factory 5 had way more voice acting than this.

The game honestly has gorgeous art direction. Some areas, such as a town by the sea called Shatolla, are stunning from an artistic perspective — the use of color is excellent. But the character models look like something out of an early 2000s game. They animate that way too, with canned, robotic movements. There are also very few NPC character models and you’ll constantly see the same ones recycled during side quests. They have different hair colors and skin tones, but you’ll be doing quests early on and go, “wait, isn’t that the guy from the other quest?” And then you’ll see him again and again for the rest of the game.

Truthfully, I was very disappointed by this. I was also quite disappointed in Harvestella‘s combat; it’s a poor action game. Certain jobs (like in Final Fantasy) have a dodge ability, but it grants you no invincibility frames and you can’t cancel attack animations with it. Dodging is only useful for getting out of the way of certain boss attacks, as those are frequently accompanied by red overlays telling you where the attack will hit alongside enough time to escape the strike. 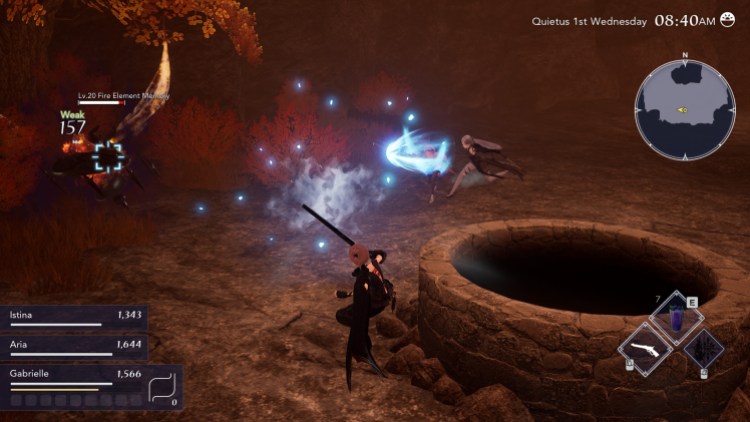 I’d describe combat as something similar to a Diablo-esque ARPG. If you’re using melee attacks, you’re going to be regularly taking damage and will have to compensate with healing items. But the good news is that you can bring along two AI companions. They’re braindead, though. If you don’t attack an enemy, they will literally just stand there while foes attack them. They’ll allow themselves to get beaten to death with zero interest in self-preservation. The best way I’ve found to enjoy the combat is to use a ranged job and bring two melee comrades. I’d aggro an enemy and then let my partners tank the damage while I blasted away from a safe location.

Every time a new party member joins up, you get access to a job that basically lets you change your outfit and use their weapon. My favorites are the mage and the avenger, the latter of which just gives you a gun that shoots ice and fire bullets. As you kill enemies using a particular job, you get SP points that you can use to buy new abilities and upgrades for each job. The system works well enough, but combat is just as weak as the character models.

Of course, there’s farming too. It’s standard but it gets the job done. In the initial part of the game, you’ll be joined by fairies that give you tasks. Completing these tasks will grant you certain upgrades to your farm and farming abilities, such as being able to charge your tools. The experience here is just what you’d expect: buy seeds, till soil, plant, and water. You can also build processors for crops and other ingredients. Making a distiller for juices is the best way to make healing items. Strangely, processors are placed directly on the field and take up a space also used for seeds. That makes no sense to me. 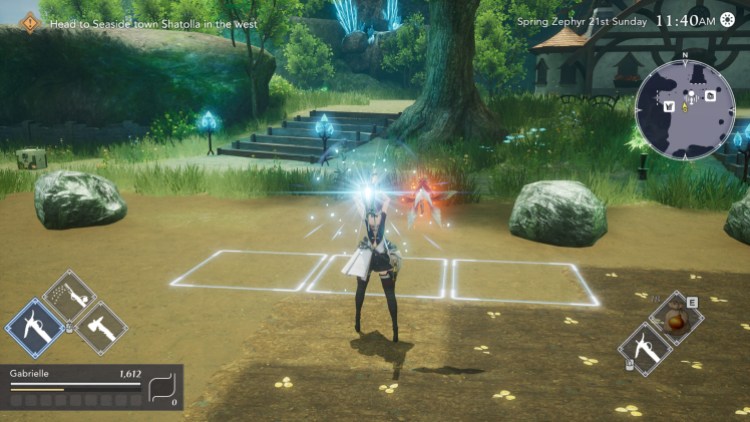 You’ll also upgrade your farm to let you plant more crops, plus you can raise animals that drop better ingredients the higher your affinity is. There are the typical four seasons, with crops that grow best in certain ones. I enjoy the farming in Harvestella, but it’s no different than any other similar game.

Instead of having a big world, you’ll move from town to town by traveling a world map, preferably while riding a mount that you can also upgrade. There are a lot of moving parts to keep in mind and there’s always a myriad number of activities to keep you busy.

Despite not being crazy about the combat and wooden character models, I honestly find Harvestella to be strongly compelling. If you like Rune Factory and want another farming sim/action RPG, Harvestella fits the bill nicely. But you need to know that it’s listed at a AAA price despite not matching AAA expectations. But I’ve had a good time keeping my farm going, making money, experiencing the game’s stories, and exploring towns and dungeons. I wish certain things were better, but overall the game is mostly what I want out of a genre mishmash. 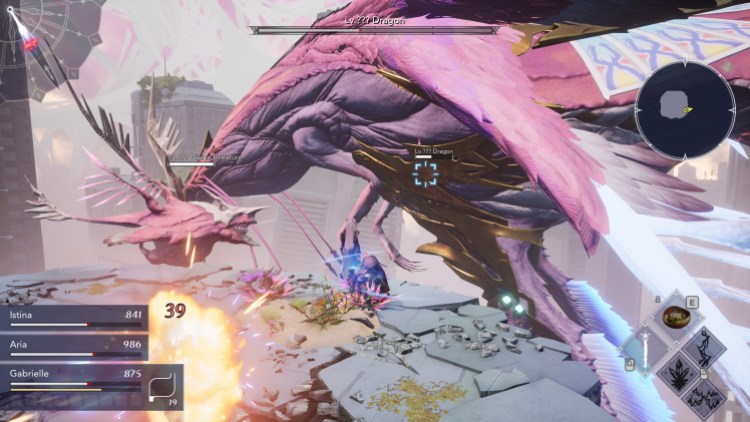 Harvestella may have unsightly character models and rote combat, but it offers a satisfying blend of farming sim and action RPG that scratches the itches it's supposed to.