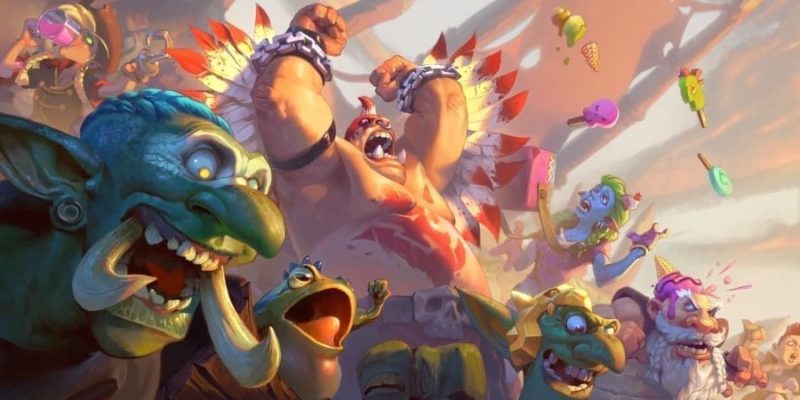 After a few microphone follies, creative director Ben Thompson took the stage once again for Hearthstone announcements at BlizzCon 2018. Thompson announced the third and final set within the Year of the Raven. He then went on to reveal Rastakhan’s Rumble, an arena found at the center of Stranglethorn Vale.

Each spirit comes with a different “class specific” ability. Spirits are “spiritual manifestations of the Loa they represent.” These animals were worshipped in the troll culture and known as Loa. For example, for a Paladin, you will be fighting for Shirvallah, the Tiger. The card is also identified as rare, only allowing two available to use per deck.

There were other newly announced cards, such as Sharkfin Fan, a neutral minion. Pairing this with other cards will allow you some dominating board control. For example, the Overkill Sul’thraze card delivers the ability to attack three more times in a single turn.

Rastakhan’s Rumble will release on December 4 later this year. If you are already excited about the newly added deck, you can pre-purchase it as of today. Head to the official Hearthstone website for more details, including the option to purchase it at this time.

If you’re on the show floor at BlizzCon 2018, you can play some of the mechanics that will be introduced with Rastakhan’s Rumble. More information will be revealed during the show during the Hearthstone panels.

Giveaway: Take One Of Our 2,500 Steam Keys For The Swords And Soldiers 2 Multiplayer Beta