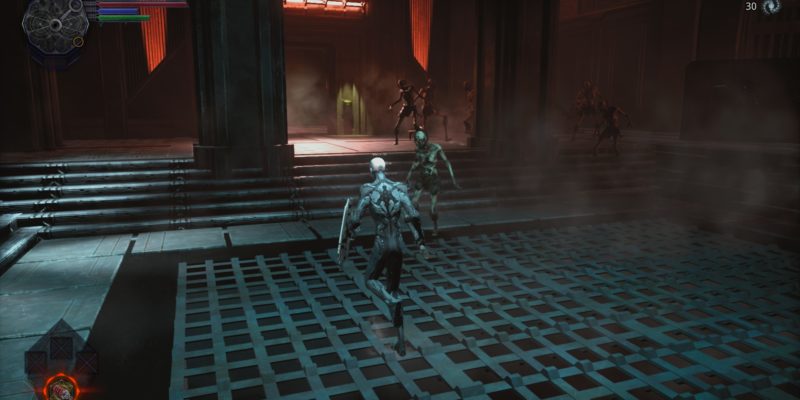 It’s been in the pipeline a while, but Cradle Games is nearly ready to drop their Kickstarted Souls-like, Hellpoint. I was able to get a sneak peek at the game early, and while it’s very reverential, I think fans of the subgenre will feel very much at home in many ways.

Hell is home to me

Hellpoint begins with your character, who appears to be an android with a mechanical body and human face, waking up on the space station Irid Novo. All you have guiding you forward at first is a voice beckoning you, so you naturally set off to see what it wants and what the hell anything is.

Whereas games like The Surge have also tried to put a sci-fi spin on the formula and even added some new mechanics that changed the way you interacted with everything around you, Hellpoint is content to give you something that is much more familiar. And honestly, I’ll take sticking close to the greats over clunky attempts to “improve” upon their systems any day. 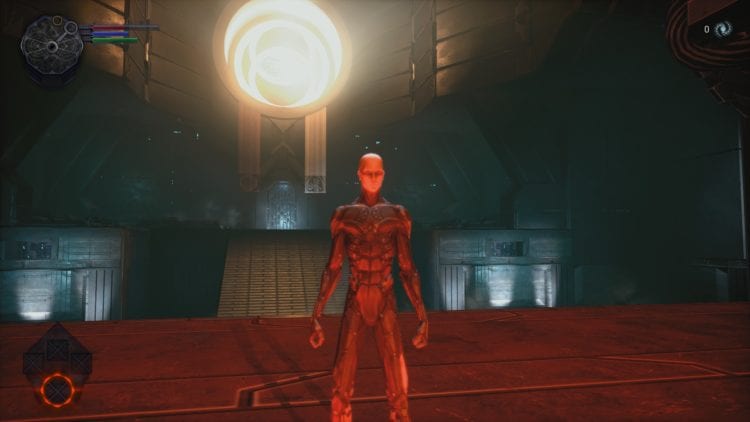 I’m not quite sure exactly what the character here is supposed to be. He’s referred to as a human, but who the hell knows? Well, the devs know. That was a rhetorical question if that wasn’t already clear.

The similarities between Hellpoint and Dark Souls are immediate and extremely apparent. From the meters on the HUD, to the movement, the combat, the exploration, and basically everything else, the game is very familiar. However, replicating much of this with such a small team and budget is quite impressive. While there’s a noticeable delay when attacking, the dodge works pretty perfectly, giving the user a large helping of I-frames.

Stamina is, naturally, of the utmost importance, as a few dodges or strikes are enough to completely drain your bar. But you can put points into your health, stamina, and various other attributes exactly like you’d expect. Weapons you find often have stat requirements for one or two of these attributes, so building your character around certain types of gear is very much in play.

Aside from the standard weapon types, there are also shields and laser guns. You operate these with the blue meter, so you thankfully don’t have to track down ammo to use them. They function exactly as one would expect, though. And of course, there are the bonfire equivalents that are surprisingly few and far between, and you drop all of your experience upon death. Very few surprises here. 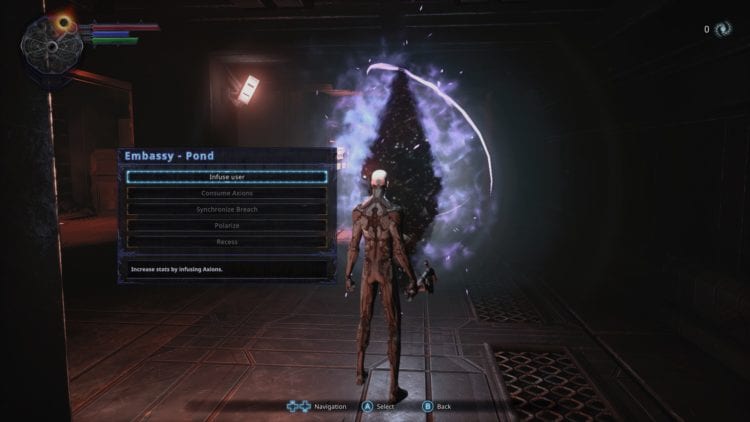 These are the game’s bonfires. Don’t expect to see too many of these, as they’re very uncommon. Almost too uncommon, really.

The biggest difference in Hellpoint is that you have a few more combat moves at your disposal. For instance, you can jump, attack while jumping, and use different versions of attacks based on your movement. You’ve got dodge attacks, sprinting attacks, and even a sprinting jump attack. Strangely, though, there doesn’t appear to be a parry. You do have access to both quick and heavy attacks though.

Much like The Surge, there are also different types of healing items to equip. You’ve got your instantaneous heal or your slower heal, for example. Your weapons can be improved with attachments as well, as there’s a trio of machines that you can find that’ll boost your abilities even further. One of these is simply a workbench to add these attachments, but there’s also one that lets you improve your healing capabilities and one that you can use to disassemble certain items into scrap that can create new gear.

Then there are the different mods that can be found. Your character can have three cubes equipped at once, and these all have different effects. One acts like a kind of floating flashlight that comes in super handy, as the derelict space station is, understandably, pretty damn dark. But there are also head and body implants that add various effects, such as one that makes the aura of light around your character larger, which reduces how much you need to lean on the flashlight cube. 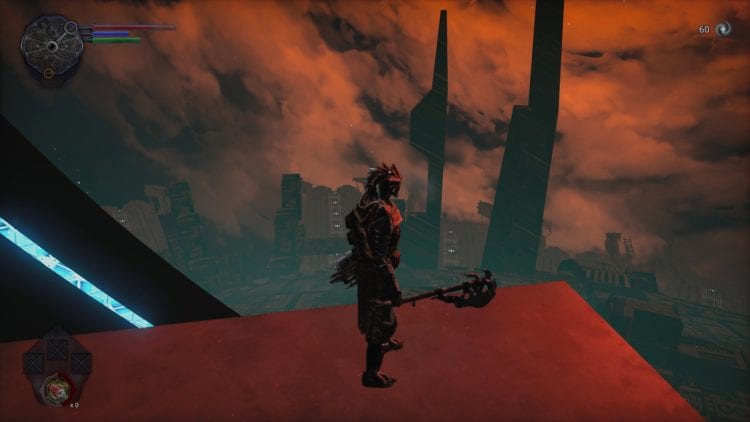 One way Hellpoint can’t compete with its inspiration is in the world design. As it’s set on a dimly lit space station, you’re going to be seeing a lot of metal much of the time. Dark, futuristic corridors that are all pretty samey-looking, even if the game does some things to mix this up. It doesn’t look bad exactly, but it’s just not very interesting.

The areas are all separate from each other and broken up by loading screens. If you were hoping for one large, interconnected area, you’re going to be disappointed, but you can still travel between certain bonfire equivalents via the menu. Speaking of which, the bonfires don’t resurrect enemies when you touch them. Instead, dispatched enemies will all resurrect on a timer.

You can still farm for experience, thankfully, as enemies all respawn when you die. You just need to kill everything near the bonfire and then lure the last enemy near it and wait while it slowly eviscerates you. Fun! One big difference at these is that you can make the enemies easier or harder depending on your skill level. Doing so will alter the amount of experience they drop while giving the player some control over the game’s difficulty, which less-skilled gamers will likely appreciate. 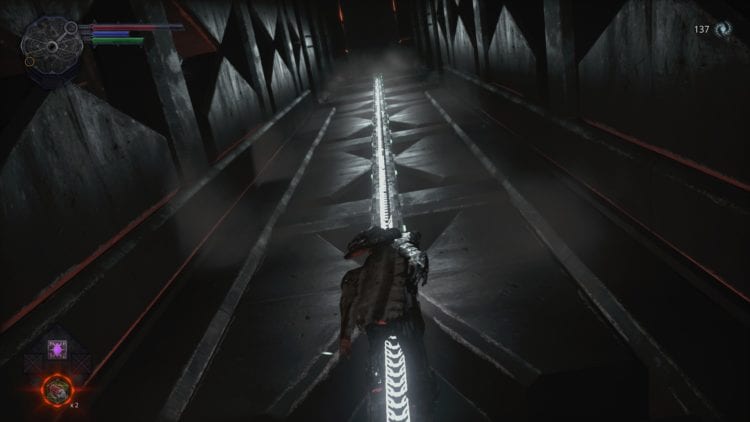 These, er, traversal poles can be found all over and will be the most common way to reach higher or lower ground. No, you cannot fight fires.

Don’t boss me around

And of course, there are bosses. You knew there would be! I’ve only seen a few of them, but Hellpoint also nails the general boss feel. The second boss did give me a problem, though, as the lock-on constantly broke due to how narrow the surrounding area was. That and it was really easy to get stuck in a corner. This boss itself was fine, but the area it was placed in was questionable.

If you die a ton of times while trying desperately to lock on to a boss, the game will automatically lower the difficulty on its own. While purists might scoff at this, they can always change this back at the bonfire equivalents. 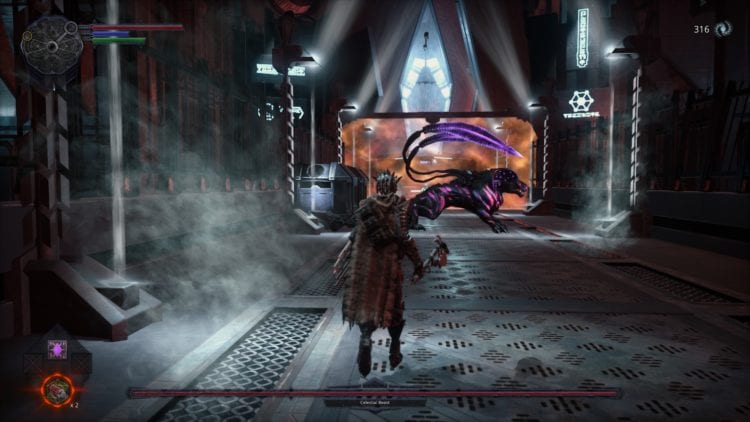 I wonder if that thing’s gonna hit me in the face with its tail. Nah, I’m sure it’ll be fine. (Spoilers: It most certainly wasn’t fine.)

Keep your eye on this one

If you’re a big fan of Souls-likes, then Hellpoint is very much worth your consideration. Since Dark Souls is done, it’s probably the closest another developer is likely to get. Sure, it’s not on the same level or anything and the overall world design can’t quite compare, but the fact that anyone could get this close in the first place is quite the feat.

We’ve still got a couple of months until the game gets released, but it’s a promising sci-fi Souls romp that I’m certainly going to check out down the road. The devs are promising a 20-30-hour playtime as well, so it seems it’ll be worth the wait.

By Steven Wong20 hours ago
Previews