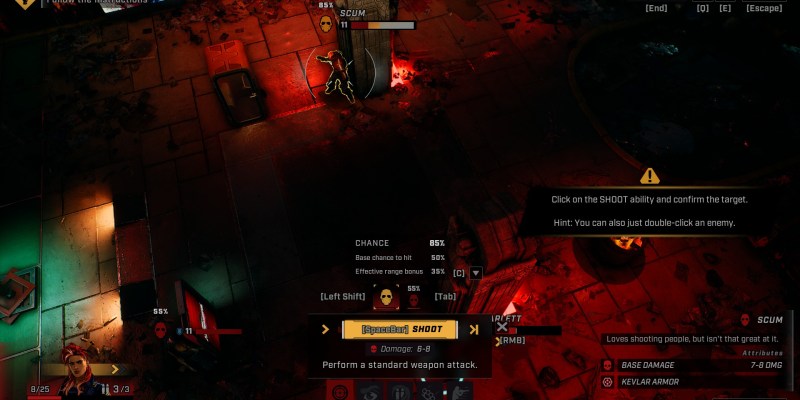 Have you ever watched a dystopian ’90s movie featuring a blood sport and thought, “you know, I wish I could play this as some sort of Mutant Year Zero-type game?” Because boy, is that a fitting description for Homicidal All-Stars, which I had the pleasure of previewing prior to the demo release.

In the future, the shady (is there any other kind?) Omega Corporation has bought a city to turn it into the arena for Homicidal All-Stars. It’s a reality show in which volunteer Contestants fight their way through hordes of Defenders — the worst criminal scum scrambling for their last ticket out of death row. Joining this blood-soaked entertainment spectacle only slightly more ghoulish than actual reality shows is Scarlett, a bounty hunter with an ulterior motive…

So that’s the premise of Homicidal All-Stars. The gameplay, on the other hand, is a mix of real-time exploration (with puzzle solving) and turn-based battles. In this, it reminds me of Mutant Year Zero, a game I dearly loved. The main difference (aside from not featuring talking ducks) is that you don’t get to stealthily pick off enemy stragglers in Homicidal All-Stars. Instead, all battles are presented as miniature missions within the meta-mission of a show episode. They do take place on the same map you jogging through, though.

Finally, a game that has a reasonable explanation for random exploding barrels: they’re there for the show!

Also unlike Mutant Year Zero, the turn-based combat has more granular hit percentages instead of 25% increments. The rest is your XCOM standard, right down to the user interface. For action, you can move once and do an action, you can attack immediately and forgo your second action, or you can just move twice. Characters gain abilities as they level up, and abilities work on cool down timers. As for consumables, you pick up health packs, grenades, etc. at shops and during exploration sections.

While you can go on overwatch, it doesn’t guaranteed hit, and you’ll clearly see how much territory your character will cover. But this is Homicidal All-Stars, and overwatch kills are not what brings in the viewers. Daring acts of violence in battle give you a larger Fame rating, which you’ll need to get sponsors (read: upgrades for the entire crew). The most basic fame-hogging act you can do is kill someone in melee. This is just one of the ways that the game encourages you to play aggressively.

Homicidal All-Stars seems to have given a lot of thought into preventing bite-and-hold overwatch tactics. The AI doesn’t rush your position if you’re far from their entry zone. Instead, they’ll go on overwatch, challenging you to run into their guns. Quite a few skirmishes also have timed objectives; sometimes optional, often vital. As such, you’re always on the move, looking for ways to outflank the enemy and gain the upper hand.

Someone’s getting all their internal organs outflanked!

In fact, one of the early specialist enemy classes is the Fogger. Surrounded by smoke clouds, they can’t be shot from outside of their artificial mists. You can disable that ability for a turn by damaging the Fogger, and what better way to do that than to run into the smoke and punch him. Sure, you could still shoot him from within the cloud, but come on, melee gives you tasty bonus Fame!

Besides, you’re not risking much. If at least one member of your group makes it out alive, everyone else revives without a scratch. Though, Scarlett’s HP does reflect any HP loss she has experienced. That’s because you control her while in real-time exploration map. Revived at 1 HP, Scarlett can perish as you stumble into spiked walls, fail to spot a booby trap, or get doused in flames while trying to get to optional arenas and loot boxes.

OK, fine, overwatch does give you Fame. But melee never misses and doesn’t need to be reloaded!

Equipment and character progression in Homicidal All-Stars are fairly streamlined. You can buy consumables and weapons, but you’ll also find enough of them in the field. And, quite often, the new weapon is a numerical upgrade over the one you have. And you don’t have to worry about optimization: Scarlett only uses assault rifles, Marty only takes shotguns, etc.

The skill trees aren’t that deep either, as they’re a mix of either character specific abilities or plain stat increases, like carrying more consumables or moving further. They do influence gameplay, though. Scarlett is built for aggression and closing in with classic soldier abilities like shooting after moving twice, regaining an AP after a melee kill, and so on. Unforeseen changes are more likely to come via weapon drops. For example, would you switch out your regular dual SMGs for ones that deal next to no damage but always stun?

Exploration can also yield bits of fluff, as well as chances to sign autographs — this gives you the chance to build your show persona, which determines what sponsors you can choose from.

So yeah, the game is fairly simple when it comes to managing characters and gear. In fact, this is probably the kindest XCOM-like I’ve ever seen. Like a good DM in a TTRPG, Homicidal All-Stars is a fan of the player. The game treats you to plenty of autosaves, there’s no shame in restarting a combat encounter, and you can always check the counters to see how many loot boxes, autograph opportunities and optional arenas remain in a level. Heck, once you find the last of each, you’ll get an announcement in uncertain terms that it was, indeed, the last.

Even healing is fairly plentiful, as health stations dot the exploration map.

No healing station on God’s green Earth will save that guy tho.

Homicidal All-Stars will probably be friendly to computers, as well. The game may not be the most impressive looking thing out there on the sheer techical scale of visuals, but it utilizes its resources well. The arenas are unmistakably moodyscenes of a world gone mad with violence turned into a spectator sport. There’s plenty of blood and gore. You’ll never forget that it is a show — but this deosn’t make the environments any less rich. The enemies look great as well, though I wish there was more variety among the individual classes.

And more death animations, too. I love the way heads splatter in this, but come on, I’m going to be clubbing plenty of scum to death. Give me more variety!

The game’s cutscenes are mostly comics, but there’s some good comic book art on display. The in-engine scenes aren’t shabby either.

The sound design is also good, though I recommend immediately turning down the frequency of the announcer commentary because it’s repetitive and there’s a lot of it. For other characters, their dialogue isn’t poory written, they mostly suffer from the ocasional stilted delivery.

All in all, Homicidal All-Stars seems like it will be a fun little game to play. It knows what it’s doing and why, and it offers some real refreshers to an old formula. So while it may look painfully like XCOM, it’s a lot more than a mere clone.