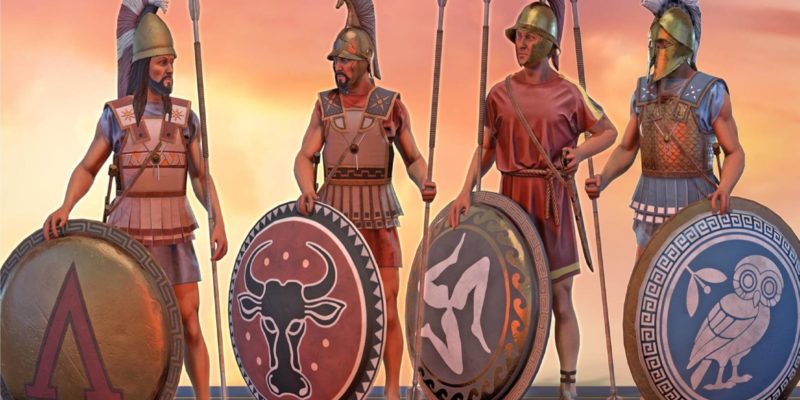 Magna Graecia is the newest content pack for Imperator: Rome. Its release also coincides with patch 1.4, the Archimedes update, which is available to all players. Both focus on the Greek city-states as well as changes to the religion mechanics of Imperator: Rome. Here are some impressions after a few hours of play.

Note: For more information about Imperator: Rome, you can check out our guides and features hub. 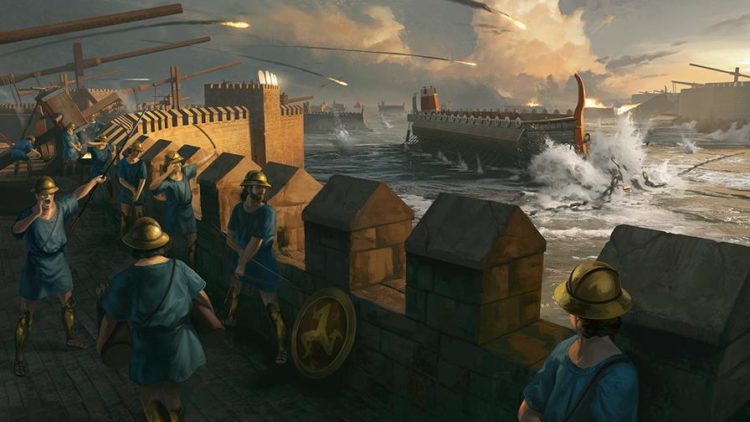 Back in April 2019 when Imperator: Rome launched, it led to a lot of disappointment as noted in our official review. It wasn’t just because of technical woes and a smattering of mechanics from other Paradox titles, it was also due to certain gameplay systems that were never fully fleshed out. One notable shortcoming was its religion feature. I even mentioned that Imperator: Rome‘s religion panel was just “a once-every-five-years button-click to gain a bonus perk or increase stability easily.” It was that simplistic.

That brings us to the Magna Graecia DLC and the Archimedes update which try to overhaul the existing system. From the get-go, you’ll notice a major change here such as the use of pantheons. 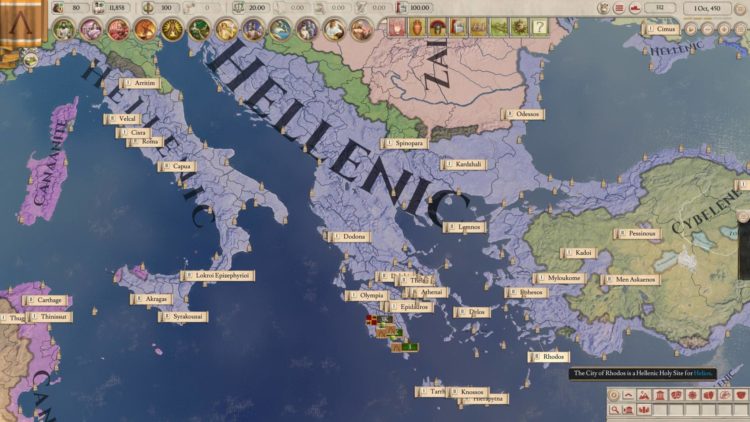 Each nation can select from a multitude of gods and goddesses to represent the four pillars of its pantheon: war, culture, economy, and fertility. These deities provide effects such as a passive buff that’s always present and an active buff that’s only initiated by the aforementioned one-button click (Imperator: Rome‘s omens mechanic).

These effects are further boosted by controlling a holy site dedicated to a deity. You’ll even see the locations of these holy sites when you choose the religion map mode. Some, such as Stonehenge in Cunetio or the Temple of Jupiter Optimus Maximus in Rome already exist at the game’s start date. Others, meanwhile, need to be built or completed via events. 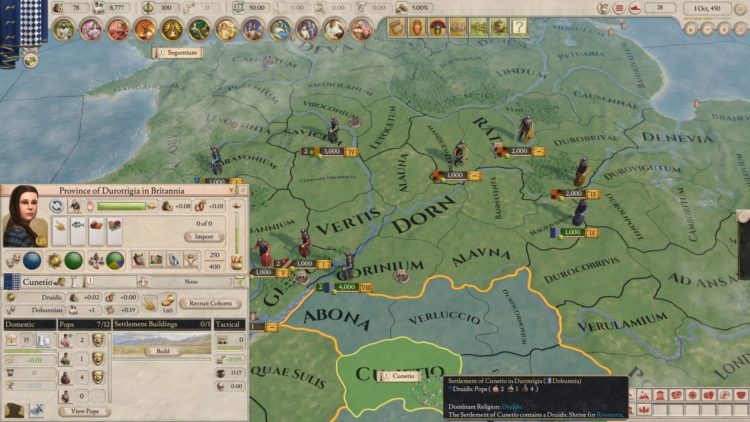 There are also relics and sacred treasures that can be obtained and placed in your holy sites adding further bonuses. Desecrating these holy sites will also let you loot their treasures. Likewise, your ruler may achieve apotheosis. With their divinity proclaimed, they can become part of your pantheon. 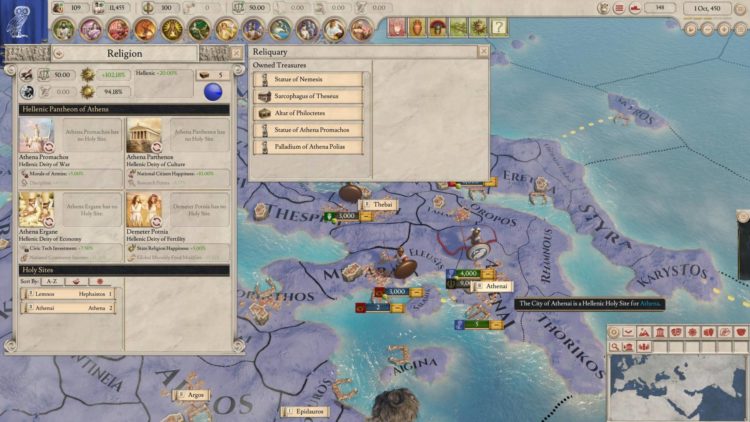 While these changes from Magna Graecia and Archimedes are commendable, I still feel that they’re not as intuitive as can be. Now, fans already know about Imperator: Rome‘s clunky presentation so this becomes even more pronounced.

The first issue is with regards to the UI. Here’s what you see when you attempt to change your deity:

The problem is that the game doesn’t tell you what that nation is even when mousing over those icons. You’ll be left guessing unless you’ve already memorized every flag in the game. Another minor concern is when a temple is desecrated and you have the option to penalize an AI country. You’re not told where those temples are located in a user-friendly way. 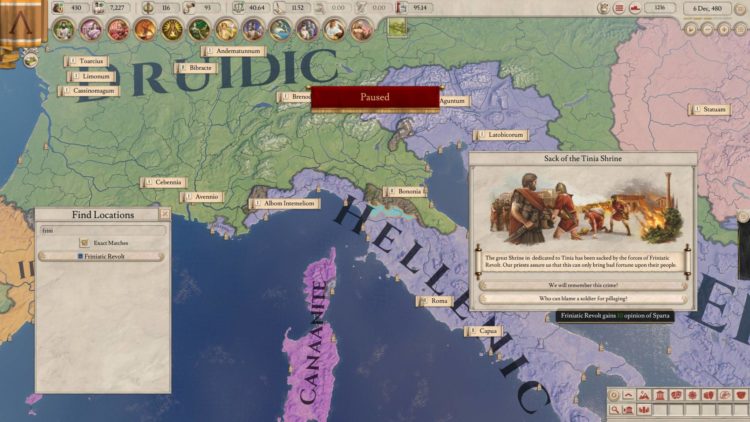 Existing holy sites in your Imperator: Rome campaign can also be confusing at first. For instance, I noticed that playing as Athens gave me control of a holy site to Athena located in the capital. That’s historical and I have no issues there.

The problem? Holy sites pertain to the specific name of a deity. The “Temple of Athena” in Athens only buffs the goddess “Athena” who’s not actively selected as part of your pantheon. Instead, the ones selected by default are her other aspects with different epithets such as “Athena Promachos,” “Athena Parthenos,” and “Athena Ergane,” none of whom gain buffs from holy sites or relics dedicated specifically to “Athena.” 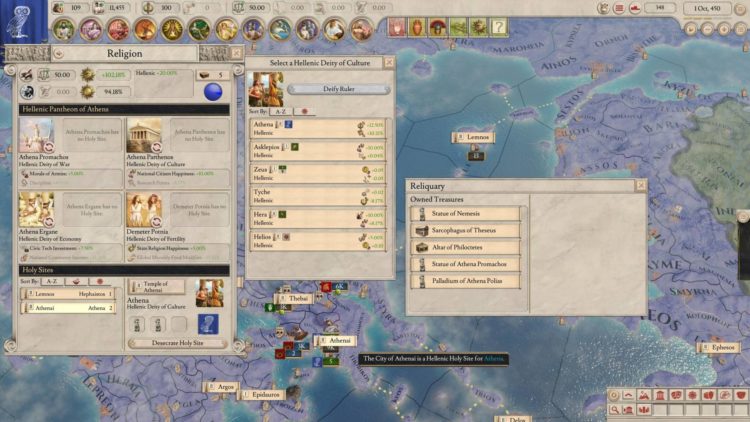 Magna Graecia, the Archimedes update, and the missions of the Greek states

The focal point of Imperator: Rome‘s Magna Graecia content pack, naturally, would be the new missions for Greek states. The DLC has several tasks for those who choose to play as Athens, Sparta, or Syracuse. In addition to these, all Imperator: Rome players will see thematic missions for other nations that are part of the Greek culture group thanks to the Archimedes free update — these include Massalian colonies, minor powers, or the lands beyond the Black Sea such as the Bosporan Kingdom and Olbia.

You can forge a path to rebuild Greek hegemony in traditionally Hellenic territories as well as those in far-flung domains. Some tasks will nudge you towards a militaristic course of action whereas others require a bit of diplomacy. These changes are, again, laudable and very much welcome. Overall, these are steps in the right direction for Imperator: Rome. 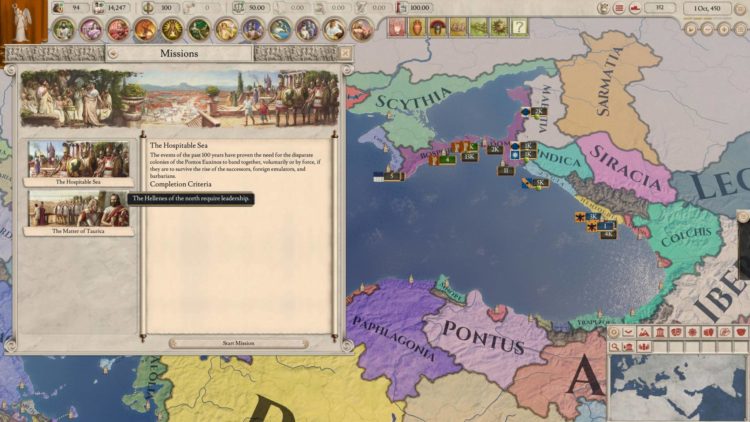 Unfortunately, there are still a number of flaws that are noticeable here. The most glaring one is that only a single mission can be active at a given time. For instance, playing as Athens gives you these two choices:

If you choose the former, you can’t pick the latter (and vice versa) for a time; you can’t even view the other mission’s requirements. Similarly, if you cancel a mission, it’ll take 20 years until you can select it once more. I actually had to restart my Athens campaign a few times after finding out that a certain task in “The Matter of Greece” would automatically give me claims on nearby territories. 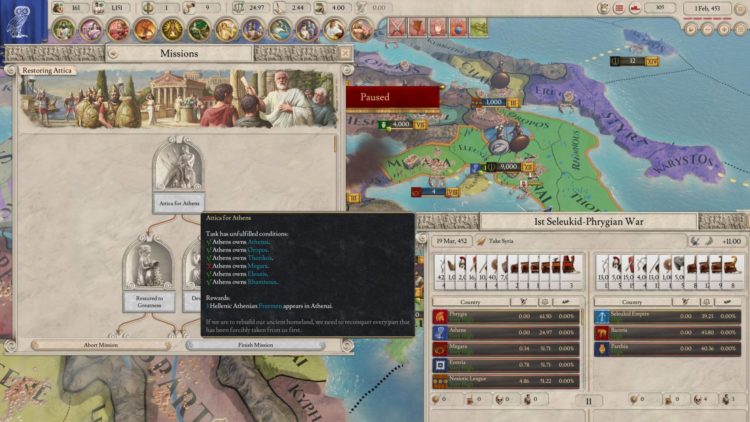 There’s also another problem with regard to other incidents that are out of your control. For example, Phrygia could end up at war with the other Diadochi kingdoms. You’re dragged into this conflict as well since Athens is a subject of Phrygia: 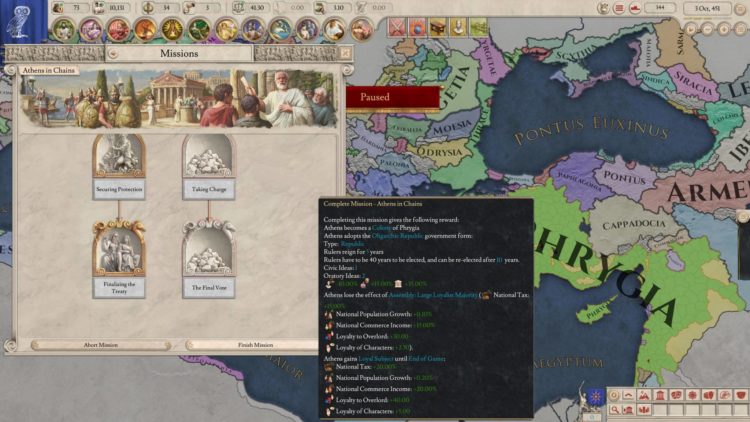 Imperator: Rome‘s dev diaries for Magna Graecia and the Archimedes free update also mentioned how you’ll “interact fairly heavily” with certain characters to complete missions. That doesn’t seem to be the case since tasks remained bland. For example, here’s what I did to gain independence from Phrygia:

If you wish to remain friends with Phrygia:

Actions were very simple, to a fault. It’s as though you’re playing the waiting game until you’ve finished a building or once you had enough resources. 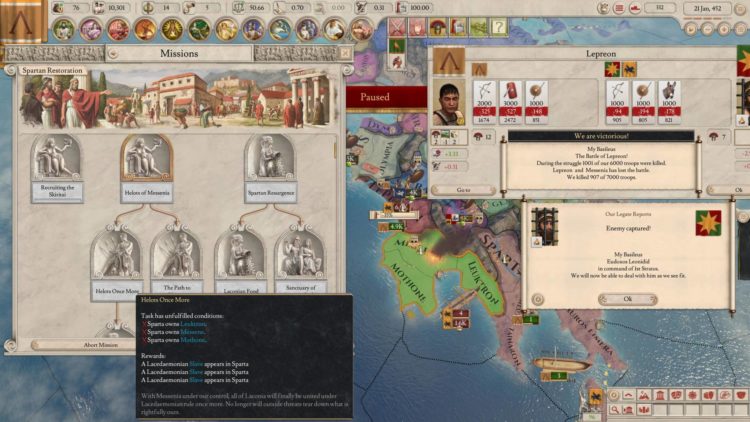 Imperator Rome: Magna Graecia – Losing my religion (and my patience)

Given my frustrations with the Athens playthrough, I also gave Sparta a try. The action did pick up considering that Sparta’s an independent country not beholden to the whims of a major power. Then again, Sparta’s also in a pitiful economic state. The myriad events became more impactful since they tend to waste your measly amount of gold.

Sadly, I also experienced some odd moments. Here’s one mission that could be completed (take note of the population and building requirements in Dyme): 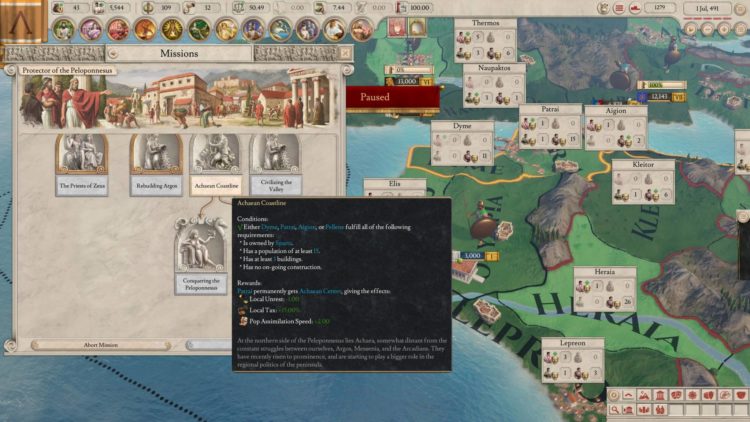 But, here’s another one in Heraia where, even though I knew that I met the requirements, the task couldn’t be completed. It’s weird, to say the least: 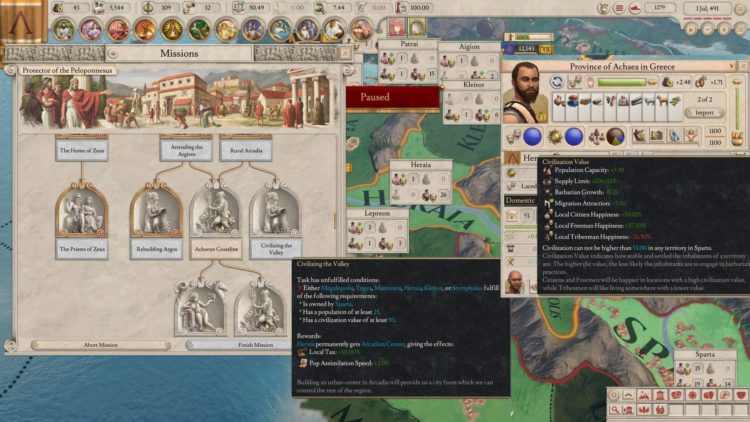 Fast forward 40+ in-game years later, I just went ahead and just took over Athens and Corinth — which would’ve been the next goals for Sparta — having ignored the next mission’s tasks due to egregious and time-consuming requirements. As you’ve guessed by now, a few hours of trying out the Magna Graecia DLC and the Archimedes update left me annoyed still. To a degree, these mechanics and concepts either don’t mesh well together with Imperator: Rome‘s existing features or they’re presented in a very disorganized way.

Again, I’m thankful that Paradox Interactive are continuing their support for Imperator: Rome by adding more content and tweaks. Unfortunately, the implementation and execution of these new ideas remain painfully clunky and in need of user-friendly improvements. 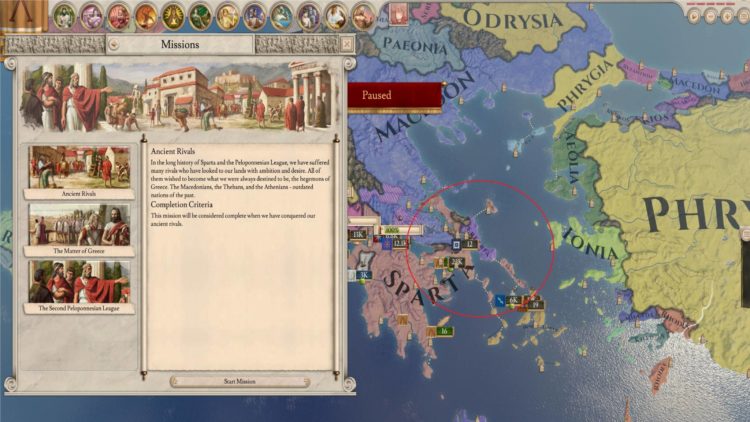 Imperator Rome‘s Magna Graecia content pack is available on Steam. You can purchase it for $7.99. For more information about Imperator: Rome, you can check out our guides and features hub.

Mount & Blade II: Bannerlord – What you can expect from the Steam early access release