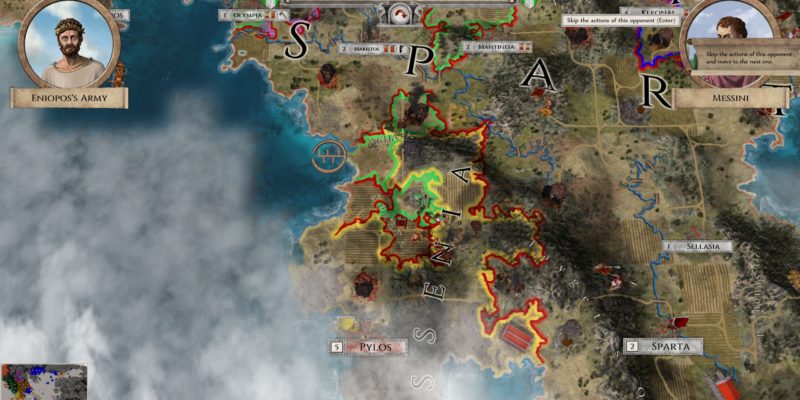 Judging by the title and the subject matter, you would think that Imperiums: Greek Wars is another Paradox grand strategy title. If that happened to you, then you can consider yourself a victim of a ruse: it is, instead, a Hellenic-flavored 4X game.

For a relatively small patch of land that never really considered consolidating in Ancient times, Greece has an outsized influence on the Western world. Well, Imperiums: Greek Wars takes you back to later days of the region, just before the rise of the second greatest Macedonian leader: Philip II of Macedon. The previous king bought the farm fighting barbarians, now it’s your turn to shine. Granted, you can also play any of the other greats of the time… or roll up a completely random map with no relation to any spot on Earth. It’s your Hellas, you do what you want.

While most historical map games are of the grand strategy genre, Imperiums: Greek Wars hews closer to Civilization than anything by Paradox. Your armies will be simple and homogenous, your cities will be producing a single unit (or improvement) at a time, your not-yet-killed-by-Roman-soldiers science nerds will be able to research only a single topic at once, and so on. Suffer not a Messenian to live

But there are some strange grand-strat-isms sprinkled around here and there. There’s a goal system, which tends to be country-specific: for example, Sparta wants to humiliate the rebellious Messenians and to take the Corinthian Isthmus for self-defense. It reminds me of Total War games, but feels a lot less tutorial-heavy. You also have Decisions, which have immediate effects ranging from improved spy networks to slave manumission or building a monument on the map.

But the real weirdness in Imperiums: Greek Wars is on the map. For example, your armies don’t just have HP, they also have troop numbers. How they work in relation to attack strength and health I do not know – perhaps they’re there to make battles feel less abstract. Yet you need to sacrifice a certain bit of  your population to build every unit in the game – and not just settlers as is usual in 4X titles.

Incidentally, settlers also double as your worker units. This works due to two factors. First of all, in Imperiums: Greek Wars’ historical scenarios, the maps are already lousy with cities, so you don’t need to expand that much. Yet you don’t run into much issue of having such expensive workers due to the fact that there’s really not that much work to be done. Most of the time, they’ll be planting fields/farms around the cities and connecting everything with roads. Mines already exist on the map. Building other tile improvements, like blacksmiths and stables? That’s handled via a certain menu. Speaking of improvements: Imperiums: Greek Wars is probably unique in how little you get to do with/for cities. You don’t have to go through the Civilization (Galactic or otherwise) rigmarole of building granaries, libraries, markets, and so on. Instead, you buy improvements for them like you would with units. There are a few tiers of defensive upgrades as well as such early must-haves like “Trading” which makes smaller cities free to run.

Incidentally, map buildings also have access to some of the city upgrades, but I guess it’s a function of the game treating buildings as a type of unit rather than something special.

Who fights in Imperiums: Greek Wars?

Not that you have an overabundance of units in Imperiums: Greek Wars, either. Some are common among all cultures, like settlers and nomads (think “settler that is angry instead of being able to set up roads and farms”), some differ depending on whether you’re Greek, Barbarian, or Persian. Each cultural group gets its unique flavor of infantry and cavalry.

Or, I should, each group gets three tiers of infantryman with unique models and slightly different stats and terrain bonuses, and three tiers of cavalry that follow the same pattern. For Greeks, the infantry would be Peltasts, Hoplites, and Phalangites, each representing an increasing level of technological sophistication. If you allow mythical stuff in your campaign, you may be beset by a rare incursion from the underworld.

That’s it. That’s what you’ll have for most of the game. Hope you like pushing Hoplites and Peltasts around, because, boy (or girl), Phalangites are somewhere at the top of the research tree. Of course, you can get to play with the Persian versions if you take a city specialized with building them, but you’re still playing with just two distinct (infantry and cavalry) unit types for a campaign that lasts tens of hours.

And be prepared to lose your troops a lot. In Imperiums: Greek Wars, the winning strategy is to hit an enemy unit twice per turn. Why? Because just like most units have a single attack per turn (meaning you can only attack once), they also have a single defense. What happens if it gets attacked twice? Well, their Health drops by 30% for every defense after the first.

Outnumbering is extremely important, kids, though it’s not the only thing. I’ve seen both units get wiped out in battle multiple times. I’ve also seen nearly intact infantry units just kill themselves attacking a town. And as I mentioned, losses aren’t that easy to replace. The text under the battle result rarely makes sense.

But it’s not only about buying new units. It’s also about healing them. Imperiums: Greek Wars has a ridiculously convoluted system for doing so. Sure, they can heal a nearly imperceptible amount of health a turn themselves. You can also order them to self-heal, which tanks their defensive stats in exchange for making the amount of healing look almost visible. You can draw recruits when next to a city, which costs money, citizenry, and experience points. The king of healing is “heal inside” which can only be carried out in cities that can build the requisite unit… but it’s not free and it lowers the loyalty of your troops to that of the city’s.

I guess that’s one way to stop you from just steamrolling all enemies by taking city after city. Another one? Cities get damaged in the fight and need to be repaired to regain function. In extreme cases, cities require “emergency aid,” which is an even more expensive type of repair… and they’re on a timer as well! I’ve seen cities lose 80%+ of their populations after going without “Emergency Aid” for a turn, and it’s enough to wipe out a town in two turns. Sometimes, a dude will distinguish himself in battle, becoming a hero. Tears will well in your eyes as you remember that this was the way to make random captains into actual characters in Medieval 2: Total War, but not in any of the later games.

Then again, I’ve seen cities riot themselves to death as well!

And those aren’t the game’s only quirks, as it’s made almost entirely of little oddities tied together with a bit of gameplay. The visual aspects of Imperiums: Greek Wars leave a lot to be desired as well. While the infantry generally looks OK on the map, the game isn’t much of a looker, and both buildings and boats suffer massively in both the model and texture departments. The interface is merely OK, some of the illustrations are just photos with a few filters applied, and the leader portraits for the nations… could have been drawn better. There’s not much to say for the audio side, either: the music is on the level of “I guess it’s there,” unit barks don’t exist, and the rest is… present.

Imperiums: Greek Wars is a strange take on the 4X genre. I would want to say “unique,” but the word would carry a connotation of it being good. Sad to say, I can’t claim that it is a good game. Oh, it works, but outside of setting and quirks, it doesn’t have much else going for it. Let me tell you something: it’s a lot more exciting to try and explain its oddness than actually play it.

Imperiums: Greek Wars offers a few twists on the usual 4X genre - like being more historical than Civilization's History-of-Mankind Thunderdome - but the execution isn't really there to make it worthwhile.