Most times when a first-person horror game pops up, I expect it to be super short and not particularly compelling. In Sound Mind doesn’t come close to having either of those issues. It’s billed as a survival horror game, and it sort of is, but that’s a bit misleading. While you do carefully look around for supplies in the dark as dangerous enemies search for you, there’s also action, platforming, Metroid-esque exploration, puzzle solving, and more. The game isn’t quite what I expected, which was a good thing, as it exceeded my expectations to deliver one of the year’s best adventure games.

In Sound Mind sees you controlling a therapist named Desmond Wales. He wakes up in a facsimile of the building his office is located in, but something is wrong. Strange things had been happening to Desmond’s patients prior to the start of the game, and he’s been persistently hounded by a strange man who only identifies himself as Agent Rainbow. The kicker is that doors to four of his patients’ apartments show up in the building, leading to cassette tapes of their recorded therapy sessions. Only, playing the tapes leads Desmond into strange worlds stalked by twisted versions of their owners.

The story seems a bit silly at times and some of the voice acting isn’t great, but I very much enjoyed the narrative of In Sound Mind. You never really meet any other characters face to face, but the game’s levels are full of context and insight into their lives and struggles to the point that you get a great feel for everyone. Everything comes together to make sense in the end and there are a lot of really clever things going on even in the incidental details. It’s hard not to be impressed by the consistency and attention to detail in the writing. You’ve made a fool of everyone

In Sound Mind is played in the first person and the game’s structure lends itself well to reinforcing both forward momentum and exploration. As Desmond, you need to get into your patients’ apartments, get their tapes, and then go into them to confront what they’ve been twisted into by mysterious external forces. There are four patients and most of their rooms have different obstacles barring your entry. Much like Metroid, you’ll need to find new equipment to get past these.

They’re not always obvious. The only time I got legitimately stuck in the game was because I couldn’t figure out how to get past a barrier that blocked the second patient’s room. Turns out, I needed to use a gun to shoot barrels, which would explode. Only, the game didn’t teach me to do that and I thought I was supposed to be carefully conserving my ammo at that point. As you find new equipment, you’ll also be able to explore In Sound Mind‘s areas for stat-raising pills. It takes three of these to raise one of the levels of your four stats.

After a bit, there isn’t much more to see in the hub, however, as the game mostly focuses on that in the beginning. Most of the meat is in the four main levels, which are all huge and usually take a few hours to get through. In Sound Mind is of a decent length and took me about 13-14 hours, although I did my fair share of exploration. Once you complete the fourth main level, a final section opens up and you can go on and beat the game. Once you beat it, you can return to before the ending to continue exploring either the hub, or the levels, at your leisure. There’s a truly surprising amount of variety to In Sound Mind‘s gameplay. You find a lot of equipment, half of which are weapons. But even weapons have their practical uses, as the gun and gas barrels mentioned earlier demonstrates. Your melee weapon is a shard of a broken mirror that can cut police tape and break boards. It also allows you to find enemies and items by reflecting the world back at you. It’s quite clever. There are more too, such as a flare gun that dispels darkness and a radio that can power certain things on and off.

The levels all take place in areas that we’ve seen in games before, such as abandoned supermarkets, and factories. But all four levels look and feel massively different. The forms Desmond’s patients take all have totally different rules and you’ll need to contend with them too. One is a woman that you’ll often have to sneak past unless there’s a mirror to lead her to. The one I hate the most is a shadow creature that can only follow you in darkness, so you’ll have to fight it back with your flashlight. It reminded me of Alan Wake, a game I don’t really like.

As for what you’ll be doing, it’s the usual for these types of games. You’ll be finding items and using them to solve puzzles. Each level has you finding items or code pieces that let you accomplish a thing, which usually allows you to confront your patient. The level design is fantastic on top of this, although certain sections can drag or were too tedious for my liking. The worst was one where I had to solve a complex conveyor puzzle while an enemy searched for me. Having to contend with both was a giant pain and I ended up using a couple of suicide runs to memorize what to do. Skin of my teeth

On the normal difficulty, In Sound Mind is decently challenging yet rarely frustrating. Every now and again it’ll put you in a tough situation, but the game always gives you enough supplies to dig your way out. You don’t need to conserve your ammo or be especially careful at any point. It is possible to get autosaved into an especially tight spot if you’re unlucky, though, but it never happened to me.

The game ran okay for me, often holding the line at around 60 fps on my 5700 XT. The game’s visuals won’t blow anyone’s mind, but the team avoids utilizing props and set pieces that it couldn’t afford to make convincing. I feel like the optimization could be a great deal better, though, but I’m glad it runs well enough. There’s also a cat you can pet. Repeatedly. She talks and chides you for wasting time petting her when you’ve got bigger fish to fry. There’s a particularly funny achievement you get the first time you do this too.

The game was developed by We Create Stuff, the team responsible for the Nightmare House 2 mod for Half-Life 2. Honestly, In Sound Mind reminds me of Half-Life in a lot of ways, and this is a good thing. Tightly-scripted scenarios based around careful navigation, jumping, and running from danger are one of the best things about it. I look forward to playing it again once I forget a lot of the smaller details. It’s not often that you get to see so much creativity and tight game design in one place, after all. 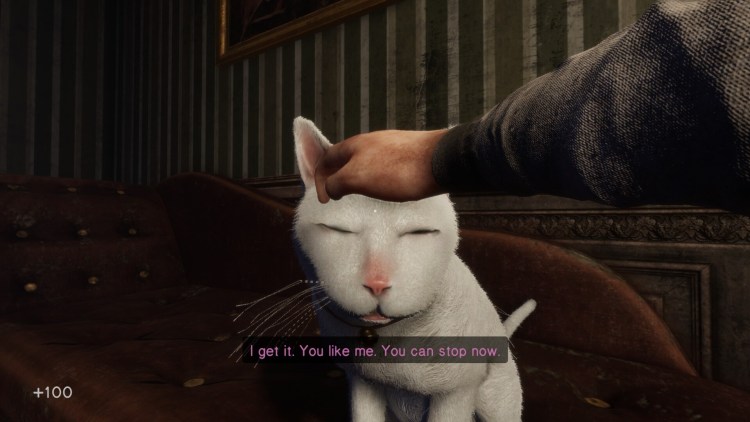 A psychological horror game with a focus on narrative consistency and gameplay variety, In Sound Mind is a great time due to excellent pacing, level design, and pure ingenuity, even if it's not particularly scary.