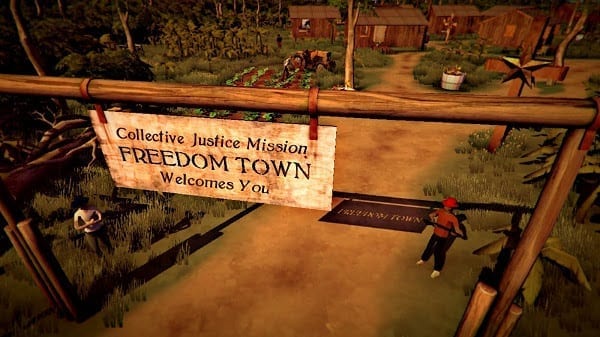 Paranoid Productions‘ The Church in the Darkness is ambitiously tackling some heavy themes and ideas. What does it mean to belong, and how can a cult subvert that need to their own sinister ends? As ex-cop Vic, you’ll need to go undercover to discover the secrets of the Jonestown-inspired Freedom Town. The game has been in development for several years now, but it’s finally getting close to their day of judgment.

The South American compound of Freedom Town is home to the Collective Justice Mission. Rebecca and Isaac Walker are the enigmatic leaders of the group. To them, Freedom Town is supposed to be an escape from the evils of the world. Racism, corruption, and poverty were all to be erased in their socialist utopia. Everyone is equal. Everyone can belong. Those ideas sound pretty good, so it makes sense that they have recruited so many members. As with any cult, though, their true motives remain mysterious.

Now, they have brought Vic’s nephew into the fold. As such, it’s up to you to find a way to get him out. The Church in the Darkness lets you go about this in a number of ways. You could stealthily search the cabins for evidence, chat up members of the faith, or simply get aggressive. How you decide to play will influence which of the multiple endings you’ll see in the end. On top of that, there are multiple scenarios for you to test your wits against.

You’ll need to be careful. The leadership is teeming with paranoia. Claims of assassins among their ranks have them on the lookout for those out of place. They’ve armed their true believers and won’t go down without a fight. Do whatever it takes to get your nephew, and yourself, out alive.

The Church in the Darkness will be welcoming new members on August 2.