Ghost Song has finally launched after years of hype and we’re happy to present an interview with the game’s developer, focusing on planning, navigation, and more. The game is atmospheric and buoyed by strong exploration and compelling character portrayals. I greatly enjoyed my playthroughs, so I was eager to pose some questions to the game’s developer, Matt White, who was kind enough to give some insight into his work.

PCI: I’ve never seen a mechanic quite like the arm cannon heating up and then doing more
damage for melee. Was that inspired by anything in particular? If not, what led to its genesis?

MW: This was the result of a series of choices born from a desire to push the player closer to
enemies. I was having trouble designing interesting enemy behavior and thought it’d be more
fun if you had to go closer to them. Reducing the default gun range was a start, putting limits on
how much you could shoot was another start, and adding melee was another start. Before long the
combination seemed obvious to me. Having that synergy encourages mixing things up.

PCI: Ghost Song uses the same kind of character-based side stories as the Dark Souls series,
albeit in a much easier-to-follow way. What made you want to include something that’s usually
so cryptic but use it in such a different context?

MW: There was a point early on when I wanted to have a silent protagonist and NPCs that spoke in
riddles, but after years of development and basically starting over (for a range of reasons), I kind
of grew out of that phase, in part because it had become so played out it started to seem like a
meme to me. Having relatable characters with understandable motivations felt right almost right
away, and I’m happy with how that turned out. We still have some mystery and weird lore, of course,
but the game is very grounded in its characters.

PCI: I’m definitely getting modern Metroid vibes from the way free-aiming with the cannon works.
Was that intentional? If so, was there any other inspiration from the recent Metroid games, aside
from the obvious similarities?

MW: The game originally began as a flash game that was closely aping Super Metroid. At the time, I
never thought we’d get another 2D Metroid. To me, the free aim felt like a natural evolution of
the simple aim controls in Super Metroid, and that Samus Returns came along with a similar
system was a coincidence. Over time, especially after development rebooted about 4 years ago, I
really wanted to move the game more towards being its own thing, and that’s when melee and
heat mechanics and the like came into the picture. 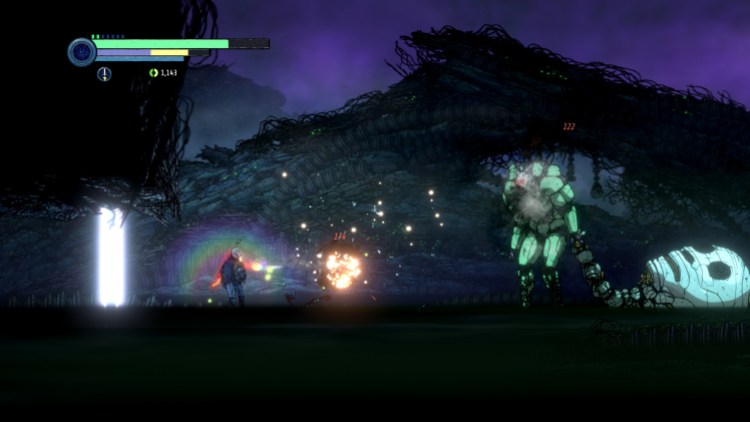 PCI: The explorer mode obviously greatly opens up the game to players that don’t want a hard
game or Souls-like experience. How long had you planned on including such a feature and are
you worried that players who choose it will miss out on a lot of the core experience offered by
the intended difficulty?

MW: The explorer mode is somewhat easier, but it doesn’t radically change the experience, I
wouldn’t say. It actually came along late in development. I didn’t originally have plans for
multiple difficulty modes, but following feedback from certain players who were frustrated by
some of the difficulty and especially some of the penalties associated with failure, I started to see the appeal of having a mode to help those players out a bit. I made sure to let the core
audience know, through the in-game description, what the original intended experience is.

PCI: Having so many different modules massively opens up the way player choice affects the way
Ghost Song plays. What’s the hardest part of balancing different
modules so that they give players noticeable benefits without too much of an edge?

MW: That’s the magic question. It’s definitely hard putting a ton of options into a game and having
them all be useful but not too useful. My approach was, for the most part, to just put things in
there and have people try them, and make adjustments if something is too useless or game-breakingly good, and aside from that, not worry too much. Some items or tactics will
undoubtedly be more powerful than others, and I think that’s okay. It’s about having choice and
just playing in a way that you think is fun.

PCI: Finding power-ups behind breakable walls is one of the joys of games like this. How did you go about making these easier to find than they would have been otherwise?

MW: Depends on the wall. Some are designed in a way that will seem more obvious to the player.
From a design standpoint, you can use a lot of little tricks to draw someone’s attention to a
breakable wall without them knowing that’s what you’re doing. How the geography is framed on
screen, what pulls your eye towards what point… Or sometimes just put an obvious signal like an
out of place flower or other decoration on the wall. There are definitely more obscure secrets,
though, that aren’t meant to be found as easily. 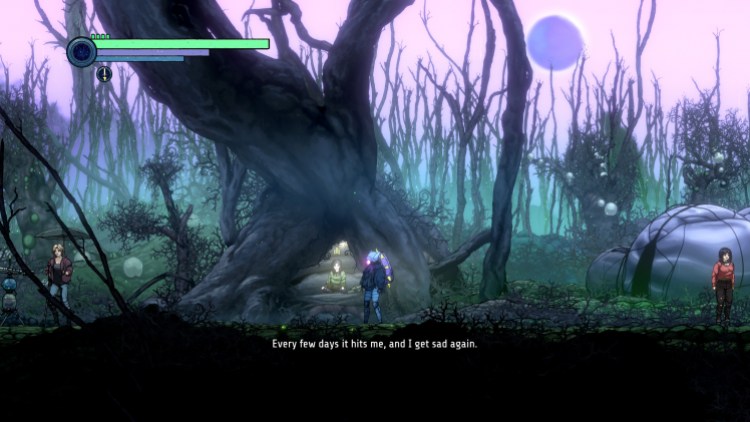 PCI: The melee weapons and energy attack modules greatly change the way players handle
combat. Were there any that didn’t make it into the final game that would have made other
substantial differences in terms of gameplay?

MW: Quite a few weapons and modules ended up on the cutting room floor, either because they
were too pointless, too hard to balance, or just too hard to make work properly. Early on, the
combat design was imagined to be based highly around finding the right weapon to use against
the right enemy, as enemies were originally planned to have drastically different resistances to
different damage types. This aspect of the game still exists to a degree, but it was greatly de-
emphasized because at some point I saw the need to stop overcomplicating the game in so
many areas.

PCI: Would the team ever entertain the idea of a difficulty mode that only does away with dropped
nanogel and the need to repair Deadsuit after death, while leaving all the other difficulty aspects
alone? I think players who don’t mind difficulty but are less than crazy about Souls-like features
might appreciate that.

MW: It’s an interesting idea. No time to do that around the launch window, but who knows what future
updates could hold.

PCI: I love that players can choose to tackle the ship parts in any order of their choosing. I noticed
that getting the wall jump before the blue ship part allows players to basically skip right to it.
Were there any worries associated with letting players trivialize sections or is that just part of the
fun?

MW: Not really. Rightly or wrongly, I had the concept in mind that allowing some things to potentially
be easier or shorter than expected if done a certain way keeps expectations in check, makes it
feel like you truly don’t know what kind of experiences you’re headed into. 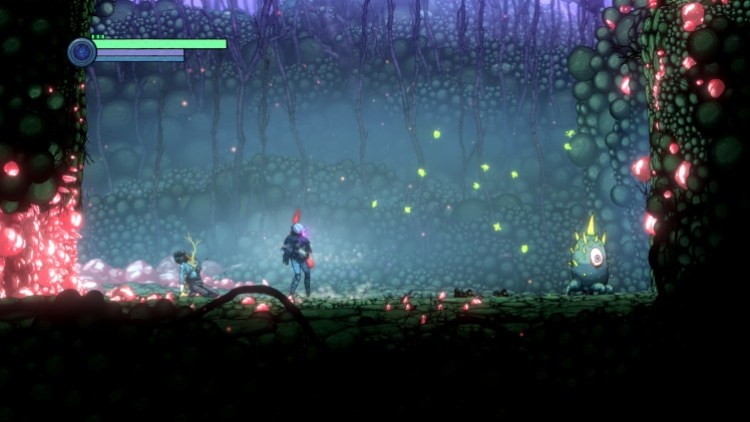 PCI: There’s a decent amount of voice acting in Ghost Song, but much of the dialogue is still
unvoiced. How were decisions made regarding what should be voiced and what shouldn’t?

MW: I came up with the template pretty early on. Typically, voiced portions “bookend” an encounter
with an NPC. So you get a voiced interaction as you approach, then you get a text-focused body
of conversation, then a voiced interaction as you finish. So you start and end with a voice. Of
course, it would be even better if 100% of the dialog were voiced, but that would have taken a
lot more time in all regards, and when doing a game mostly by yourself you need to find some
corners to cut at times.

And there you it. We’d like to thank Matt for this insightful look into his process and the navigation design behind Ghost Song for the purposes of this interview. Make sure to check out our review of the game if you haven’t already.