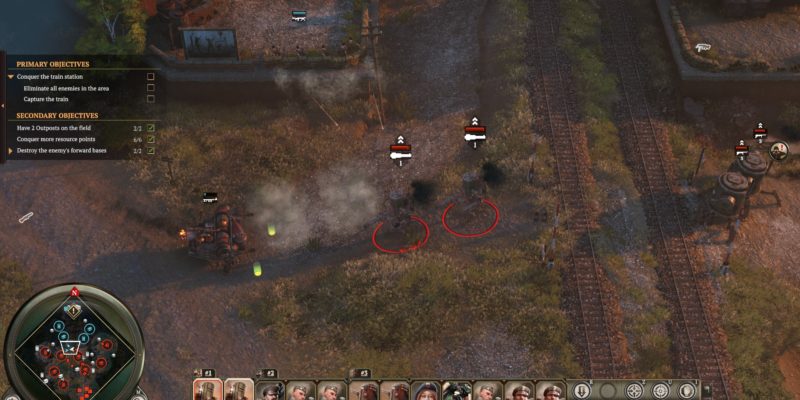 You could describe Warhammer 40,000: Dawn of War and Company of Heroes as revolutionary RTS games. That is, if not for the fact that almost no games followed their example, and their sequels actively squandered it. If there’s one thing certain though, it’s that when Iron Harvest was announced, the plentiful comparisons to Company of Heroes were true.

Iron Harvest is set in the 1920+ universe created by Jakub Różalski, and expanded upon in the excellent board game Scythe. The game allows you to take control of the forces of Polania, Saxony, or Rusviet sometime after World War I — but with mechs — ended. In the campaign, half of Polania is occupied by the Rusviets. The truce between the three powers is shaky. Anna Kos, a village girl with a rifle and a bear, is about to get involved in some serious stuff.

Indeed, Iron Harvest is dieselpunk Company of Heroes. There’s less of a focus on pinning, and you have mechs instead of tanks (or other vehicles for that matter). But you can trace the lineage back to the WWII RTS. It’s a shame that so few other creators ever tried the same.

Tesla coils are going out all across Europe

Let’s get back to the basics for the benefit of the people who don’t carry the flame for a 14-year-old RTS game. Just like what is traditional in the genre, Iron Harvest lets you build a base and use it to construct units to go out into the field and fight the enemy. They also capture resource extraction points (iron and oil) as well as strategic points that accrue victory, er, points (unless you’re playing for HQ destruction). However, unlike in say, the Command and Conquer series, the base building aspect is very rudimentary to the point where you can only put down buildings in a set base area and there’s only three of them in total. Even the original Company of Heroes had sprawling bases! 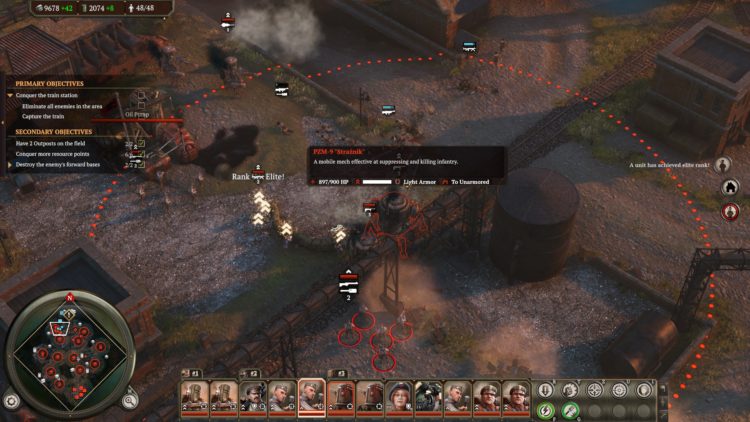 “Stražnik” is made for two things: mulching infantry in the open and exploding once it sees an anti-mech unit.

One interesting twist in Iron Harvest is that you choose your faction after you launch the skirmish/multiplayer game, but before the map loads. You are then given the choice of one of three heroes to take to the field. Heroes have a certain cost in reserve points and come in either the first or second reserve wave. Infantry heroes tend to be cheaper and come in the first wave, while mech supercombatants tend to be expensive and come in the second.

Of course, you can also add other units to the reserve waves. A cheaper hero can allow you to get more of the other units. Other than that, the reserve wave system is a tax for increasing the population limit, and it’s price is independent of what actually comes in the wave.

Outside of bringing in heroes, providing a boost in population strength, and possibly getting several units on the field simultaneously, the reserve system doesn’t matter too much. You’ll be constructing the larger part of your army in the base. HQ produces engineers and the basic infantry of the faction. Barracks build all types of infantry, weapon teams and exosuits. Likewise, the workshop is the place where all the mech magic happens. These buildings also have to be upgraded to unlock a second, more powerful tier of units.

Infantry in Iron Harvest is built in uniformly armed squads. It’s a huge break from Company of Heroes, which placed great emphasis on upgrading units with single heavy weapons. However, if you destroy a squad, it will drop its equipment. It can then be picked up by any infantry squad, which transforms it into the appropriate unit type. This is also what happens when you chance upon a crewed weapon that has been, uh, de-crewed. The whole squad – unlike just a few members in Company of Heroes – take over the weapon. Likewise, you can reclaim the squad by ordering it to abandon the weapon system (which is good for running away, as crewed weapons move like snails). 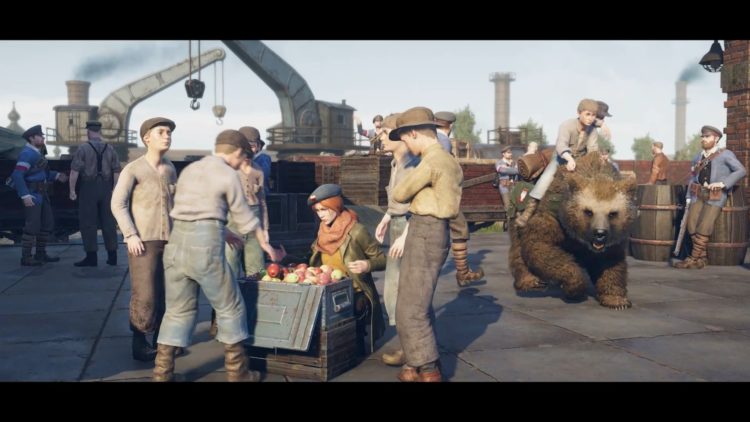 Fun fact: if you mention Wojtek the WWII Polish bear to any student of history, you can see them die a little inside.

Iron Harvest is less prone to fun nonsense like Company of Heroes, which let the humble rifle squad grab a dropped flamethrower or a German LMG to get some additional firepower while still retaining its primary role. There’s still flexibility to this system though, and the campaign does a lot to make you stop worrying and learn to love the equipment changes. It’s in the missions where you don’t have a base to build reinforcements — commonly the most exciting missions in any RTS game — where you start to appreciate the utility of having your grenadiers take up the engineer kit for a spot of repair or your rifle squad transforming into an LMG squad.

Iron Harvest thus incentivizes the players to retreat their squads — especially the non-basic ones — instead of letting them get wiped out while holding the line. It also allows canny players with basic infantry to quickly tech-up, as basically anything short of an exosuit can be picked up in the field.

And people complain about lack of variety in historical games

Now, this is usually the time where you talk about how different the factions are, but they really aren’t. In Iron Harvest, the infantry of the three countries may look and sound unique, but they’re really all the same mechanically. While there are some edge differences between the basic Polonian Riflemen, Saxonian grenadiers and the Rusviet Vanguard (armed respectively with rifles, SMGs and shotguns), an LMG team is an LMG team, Medics are Medics and so on. 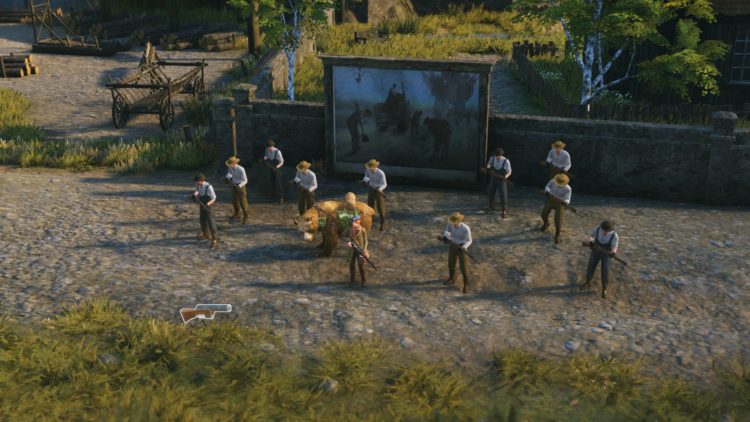 The campaign has quite a few bespoke units, like armed villagers. Jakub’s art dots the landscape.

Each faction has the same three buildings for unit production, and there are no unit upgrades to be researched in Iron Harvest. The biggest difference here is in which factions unlocks what infantry with the first tier of barracks, the guns that bunkers get, and, I think, that the Rusviets don’t natively build Medics and LMGs (they can still steal that equipment in the field).

It’s the mechs and the heroes that really set the factions apart. I absolutely adore the light and fast “Szmialy” mech that the Polanians have, as it’s basically a mechanical rifleman that acts as a scout and a light mech hunter. I don’t have much love for the Rusviet mechs, as they are kinda ugly and ungainly even when compared to the squat and boxy Saxonian ones. Though “Brunhilde” the Dieselpunk AT-AT probably takes the cake for mech ugliness.

Building mechs is not rocket science

Mechs, especially multiple mechs, present a big issue to forces that don’t tech up in time. Regular infantry will have issues even with the lightest types (especially with the Rusviet flamethrower one, since it ignores cover), while anti-mech infantry may struggle with the larger beasts (though it’s still not a great idea to send out mechs unsupported). I think it’s upon the mechanic balance of the mechs that the overall balance of the game rests. Some mechs are in desperate need of a few more development passes, like Polania’s nearly useless artillery mech, or the woefully slow heavy mech hunter.

And while most units in Iron Harvest have their own strengths and weaknesses, there are two types that stand out in their dubious usefulness: Medics and Exosuits. 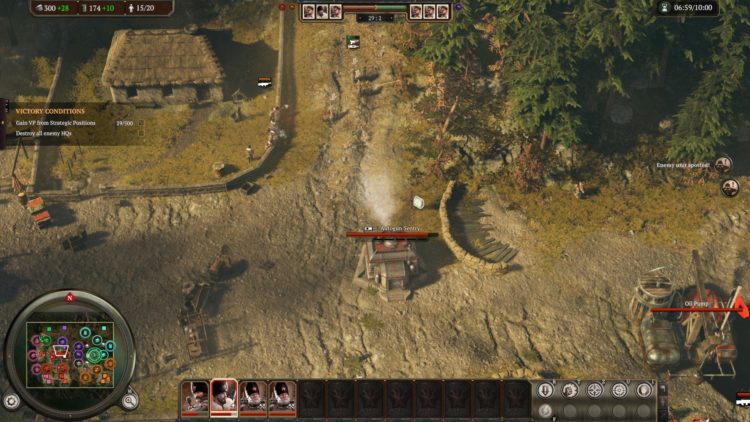 No matter the faction, I’m extremely reliant on armed bunkers to hold the line.

No matter the faction, Medics don’t heal anyone automatically – they have to be micro-ed. While they can be consumed to turn them into aid stations (providing frontline squad reinforcement capability), this requires them to reach veteran rank.

The problem with this is that it requires them to fight, which they’re terrible at, and heal (micro), which is a pain in the ass. Sure, the Medics can reinforce squads without sending them back to base (which is instantaneous no matter where you do it), and healing HP is free (unlike reinforcing), but it’s still a chore. If they at least had a passive healing aura, they would be worth it. As it is now, Iron Harvest is probably the first game where I entirely forego troop healing.

Exosuits are the type of infantry that are actually markedly different between the factions of Iron Harvest. Rusviet units use rocketpacks to jump in close and beat stuff up in melee (yes, there’s melee in the game, and no, it does not shut down weapon teams from firing their cannons at the people stabbing them), Polanian units can shoot and Saxonian units are mortars that can punch stuff. Between their low speed, low numbers, high price and particular susceptibility to anti-mech weapons, they are just not great.

Don’t get too heroic out there

The heroes are an interesting addition Iron Harvest makes to the Company of Heroes formula. They are powerful and have abilities that no other unit can match, but they’re not immortal. Anna Kos can be taken down by machine gun fire almost as quickly as a regular infantry squad, and mech heroes still have the weaknesses of mechs. The heroes are force multipliers rather than victory buttons by themselves.

It’s a pity that at the time of reviewing, the game only has a few skirmish maps out. And I played the campaign, so I know that the devs can absolutely do an amazing job in creating fun, atmospheric maps. Truthfully, the skirmish maps became boring way back when Iron Harvest had a free demo weekend, so hopefully it will improve in the future. 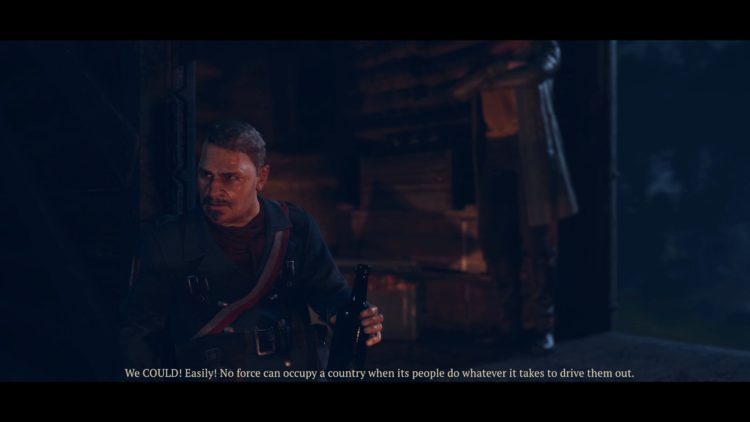 “IN-ENGINE CUTSCENES” should be bolded and underlined at every developer studio making a Company of Heroes-inspired game.

As you might guess, Iron Harvest is a visually impressive game! It amply demonstrates this in the in-engine cutscenes (just like in Company of Heroes), which only lack in the facial design, and the fights look great. There’s smoke, there’s fire, mechs are exploding, infantry is running about and the maps present you with beautiful vistas that are soon destroyed as heavy mechs walk through buildings like they’re paper (buildings are a lot less useful as cover than they are in Company of Heroes).

The audio is great as well, especially when Iron Harvest presents you with the option of using the native languages (with subtitles) in the campaign. After playing it in English, I can only agree that it would be the superior option. Other than that, the music is fun, the sounds of battle are smooth and there are plenty of unit barks to roll your eyes at. Strategy game developers keep ignoring the power of unit barks at their own risk – and I’m glad that Iron Harvest did not fall into the same trap.

Iron Harvest is one of the few RTS titles to take after Company of Heroes, and it does so in a unique way. Maybe some of it is due to budgetary constraints, or maybe those were conscious decisions to get the right gameplay that the developers wanted. Either way, the game is fun and good in a way the forsaken sequel to Company of Heroes never was.

Iron Harvest captures most of the charm of Scythe and Company of Heroes while lacking some of the stuff that makes the latter so much fun.

Gods & Monsters may be going under a different title now