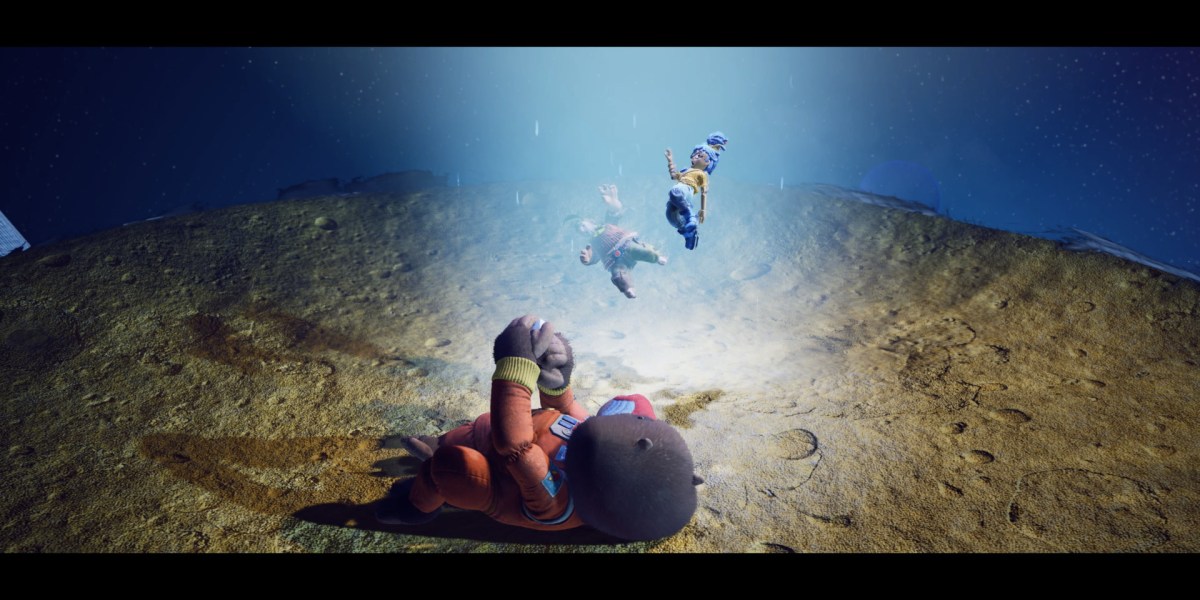 Recently, I had the chance to play the entirety of Hazelight Studio’s most recent co-op exclusive showcase, It Takes Two. Luckily, our friendly, neighborhood Reviews Editor Andrew Farrell had a bit of free time this weekend too, so we both dove in. Mercifully, the review-writing process is a single-person experience.

Andrew: Not so fast, Sonny Jim. It Takes Two is a co-op game. It took two of us to play it, so why wouldn’t it take both of us to review it?

Blake: I would just like to state for the record that this is a terrible idea.

It’ll be fine. Has anyone ever told you that you worry too much?

Oh. Well. Great, we’ve got that covered, then.

It Takes Two tells the story of a little girl named Rose who uses witchcraft to turn her parents into dolls. All for the purposes of torturing them due to their impending divorce.

To be fair, I think it was a bit more earnest than that. The poor little girl just found out her parents were splitting up, so she was crying. Her tears just so happened to fall on dolls that she made of her parents. How was the kid to know she was inadvertently practicing voodoo?

Why, that sounds like something a witch would say, Blake. I’m on to you. Her parents, May and Cody, awaken in doll bodies, only to be told by a terrifying book monster named Dr. Hakim that they’ll need to fix their relationship to have any hope of reclaiming their fleshy forms. The story in It Takes Two is of remarkably good quality, and the script is well written. 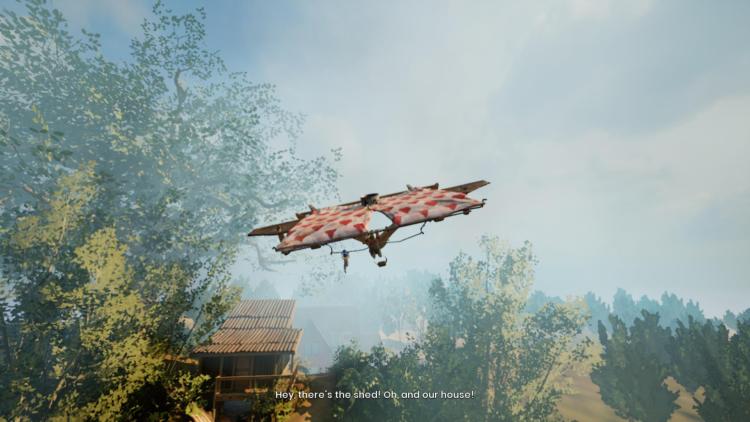 As you might imagine, the process of them finding common ground is one hell of an adventure, to be sure. But having to drag their partner’s dead weight around for countless hours? I wonder what that must feel like, Andrew?

For sure. Big talk for the guy who ended up minutes behind me in that part in the ice level.

Structurally, It Takes Two is divided into nine levels, each with its own themes, unique assets, and gameplay mechanics. Blake picked May, a snarky, exasperated Englishwoman, while I picked Cody, an easy-going house husband. Each level sees May and Cody attempting to accomplish a specific task that has therapeutic underpinnings.

“Therapeutic underpinnings,” might be a bit generous, considering that in one stage you are literally fighting alongside squirrels decked out in full military outfits. Show me where that appears in a textbook, and I’ll eat my hat.

The therapy angle is heavier in some levels than in others. The first act, for instance, mostly focuses on the two of them making it back to the house, while later acts are focused differently. 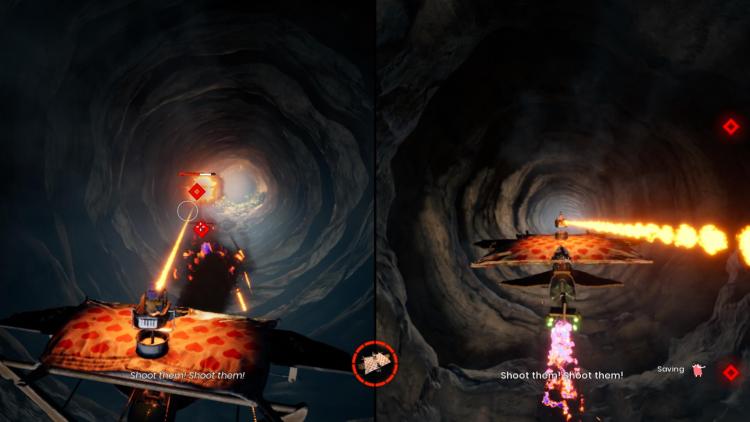 Each level in It Takes Two is typically over an hour in length, leading to a game that was much lengthier than either of us imagined. Overall, it took us about a dozen hours to get through, which seems quite long for a co-op only game. This was bolstered by fantastic level design, with large, detailed areas that have huge amounts of personality on offer.

Personally, although I felt that at points it was trending towards being too long, the quality of the experience allowed it to never overstay its welcome. And let’s not forget about all of the minigames. These huge levels had numerous opportunities to whip up on your partner, Mario Party-style.

Yeah, those were a blast, such as the tug-of-war and Whac-a-Mole games. I recall beating you almost every time, Blake.

So much to do, so much to see

The only thing more impressively varied than It Takes Two’s level design is its gameplay. Each level grants May and Cody unique abilities they’ll need to solve notably different sorts of puzzles.

Luckily you brought me along. If you were on your own, you’d have been hosed! While no puzzles were overwhelmingly difficult, there were so many different mechanics at play. Occasionally, it wasn’t easy to remember what you actually could do at any given moment.

Like when I forgot Cody could shrink himself 20 minutes after getting that ability.

Exactly! Or how about the time I forgot how to use the magnet panels to jump from position to position? 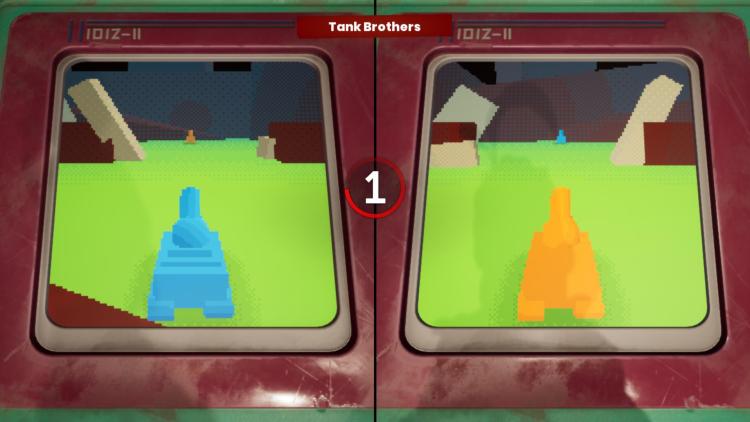 Come to think of it, the puzzles came together in a highly satisfying manner. Whenever either of us got stumped for a bit, the other was always able to get it. It certainly did take two, huh?

That’s like the reviewer’s equivalent of a dad joke. For shame. Luckily, there was nothing shameful about how much variety is at your fingertips in It Takes Two. Each character’s powers were brilliantly designed in a way that abilities were polar opposites, yet they were still exclusively dependent upon each other.

The cooperation-focused abilities keep things fresh. In one level, Cody has plant powers, while May can use a sickle and spray gun.

Another time, they are actually the opposing poles of a magnet. As you can imagine, there are numerous uses for the forces of attraction and repulsion.

In either case, as Blake mentioned earlier, it gives the characters totally different combat and puzzle abilities. And the genre even changes at times. The game is a puzzle-platformer at heart, but one minute you’re manning a plane, another you’re playing a competent Diablo-esque ARPG.

This is fairly remarkable, considering it meant the developer created numerous different standalone stages, on top of the base game’s design. Probably the most surprising aspect is that, despite all of the vastly different gameplay experiences, the controls were spot-on throughout.

Both characters can double-jump, dash, swing on grapple points, and grind on rails regardless of their current abilities. And everything is consistently responsive and accurate.

If only the same could have been said for both of us. 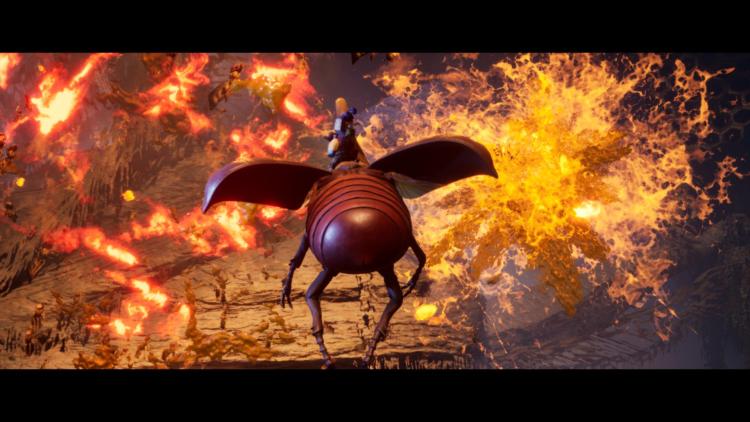 Visually, It Takes Two is staggeringly lush and vivid. This is clearly a high-production game and quality pours out through every facet of its being. It ran beautifully for me at max settings with nary a hitch to be seen.

The one exception to the rule was any time there were animations featuring excessive flourishes. These included Dr. Hakim’s entrances, exits, or any water-based effects. These tended to drop my framerate down into the single digits momentarily, but given that it was only during cutscenes, it was more than acceptable.

Considering you were running the game at 4K on a GTX 1080, it’s quite a feat. There was also that weird period where the game repeatedly hard crashed my PC when Blake was hosting, forcing me to host instead. Fortunately, these were all experienced on pre-release code, so they will likely be addressed in the final retail version. 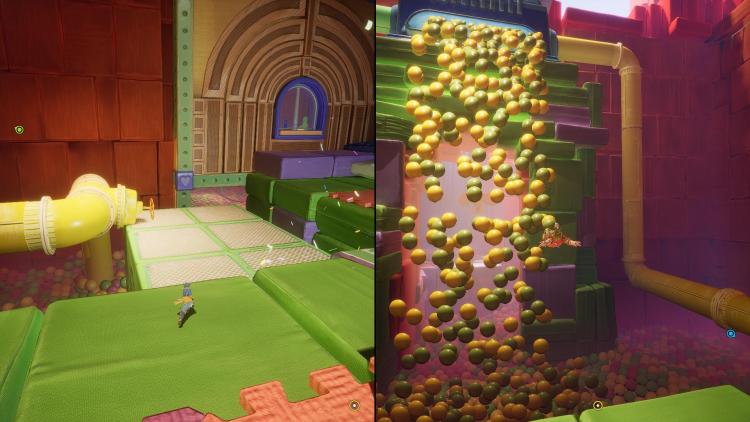 My only real complaint with It Takes Two is that it doesn’t have much of a finale. The game builds to a climax, but then just kind of halts right before the finish line. However, at around a dozen hours, the game’s length was already more than adequate in the end. But I was still a bit underwhelmed by the lack of a level to really tie things together. Still, It Takes Two is a lengthy, enormously creative game, filled with top-tier level design and gameplay that will likely be enjoyable to players across a broad spectrum.

I cannot wait to play this with my non-gamer wife, who will undoubtedly latch onto the game’s larger themes of relationships and embracing personal passions.

Once you beat it, there’s plenty of reason to jump back in for another playthrough too. Trying the other character will let you experience a lot of different gameplay elements.

Completing the entire campaign from the alternate perspective helps reinforce all of the care that went into crafting something this cohesive. 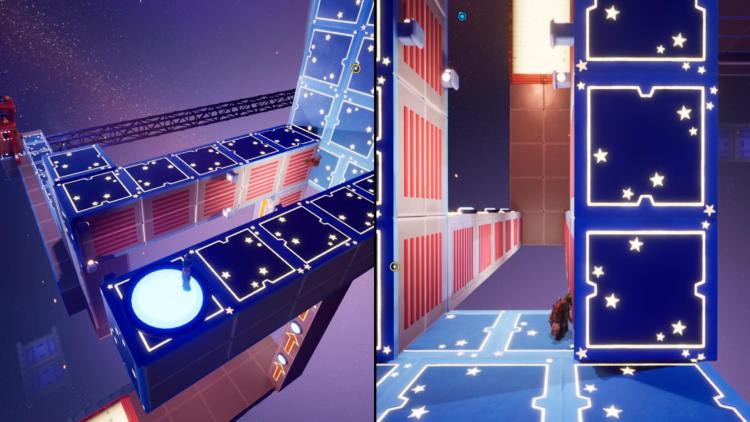 You know, this hasn’t been the worst experience in the world. Who knew that you and I could actually manage to coexist, without killing one another?

I told you it’d be fine, didn’t I? But it makes me wonder. Was it due to our own inclinations that this was settled amicably, or do we have Dr. Hakim to thank?

If we have to thank that guy, I think I owe my first marriage counselor an apology.

Come to think of it, I’m starting to wonder if Dr. Hakim’s even a real doctor at all.

A fantastic presentation buoyed by constantly enjoyable, varied gameplay and wonderful level design make It Takes Two a must-play for fans of platformers. And even anyone who's ever wanted to play a Pixar movie.

By Kurt Perry3 hours ago
Reviews

By Iya Paterno3 days ago
Guides

By Matt Henzel4 days ago
Features