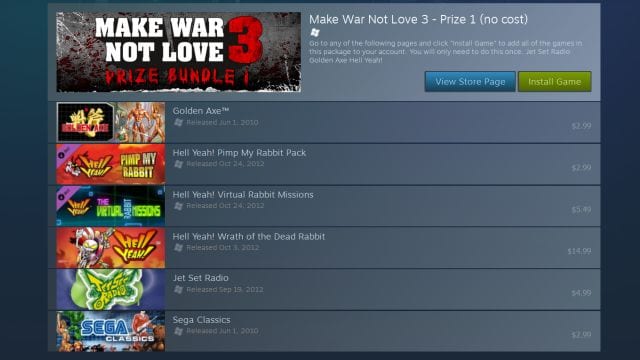 SEGA’s ongoing ‘Make War Not Love’ event (which pits players of Total War and Company of Heroes against one another), has issued a first set of rewards. This ‘Prize Bundle’ consists of Jet Set Radio, Hell Yeah! Wrath of the Dead Rabbit and Golden Axe.

They’re all free, and can be claimed through the link above, or by finding the Make War Not Love promo banner inside Steam and following the trail to the prize bundle. I’ve tried this out, and the three games are, indeed, now on my Steam account for no cost.

Judging by the main MWNL page, there may be more freebies to come. At the next stage, Binary Domain, Streets of Rage II and Condemned will apparently be up for grabs. Assuming enough people keep playing Total War and CoH games, anyway.