Kathy Rain is one of the best AGS adventures I’ve played in a long time, and as what appears to be a work of passion crafted largely by one person, it’s really quite extraordinary. It also left me with a fair few lingering disappointments, some of which – in fairness – were due to my own mismanaged expectations. In short, regardless of the various criticisms and issues I’m going to mention: if you take anything away from this review, it should be the very first sentence. Kathy Rain is really rather good.

Set in 1995, it tells the story of the titular Kathy Rain, a rebellious, punky journalism student. When her nosy roommate discovers that Kathy’s grandfather has just died, it reunites her with her estranged family and sets her on a path to solve a sanity-sapping mystery involving disappeared persons, mental illnesses, and something unexplainable that rendered her grandfather near-catatonic. 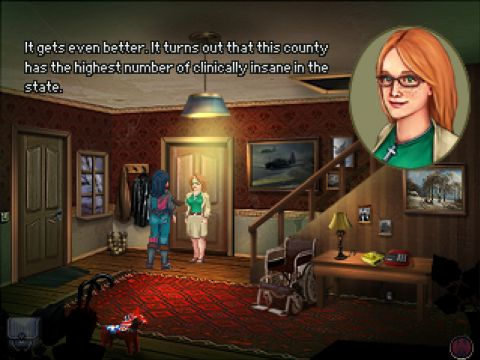 Eileen has a very strange definition of “even better.”

It’s a strong premise and a good mystery, and Kathy herself is enough of a snark factory that I thoroughly enjoyed examining every object in every room just to hear her reactions. Her dialogue is well-written, evoking just the right kind of mid-90s teenage rebellion; her voice acting has just the right level of self-righteous disdain. To put her in musical terms, I’m writing this review while listening to Sonic Youth’s Kool Thing, because that was the sort of song that was in my head when I sat down to write these sentences.

Also, I suspect a fair few people are going to thoroughly dislike her as a protagonist. That seems entirely fitting and makes me like her all the more, somehow.

However, I can’t say Kathy Rain was quite what I was expecting. The description of the game and the email accompanying my review code noted that the game has mature themes and taboo subjects, and this might upset and anger some people while causing others to reflect. While that’s not exactly untrue, it put me in mind of something like The Cat Lady or Life is Strange, which this is absolutely not. 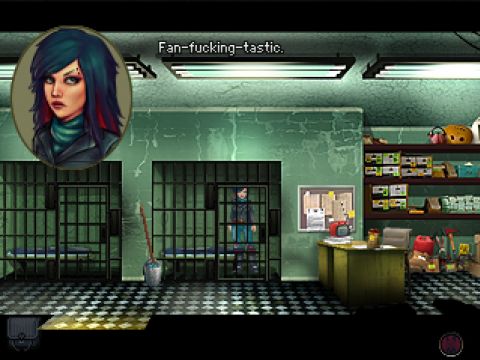 The Cat Lady is one of gaming’s bleakest depictions of depression and I’m still not going to talk about Life is Strange without spoilers, but it hit me pretty hard several times. It’s hard to say whether or not the themes here – guilt, absolution, and a lot of rather more specific things that I can’t mention for spoilers – will impact you, of course. That’s the joy of themes and subjects: they hit different people in different ways. Nonetheless, there are one or two scenes that honestly feel out-of-place, pointless, and stereotypical; the first visit to the biker bar in particular had me sighing so hard I nearly exhaled my lungs.

Anyway: these descriptions and the opening chapters had me expecting something like The Girl With The Dragon Tattoo, while the actual game is a lot closer to Gabriel Knight with a brief stop-off in Twin Peaks. And for what it’s worth, while I’m offering up a lot of comparisons, Kathy Rain wears its inspirations pretty heavily on its sleeve. Someone investigating the supernatural who rides a motorbike (Corley Motors, in this case), asks people questions based on what’s in their notebook, and spends quite a lot of time at their grandmother’s house because their grandfather is somehow involved in the mystery? Sounds familiar…

Right, enough comparing this to music and films and books and other games. Let’s actually talk Kathy Rain. 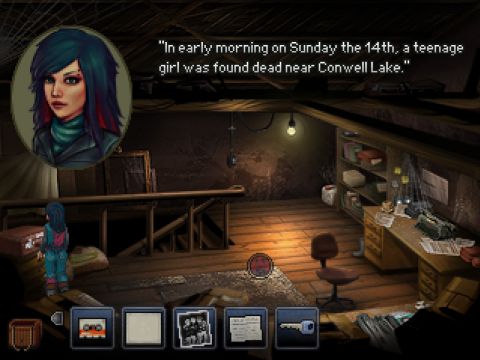 So why the hell does Kathy’s deceased grandfather have this old newspaper clipping locked away? Hmm.

In terms of presentation, it’s basically as flawless as an AGS adventure gets. The pixel art is crisp and gorgeous, the portraits are large and vibrant, the atmosphere is generally rather unsettling – not least thanks to the music – and the voice acting is some of the best I’ve heard in the AGS adventure genre. The latter isn’t too much of a surprise as the voice direction was apparently done with the help of Wadjet Eye Games, who’ve been getting better and better as time goes by, but there really weren’t any voices or lines that felt off. About the only issue is one line in which Kathy shouts and it goes past what the microphone can handle, causing a bit of distortion-y static (I think the term is “clipping” or “peaking”, but audiophiles are free to correct me) but that’s pretty much the only presentational issue I picked up on.

It’s also an adventure game with actual puzzles. None of them gave me a great deal of trouble – I didn’t have to go and seek hints from the studio at any point – but they largely balance on that fine line between being clever enough to offer satisfaction, while simple enough that they don’t frustrate. A few are delightfully inventive, and there are even some really clever takes on logic puzzles (normally the bane of any adventure game) which give you a very clear idea of what you’re trying to do, but you have to puzzle out a riddle on the way. 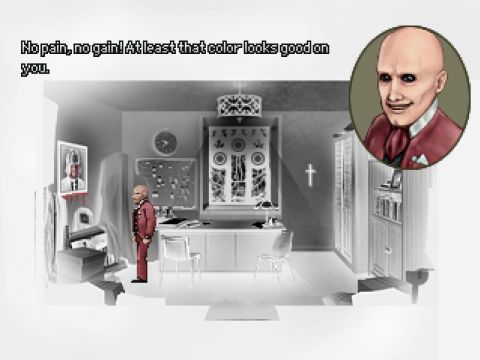 AND THEN THINGS GET WEIRD.

Puzzle balance is really important for adventures, so I’m incredibly pleased with this. Too many adventures either get so wrapped up in storytelling that they resort to “USE item you just found ON thing blocking the way” or head directly into completely insane game logic to slow down your progress. This doesn’t really do either. Also, you can hold down the space bar to see all interactive items on the screen, which I am always happy to see.

A couple of areas are markedly weak, admittedly. In Gabriel Knight fashion, Kathy’s notebook serves as your prompter in conversations, and a few bits of the game are bogged down with asking everyone about everything, or having to go back to Grandma Rain’s house to look up an address in the phone book or ask her who somebody is. Doing this once feels real-world logical. Doing it several times made me annoyed, not least because there’s no good reason why I can’t ask the small-town police officer about where the self-storage facilities are.

Also, I really wish Kathy’s notebook would offer up basic descriptions of characters, plot events, and discoveries, rather than just the stuff she’s currently figuring out. There were a few times I wanted to refer back to make sure I was right about something, but couldn’t. No big deal, though, and that would’ve required a lot more text and dialogue. 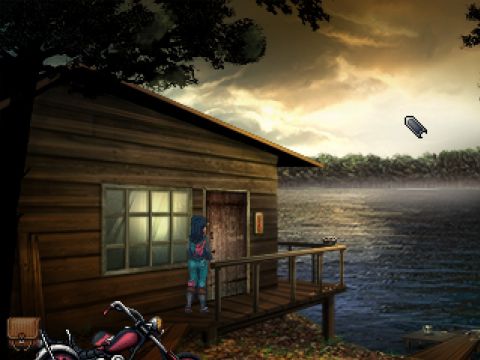 Then there’s the story, which is a bit more of a “Hmm.”

I said earlier that Kathy Rain has a good mystery, and this is true: the plot is good, despite a few twists you’ll see coming, and I repeatedly staved off going to bed so I could unravel just one more piece of it. It’s just that it tries to do a little too much without necessarily earning it, and I’m going to have to be cryptic to avoid spoilers.

While the plot is about the mystery, the story is more about Kathy growing as a person and dealing with a variety of tragedies from the past. But… it’s not the longest game in the world (likely around 4-5 hours, depending on how you find the puzzles, and whether or not you do what I did and click on literally everything to hear Kathy’s descriptions) and there’s not a lot of time given to exploring these aspects before they’re resolved. A few bits and pieces could’ve been emotionally wrenching – hell, a couple are – but most miss because there isn’t enough build-up to them. 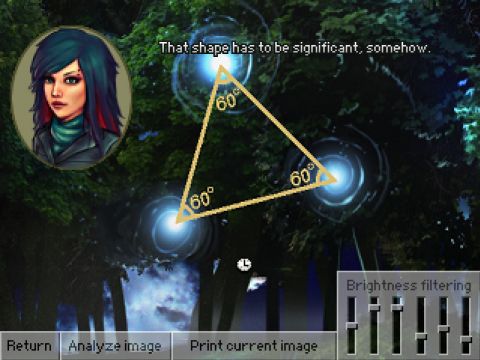 Except it… kind of isn’t. Not the fact that it’s an equilateral triangle, anyway. If it is significant, it’s not really explained in this game unless I missed something big. On the plus side, the computer puzzles are fun!

Equally, while the game’s final area is… well, kind of amazing, the supernatural aspects of the story aren’t particularly well-explained. On the one hand this is good, because horror never works if it’s explained away. On the other hand, being left with a vague feeling of “Wait, so… what?” isn’t a great conclusion to a mystery; there are a fair few plot threads and hints that are pretty much discarded by the end, like the heavy emphasis on mathematics early on. A sequel to explore some of these aspects would be lovely. Or even a sequel which completely ignores these issues. I don’t care; I’d just like more, please.

Then again, some things may be more understandable on a second playthrough. When looking back through my screenshots to pick and choose some for this article, I was seeing the pictures of the dream sequences and some of the odder elements in a slightly different perspective.

Basically, despite these issues – a lot of which, I suspect, are down to budget and time constraints, not to mention the fact that it’s practically a one-man-game – I highly recommend Kathy Rain. While the ending isn’t entirely satisfying and while only some of the emotional punches actually land, the journey to that slightly underwhelming finale is one that’s well worth taking.