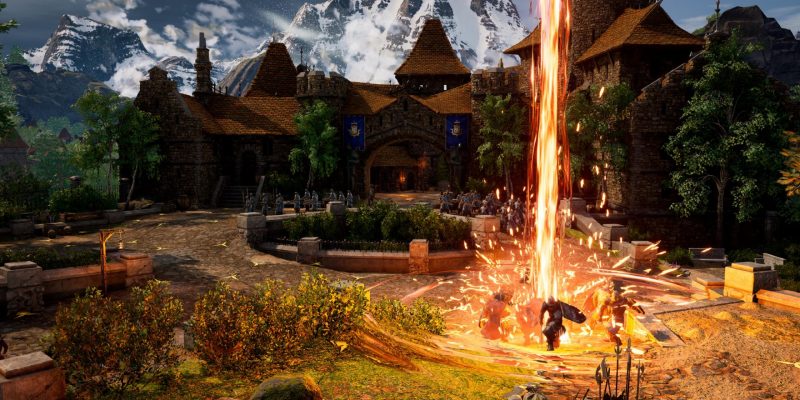 You might think I’m in denial about my age, but dammit, I’m not old, even if this King’s Bounty II preview makes me feel that way. The original King’s Bounty — one of the important precursors to army-raising tactical-strategy-’em-up Heroes of Might & Magic — came out in 1990. It’s 31 years old, everyone, and I spent way too much time playing it.

I also spent way too much time playing its 2008 spiritual successor, King’s Bounty: The Legend (hell, I reviewed it), and that game’s own sequels. And now, after those six-ish games (depending on how you count them) we’ve finally got… King’s Bounty II? Yes. King’s Bounty II.

Yeah, that was my reaction too. I asked 1C Entertainment’s CEO Nikolay Baryshnikov why this is something they consider the sequel to the original King’s Bounty, and not a sequel to the The Legend successor series, or its own thing.

“At some point, we decided that we needed to get back to series roots. After all, The Legend is an excellent game, but [it’s] a ‘light reboot’ of the whole series and not a direct sequel,” Baryshnikov told me. “This is a big new step in the series. The natural evolution of all those ideas that its original creators laid down.”

And there are changes and evolutions aplenty in King’s Bounty II. Some are big, some are small, and some are particularly striking. The most immediately noticeable change is to the perspective. Rather than a bird’s-eye perspective, this particular game has us wandering around in full third-person view as whatever hero we choose.

In that respect, King’s Bounty II resembles a modern-day CRPG (computer role-playing game) rather than the army-building tactical strategy RPG it actually is. You roam in third-person, perhaps mounting your horse to speed up travel. You talk to people with gold exclamation marks above their heads, accept quests, and explore and fight through the world at your leisure.

It’s not a pure open-world game, although other developers might call it as such. Baryshnikov described it as a “corridor world” — it’s huge and there are plenty of paths to go down in whatever order you choose, but you can’t roam anywhere you like. In the segment I saw, this is hidden pretty well: you’re not glued to roads and there are off-the-track places to visit, and anything blocking you from wandering off tends to feel quite naturalistic, whether it’s a cliff, a bridge wall, or a thicket. 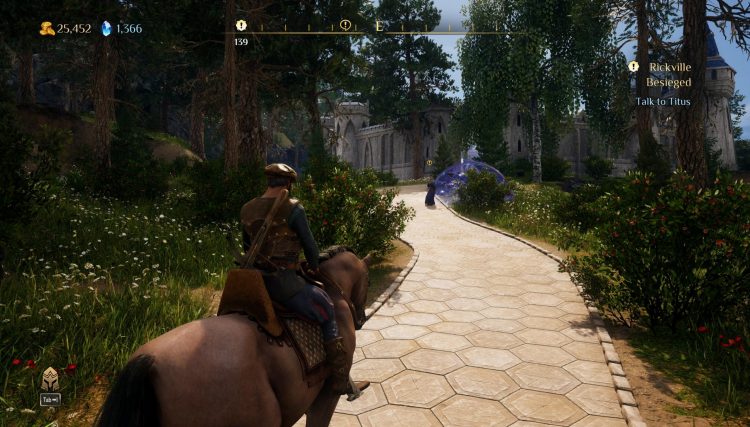 Probably not the expected perspective.

This giant, fully 3D world also plays into the combat. When one of the many turn-based battles starts, it starts at that location. The place in the world is divided into hexes, and all the landmarks that were around you are part of the battlefield. Further elements like high ground and line of sight are incorporated into this, and so too is the environment itself. If you’re fighting in a wide-open field then you can expect the battleground to be quite large, suggesting you might want lighter, quicker units than if you’re fighting in the close confines of a dungeon.

But possibly the most intriguing thing to me is the Ideal system. This is kind of like King’s Bounty II‘s equivalent of a talent tree, but it’s also combined with its morality system.

There are four Ideals: Order, Anarchy, Power, and Finesse. Each of these has its own talent tree, but perhaps more importantly, each is also tied to how you finish quests and how your character develops. Quests have multiple paths and multiple outcomes, and your rewards are very precisely tied to these.

As an example, let’s say you’re dealing with bandits. If you side with the villagers and fend off the bandits, then you’ve finished the quest in an Order way. You’ll get talent points to spend in the Order tree, which will tend to boost units related to that Ideal. On the other hand, if you side with the bandits, you’ll get Anarchy points instead. From the sounds of it, the way you choose to finish quests will also tie into the units you’ll be able to unlock and recruit: if you want to grab yourself some undead units, you’re going to have to side with the undead at times. Not necessarily a “bad” thing either, as undead aren’t inherently evil. 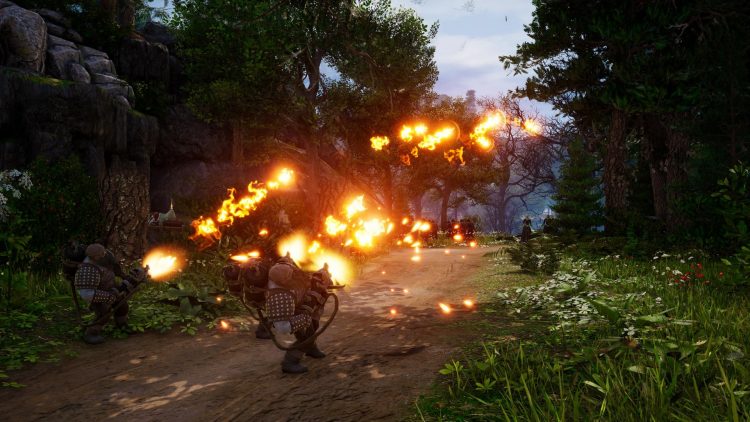 But what pushes this a step further is that the Ideal doesn’t just shape your character in a mechanical sense, but in a more personal sense. If you spend hours upon hours doing nothing but good deeds and becoming a paragon of Order, you’ll actually lose access to the ability to finish quests in an Anarchy way. Your character can’t just turn around and go “Actually, I’m going to side with the bandits now” if they’ve done nothing but good deeds up until then. You could see this as taking away from player agency, but I actually rather like the idea of my decisions having far-reaching repercussions in exactly this manner.

And, naturally, the world itself and the challenges you face will be impacted by this. Anarchy characters might be able to talk their way past a bandit leader everyone else has to fight, while a character who finished an earlier quest in a particular way might get some unexpected assistance in that battle. 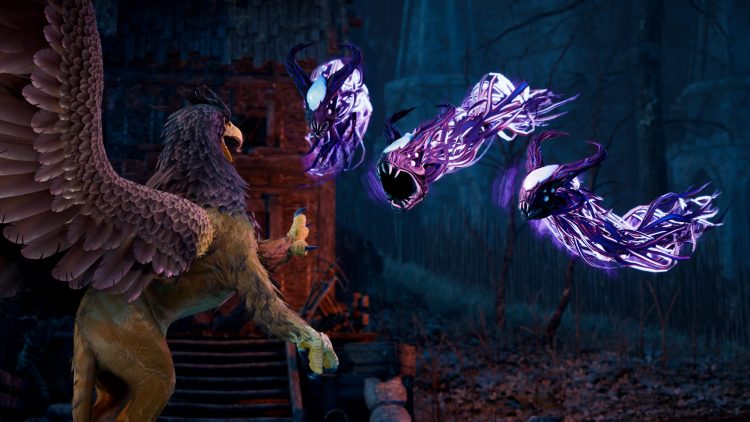 Anything that’s not a Blight creature can be recruited, be it a soldier, a zombie, or a dragon.

With all of that said, you’re not locked to one Ideal, and your character isn’t going to start refusing your choices immediately. Apparently you have to go quite far into a tree before that starts happening. You can also mix-and-match to create a kind of subclass of your own; while things like Order and Anarchy oppose each other, you can certainly pick up a few points in each, and you can heavily invest in, say, both Anarchy and Finesse.

Combine this with the varied units you can pick up, the ability combinations and interactions, and the three characters you can choose from to start with — each of whom is an actual character with a history in the world, unique methods of solving quests, and their own strengths and weaknesses — and there’s a lot of potential for varied playstyles and replayability.

“All three [characters] have a different class (warrior or mage, for example), other starting special abilities (some of them can cast spells, some cannot, etc.), and yes, all of them can be pushed more towards certain Ideals,” Baryshnikov explained. We only saw the warrior Aivor, who, Baryshnikov says, “is a great warrior and natural leader with middling magical abilities, but inexperienced in warfare. He’s able to recruit the largest amount of units in the shortest amount of time. One of his important starting non-spell skills, for example, increases all of his units’ XP for winning battles by 10%.” 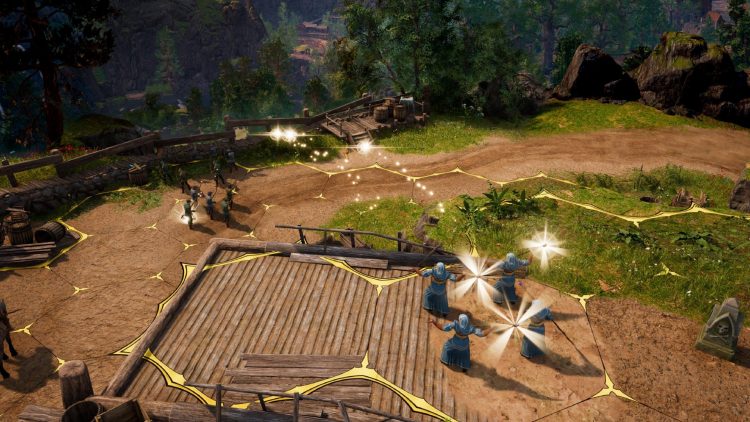 All of that said? Yeah, you’re still taking turns to battle it out over hexes.

All of which sounds absolutely bloody fantastic, as far as I’m concerned. I don’t have much in the way of worries about the tactical combat, as 1C has generally done a solid job with the King’s Bounty games it’s pushed out before. The Ideal system sounds… well, ideal, and the tweaks it brings to the traditional RPG formula are something I’m eager to experience.

Ideals do bring about one of my concerns, though, which is that if I’m going to care about questline resolutions and the evolution of my character then solid writing and voice acting are going to be essential. I’d like to care about this world and these characters as much as I care about cracking skulls on the battlefield. At this point, I have no idea how well this’ll work; most of the gameplay I saw was more concerned with the combat and the Ideals, which is fair enough. 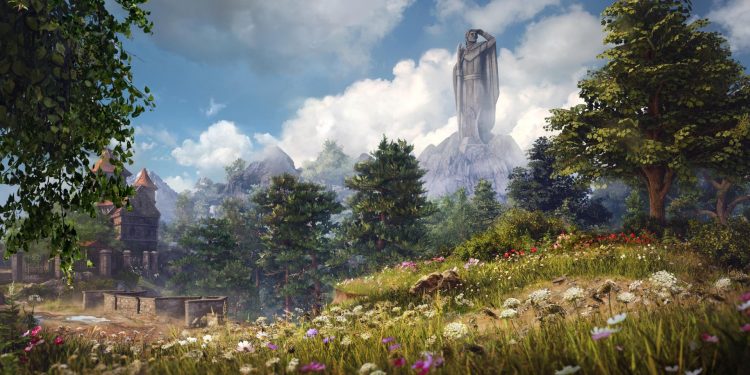 As a King’s Bounty veteran, one other possibility occurred to me: is it possible to fall into a death spiral where you run out of troops and gold and simply can’t progress? Baryshnikov reckons so, and explained as much when telling me about units.

“Everything can be purchased if you have enough gold and leadership, but yes, anyone can fall into a death spiral where you don’t have the gold to hire new troops,” he said. “So, oversee your spending before making the next move.”

In short, keep some backup saves handy, especially before big fights. But regardless of my concerns, I haven’t seen much that actually worries me. Planning ahead and taking fights carefully should be natural to veterans of this genre. 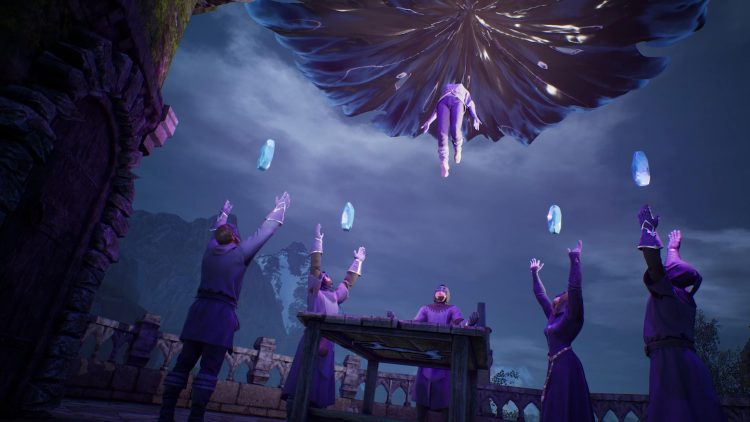 I’m not quite sure what’s going on here, but if it gets me more powerful units I’m all for it. Vampires, please.

And alright, fine. Maybe I am old. But at least that means I can hope some of the old tricks still work, because a nice big army full of undead that replenish their ranks as they slay their foes would give me quite a leg up.

King’s Bounty II is due out on August 24.

Fortnite will get a graphics upgrade for better explosions, shadows, and other effects