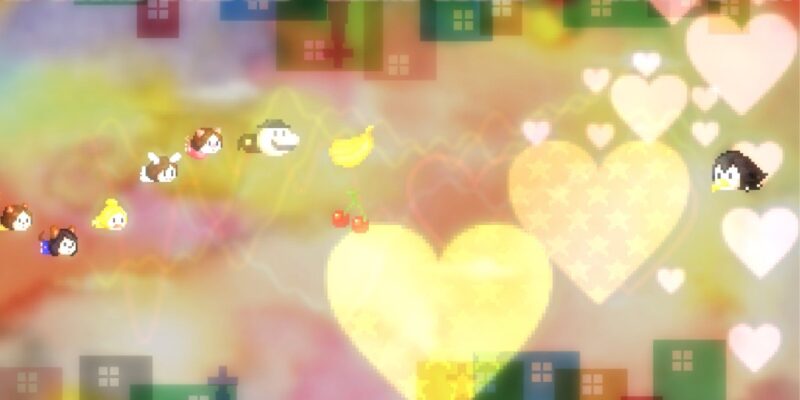 In the 1997 “anti-RPG” Moon: Remix RPG Adventure, players could go to the Technopolis area to play a minigame called “Xingiskan.” In this minigame, players had to guide a rocket toward a sphere by holding a button to go up, and letting it go to go down. A relatively simple concept, it posed quite a serious challenge for those who attempted it, especially since the physics of the rocket would change between rounds. It seems that Onion Games, the indie studio consisting of developers who made Moon, felt that the minigame had room for expansion, so they made Mon Amour, a game that reuses the basic gameplay premise but places it in a different context. Fans of Onion Games’ work, as well as those interested in the concept, can pick up Mon Amour today on Steam.

When watching a trailer for Mon Amour, viewers will immediately get a sense of the game’s quirky style. Instead of controlling a rocket, players guide a short, mustachioed fellow as he flies through colorful, hypnotic spaces. Players will have to steer the little guy out of trouble so that he can kiss one of a variety of bizarre characters. The advertising for Mon Amour suggests that “there’s a 99% chance you’ll instantly die as soon as you press start.” Judging by that description, players will need to work quite hard if they want to see the protagonist get the love he desires.

Experience love for only $9 USD

Onion Games excels at making bizarre experiences with oodles of charm, and this description definitely applies to Mon Amour. Players only have to pay $8.99 USD if they wish to play Mon Amour on Steam, so it wouldn’t take much to see if the game will appeal to them. Those that end up liking Mon Amour should check out some of Onion Games’ other titles on Steam, namely Black Bird and Dandy Dungeon.