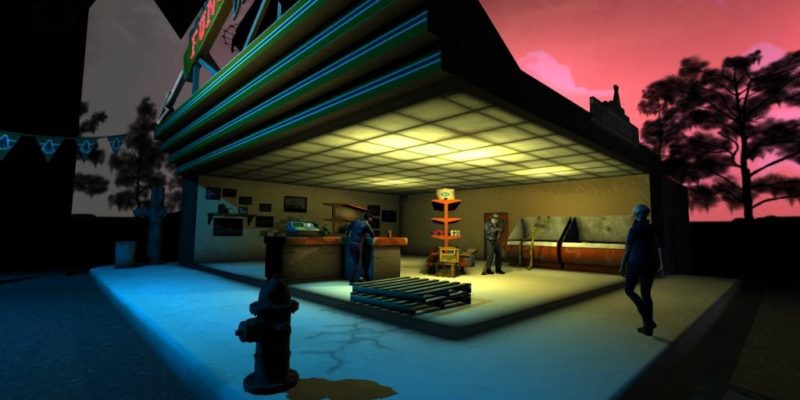 I’m secretly hoping for “Exit, pursued by bear” at some point ahead.

Thanks to the mega-acclaim around the first season of The Walking Dead, the ‘Telltale model’ has been adopted by others. By this I don’t just mean the episodic release structure, but the formula of using dialogue-and-decisions, rather than traditional puzzles, to drive what are still broadly referred to as adventure games.

That’s now a bit of an imprecise term, but nobody has really settled on a consistent way to acknowledge that The Wolf Among Us and The Book of Unwritten Tales 2, despite certain similarities, lie on different parts of the adventuring spectrum. Something along the lines of ‘interactive novel’ often pops up as a possibility.

For the moment, Telltale-like seems to work well enough. 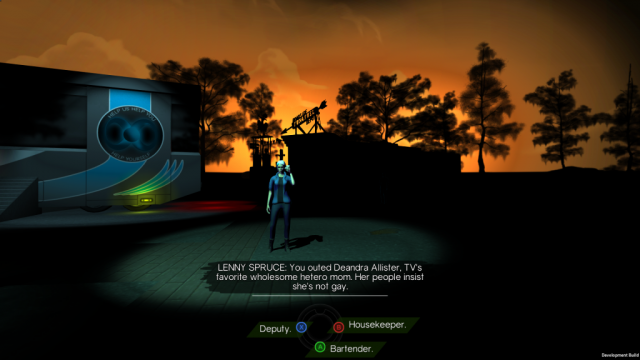 Dontnod’s Life is Strange is probably the highest profile of the current Telltale-like crop, but there are others in the indie scene trying to tell their own character-centered tales. The Detail is one such example, and Prologue Games’ Knee Deep will soon be another.

I’ve played through a half-hour preview build of this new series’ first episode (of three,) which means I don’t have a strong sense of where the plot is going, but can at least talk about some of the unusual mechanics and inventive staging.

Staging is the key word, really. Knee Deep presents itself as a theatrical production, complete with prop changes, ‘actors’ moving from scene to scene, and clever stylistic flourishes like roadside diner walls rolling back to reveal the building’s interior. It’s much more overt and literal than in, say, Kentucky Route Zero, where the scene transitions often have a theatrical aspect, but aren’t intended to denote an actual play. The 3D models are also a bit more ‘stock asset’ in look.

I’m not yet sure whether this choice of presentation will have any deeper, or meta-narrative meaning. It may simply be that the designers felt it would look cool. The approach is certainly novel, and (for better or worse) gives the player a sense of detachment from the proceedings. You’re watching, but also guiding, events that are even more explicitly fictional than usual.

I’m secretly hoping for “Exit, pursued by bear” at some point ahead.

Each episode of Knee Deep will have a different protagonist, with “cheeky blogger” (hey, that’s how they describe her) Romana Teague taking the lead in this first outing. I would argue that she can also be “hideous tabloid blogger” and “relentless truth crusader blogger” too, depending on how you have her act.

Teague is in the vicinity of Cypress Knee, a Florida town where one-time Hollywood star Tag Kern has just taken his own life. She has an editor on her case and an apparent history of screwing up the facts. Kern’s story might be the chance she needs to salvage some sort of career.

Knee Deep portrays this journalistic pressure by turning it into a periodic interlude where Teague has to file a new blog article based (however loosely) around the facts she’s uncovered in town. The articles are pre-written, but can be given a specific ‘spin’; edgy, tabloid or strictly dry and cautious. Sensationalism will drive up the blog traffic and please your editor, but does have dialogue consequences.

I’d written a particularly crass piece about Kern feeling isolated and unsupported when he died, which his friends (unsurprisingly) were not too impressed by. If the episode can keep up that level of reactivity throughout, there could well be some interesting repercussions; either from the incessant drive to pander to what people will click on, or on Romana’s career if she stays too low key. 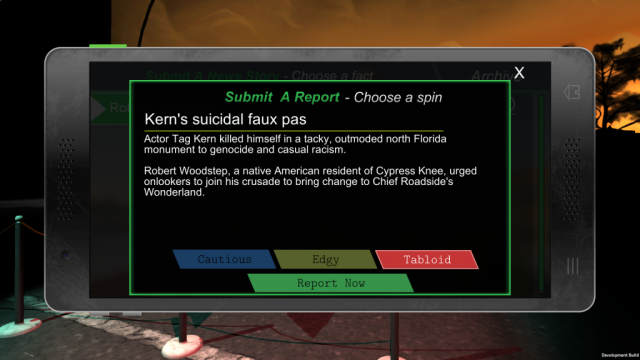 Now THAT’S how you bait the clicks. Suicide, outrage, celebrity; it has it all.

The journalistic interludes were a mechanic I’d not really seen before. In reductive terms they’re just another layer of abstracted dialogue for characters to react to, but these are always welcome in games like this based around branching paths and NPC interaction. The process of filtering and presenting information for your articles also allows the player some additional freedom of choice and agency.

That’s needed, because (so far at least) Knee Deep is extremely linear in its progression. Your main actor is bustled from scene-to-scene, with very little chance to walk or look around anything at your own pace. Without the blog-creation, my choices would basically have been limited to what I fancied saying and who to speak with first in a room. There are no puzzles, unless you count trying to discern which pieces of information are true.

This, of course, could all open up beyond the first half hour or so. But the stage-based presentation and the way the game conducts scene changes makes me suspect that it may not.

Dialogue choices are portrayed in the now semi-standard compass point ‘wheel’ which you can see in some of the images dotted throughout this piece. Like other games of this type, the summarised dialogue choices sometimes suffer from a slight lack of clarity, resulting in ‘you’ saying something slightly unexpected. 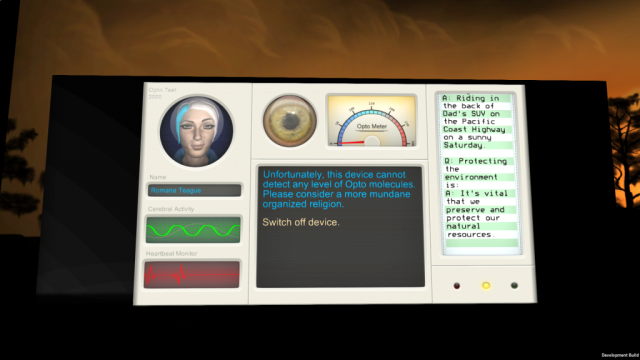 I was doing great until I mentioned that the environment is a pretty alright thing to preserve.

With most of the story still to unravel, there’s not a whole lot for me to go at there. I can say that it plays around with the timeline of events, hopping (I presume) forward to a point where Teague is being interviewed by police about her activities in town. There’s also a bizarre and not especially subtle Scientology stand-in called the Church of Us, who call their practitioners We-ists and give Romana a theta …err … ‘opto molecules’ test.

Success tends to be emulated, and Knee Deep takes clear structural inspiration from Telltale-like titles in its reactive dialogue and puzzle-less interactions. But it can’t be accused of being derivative in its presentation of events. Nor can I name any other games that have you penning scandalous blog entries about dead celebrities. That alone is enough to keep me interested.

Dying Light invites you to a Dev Tools closed beta

Cities: Skylines Zen Gardens dished out to everyone

By Robert Workman2 days ago
Previews

By Robert Workman2 days ago0
Previews

By Tim McDonald3 days ago0
Previews