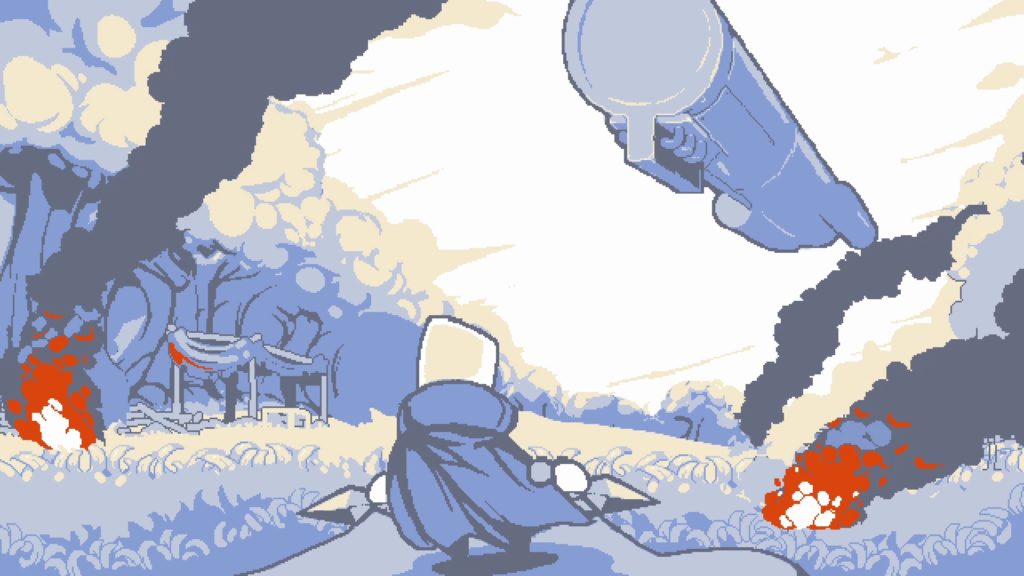 If anime has taught anyone anything (and it’s taught Kunai quite a few things), it’s that any and all absurd ideas deserve a shot. In Kunai, you play as the ninja, swordsman, munitions expert, rock climber, and chronic smiler, Tabby, as in a “tablet computer.” (Duh.) And not just any tablet computer, the chosen tablet — one imbued with the spirit of an ancient warrior. Who better to save humanity as it inches closer to extinction at the hands of the evil AI, Lemonkus? (Apparently not “Lemonkus” as in “lemon.”)

With humans facing complete annihilation, robots have taken to claiming the world for their own. Tabby and the robot crew over at the resistance have decided to take issue with this new world order, because any reason to shoot, slash, and ‘splode a few thousand bots can’t ever be bad. Kunai is an action-oriented Metroidvania that’s more about the juiced-up combat and frenetic action than the world-building. 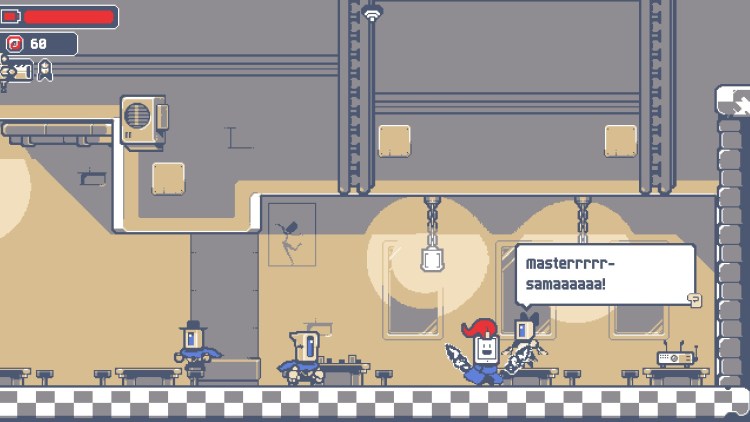 Straight out of suspended animation and into the fray, players start the game off slashing away with Tabby’s signature sword. Every successful strike is met with plenty of camera shake, slick visual effects, and crunchy audio feedback. Perhaps not to your liking is how Tabby is forced backwards after each hit, giving enemies space to counterattack. This feature is a constant in all of Tabby’s tools, urging you fight with a touch of grace and strategy.

Four-direction sword-swinging opens the door to additional tactics. For example, you can leverage the hit knockback to gain a vertical boost when striking a foe from above with a downward slash. Similar movement mechanics were robust enough to build entire games around, if The Messenger’s “cloudstepping” is any indication. I found this to be most useful during my romp through robot-infested Earth — almost too useful. Certain bosses were downright trivial in the face of my downward sword swipes. This is also true of many enemies when fought in isolation, but the one-trick pony approach falls apart in any other scenario. 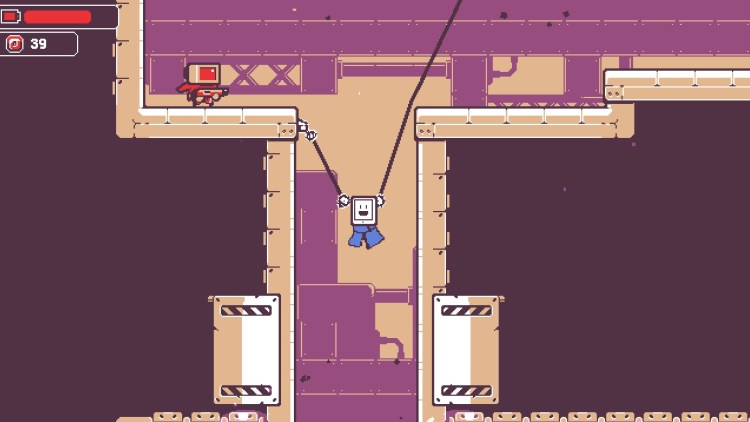 The core of Kunai’s movement lies in the titular tools themselves. Your two kunai, one left-facing and one right-facing, turn Tabby into the Spider-Man of cyber-ninjas, letting you hookshot your way around surfaces that allow it. Ropes attached to each kunai allow players to scale walls and swing across precarious gaps effortlessly. Both kunai are controlled individually, which presents a slight learning curve, especially when the remainder of Tabby’s gear fires based on the current direction facing instead. Though they have no effect on enemies, they’re crucial to gaining a positional advantage or to close the gap on a foe, Attack on Titan-style.

Both sword and kunai are invaluable components of your kit. The sword is reliable with no cooldowns and is the only weapon that restores health — called energy — per kill. Meanwhile, kunai are a necessity for traversal. The two have great synergy and are always in constant use; there’s simply nothing that can replace them.

The three additional tools have distinct uses, but all with a tiny fraction of the flexibility. The shuriken is necessary to activate switches, but its stunning capabilities are a hard sell over the raw damage of other tools. The SMGs helps Tabby clear a small number of large gaps, but they are woefully outclassed by the third tool, the rocket launcher. Even with their own unique charge abilities, unlockable via the upgrades store, I found myself sticking with the launcher unless an obstacle demanded I used something else. One could, for instance, toss a shuriken to stun a beefier enemy, then use that window to charge up a sword slash — but a rocket to the face is infinitely quicker. 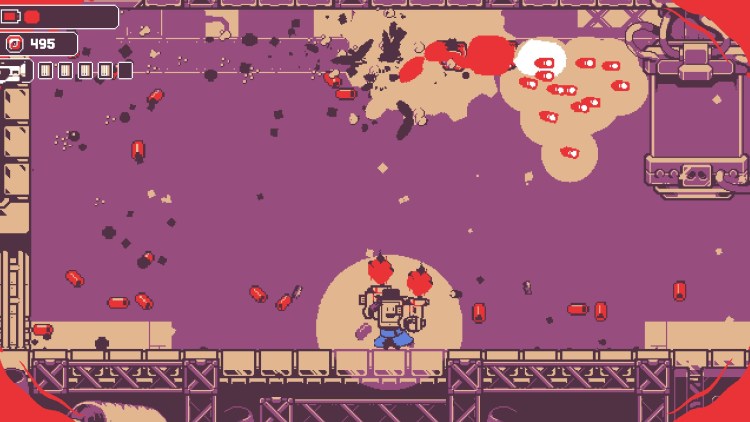 Two additional movement abilities, the double jump and dash, work their way into the adventure later on in the game. Interesting, yes, but both I have trouble justifying, as they draw attention away from the star of the show, the kunai, and towards less interesting, more gimmicky obstacles — the dash is the primary offender. In fact, I can’t recall actively using the kunai during the last leg of the game. And in the final fight, they saw no use at all. It seems rather unnecessary to continuously introduce new movement mechanics when the most satisfying and versatile of them all had plenty of gas left in the tank.

One versus one million

For a relatively short Metroidvania experience, landing somewhere in the ballpark of five to six hours for the main story, Kunai features an impressive selection of enemies and bosses. Each one demands special care in its dispatching; developing strategies for each enemy is half the fun of fighting them. Of course, none of that means anything after you get your hands on the rocket launcher. But up until that moment, the game presents a more-than-decent challenge, and even a few surprises after that.

You’ll face samurai robots, hulking titans, mine-laying pests — too many to list, really. Different areas feature different foes to test new skills and train you to focus in on key strategies. And as games go, area bosses put all those newly developed skills to the test. Kunai’s set of bosses is a mixed bag as far as challenge is concerned but consistently enjoyable to fight. The satisfaction of dodging and landing blows, on top of the sheer variety of different scenarios, highlights what’s so addicting about Kunai’s kinetic combat. 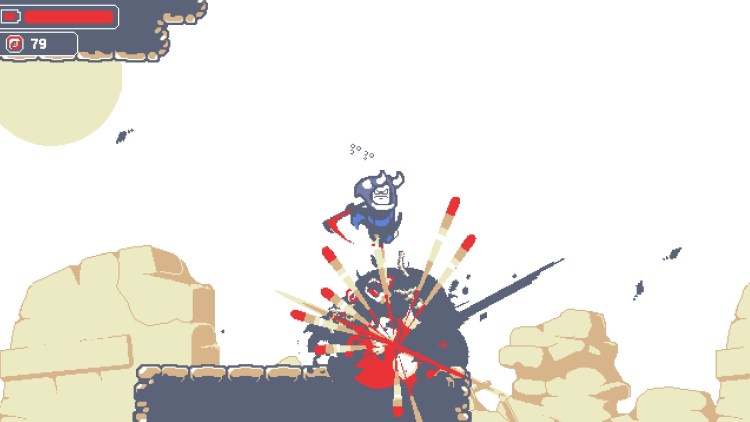 Can never have too many robot explosions.

The myriad environments of Kunai served as an appropriate backdrop for my robot genocide. Many are understated, with simple color palettes and geography. Others adopt unique aesthetics, filled to the brim with minute details and combat/traversal-oriented challenges. The most intricate of the bunch typically serve as camps — areas of calm where you have the luxury of taking in the sights. But it becomes incredibly difficult to appreciate the world when you’re whipping around slaying enemies at breakneck speeds. Learning the layout of the map was borderline impossible, not that I ever felt the need to.

But there is a benefit to keeping your awareness high. Secret areas, located behind various obstacles or fake walls, grant access to chests holding unique items. Items range from heart pieces to additional currency to hats. Lots and lots and lots of hats. And, as with all Metroidvanias, backtracking is a must whenever you snag yourself a fancy new tool. However, with no real incentive to return to old areas and no fast travel, the main story is never not your focus. For the avid collectors, hunting hats could easily double what would’ve been a five-hour trip. 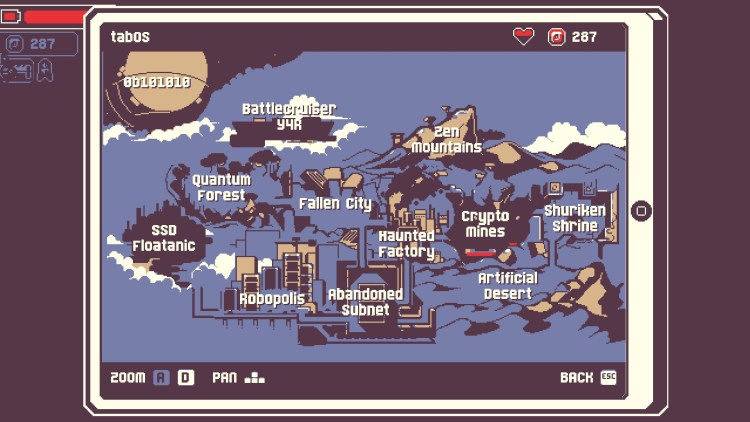 The newly desolate planet of Earth feels, for lack of a better word, dead. With combat being such an integral part of the experience — arguably the real meat of Kunai — there’s little reason to venture outside of where the resistance chief wants you. You want to be where the action is, and it’s definitely not out there.

The future’s not so bleak

Kunai is a bite-sized Metroidvania that’s well worth the pick-up for the fast, frenetic action alone. Its specialty is in delivering concentrated bursts of robot-killing adrenaline. The roped kunai offer an interesting take on 2D traversal and pair nicely with Tabby’s flashy swordplay. A handful of other toys and techniques, while not necessarily adding much in the way of depth, sprinkle on an extra layer of interplay. There’s plenty more to discover beyond the main story, but many will find it isn’t worth the effort.

Anyone interested in some good ol’ 2D action should check out Kunai on Steam.

Kunai is a bite-sized Metroidvania that’s well worth the pick-up for the fast, frenetic action alone. Once all the foes have been fought and the bosses have been bested, the Kunai content well has run empty.

The upcoming Fairy Tail game has been delayed to June