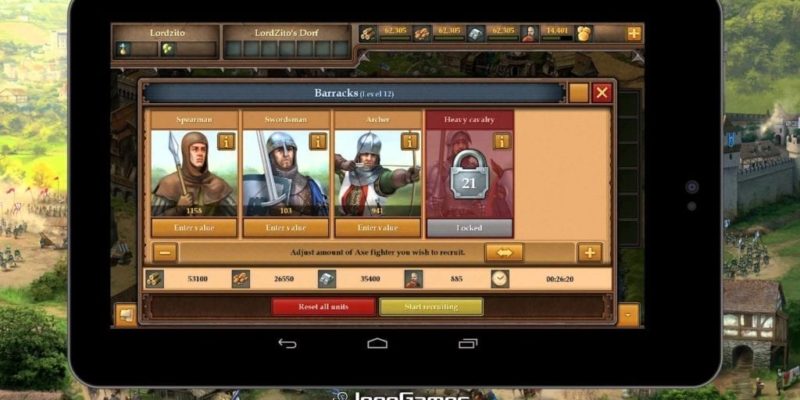 InnoGames releases information on the game’s graphics and style

InnoGames recently released additional information on the art and graphics of its online strategy game Tribal Wars 2. The game significantly overhauled the visual look of its predecessor, Tribal Wars, yet aimed at finding a balance between classical and modern visuals. The gorgeous buildings in the city overview were all hand-drawn first and took about one month each to be finished, as lead graphic artist Tobias Dunz explains in a new video on the game game’s visuals.

Aside from the attention to detail on troops and buildings, creating an updated yet familiar interface on all playable devices, including smartphones and tablets, was among the key tasks for the graphic team:

“We had to experiment and iterate a lot, before we found a way that was visually pleasing as well as functional,” says Dunz. “Very often we tried something and then realized, it wouldn’t work for mobile devices, and then we had to start over, to find a more appropriate solution.”

Dunz, who was also in charge of creating Forge of Empires’ visual style before, points out that Tribal Wars 2’s level of detail is unmatched by most modern browser games:

“Each building we have in Tribal Wars 2 is almost 4 times as detailed as anything we have done so far. And not only the user interface, but also the visuals of the game world are optimized for mobile and high-resolution devices,” the graphic artist explains. “Those adjustments will be especially noticeable on Apple’s Retina devices and comparable Android tablets.” adds Dunz.

In Tribal Wars 2, players find themselves as leader of a small village in the midst of a medieval world. Tasked with growing and expanding their empire within a war-torn landscape, they have to fight in order to survive. The MMO’s focus is real-time strategic battles with and against other players. Tribal Wars 2 will be released as cross-platform game for Android, iOS and all browsers. Therefore, players can set up one account for all platforms and play from whichever combination of devices they choose. Players can already pre-register for the game’s beta here.

Tribal Wars was developed as a hobby project in 2003 by the three founders of InnoGames, Hendrik Klindworth, Eike Klindworth and Michael Zillmer. Today, Tribal Wars has more than 50 million registered players and recently celebrated its tenth birthday with a big in-game event and a video saying thank you.