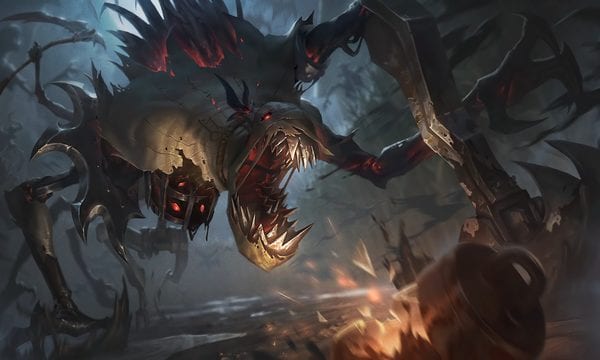 This is part two of our League of Legends Fiddlesticks guide for Season 10. Part 1 covered Fiddlesticks’ ability breakdowns and play style. This time, we’re covering recommended items and runes.

Playing Fiddlesticks in the jungle where he is at his strongest is highly recommended. To do so, you need the Runic Echoes enchantment on your jungle item as it is the only one that gives ability power. Stalker’s Blade would suit Fiddlesticks’ kit better as it slows and gives you movement speed with your Smite. This gives him better chase potential.

Zhonya’s active ability gives more survivability to Fiddlesticks in teamfights. The option to make yourself invulnerable for a short duration means giving more time to extend your ultimate. (The active does not cancel your ultimate.) The armor it gives is also beneficial. Jungle camps deal physical damage, giving you extra survivability when clearing. The majority of junglers in the game as well also deal physical damage and thus can be what helps you live through a counter jungle or invade.

Fiddlesticks is not a burst mage. His abilities are mainly for damage over time and give large amounts of survivability with his fear and healing. Liandry’s max health burn gives more damage to Fiddlesticks’ sustain damage, as well as proccing the double burn damage with his fear. The other passive ability of Liandry’s is to deal more damage the longer you are in combat with an enemy champion (up to 10%), which he can easily achieve with his kit.

Fiddlesticks does not have burst and struggles a bit in early-game scuffles. Electrocute gives you more damage to help you get to the later stages of the game. Dark Harvest requires stacks to eventually get stronger, Predator is very situation-based, and Hail of Blades is not good on Fiddlesticks at all. An argument could be made for Conqueror as well for the extra sustain, but Fiddlesticks is too squishy to fully stack Conqueror to be useful in teamfights.

Cheap Shot should be the next rune you take as Fiddlesticks rarely takes the other two for any reason. Taste of Blood is more of laning sustain, and as a jungler you will rarely need it. Sudden Impact only works of your ultimate and is not reliable at all. Cheap Shot gives your Reap (E) extra true damage if you get the slow off and thus is the must-take rune.

Eyeball Collection and Zombie Ward are about equal in terms of priority here. Eyeball Collection is a safe choice for any champion as it’s literally free damage. Zombie Ward on the other hand works very well with Fiddlesticks’ passive. The vision control it provides late-game is also a bonus, as I stated before that Fiddlesticks heavily relies on vision control to be effective late-game.

I recommend Inspiration due to the necessity of Zhonya’s Hourglass. Perfect Timing helps you achieve that position faster as Fiddlesticks needs to complete his jungle item first. Saving gold to reach that point faster is a must. Approach Velocity is also a decent rune as Fiddlesticks (outside his ultimate) does not have a gap closer. It allows him to chase much better with the amount of crowd control he has in his kit. Cosmic Insight is also a good rune, giving 5% extra cooldown reduction across all his abilities, summoner spells, and for Zhonya’s.

For your stats, slot the first two with bonus adaptive force, and depending on your match-up, go for magic resist or armor with the third.

Fiddlesticks is a well-balanced and vision-reliant champion. He has his strengths and weaknesses that balance each other out. His clear speeds take time to amp up, but ultimately he is one of the faster jungle-clearing champions. His vision control with his passive is massively underrated and can be the deciding factor of whether he wins the teamfight or not. He provides a lot of utility and crowd control to his team, so much so he can turn around teamfights with said crowd control.

In 1v1 situations though, he isn’t the strongest. He can’t gank that well pre-six, and he needs items to become a true threat to the enemy team. If his team and he don’t have vision control, his crowd control is very limited and he could potentially become a liability. When he falls behind it’s also very difficult to catch up to where he needs due to the fact that he is, in the end, a mid-game-to-late-game champion that needs his items and team to be with him.

Assassin’s Creed Valhalla lets you conquer Britain as a Viking