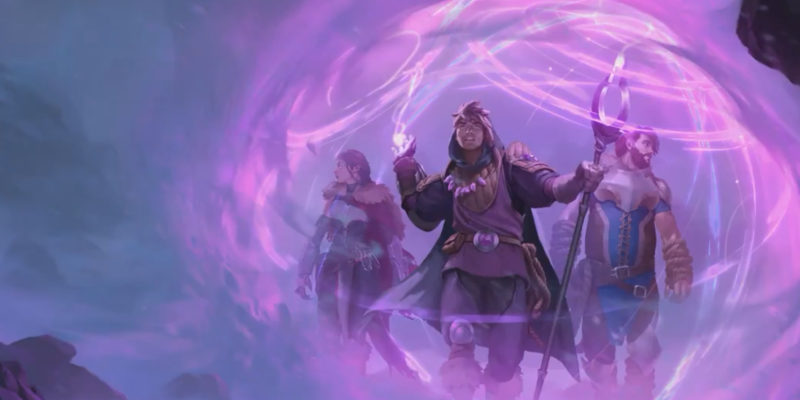 It is an exciting time for fans of Legends of Runeterra. Next week the game will see its next big expansion release, called the Call of the Mountain. With this new expansion comes a brand new region called Targon. A mystical, space-themed region. Over the past couple of days, we have seen some followers, a few spells, and the first new champion for the region, Taric.

Every day we will be getting new reveals until the launch of the expansion next week. After our preview post yesterday, the Legends of Runeterra Twitter account dropped some more previews, but not in a trailer this time. We saw Taric again, but we also saw a group of new cards supporting a new archetype, “gems.” We will go over each of these new gem cards to see what potential they might have in the upcoming meta.

First off, what is a gem? A gem is a 1 cost burst speed spell that can heal an ally by 1 and give it +1/+0. Gems cannot be played in combat or as a response to a spell. Which makes sense given the rest of the support we have seen so far. Taric copies spells cast on him to his supported allies, which can obviously only be done outside of combat, so it is keeping in theme with the strategies we have seen forming so far. 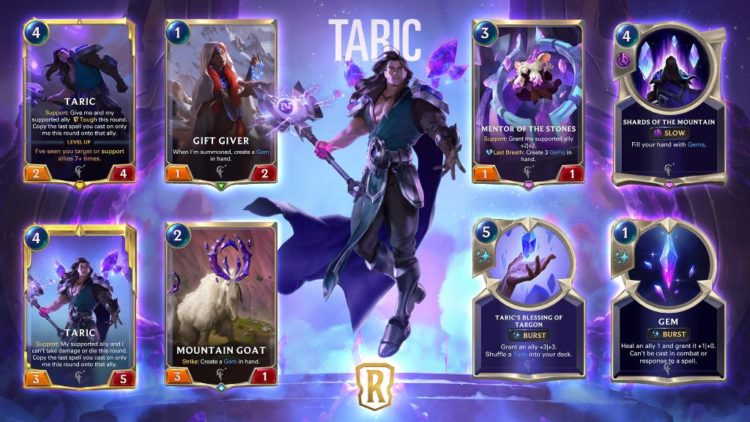 Gems are this champion’s best friend

Our first gem follower is called Gift Giver, a 1 drop with 1/2. When summoned she creates a gem in your hand. Pretty simple. The next follower is Mountain Goat. A 2 drop for 3/1 that creates a gem in hand on strike. Which will activate when Mountain Goat strikes another unit or the opponent’s nexus. The last gem based follower we see is Mentor of the Stones. A 3 drop for 1/1 that says “Support: Grant my supported ally +2/+2.” It also has a last breath ability that creates 3 gems in your hand when it dies. Obviously this card has great synergy with Taric, as well as other support based followers like Mountain Sojourners.

We also see a 4 drop slow speed spell called Shards of the Mountain. This card lets you fill your hand with gems. Legends of Runeterra has a maximum hand size of 10 cards. Meaning that this card could create potentially up to 10 gems in your hand. But remember that any extra cards added to your hand will disappear if you have no room. So make sure to remember that before playing this card.

The last spell we see is a 5 drop burst speed spell called Taric’s Blessing of Targon. The card grants an ally +3/+3 and lets you shuffle a Taric back into your deck. This is definitely Taric’s champion spell, as we saw the regular version of this card revealed yesterday. Gems are an interesting archetype, but having each gem costing 1 limits how effective they can potentially be. I wouldn’t be surprised to see a card, or even a champion, that makes gems cost 0 for a turn. That would certainly make cards like Shards of the Mountain much more powerful.

Small is big, up is down—with fae friends, it’s all twisted round! Find out who the fae ringleader is tomorrow. pic.twitter.com/Im2fHRlC4p

But we didn’t just get these new gem cards. Earlier today we had a second new archetype revealed in a tweet. This new archetype is based on the fae, which are essentially fairies. We got to see five new cards in this tweet that further the support based strategy of Targon. All five cards are followers, so expect to see some Fae spells either tomorrow or shortly after.

The first follower is Young Witch. A 2 drop 1/1 with the Elusive ability and a support ability that reads “Give my supported ally ‘Quick Attack’ and +1/+0 for this round.” A simple but very effective ability. Plus, giving the buff for the entire round as opposed to just during combat is always good. Next up is Flower Child, a 1 drop with 1/2 that says when it is supported it gets an additional +2/+0. Combined with cards like Mountain Sojourners and Taric, Flower Child can quickly grow into an absolute beast.

Next up is Fuzzy Caretaker, a 4 drop with 3/3. Its ability reads, “When I’m supported, give me +0/+3 this round.” It also has its own support ability of “Give my supported ally +3/+0 this round.” This is another fantastic support ability, and if Caretaker supports Flower Child that bonus now becomes +5/+0. Tasty Faefolk is the most vanilla of the fae cards revealed so far, a 3 drop with 4/2 and lifesteal. But with support buffs, a single strike from Tasty Faefolk could gain you upwards of 10 life in a single strike very easily. 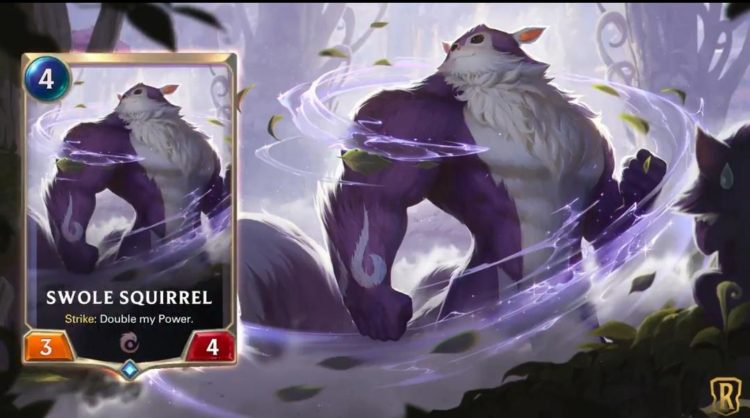 Do you even lift?

Last, but certainly not least, is the coolest card revealed so far, with possibly the best card name I have seen in years. Swole Squirrel is a 4 drop with 3/4 and an ability that reads “Strike: Double my Power.” What is great about this card is that the doubling doesn’t take place until Swole Squirrel actually attacks. So whatever buffs it gets from various support abilities is added to his base power and then doubled. Swole Squirrel can easily reach 20+ power without much effort at all. Ionia and Targon are going to be a very scary combination. After all, what are you going to do when that 20 power Swole Squirrel gets elusive with a Ghost spell? Nothing, that is what. Oh, and even better if it gets supported by a leveled up Taric so it can’t take damage or die. Yikes.

Tomorrow we will see the champion card for the Faes. If this new champion is going to overshadow Taric it is going to have to be something ridiculously powerful. The Targon region releases with the Call of the Mountain expansion in Legends of Runeterra next week, on August 26.