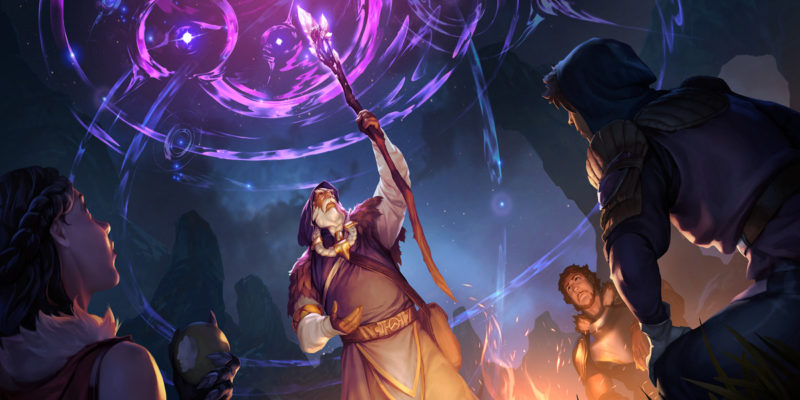 The Call of the Mountain expansion looks to be the biggest and boldest thing the game has seen yet. Each new reveal brings more cards, more champions, and more keywords to the game that will continue to liven up and expand its strategic elements. Yesterday we got a preview of another of these new keywords so let’s take a look at the new Legends of Runeterra Invoke cards coming to the game.

First off, what does Invoke do? When you play a card with the Invoke keyword, you get to pick a Celestial card from a random group of 3 to add to your hand. Celestial cards are 22 (as of now, more could be added later) special cards that you cannot obtain like normal cards. They cannot be added to your collection or to your deck, they can only be created in your hand via the Invoke keyword. Just like the lore implies, you are summoning these creatures and spells from the stars. You cannot choose which 3 you will get, as the selection will always be random, which adds a bit of balance to offset the inherent RNG involved. This will also help differentiate Invoke from something like Discover in Hearthstone by keeping the pool of possible cards to grab finite and knowable to both players.

The first Invoke card is Mountain Scryer, a 4 drop with 2/3 and the effect “Your Celestial cards cost 1 less. Allegiance: Invoke.” Some of the more powerful Celestial cards can cost from 10 to 15 mana, so making them cheaper is always a good thing. Plus, if the top card of your deck belongs to the Targon region, you can Invoke right away as well. This is a very good mid-game support card for Celestials that I would definitely recommend running three of.

Calling upon the stars for power

Spacy Sketcher is a 1 drop with 1/1 and the effect “Play: Discard a card to Invoke a Celestial card that costs 3 or less.” Not all the Celestial cards are big beatsticks; some are smaller creatures or even small, but very helpful, spells. Sketcher is a great way to ensure you can get some of that lower-level support to help you play the big boys later on. Plus, grabbing a 10 drop dragon for 1 mana would have been ridiculous.

Next up is Moondreamer, a 5 drop with 3/5 and the effect “Play: Invoke.” The higher cost Invoke cards have fewer restrictions and are the main way you will get a chance to summon the big, game-ending Celestial cards. Lastly, we have the only Invoke spell so far, Behold the Infinite. It is a simple, but effective, 2 drop Burst speed spell that just says “Invoke.” Since it doesn’t appear that Invoke will have much direct spell-based support, it is understandable that the one it does have just lets you Invoke at a low cost. 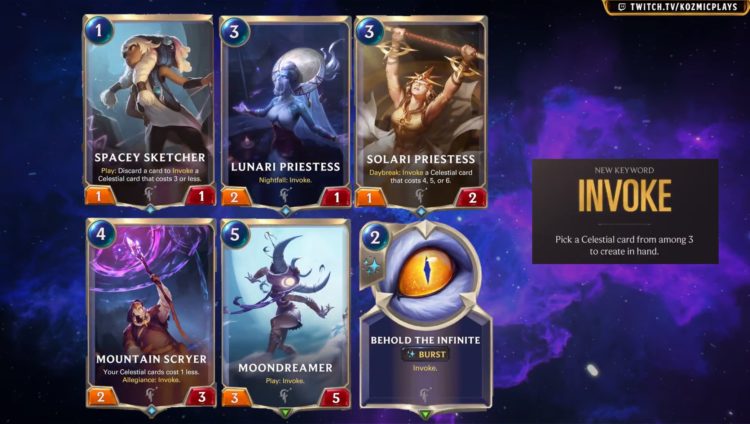 Thanks to @KozmicPlays on Twitter for the visual breakdown

A battle beyond the stars

Now you might be wondering, what are these Celestial cards, and are the new Legends of Runeterra Invoke cards even worth jumping through all the hoops to summon them? Well, the answer is yes, without a doubt. There are (as of now) 22 Celestial cards available, and today we will give you a peek at what the highest level Celestial cards can give you. Supernova is a 9 drop slow speed spell with an incredibly powerful ability. If you Behold a Celestial card, meaning one is on the field or in your hand, you can Obliterate 2 enemy units. This is an incredibly powerful 2-for-1 effect that can completely annihilate your opponent’s gameplan by killing two of their most important pieces, no questions asked.

Another big Celestial card is The Scourge. A 10 drop with 10/10 and Challenger, it is the most expensive Celestial unit. Its effect reads: “When I’m summoned, grant me +1/+0 for each Celestial card you played this game. Attack: Give other allies +2/+2 and ‘Overwhelm’ this round.” If your opponent has no answer for this card when it hits the board, it almost certainly means game over, as such an overwhelming onslaught can just devastate the opponent’s board. Keep in mind that The Scourge’s first ability counts for Celestial units and spells played.

The Call of the Mountain expansion releases this Wednesday, August 26 and you will be able to start using the new Legends of Runeterra Invoke and Celestial cards to your heart’s content. Are you sad that we only showed two Celestial cards today? Well, don’t worry, as later this week we will begin a new miniseries of articles going over five of the Celestial cards per day so you are ready to Invoke to the best of your abilities.

By Michael Feghali5 mins ago
Hardware