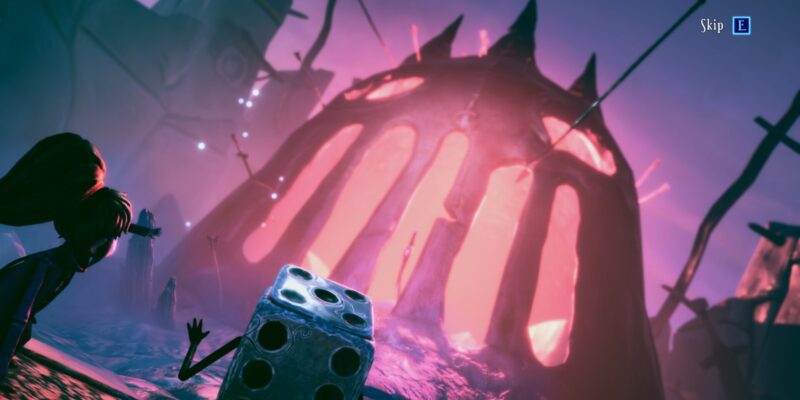 Let’s get something out of the way first. Yes, Lost in Random is published by EA, but it has nothing to do with Alice: Madness Returns. It looks like it, sure. And it has a similar atmosphere. But it’s a completely separate thing. With that out the way, I had a reasonably good time with the game, but it runs out of new permutations fairly early on, has a somewhat unimpressive narrative, and reuses NPC models so brazenly that I’m still perplexed. But it’s a good title that manages to justify its price tag. It could have been better, but, hey: Random rules!

Lost in Random has a perfunctory setup. A girl gets kidnapped by an evil so-and-so, so she has to be rescued. Specifically, Even and Odd are young sisters living in the town of Onecroft in the land of Random. On every child’s 12th birthday, the Queen’s nanny shows up and rolls a black dice. What number the kid rolls determines what town they live in for the rest of their life. Odd turns 12, rolls, and ends up in Sixtopia with the Queen, who has suspicious plans for her. The game follows Even as she blindly wanders around for a while looking for Odd.

The narrative lacks focus and doesn’t pay enough attention to its characters. I didn’t care much about anything that was going on, even if the dialogue is funny and well written. The voice acting from the entire cast is similarly fantastic. Hearing these talented actors deliver their lines is the best thing about the game. But the story just goes all over the place without any real direction. Even keeps ending up in each town until she makes it to Sixtopia because, reasons. Strangely, Even herself is almost never voiced outside of cutscenes while everyone else is. This was a waste, as I didn’t get a good feel for her as a character and it would have been great to hear her voice actor perform her lines here, as she does a great job otherwise.

It’s also jarring to see the same exact NPC models over and over again. They’re so unique that they seem like they need to be individuals, but you’ll see them over and over again with different names and voices. There’s no lip syncing outside of cutscenes, either, which looks really bad as enemies just flap their mouths while voices play. Lost in Random also leans a little too hard into The Nightmare Before Christmas‘ bag of tricks, with some sections (especially Two-town, where people have two personalities) coming off as too direct. Yes, there’s a mayor with two personalities. Yes, one of them looks a whole lot like Oogie-Boogie. 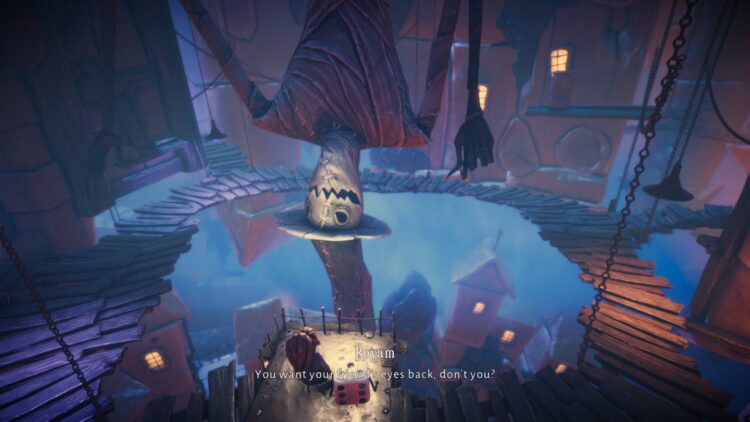 Feet on the ground

I had only taken a brief look at a trailer before playing Lost in Random, so I went in almost completely blind. I was quite disappointed to see that there wasn’t a jump button once I started. There isn’t as much to the game as I’d hoped as a result, and some platforming would have mixed well with the rest of the game. Plus, it would have helped exploration. The game’s structure, as stated previously, takes Even to each of Random’s six towns. Once there, she follows the main quest, along with some side quests. There’s exploration and the world looks good, even if it feels a little cramped in spots. Art direction-wise, though, the game’s color palette leans too heavily on blues and reds. The game does look impressive overall, though, and it runs like an absolute dream.

Side quests reward Even with new cards and currency that she can use to purchase cards. Aaaaand that’s it. When Even’s not exploring or engaging in half-silent conversations, she’s in combat. The fighting is quite good in Lost in Random, even if the game is too easy most of the time. This is an action game, but it uses a deck of cards to decide what your options are. You can have 15 cards in your deck at once, and by default, Even can’t do anything other than shoot things with her slingshot. The robots she fights form crystal growths on their bodies. When she shoots these, they drop blue cubes that give her energy.

Once she’s got enough energy, she draws a card from her deck. After a certain number of cards have been drawn, no more can be drawn until after you use all that energy. This is where you roll Dicey, Even’s partner. Dicey, as you’ve likely guessed by now, is a living dice. At first it can only roll a one or a two, but it gets upgraded as the story progresses, allowing higher numbers. Each card has a number on it and playing that card will require you to have rolled a high enough number. 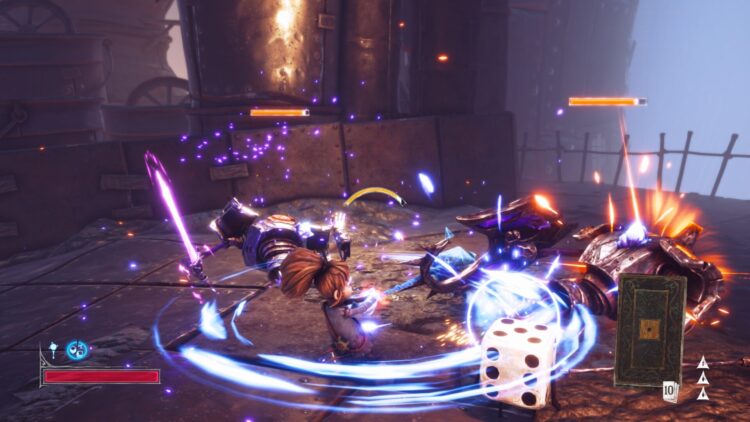 You’ll gain new cards from quests, plus you can purchase them from Mannie Dex, a weird man that lives in a cabinet. The issue is that, partway through the game, new cards stop showing up. It makes things feel pretty samey after a while. Complicating matters are the cards themselves. They come in a few varieties. For instance, playing a mace or bow card will give Even an ace or a bow with a certain amount of durability or shots. There are also cards that heal Even, ones that allow you to drop bombs, set up traps, give yourself extra numbers to use cards, and more.

But many of the cards used to damage your enemies just can’t hold a candle to the weapon cards. I loaded my deck with maces and easily decimated everything Lost in Random threw at me. Fights mostly boil down to “shoot crystals, gain energy, dodge, repeat ’til you have weapon cards, use weapons, repeat,” until you win. Even can also dodge, which is invaluable. Once again, the combat feels good, at least, with the mace and spear weapons being quite fun to use.

Not all encounters are purely about hitting things, though. Some are little board games with their own rules, which was pretty awesome. The number you roll in these also dictates how many spaces your piece moves, but these are usually just about getting your piece to the end. They’re still a fun change, even if they strangely dry up towards the end of Lost in Random. There are boss battles too, but they’re also mostly too easy for their own good. The end of the game sees Even fighting three boss battles in a row, and they’re all so easy and simple that I felt a little underwhelmed. 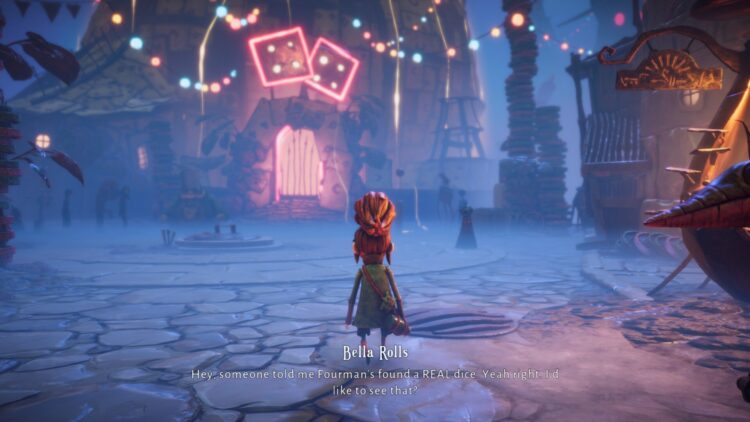 Then I reached the ending, which wrapped up too quickly and completely lacked an epilogue, unless I missed something. It ends abruptly and uses one of my least favorite tropes to close out the villain’s lackluster arc. Once you beat the game, uh, that’s it. If you missed side quests or want to fight something else, well, too bad, you’ll have to play the game again.

I like Lost in Random overall, but I feel like it should have been better. While the dialogue and voices are top-tier and the combat is agreeable, something feels like it was, well, lost. Maybe they’ll add some sort of combat challenges down the line. Some more challenging content would certainly be nice, to incentivize booting up Lost in Random in the future.

Charming and often fun, Lost in Random has less going on than I would have liked, even if I had a good time overall.

Tales of Arise — Quick tips to get you started