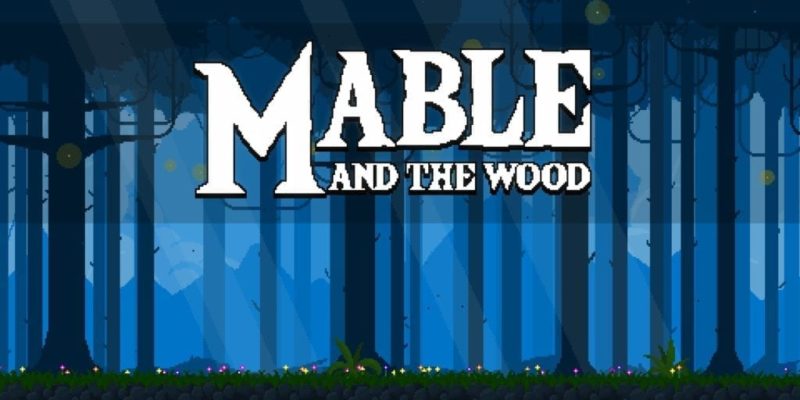 Mable & The Wood is what happens when your paladin rolls a 20 in magic and zero for everything else. But she still decides to go at it with a sword — bless her heart. Indeed, Mable isn’t quite the great hero of prophecy the woodland druids who summoned her were expecting. She appears ensuing a chant, “Arise! Arise!” What appeared before the druids was a small child with fiery red hair, wielding a sword clearly too heavy for her. It’s not quite what they expected. But when your home is being ravaged by fearsome monsters, I suppose you make do with what you have.

But however shocked the druids may have been about Mable, the world which surrounds them and the supposed hero of legend holds few surprises. Mable & The Wood is a pixelated side-scrolling game in the same vein of a Metroidvania. It’s fairly linear in the section I experienced, with few opportunities to explore beyond the path (there is a secret area you can go once you find a key however). You move forward, hopping over platforms and solving simple progression puzzles. Some sections are blocked off, requiring a particular upgrade to bypass — as Metroidvanias often do.

The world itself looks nice enough, with the shifting blue and green hues of the forest; followed by purple, misty caves; windy, snow-capped mountains; and a ramshackle hamlet. But if you’ve played any game of its ilk, Mable & The Wood doesn’t stray far from convention — at least not in the short preview I played. 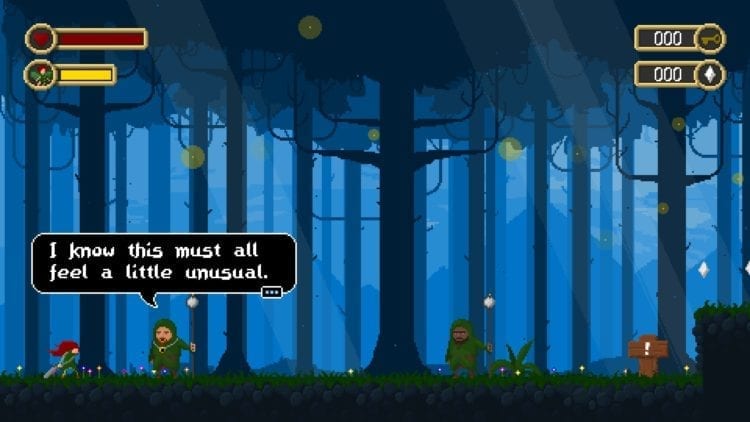 The forest druids come to terms with their disappointment.

Instead, what should set the game apart is its unique approach to combat. As mentioned, the sword Mable is set on using is obviously too heavy. But Mable isn’t one to rely on rippling muscles to tackle the dangers ahead. She’s a magical being, and it’s through magic she deals with her quarry. A shapeshifter, Mable can take the form of one of several creatures at a time (I believe there are eight in total). At first, she can only morph into a fairy, allowing her to fly to higher ledges or over pitfalls. Transforming causes her to drop her sword on the ground, and a white, dotted line connects her with the weapon. Bisecting an enemy with the line causes it to turn red. When you return to human form, the sword whips through the air, killing your foe.

The combat is certainly unusual, and it took a while to get the hang of the finer points. However, I ended up enjoying it very much. At first, I changed to the fairy form to bypass or dodge enemies, but in doing so I was often stuck with a flash of inspiration. Just the act of maneuvering around some of the more mobile enemies, such as bats, sometimes awards you with that perfect angle. And once you get the timing right, flinging your sword through enemy after enemy like a floating ballerina of death is a lot of fun. Magic is finite, however. Once you change, a small wheel appears and begins draining down until you run out of magic and are unceremoniously swapped back into human form. This puts a little more urgency into every fight, which ups the danger and excitement. 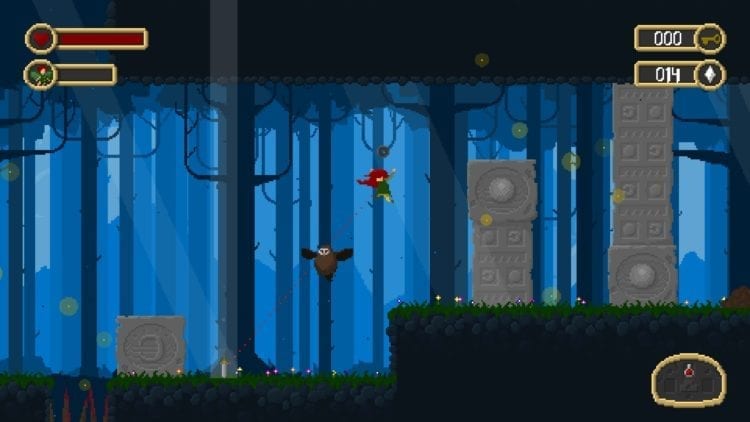 Use the red, dotted line to set up the killing blow.

However, while the combat is enjoyable, the rest of what I experienced didn’t quite match up. Mable moves painfully slow. Of course, it’s really to drive home the point of how cumbersome it is for a child to drag a heavy sword. But hell, you really do move slow in this game. I ended up transforming into one of Mable’s more nimble forms just to progress faster. There may be something said about how hurried I can be when I play a game, but the pacing of Mable & The Wood made me impatient. The game is also not very challenging. While hopping around enemies during combat is a treat, most creatures go down with one blow. And some, like the owls, just stay in place and take it.

There are townsfolk to talk to and puzzles to solve, but neither activity felt all that enriching. The random assortment of personalities lacks some, well, personality. A motley crew of characters populate the world, and are often light-hearted and amusing — if not a little sullen at times. However, their attempts at humor often fall flat, and conversations rarely go anywhere important, taking up valuable owl-slaying time. The puzzles in the demo consisted of pressing down weights to open doors or reach higher platforms. But they were about as tricky as putting a square peg in a square hole. 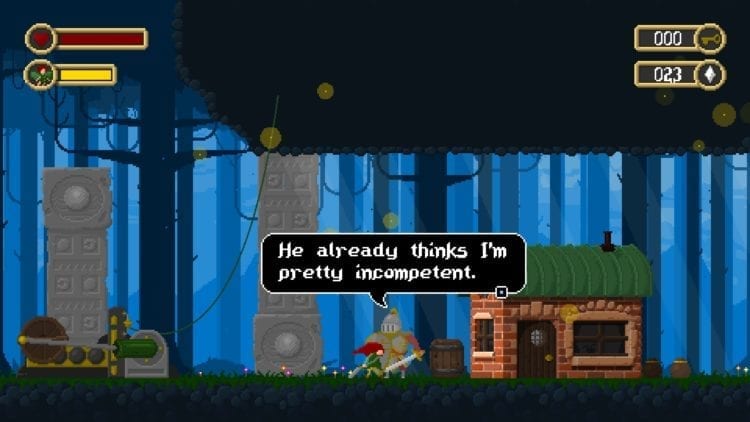 “Yeah, uh-huh, okay. And what’s that got to do with killing owls?”

Even the demo’s one boss fight against the enormous Spider Queen was a snooze. Her attacks, clearly announced, consisted of hopping on top of you. She was painfully simple to dodge and, once you learned how to attack her softer underbelly, took fewer than eight hits before going down.

At least the spider power she grants Mable is great. Transforming into a spider, you to fling the sword into walls and ceilings. A thin, silk thread attaching you to the weapon allows you to swing over chasms and up sheer walls. It’s enjoyable swinging through caves and steep, winding passages like Spider-Girl. I just wish the power felt more like a reward truly earned, rather than reluctantly granted. Also, hurling the sword does destroy certain red vines, so there’s your necessary upgrade.

Dying in the game warps you back to a progress point. You lose all of your in-game currency, represented as diamonds. But, in Soulsborne fashion, you can reclaim your lost loot by shattering a frozen effigy of yourself near the spot of your demise. Though I wasn’t able to test it, I believe you get more than one chance to reclaim the goods. Diamonds can be spent at random shops where you can purchase items such as health potions. I really didn’t need them during the demo, however. You have a health bar, and you don’t die in one hit. Additionally, the game — or at least, this current build — doesn’t provide enough challenge to warrant stocking up on health boosts. 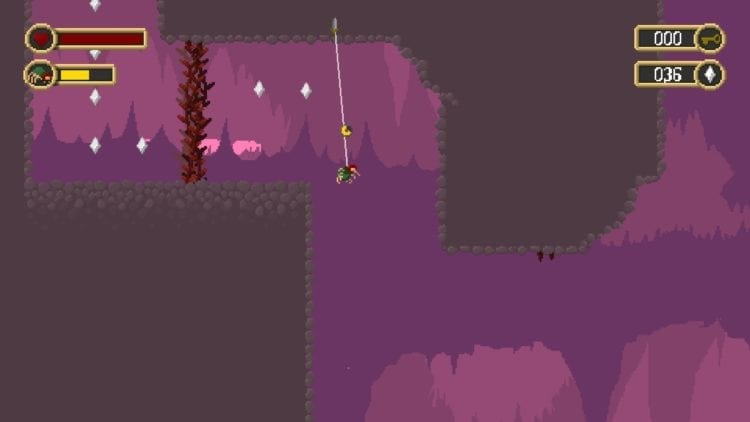 Coming soon to a forest near you

Naturally, I can’t pass final judgment on a 20-minute demo. It was basically just its tutorial mode, if we’re being honest. I imagine there is still a lot more in the unexplored reaches of Mable & The Wood. While the majority of the experience certainly hasn’t lit my hair on fire, the combat and promise of more forms to change into have lit my interest. The developer has also revealed that you can skip bosses, if you like. And the final build will include multiple endings. With all this in mind, ultimately I do hope Mable & The Wood has what it takes to be a cut above the rest. We’ll know once the game fully releases sometime later this summer.

By Tim McDonald5 days ago
Interviews