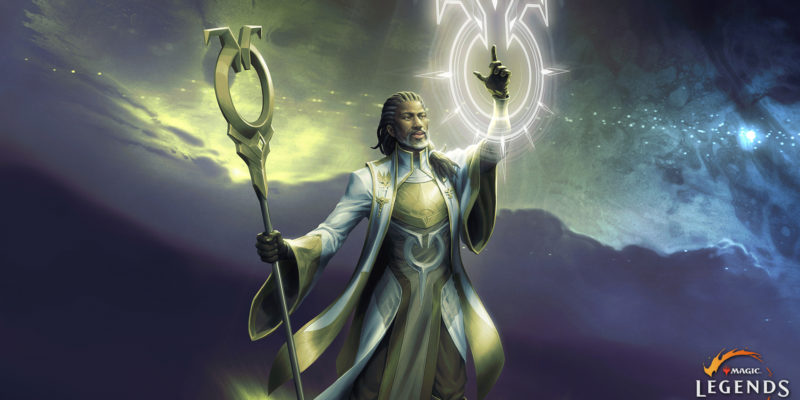 Magic: Legends originally opted for a unique character progression system that involved spells and artifacts of different levels and rarities. However, it turns out that action-RPG fans really want to collect loot which they can equip to their characters. The Magic: Legends team has pivoted in response to this and developed a more robust equipment system.

The new system will be much more familiar to players who enjoy games like Diablo and Torchlight. You head off into the unknown, slay enemies, and complete quests. In return, you are rewarded with loot. The new Magic: Legends equipment system is deeper than originally planned, but Cryptic Studios insists it isn’t overbearing.

The gear you discover in the new Magic: Legends equipment system will come in four rarities – Common, Uncommon, Rare, and Mythic Rare. These are the same tiers you will find in the Magic The Gathering trading card game. You can check out an overview of the system in the video below.

Your character screen will have six slots for you to put equipment into. There are slots for your head, body, arms, feet, and two accessories. The loot you find on your travels will boost your Planeswalker’s combat ability and survivability in numerous ways. Each piece of gear will have one Core Mod and up to two Adaptive Mods. Core Mods cannot be changed, but Adaptive Mods can be swapped out. 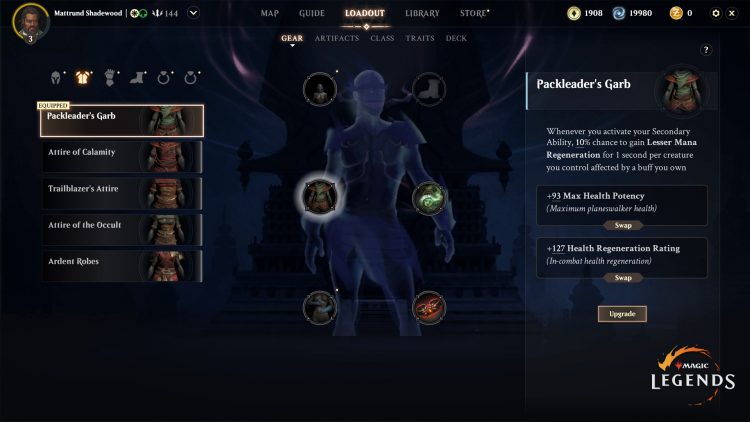 Mods will do things like increase damage potency, reduce mana color-specific damage, or give you a passive soul-steal that consumes the life force of enemies you kill. Those are just a few examples of how gear will empower you. Plus, discovering more of the same piece of gear can unlock new Adaptive Mods and earn upgrade material to increase the potency of your existing Mods.

The final thing you need to know about equipment in Magic: Legends is that each new piece you find will unlock new cosmetic options for your character. Once unlocked, it appears you can change your appearance at will by visiting the NPC known as the Tailor. 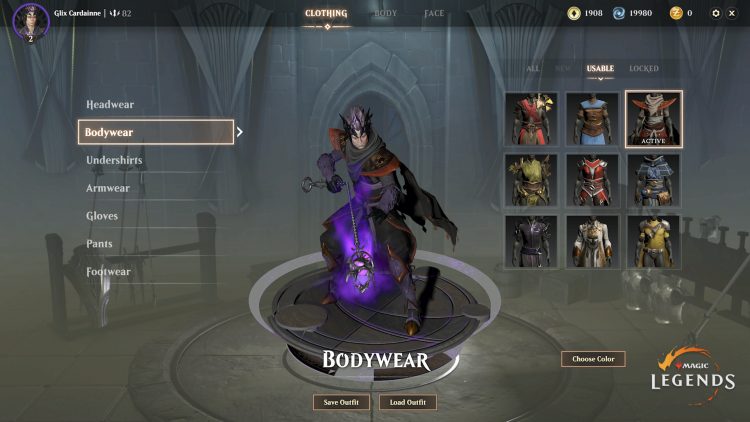 You’ll be able to find the Tailor in the hub area of each region. They will let you try on all the cosmetics you’ve unlocked, as well as try out different colors for each piece. At the Tailor, you will be able to edit your Planeswalker’s headgear, bodywear, undershirt, arm wear, gloves, pants, and footwear. Since this is a world of magic, the Tailor will also be able to adjust your character’s body, face, skin color, hairstyle, and a bunch more.

If you’d like to embody a spell-slinging Planeswalker, then don’t miss the Magic: Legends open beta starting on March 23. If you haven’t signed up yet, you can do so here.