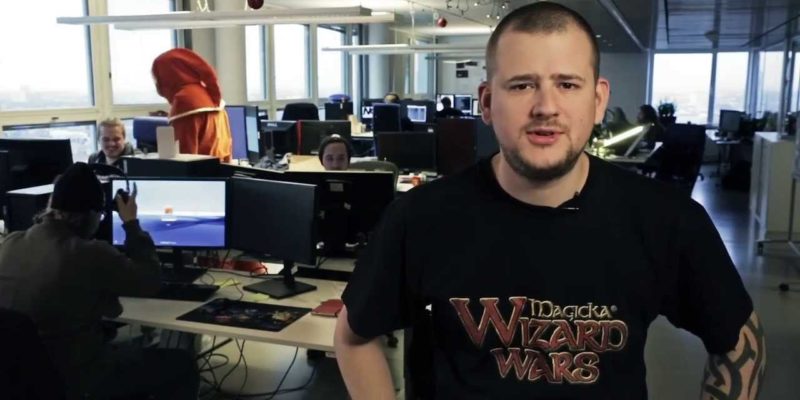 On the third day of Christmas my true love gave to me a massive electric shock, which was particularly nasty because she’d doused me in water beforehand so it did even more damage*. If you and your true love have been murdering each other repeatedly in Magicka: Wizard Wars, you’ll be pleased to hear that a large winter-themed update is up. If you haven’t been doing that, then you may be interested in a behind-the-scenes look at Paradox North via a newly-released video.

So, that update. First and probably most important is the addition of the Magicks screen, which adds a degree of progression to Wizard Wars. Gameplay gets you crystals made out of pure elements, and these crystals can be used to unlock powerful new Magicks – the powerful super-spells that you’ll only be able to access a few times per battle. An example given is the Mighty Hail spell, which bombards a massive area with ice and freezes anyone caught up in it. Which probably includes your teammates, friends, and/or true love.

Other than the Magicks screen there are holiday-themed Imps, snowy backgrounds, and the ability to equip snowballs as a weapon. And, yes, snowballs freeze people. Because that’s how snowballs work.

If you haven’t bought into Wizard Wars‘ Early Access program, then you may nonetheless be interested in a behind-the-scenes look at Paradox North. There’s a bit of a studio tour, some looks at the gameplay, and a fair few interviews with key staff members on the game. There are also regular appearances from the Magicka wizards, because this is a Paradox video. Have a gander at it below.

* It’s okay. On the fourth day of Christmas I got my own back by dropping a meteor on my true love’s face.

AaaAAAaaa!! for the Humble Bundle