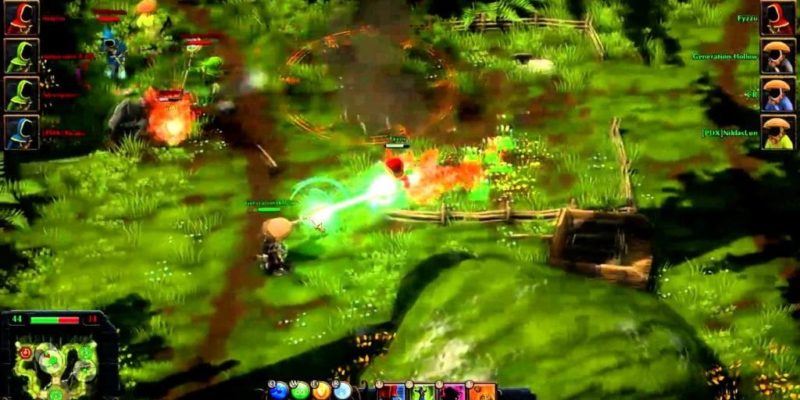 I died, obviously. Magicka was a game all about killing yourself and your friends, usually by accident or unthinking stupidity, and putting a slightly reworked version of the detailed casting system into a competitive multiplayer game is a surefire recipe for rapid, hilarious, unexpected death.

I mean, there was the time someone soaked me in water just as I charged up a lightning spell, so that made me explode into cooked red chunks. There was the time one of my allies dropped a meteor on my head because I was standing too close to a group of enemies. There was the time I hurled a fireball (or something like it) at an enemy who was too close, and the explosion finished me off. Being that the majority of us were new to the game, stupid and silly deaths were the rule rather than the exception. It was glorious.

Magicka was never really intended to be a PvP game. According to lead designer David Nisshagen, while there was a small cadre of players that thoroughly enjoyed the patched-in PvP combat, there were just so many spell combinations and possibilities that it was basically impossible to balance. It was a stopgap.

Magicka: Wizard Wars, on the other hand, is designed from the ground-up for PvP. It functions in broadly the same way – you are a tiny robed chap with “control” over various magical elements and the life expectancy of a suicidal mayfly, and you cast spells by combining those elements together and then unleashing them, either centred on yourself or in a directed blast. Combine Fire and Arcane to unleash a beam of flaming doom, or Fire and Earth to lob a huge flaming ball of rock at someone. Use Life and Shield to spawn a load of healing mines. Whatever.

The main difference here is that you can only combine a maximum of three elements together, which limits the number of available spells. Again, this is intentional: Nisshagen stated that the idea was to give you fewer spells to cast, but to make all of them useful in certain circumstances.

Spell effects have had a nice little upgrade from Magicka, making most of them look like the fevered imagination of a pyrotechnic specialist.

The other difference, I suppose, is in the way battles play out. In the only map/game mode currently available, your team of four is battling another team of four for control over three spawn points. Each team has a limited number of spawn tokens (as you’d expect, one is used up every time somebody respawns) and so you can either win by killing the enemy enough times that they run out of tokens, or by holding all of the spawn points and killing them all off so that they have no-one left and nowhere to spawn. In terms of creating directed chaos – setting up small flashpoints for explosive and unpredictable magical battles – it works wonders.

What it doesn’t illustrate, though, is both how quickly you learn new things, and the extent to which mind games are involved. When I played with other journos in this hands-on session, for instance, we were mostly new and thus focused on a lot of the old standby spells and combinations; let loose a torrent of water to douse the enemy, and then switch to Lightning, because electricity does extra damage to wet enemies.

All well and good. Except that, of course, I wasn’t the only one trying this. If I got soaked – and, quite honestly, my first match was like wandering around a waterpark – then attempting to cast Lightning would cause it to arc through me, instead. As such, I quickly learned to queue up a Fire element, cast it on myself to dry off (or singe myself for a little damage, if I hadn’t yet been made moist) and then use Lightning. But… well, why not just use Water and Shield elements to make myself immune to soaking? Or – no, better idea. I’ll set up a load of electrical mines around the perimeter of the spawn point I’m defending, soak anybody approaching, and then cast Haste to run behind the Lightning mines. Or! Better still, I can set up the Lightning mines, and then use water like a huge cannon and knock them into the mines. Unless they’re immune to Lightning, in which case… hm. Or maybe they’ll shield themselves with a rock wall and heal up as soon as you do that, leaving you scratching impotently at the outside. Or maybe they’ll fire beams at you, requiring quick thinking and deft fingers to summon a shield that reflects the beam. Or maybe…

And so it goes on: you figure out new combinations and new possibilities, and use them to destroy your opponents. And your teammates. Often by accident. You start to see habits that your opponents are employing, and you develop counter-tactics, just as they do to you. You adapt, and so do they. You split up, and then realise that – alone – you don’t really have the firepower to take on a group of enemies. You stick together, and then realise that “friendly fire” is a rule rather than an exception, and an over-enthustiastic ally kills the other three of you. Like I said: mind games. Tactics. Learning. Thought.

You’ve also got Magicks, which are powerful spells that charge up as you kill enemies. These work like the superbar from fighting games, with each requiring a different amount – Haste, speeding you up drastically, only takes up a little of the bar. Calling down a meteor shower? That requires the bar to be fully maxed, so you’d better be certain you’ll get a few kills off it.

Summoning Death is actually only the THIRD of the four Magicks.

There is an underlying structure behind the otherwise random matches. You can already form parties with your friends and march into battle as a group. Matches gives you experience, which… okay, no, I have no idea what that does. There’s also a customisation system, letting you change the staff, weapon, and robes of your hero, which either changes his basic melee attack or gives him bonuses to particular elements. You can spec as a healer, or a lightning mage, or a fire mage, if you fancy.

What Magicka: Wizard Wars is, right now, is untapped potential. Nisshagen made it clear that the game is currently in very early stages, and most of the balancing, extra maps, and extra game modes will originate from the players, their desires, and what they uncover. The core is there, and it works fine (I can happily report to having no problems with the multiplayer, although who knows if that’ll last when things open up to the public later today). It’s just waiting to be fleshed out.

Magicka: Wizard Wars is now in an Early Access alpha on Steam, and is available for £8.99.

By Steven Wong13 hours ago
News