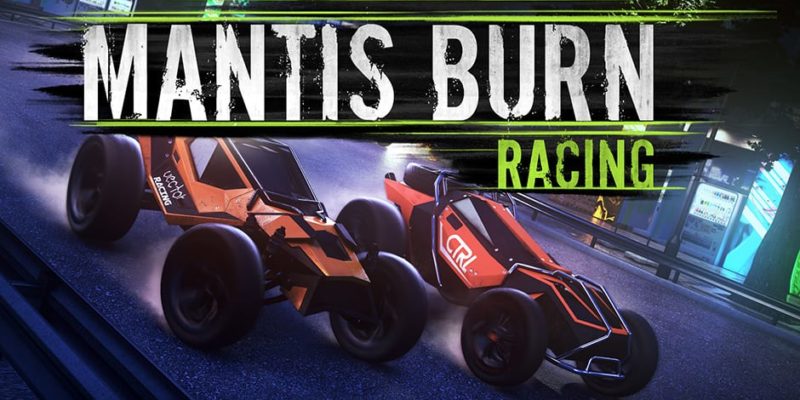 Mantis Burn Racing is the new top-down racer from VooFoo studios, aimed squarely at players who like their driving games to be a little less realistic.

The game has been designed to challenge top-down racing fans in the single player game mode, or as Mantis Burn Racing calls it, Career Mode. In single player, the game takes you on a journey from Rookie seasons right through Veteran. There are three seasons for the Rookie and Pro sections and a single for Veteran. 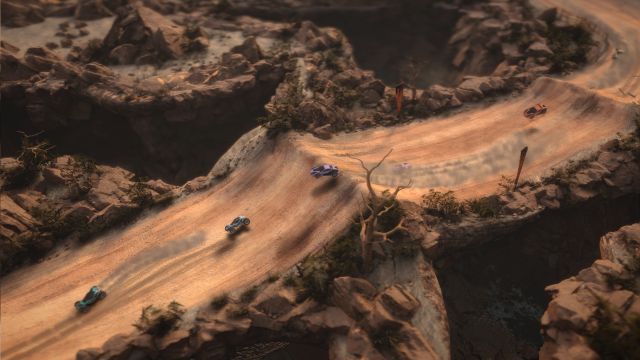 Players have to progress through each Season before moving on, and at the same time level up to unlock car enhancements, new vehicles, and earn currency to upgrade cars. To get to the next stages, Car points are collected which allow you to progress.

The progression system is straightforward enough, but players need to actually win races to accumulate points and advance their careers. Each season comes with a variety of different race types, and it’s these that keeps the game reasonably interesting. Racing around tracks is all well and good but it can get dull unless the rules are changed every once in a while. For some races you might need to make sure you cross the line first to avoid elimination, others might simply challenge you to beat your best time against a ghost car. It’s these challenges that will keep you grabbing the controller. 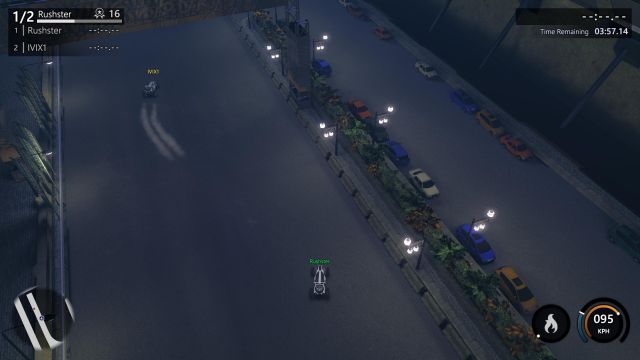 Speaking of controllers, I have been using a Steam controller and there’s been no problem whatsoever with functionality. Valve’s controller worked right from the off, so well done to VooFoo for making sure the support is there. That said, there are essentially only four areas of control to get right: accelerate, breaking, speed boost and steering. The camera mode can also be switched from the standard follow the vehicle to a static camera, the latter being a little less intuitive to use. Still, the community asked for it and VooFoo added it.

There aren’t a huge variety of vehicles to choose from in this early release; but the game left Early Access just this week, and VooFoo are continuing to add bits and pieces. Mantis Burn Racing has a total of three classes of vehicles, light, medium and heavy, with new ones unlocking for each class and each skill level. VooFoo has added light sand dune buggies, supercar-like racers, and even trucks to fill the heavy class. They all handle quite differently. These are not highly detailed vehicles, but are perfect for a top-down racer and hopefully more will be added over time.

Vehicles can be customised with better suspension, improved tires, or even improved boosters, but there are no weapons to equip which some may see as a missed opportunity given there’s a bit of a genre history with top-down battling cars. Here though, the development focus is fully on the racing, and in my opinion the lack of weapons makes you focus on the driving and mastering the courses instead of being annoyed that some poxy AI has just ruined your lap by shooting a rocket at you.

Where Mantis Burn Racing really shines is its track designs and environments. The tracks are a joy to race around, with big jumps and even sneaky short cuts to help players pull ahead of the competition. Whether it’s racing around a quarry or a city center at night, the designs are highly polished and can be challenging. 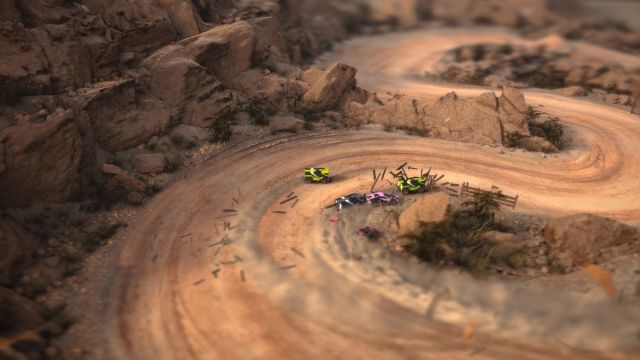 The main talent to pulling off a tremendous victory is in figuring out the car handling on the different vehicles. How you can improve their performance with the upgrades, knowing when to push the speed boost button, and just how far you can push them when taking corners and making the most of a drift or slide.

I do have a gripe with the game and it’s not exactly VooFoo’s fault, because it happens to a lot of indie games. The multiplayer is there but nobody is actually playing. For about a week I have tried to get a game going with other racing nuts but have never had any success. This is a real shame because this is a game that is crying out for a vibrant community. There is a split screen mode but I am not sharing my monitor with anyone. Period!

Should you find someone online to play with, all the race modes and tracks from the single player game are available in the multiplayer so you can compete in the more interesting races such as knock-out and accumulator.r

With few players wanting to race head-to-head, I have been taking on the weekly challenge. This week it was to pass as many vehicles as possible in an allocated timeframe. This is pretty fun and with a new one every week it’s a good reason to fire it up and see if you can top the leaderboard. 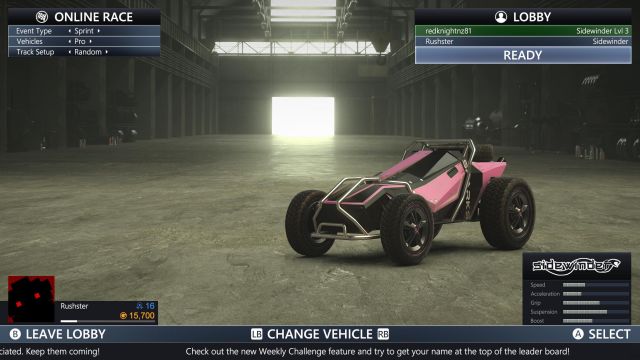 I can see Mantis Burn Racing pulling me back from time to time for a racing fix, but it will need content to be continually added to keep players racing. It’s a decent top-down racer and I have enjoyed it a lot more than I thought I would. It brought back happy memories of playing the arcade classic Super Sprint back in the 80s. Over the top, top-down racing with some serious drifting action.

Mantis Burn Racing is not trying to do anything particularly outlandish, but what it has achieved so far is solid and I do hope more fans of top down racing pick this up.