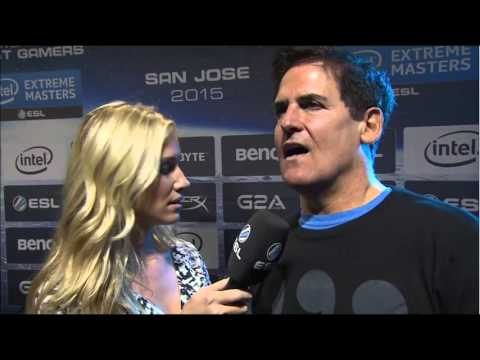 We all know Mark Cuban as a panelist on Shark Tank or maybe even as the owner of the Dallas Mavericks. What we didn’t know is that he could be the next owner of an eSports juggernaut team like SKT T1, Origen, Fnatic or Cloud 9. While it’s not officially confirmed, he says we’ll have to “tune in” to find out more. During an interview at Intel Extreme Masters, Cuban supported League of Legends along with other highly competitive video games.

Going as far as to criticize ESPN personality and FOX Sports expert, Colin Cowherd, on his blatant ignorance. Cuban is quoted saying, “I love Colin, but he is an idiot when it comes to eSports . . . I’m a noob, I’m still getting into it but I love it. It is like playing five dimensional Chess against the world. It is one of the smartest games I’ve ever played, you gotta have dexterity, you gotta be quick. This is a real sport and people are going to figure it out really, really quick.”

What we all know can’t be argued here is that professional gamers have skills and they’re the kind of skills that can potentially make them a bunch of money. We’re talking the top 16 teams at worlds sharing “a prize pool of over $2,000,000 USD” with the #1 teaming walking away with a cool $1,000,000 USD. When you think about their historical 32 million viewers worldwide, it’s really not hard to believe. Whether you want to consider that into your definition of “sports” is up to you personally but eSports seem to be doing pretty well on their own despite the cynics out there.

All we know here is that Cuban is an awfully good sport. He can be seen here in his tres commas shirt playing against some of the best players in the world led by Intel CEO Brian Krzanich. The self-proclaimed noob didn’t really do too awful in this ARAM match up, especially considering he’d only “played three games” prior to this event. Hopefully that will be the spark he needs to join the League Circuit and own the next big team out there. We’ll have to stick around to find out more.