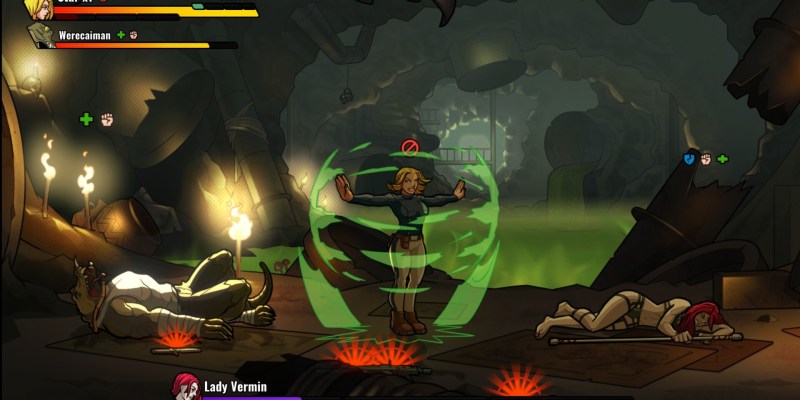 The beat ’em up genre exists in limbo. You can’t do many new things with it, and if you try, people will likely consider it too far away from the norm to be enjoyable. One of the most enjoyable titles in recent years is undoubtedly Streets of Rage 4, a game I’m going to try very hard and not mention repeatedly during this review. Mayhem Brawler makes that difficult, however, on account of its art style, combat, and movement taking some very obvious cues from it. The core is solid, the art is well done, and there are some interesting mechanics on display, but the game can also be cheap, frustrating, and obnoxious.

Mayhem Brawler probably has the most story of any beat ’em up in existence. Fully voiced comic book-style cutscenes bookend each of the game’s levels. The voice acting is surprisingly good, and I’m not sure how the dev pulled that off. The story, on the other hand, is a generic urban fantasy filtered through cringe-worthy social media references. The character who talks the most, Star, loves to open cutscenes with what amounts to a tweet, complete with hashtags. Meeting with each level’s boss also leads into brief dialogue exchanges. There’s no way a beat ’em up needs this much talking.

Honestly, even after beating the game more than once, I don’t remember what the story’s about. The heroes are cops in an urban fantasy setting with one of those “all of the fantasy trope bullshit exists in the same world” focuses that reminds me of the insufferable Dresden Files novels, or that horrid TV show Lost Girl. You’ll meet vampires, werewolves, and street-tough mages. The art focuses on a high-quality comic book style and the characters animate well, which at least makes the game easy on the eyes. There’s also a lot of variety to the enemies. 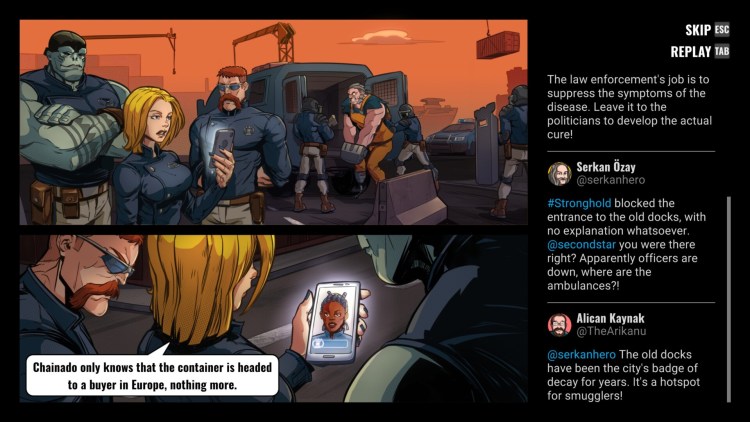 I do that smash and grab

Mayhem Brawler has a campaign and arcade mode. You can select one of three characters: a guy with a mutated arm, a grey-skinned huge dude, and a blond woman with psychic powers. Each has their own stats, but all three are kind of sluggish. You know how these games work. You walk to the right and hit everything in your way until its health runs out. Each character has three bars for special energy. They all have a neutral and directional special they’ll use, which grants them a brief window of invulnerability and allows them to execute their move. I honestly like this better than the “you lose health” system.

You can also execute grabs by walking into enemies, there are jump attacks, and you can block, which is another thing I wish was in all beat ’em ups. The combat itself feels fine, and it’s highly similar to Streets of Rage 4, from the way juggles work to the way characters move. The game can be played in co-op, but there’s no online matchmaking, so you either have to play locally or via Steam Play Together. Beat ’em ups are practically always better with friends, and Mayhem Brawler is no exception.

That isn’t just due to the nature of co-op, but because of how unbalanced and irritating the enemy movesets are. In Mayhem Brawler, lots of enemies have annoying levels of hyper armor. They can also knock you down insanely easily, to the point that there are lots of times where fighting foes just leads to you getting knocked down over and over again while trying to fight them. There are a lot of individual annoyances to specific enemy characteristics as well. It feels like the game wants to be hard, but didn’t offer a high level of complexity to the game’s systems, so bullshit was loaded instead. However, with a second player, much of this is mitigated, as having two of you stops enemies from ganging up on you so mercilessly. Plus the other player can attack the enemy during their long grab animation. 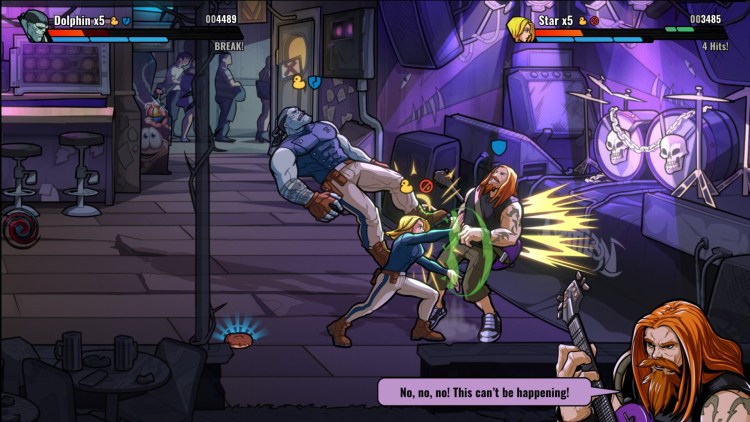 Ah, you grabbed me, what a surprise

If you want examples, I have examples. One enemy is a vampire that carries a blade. You’ll surely run into more than one of these at once, at which point you’ll notice that they can easily stunlock you to death with little chance for you to escape. Mayhem Brawler is generally fond of just throwing enemies into levels willy-nilly, so maneuvering and being defensive can feel pointless. Then there are the werebeast enemies. They can grab you whenever, launching at you from across the screen, and grab you mid-combo. Whatever.

Oh, and their grabs are followed up with multiple hits. You can block grabs, but that doesn’t help much when you’re grabbed in the middle of a combo. But remember when I said the movement was kind of sluggish? Those don’t mix well. Sometimes, you’ll walk to the right, only to be greeted by three enemies with machine guns standing behind barrels. They start shooting immediately, so if you don’t block right away, you’re set to eat bullets. A lot of enemies have wake-up attacks that they use every single time they get knocked down. They’re not a big deal, because you’ll learn quick and you can just block their attacks, but it’s tedious nevertheless. Especially the ranged enemies.

But one of the more incomprehensible decisions Mayhem Brawler makes has to do with its bosses. Bosses are mostly annoying to fight, and for most of their battles, you just need to treat them like a regular enemy with extra health. But when you get their health bar down to the last third, they all share a mechanic. Every time you hit them, they have a counterattack. Some get immediate hyperarmor and break into a long combo. One boss teleports immediately. You might be wondering, “gee, how do I damage them, then?” The answer is to jump kick them. Then block if they have a wake-up attack, then rinse and repeat until they die. It’s stupid. Victory via chip damage is not fun. 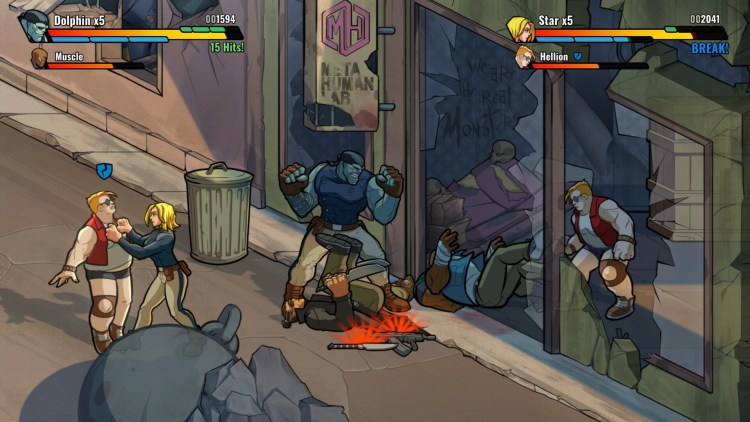 One unique attribute of Mayhem Brawler is that you get two choices on how to proceed after each stage. These can end up with you getting one of three ending stages, which is a neat idea. Each campaign run has seven levels, which range from five to 12 minutes in length, so it doesn’t take long to get through. This is far from a bad game, but it’s too generic to stick out for its presentation and too annoying to let its gameplay do the talking. If you just want a short beat ’em up to play with a friend, then there’s some amusement to be had here. But this is far from the best beat ’em up you can buy on PC.

Visually-pleasing, but shallow and overly derivative. Far from a bad game, but there's nothing here to separate it from the pack.