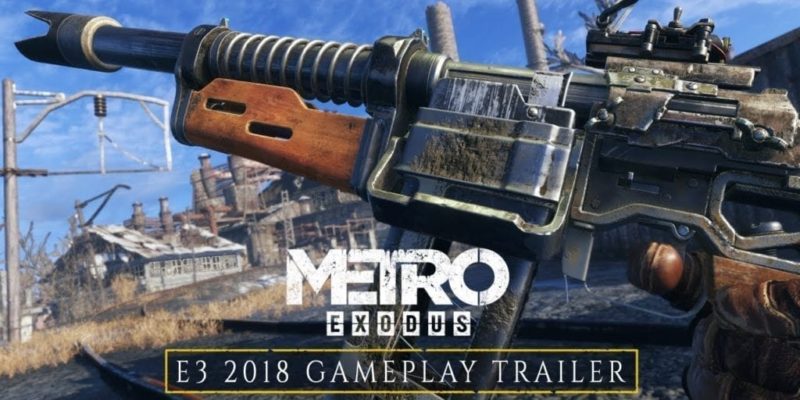 I was excited early on for Metro Exodus. The initial trailers for the game showed off some of the snowy, Russian environments. I remember thinking that it really looked like a game I would like to play. I enjoy first-person experiences with large maps with a ton of nature to conquer. That’s one of the reasons I’ve enjoyed the Far Cry series over the years. And, for Metro Exodus, the team at 4A Games has crafted a comparable contender.

There’s no doubt that the gameplay demo that I played at E3 still needed quite a bit of polish. There was still visible room for optimization improvements, bugs, and a few characters not fully animated. However, all other mechanics for the game were fully functioning and complete. The character models looked amazing up close, and probably some of the best I’ve seen in a video game in a long time.

Metro Exodus is setting itself up to be a massive game. According to the development team, the game will be twice the length of previous Metro titles. This is particularly important as the game now stretches over an entire continent vs a single city. In the short gameplay demo, the character, Artyom,  had to paddle a small boat across a stretch of water and explore an old train yard to complete some small missions.

There were a variety of guns also introduced in the demo. I had started off with a silenced pistol, and later become intrigued by the sawed-off shotgun. Something to note was the way in which the smoke from shotgun blasts dispersed after firing. It was very realistic and something cool to see after each blast.

The first part of the demo had us liberating a cult-like church. The silenced pistol was effective in stealthily taking out enemies. A short time later, a pneumatic weapon known as the Tikhar rifle, became available. This pump rifle seemed very unique in its design, having been seemingly pieced together by scrap parts. You are also able to craft bullets on the fly for this gun. You can loot both chemicals and materials as they are a part of the crafting system in the game.

I’m excited to see the variety of dangers that may lay in the rest of the game. The short demo showed human enemies and two different kinds of monsters that attacked on land and water. The environment, too, also could become dangerous. Various pockets of radiation will make your Geiger tick. Once you encounter radiation, it then becomes time to don your mask to avoid being poisoned. Medkits seem like they will be an extremely crucial resource as health management from the environment and enemies is a must.

I’m genuinely excited about Metro Exodus. I feel like it’s going to be a game that I can pour hours and hours into, offering a variety of weapons and missions. The crafting system, combat, and gunplay were all very well done. It is officially a game that’s on my radar—and should be on yours too.

Fallout 76 beta on Xbox first and not playable via Steam