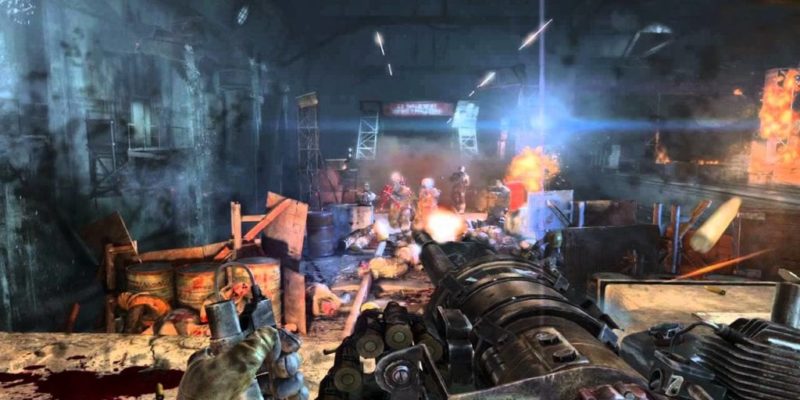 If you liked Metro: Last Light as much I did, rejoice! The first of the four DLC packs has just been released, and the rest have been pretty heavily detailed.

This one – the Faction Pack – offers players the chance to take on the role of a character from each of the game’s primary factions, each offering a different taste of gameplay. The Polis Ranger looks to offer some surface-based scavenging and monster battling (and Metro 2033‘s dreaded Librarians look like they’re making a return appearance). The Red Line Sniper looks to focus more on stealth combat against human enemies, with knife and sniper rifle. The Reich Heavy, on the other hand, looks like it’ll have you wade into combat with lots of armour and weapons, screaming and laughing as you fire off a few thousand rounds a minute. Something for everyone, then, plus three bonus weapons – the Hellbreath, Medved, and a silent sniper rifle.

As for the other DLC packs: the Tower Pack is a challenge-based game mode with online leaderboard support, with players fighting their way up a combat simulator called “The Tower.” The Developer Pack has a shooting gallery, an “AI Arena”, and a Metro Museum… and a solo mission called The Spider’s Nest, which “offers some new tools for dealing with an infestation of the skittering spider mutants”, and that’s fantastic because everyone knows how much I bloody love spiders in games. Finally, the Chronicles Pack will give players control of three of Last Light‘s main characters – Pavel, Khan, and Anna – as they go through their own side stories.

The Faction Pack is out today and costs £3.99, or you can pick up a Season Pass for £11.99 and get each DLC pack as it’s released. There’s a trailer for the Faction Pack below, but be warned – paying any real attention to a few of the segments will most definitely ruin parts of the plot for you. So, y’know, stay away if you haven’t finished the game already.