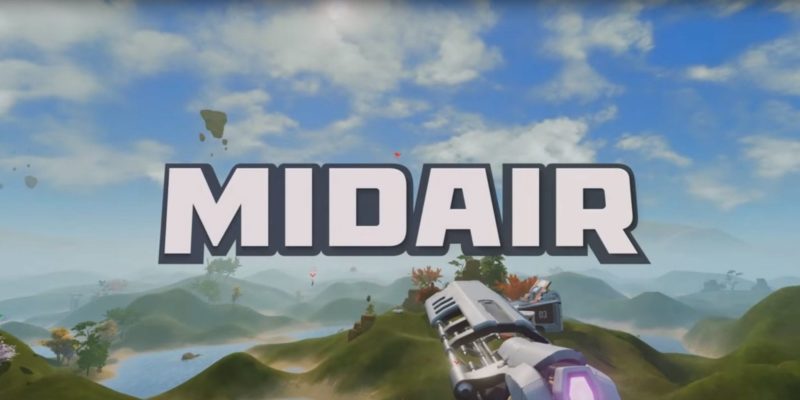 Tribes was a game that had me hooked. Playing into the early hours with teams of friends was just fantastic fun. Sadly it fell away and Tribes 2 just didn’t quite capture the magic of the original. Hi-Rez Studios then picked up the IP and launched Tribes Ascend but again they didn’t manage to capture the great gameplay of the original Tribes and drove the game into the ground before eventually pulling the plug. A real missed opportunity. 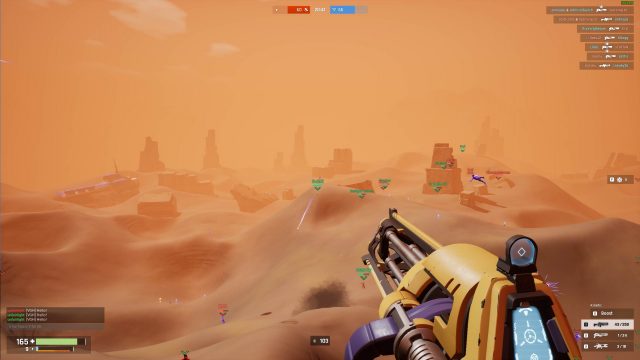 I managed to play quite a bit of Midair while it was still in development but have refrained from playing for about six months while the development team continued to work on the game. Now that it’s actually out, you can get a better idea of where they were heading.

Like most free to play titles, there is a progression system where players have to earn points by playing to unlock weapons and the ability to command vehicles. Archetype also offers what they call the Manaborn Game Pass which unlocks everything in one go for around twenty dollars. It’s their way of monetising the game and it’s aimed at players that don’t want to grind for the unlocks. That said, players can unlock the basics reasonably quickly after a few games and the basic free to play loadouts are enough for players to be effective in combat. Don’t let the fact there’s a progression system be a reason to stop you playing Midair. Archetype also sell Voice Packs to augment the income and no doubt other cosmetic customisation will appear in time. There are loot boxes which are awarded periodically while plating which so far have all been weapon skins so nothing to fear there.

Seasoned Tribes players will be more than familiar with the gameplay. Three different armour classes of Light, Medium, and Heavy, vehicles, CTF mode which was always the most popular Tribes game mode, LCTF with no medium or heavy armour units and fewer weapons, Team Death Match for the trigger-happy, and Rabbit. Simply put, Archetype is doing their best to cater to the Tribes audience. 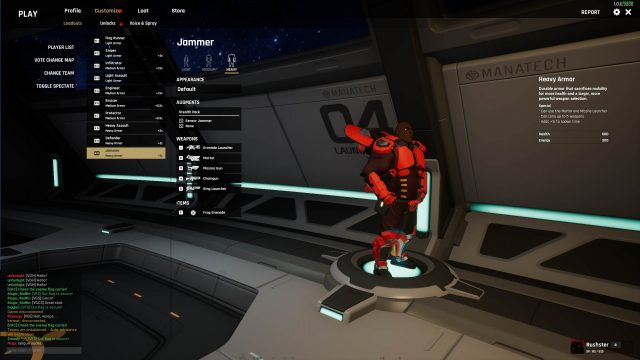 Jumping in for the first time in a few months didn’t bring any huge surprises other than the game looking a bit more polished. That said, there is definitely evidence that the game might not have been quite ready for a full launch as the UI is rough around the edges. The tutorial missions have been polished up and are a good start for new players not familiar with the game, but once you actually start playing, new players are going to have to muddle through with the loadout and character interfaces. They are really quite basic and don’t explain clearly how to change loadouts and why certain weapons won’t equip which is usually down to stuff not being unlocked. It’s just not intuitive and it’s an area Archetype still need to work on if they want to encourage new players to try the game.

Midair attempts to recreate the physics of Tribes where players could ski their way across the maps by using the terrain. In the original Tribes, there was a real art to knowing exactly where to land on the terrain and use it to propel you forward with the jetpack. In Hi-Rez’ Ascend, a key could be pressed to make the player ski automatically and this addition removed the skill of skiing across the map.  Midair has opted to keep the keypress to ski option which again removes the skill of performing an effective ski jump and the fun and satisfaction of nailing it. 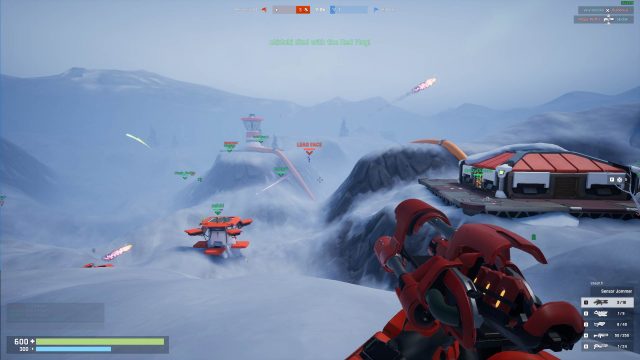 Features that have carried over and are essential to any Tribes-like game include the bases and their defenses. Bases come with a Generator which powers the automatic defense turrets. Losing the generator and the power will disable the defenses and important terminals to change loadouts so these need to be protected and repaired when damaged. It’s a model that worked brilliantly in Tribes where players would make use of the different armour types to be effective in the different roles to keep a base intact and to a certain extent this applies in Midair but it’s less strict thanks to customisable loadouts. On the levels, Midair comes with a repair tool which is usually located close to a generator and this has to be picked up off the wall and carried to the object needing repairing, it’s the same system that was used in Tribes Ascend. Keeping the base powered is something new players are still getting to grips with though which can be frustrating.

Vehicles are also available, (assuming you have them unlocked), and they come in three forms. The Fighter for fast air combat, the Tank which can also take a gunner, and the Bomber which can take a pilot and bomber. The vehicles in Midair are probably one of the game’s weakest elements. They are clumsy and difficult to control, they are just not very responsive and tend to do some really weird stuff, especially the tanks which roll over far too easily. In the original Tribes you could easily hop on one of the Scout flyers, leap off, grab a flag and try and make a getaway. In Midair, however, the vehicles are more like Tribes Ascend which are geared towards adding extra firepower on the battlefield. The problem is they do tend to end up being sitting ducks and less useful than they should be. It’s probably why you don’t see players opt for vehicles very often in Midair games. Right now they feel a little useless. 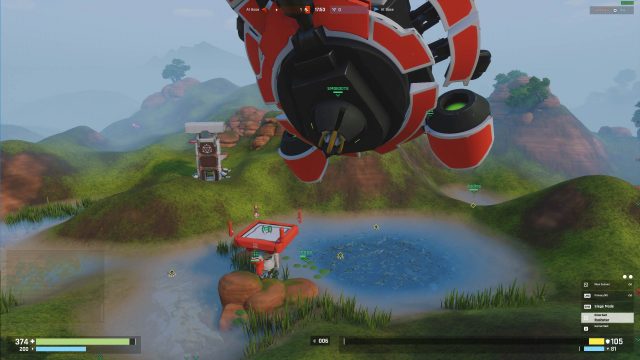 Tank decides to flip for no reason.

There is a good variety of weapons on offer and Archetype have brought over all the classic Tribes weapons such as the disc launcher, chaingun, plasma gun, heavy mortar, laser rifle for sniping, mines, and grenade launcher. All serve different purposes but a personal favourite is the rocket launcher with its lock-on ability. It’s great locking on to a player as they are going for the flag then watching them fall to earth when the rocket hits. The weapons are pretty good in Midair and most of the time the Disc Launcher is the weapon of choice as it should be. If you manage to take out a player Midair with a disc it’s particularly satisfying.

What every Tribes player probably wants to know is how is the movement? Movement in Tribes was very important when it came to how your jetpack responded and how the skiing felt. The movement in Midair is not bad but it does lack a certain something and feels a little clunkier than I would expect to see, controlling direction in-flight feels a little off. It’s hard to explain but there is definitely room for some improvement in Midair.

I have mainly been playing the CTF mode, because that’s what’s everyone is playing, and there are five maps in a rotation which are quite well designed with plenty of slopey terrain to help players traverse the map by skiing. The layout of the bases is hit and miss though and on a few maps the bases feel like a bit of an afterthought. Overall though, the maps are pretty good but there are a couple that look quite similar. 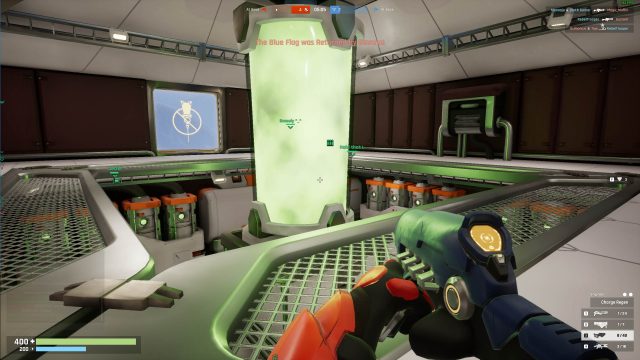 Archetype has a real challenge with Midair, they want to please the die-hard Tribes fans but at the same time make it accessible to new players. Tribes players will get to grips with this no problem but gamers not familiar with the classic franchise are probably going to struggle for awhile and that’s in part due to the UI, loadout system, and importance of roles. Being able to customise the loadouts in Midair more than you could in Tribes in a way makes it a little more confusing for new players and that could be a problem when trying to get them to stick with it. Right now there are players not fully grasping the nuances of the gear and also not playing the objectives which are essential to having an enjoyable match. There are also players that have been intentionally team killing too which is just so bloody annoying.

It sounds like I am being particularly harsh on Midair, but despite its niggles, the game is enjoyable, especially if you were a Tribes player. Just don’t expect it to play exactly like the original Tribes and take it for what it is, a cross between Tribes and Tribes Ascend with a few twists. Archetype has perhaps pushed this out a little early, but now it’s launched, they can hopefully concentrate on refining the game a little more. Taking feedback from new and seasoned players could be the key to its success.

Midair is definitely worth a look because it’s free to play and in time could attract a die-hard following. There’s nothing really like Midair around at the moment which is definitely good news for Archetype.

A valiant attempt at recreating a Tribes-like game but it still needs some work and refinement.

Venture Kid Review for PC – Not Quite Mega Man

By Steven Wong3 hours ago
Reviews

By Blake Grundman4 hours ago
Reviews