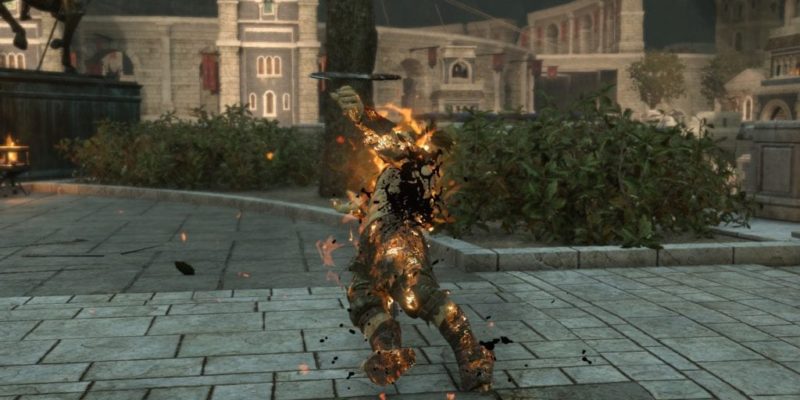 Monolith’s Tolkien … well, let’s be generous and say ‘inspired’ … series has a bit of PC pedigree around here. Shadow of Mordor won our 2014 Reader’s Award for Best PC Port, most likely because the modified LithTech engine helped the game to run well on a wide range of hardware. Shadow of War appears to once again use the (even more modified) LithTech engine, now rebranded as Firebird. Here’s how the PC version shapes up this time.

The game is a 66GB download on PC, with another optional 30GB in the form of 4K cinematic cut-scenes (20GB) and a 4K texture pack (10GB). For the purposes of this article I do have the textures downloaded, but not the 4K cut-scenes.

Normally in these pieces I’d start by running through the settings and display options, but that was covered in this menu-tastic post from yesterday. If you missed that or can’t be arsed to read it and just want the menu pictures, here’s a gallery.

The Good: Loads of resolution support (up to 8K if you fancy it), 21:9 ultra-wide is partially supported in that it works in-game, but not for the cut-scenes. Extensive customisation options for the HUD; you can pretty much toggle any aspect on or off. Generally wide range of graphics options, and very good indications (text and visual) regarding hits to system RAM, V-RAM, and overall performance for each option. Uncapped frame-rate if you wish, with lots of other options in between. Keys can be rebound.

The Not So Good: But although keys can be rebound, you can’t decouple them from other functions. So if you don’t want to sprint with Space, that’s fine, but changing it will also change a load of other actions (like dodge rolling). Controller inputs cannot be changed. An FOV option would be welcome, to pull back from behind Talion a little bit. Anti-aliasing options are a bit sparse (FXAA, TAA) and TAA looks a bit like soft-focus Vaseline-lens.

The Bad: Mouse acceleration is back in Shadow of War and there appears to be no way to switch it off. Hopefully this will be patched in. Oddly, you can alter gamepad acceleration.

The Weird: No matter which options I choose, there’s always a small dark square in the upper left-hand corner of the screen. Looking around for an explanation, most people attribute it to Nvidia’s Ansel function. But that’s presumably incorrect, because I’m using an AMD card. The square is pretty easy to ignore but … is odd. Anyway, that’s why all of my images have a small square on them. I imagine there will be a fix or explanation for this before too long.

Here’s a comparison between the graphics set to Lowest, and set to Ultra (including the 4K textures). 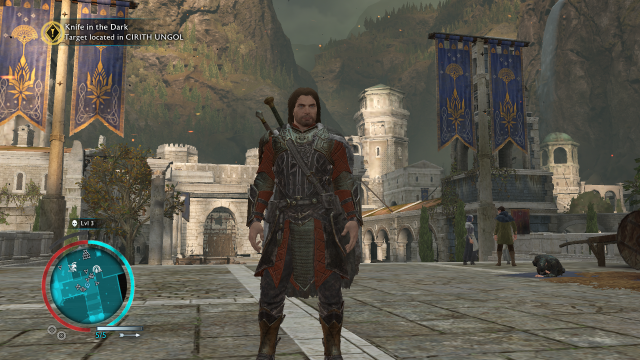 Lowest of the Low. 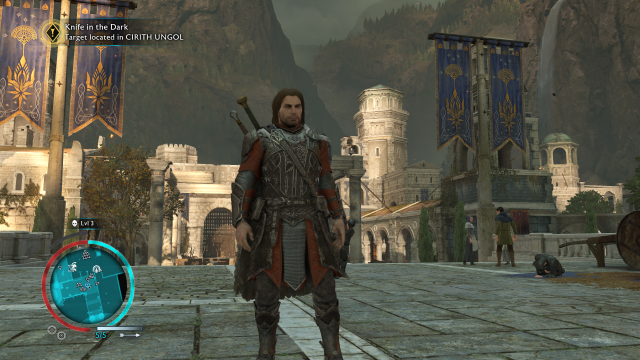 And, as a companion piece, here’s a pair of benchmarks from Lowest and Ultra. I’m not entirely convinced the benchmark tool in Shadow of War is absolutely accurate though, because it seemed to over-estimate my ability to run the game at Ultra. It shows an average FPS of 35, but I didn’t see it get above 30 when actually attempting to play at that level of fidelity (it was more hovering in the mid-20s). 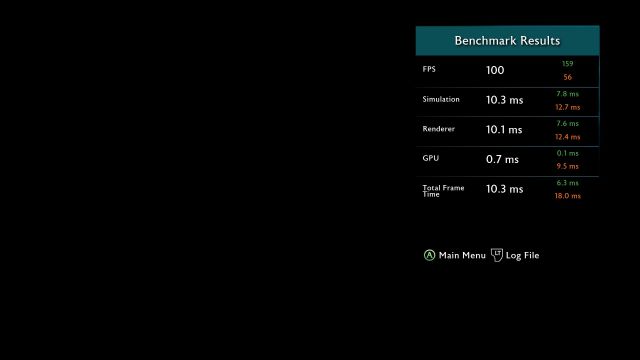 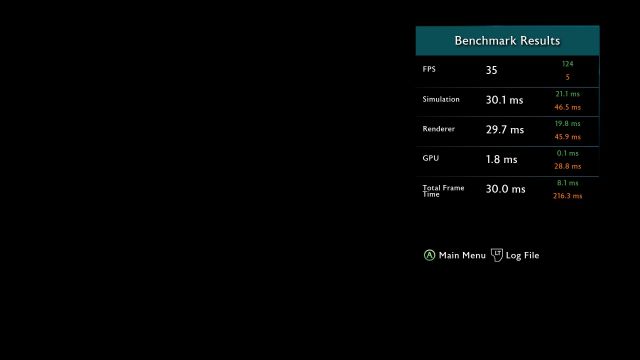 Despite having a mid-range GPU from a couple of generations back, it’s not too difficult to squeeze a (mostly) consistent 60fps out of Shadow of War. A mixture of High/Medium settings (and a few outlier Ultra ones, like AF) does the trick. Here’s what I’ve been using, at 1080p. Pushing it a bit in some places (the exclamation points), which I may have to tone down if later sections of the game get more demanding. Dynamic Resolution is switched off, incidentally – that would obviously throw things off. 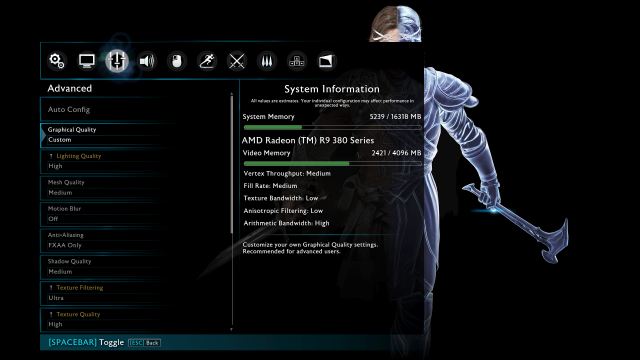 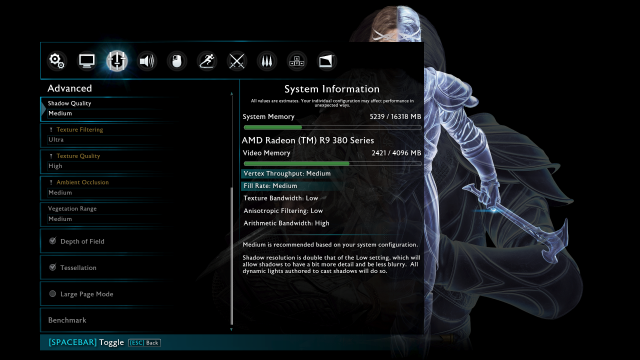 And to see that in motion, you can watch the short video below. It’s from not too far into the game, in Minas Ithil. A bit of parkour, a spot of Orc bashing, and a dip into the menus. There are minor dips, but it’s basically 60fps. Promising performance for anybody else hoping to play this game on older GPU hardware.

Overall, Shadow of War feels like another strong PC version. However, the most noticeable failings are, unfortunately, in the realm of PC-specific controls. The key binding is somewhat limited by multi-purpose actions, but the real problem is the default mouse acceleration that (at least at the time of writing) can’t be disabled. If you’re opting for a gamepad, on the other hand, you’ll be fine (PS4 button prompts aren’t in the game yet, but are confirmed to be coming).

Things are unambiguously better when it comes to display options and the degree to which the game can scale to older or newer hardware. That my older GPU can (just about) hold a solid 60fps at 1080p in the same title that allows for an 8K/Ultra combo is exactly what a good PC version should be aiming for. Shadow of War doesn’t get top marks in all areas, but on the fundamental level of how the game actually runs on a myriad of PCs, there shouldn’t be too many complaints.

By Joshua Chu22 hours ago
Reviews