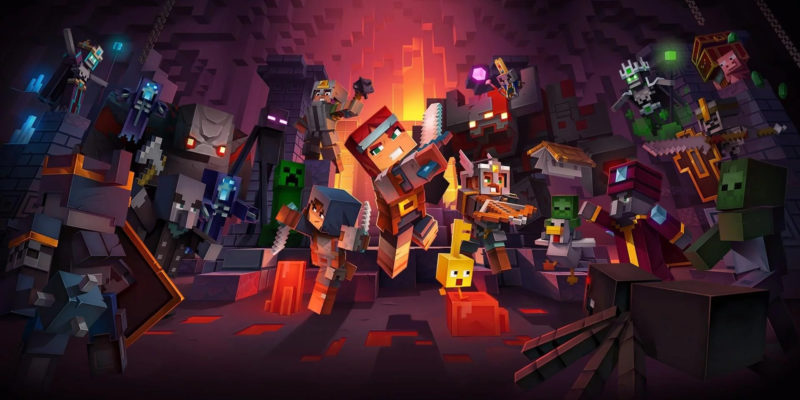 Mojang Studios’ isometric action-RPG Minecraft Dungeons has received a lot of updates in its relatively short life – just over five months. The DLC content has sent players to the steamy jungles and wintery domains. These DLCs have also added a bunch of new features to the action-adventure. However, a standout feature that’s always been missing from Minecraft Dungeons is cross-play. But that’s about to change.

On November 17, Minecraft Dungeons will finally allow players to join forces with people on different platforms through cross-play. Players on Windows PC, Nintendo Switch, PlayStation 4, and Xbox One can all join the cross-platform party.

Mojang Studios doesn’t look like it’s slowing down with Minecraft Dungeons any time soon. In December, the action-RPG will take players to new heights with the Howling Peaks DLC. Players will have hordes of new mobs to battle, as well as a new boss in the form of the Tempest Golem.

Around the same time that the Howling Peaks DLC arrives, Minecraft Dungeons will receive another free update. It will add much tougher challenges for veteran players. The current hardest difficulty in-game is Apocalypse 7. This free update will add 20 difficulty levels beyond that – a significant increase.

With all of the new challenges on the horizon, it will be nice to have a larger pool of players from different platforms to partner up with.

Heroes, are you listening?!

Cross-platform play arrives on November 17 for Nintendo Switch, PlayStation 4, Windows and Xbox One! It’s almost time to join forces – whatever platform you play on! pic.twitter.com/wDusUWYYOY

If you haven’t dived into the cubic adventures of Minecraft Dungeons yet, you can pick it up from the Microsoft Store for $19.99 USD, not including the DLCs. Alternatively, you can purchase the Hero Edition for an additional $9.99 USD, which does include the DLCs. Minecraft Dungeons is also available through the Xbox Game Pass.

You can also check out our Minecraft Dungeons guides and features hub if you need any assistance with the battles ahead. There are beginner tips, item and artifact guides, as well as tips to help you defeat the Arch-Illager. Did I mention there’s a Secret Cow Level?