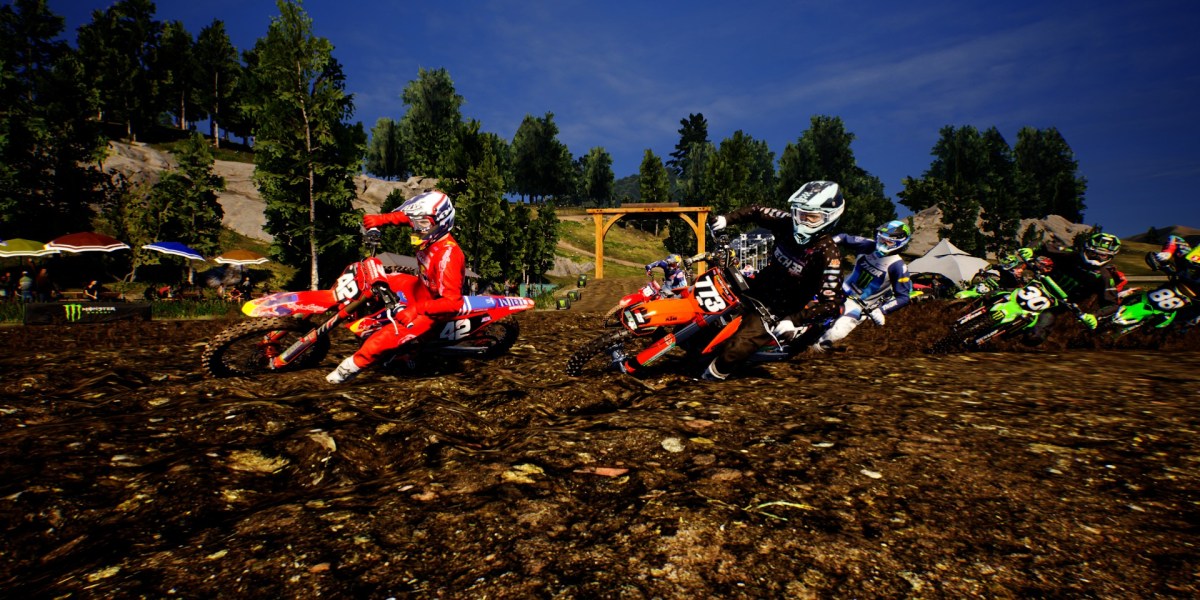 Cycling is a passion of mine, and it has been for a few years now. Dirt bikes are obviously a different breed, but I have been interested in trying them out one day. And that’s what spurred me to dive into Milestone’s Monster Energy Supercross – The Official Videogame 5. The last time I played an entry of the franchise was with the second edition all the way back in 2019. Now that the series has had three years to mature, I figured the experience should be even more refined and engaging. After all, I gave that game a whopping 9/10.

What I can say for this year’s effort? The authenticity of its sim-tailored mechanics are still present. However, there are a few screws loose in the chassis which hold it back a few notches from offering a genuinely fun and wild ride.

It didn’t take long for me to feel a sense of familiarity within my first few minutes of firing up Monster Energy Supercross 5. Despite the fact that it’s been exactly three years between now and the last time I payed the second entry, the necessary twin-stick control scheme of the game almost immediately flooded back into my memory.

On that note, I’ll quickly give this a nod for the way this particular control style spices up the experience. Like before, I find it to be quite authentic and truly sets it a part from the majority of other racers that feature motocross. 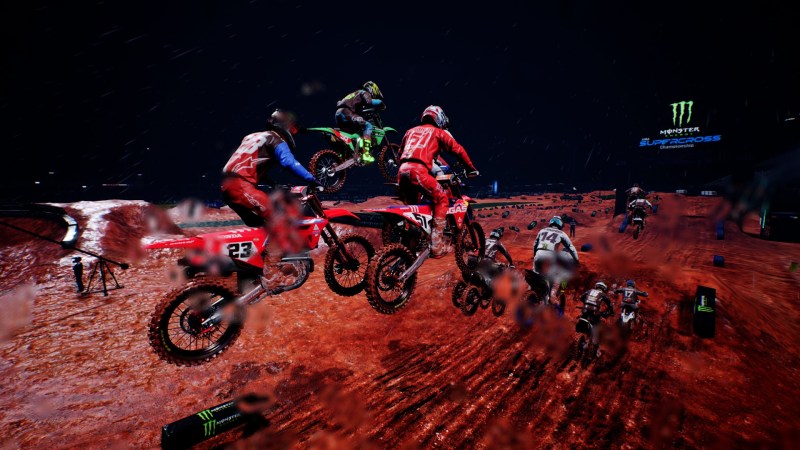 In such games like The Crew 2 and Riders Republic, motocross is just one racing discipline out of a candy jar selection of others. Controlling the bikes in those games is far more simplified and arcade-like. It’s expected so as not to overcomplicate matters. But here in Monster Energy Supercross 5, where the focus is squarely on this control scheme, the experience is practically tailor-made for it.

This, however, is the exact reason why I’m a bit let down by Milestone’s offering here. Three years ago when this series was still fledgling, any sort of simplicities and oversights could be expected and arguably excused. But, now has aged half a decade, you’d expect the formula to grow more refined and provide an even richer experience. It hasn’t. 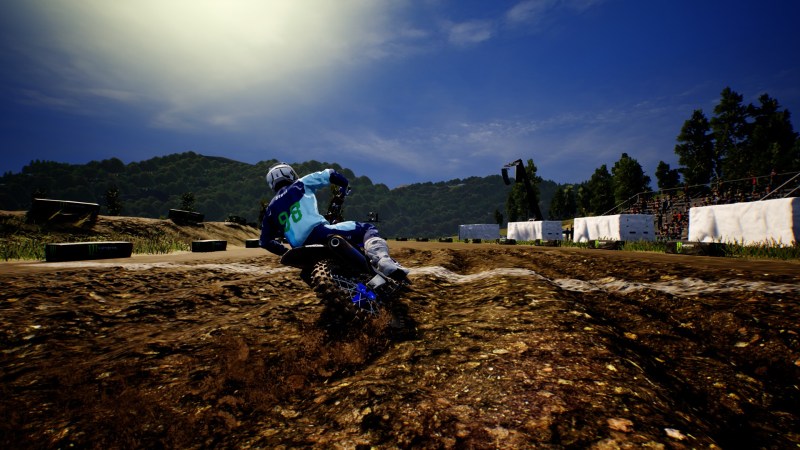 I’m not expecting the gameplay to be dramatically different considering that the game is still a part of the same series from three years ago. But the fact that it’s so similar screams not consistency, but monotony. Like a grinding motor, the coding behind the game feels quite aged and worn, and is in desperate need of new parts.

In the near seven hours I spent trudging my way through the Career mode, Supercross 5 just felt like one long, drawn-out slog through the mud. There were moments of excitement, certainly. But, truly, this turned into a “just get it done” kind of experience, which is never great. When I go into this mode, I already know what I think of the title and what I’m going to say in a review. But I have the duty of getting to what counts as a theoretical end of the experience to provide a properly concise markup of the game at hand.

So, I did. I played through all three classes of the Career mode, all the while hoping there would be some standout moment that could add a little more pizzazz to my conclusion—it never came. By and large, this is still very much the same game I played three years ago. 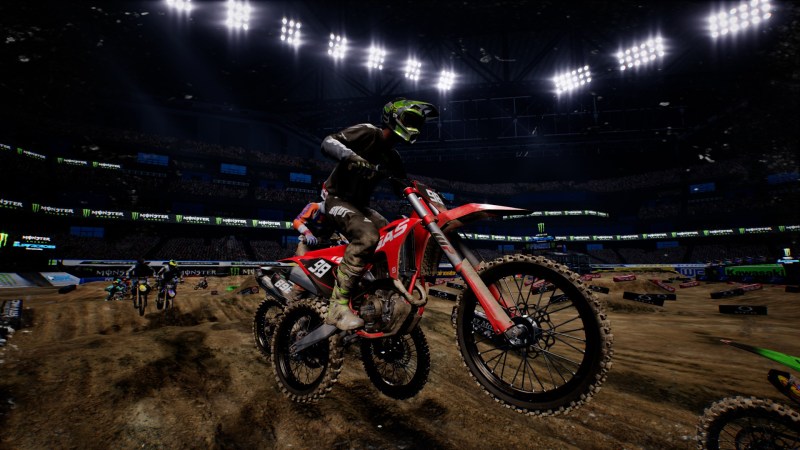 Where the experience counts

As alluded to earlier, the experience of Supercross consists of you using both analog sticks to precisely control your rider and bike through the rough-and-tough terrain of each track. These tracks are riddled with short jumps called “Whoops” where you need to keep your weight towards the back to not lose speed. Then, there are the hairpin turns that call for smooth, tight drifts. And, of course, there are the signature succession of jumps that require you to shift the weight of your rider at precisely the right time to cover the most distance.

All of these technical portions of the track are accompanied by an overall cramped design. It not only often leaves you little room to land smoothly, but also you have to watch out to not slam into other riders as that will both knock both you and them out. 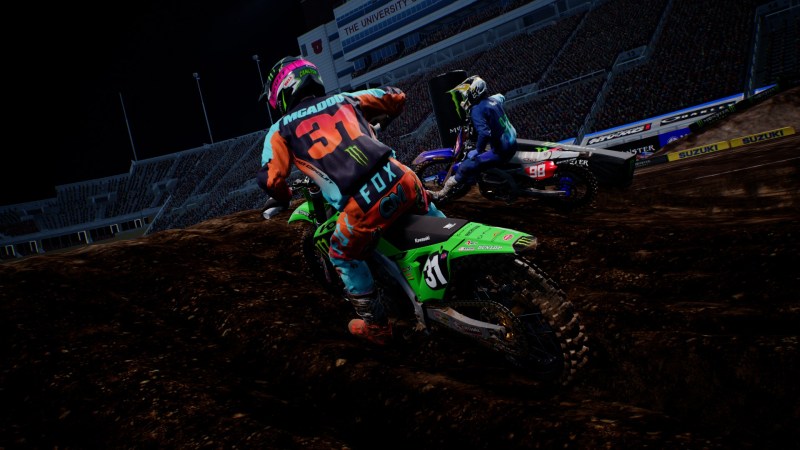 Yet, still, such accidents are quite the frequent occurrence in Supercross. Thankfully, there is a trusty rewind feature that allows you to select the exact moment from which you want to restart. There is an intuitive spin on this, however: you only have three bars for rewinds.

While limited by nature, the rewind bars can be refilled. To do so you need to successfully pull off tricks like landing smooth jumps, nailing drifts, and executing cool techniques like scrubs, whips, and flips. It’s a fun system that rewards skill. Not to mention the intensity of the close-knit nature of this form of racing is enthralling and nervously enjoyable itself.

So, why am I riding Supercross 5 so hard? Because, again, the bar that was set so long ago has yet to be bunny-hopped. 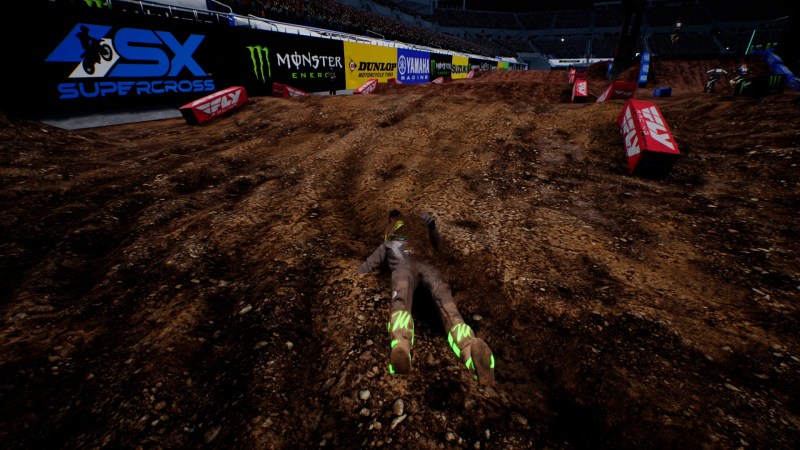 Riding with a worn-out chain

In just about every aspect of its offerings, Supercross 5 is rather repetitive. So, it especially doesn’t help that this repetition also includes being an echo of entries long past.

The design of tracks is arguably diverse in terms of different layouts — there are even multiple layouts within the same stadiums. But it’s those very stadiums that kind of take away from the experience for me. Sure, dirt is dirt and mud is mud; it’s hard to make them look different from place to place. But even though there are multiple real-world stadiums featured in Supercross 5, you could’ve told me that all the races took place in the same location just shifted around and I’d completely believe it. From a visual perspective, it’s simply boring to keep slogging through the same terrain, even if the layout changes.

The game attempts to diversify the selection a bit by taking you out to fully outside tracks. However, these are all regulated to one-off event races that happen in-between proper career progressing events. I would’ve love to see more of such tracks being featured, especially in different locations. 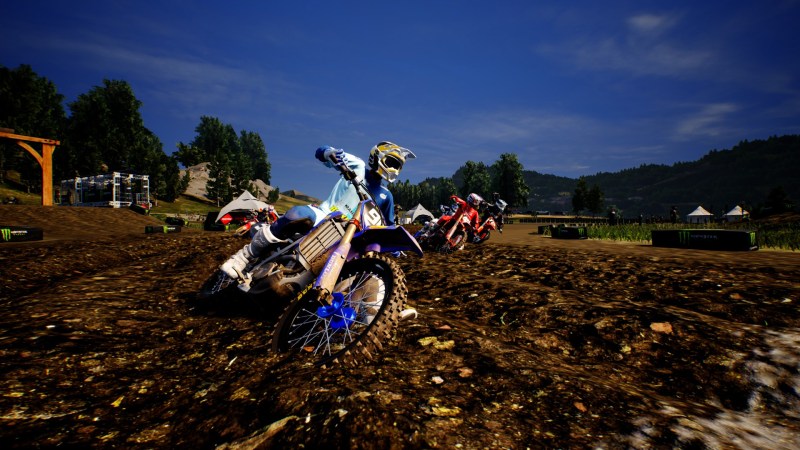 How about going from an outside track in say, the flat, subtropical scenery of Florida, to the mountains of Colorado? Options like that also would especially help with diversifying the weather factor. While there are races that take place in the rain, for instance, it took five hours for me to participate in one during the career. And even when I did, it just made everything look slightly shinier. The wet mud and grime, which should now be far thicker and slicker due to the rain, didn’t really coat the riders as it should have. This also did not make traction all that much more difficult to find and maintain, which would’ve been more realistic. If the effect is present, it wasn’t pronounced enough for me to truly notice.

Other modern games like SnowRunner have now shown us how beautiful authentic mud and dirt simulation can look, not to mention feel. Seeing a title, especially one with sim mechanics, release in 2022 with such basic effects as is rather disappointing.

Kick some dirt up

That said, the visuals as a whole are rather underwhelming. Supercross 5 looks fine, but that’s just it — fine. It’s not jaw-droppingly beautiful, nor is it necessarily ugly. Really, yet again, Supercross 5 doesn’t look any better or worse than its three-year old predecessor. Considering we’ve now entered a whole new console generation, and PC graphics cards are more capable, this is yet another letdown.

The sound presentation is no better, either. The motor noises are satisfyingly loud, grungy, and pronounced, no doubt. But then there’s the voice acting  of the commentators. It isn’t bad, but it too is flawed by repetition, due to the same lines being spoken at the start and end of every event. Supercross 5‘s soundtrack is the weakest link, as it became painfully obvious the song selection is as paper-thin as the rest of the game’s ambition. The collection of hard rock certainly fits, but considering that I kept hearing the same handful of songs so much I just flat-out disabled the music and played my own tunes instead. 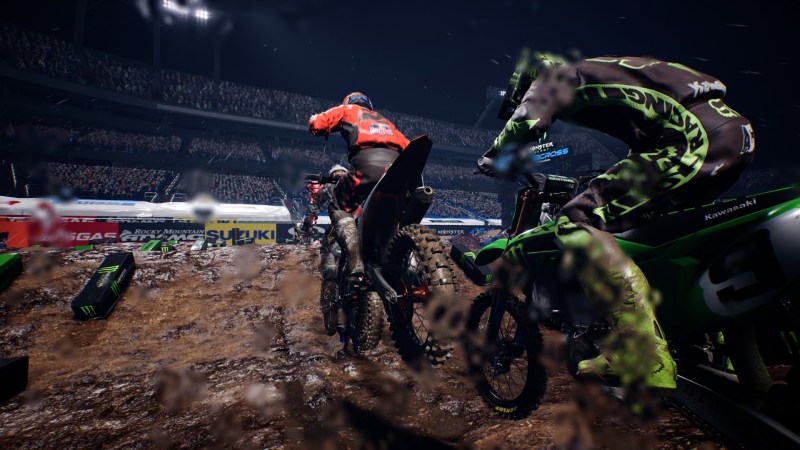 Another odd aspect of Supercross 5 is that the AI difficulty is skewed. Playing on “Easy” resulted in me sailing miles ahead of the competition in most races, but also having to settle for 10th when a random difficulty spike occurred. “Medium” helped the NPC drivers to up their skill, but to a strangely high degree that no longer felt fair for a novice; it should have put myself and the AI on a somewhat even plane.

Regardless, winning events will nab you some credits that will quickly accumulate; and that’s about all they do—accumulate. I hardly used them outside of a few cosmetic purchases here and there (which are hard to find after you buy because they’re not properly indicated unless you highlight them). You can also use credits to immediately heal any injuries your rider suffers after a race. Considering I always had more than enough to cover the costs, it makes having an injury system practically meaningless.

There are also skill points you earn to enhance perks like better air and ground control. But it’s hard for me to determine if they truly make an impact or if I was just getting more used to the controls. 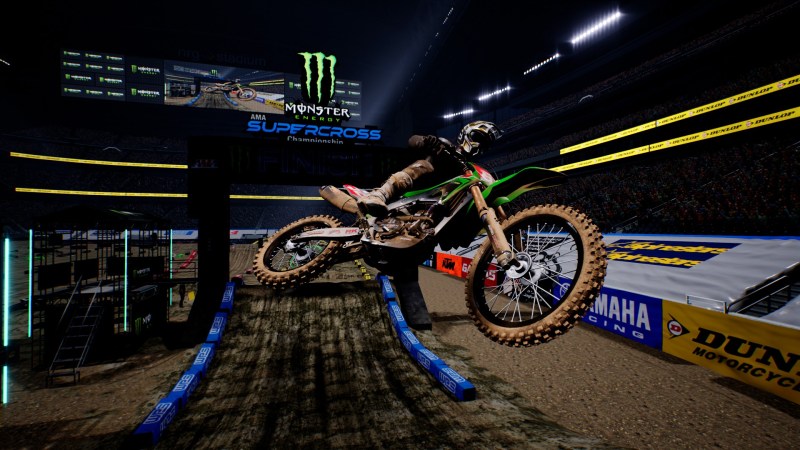 Looking back on Monster Energy Supercross 2, I believe I awarded that title a 9 because of its authenticity. From a mechanics perspective, having such complex physics made for an interesting gameplay experience. But, now, seeing that series has hardly pushed the needle much further is inexcusable.

Monster Energy Supercross 5 isn’t really a bad game. I wouldn’t even necessarily call it mediocre. Outside of some serious stuttering issues I encountered randomly, it’s not broken. But, it is too plain and simplistic at this point in time. Its riding physics are about all that it has going for it. The game is simply coasting along in the ‘Lane of Mundane,’ and it doesn’t have the flare — the oomph — to pull ahead. So, while this thing drives, it does so by sputtering its way down the road, clearly not trying to catch anyone’s eye.

Now five entries into the Monster Energy Supercross series, the latest is running on fumes. While the sim-like mechanics of its driving model are nice, the overall package is bland, repetitive, and shows barely any progression from past entries.

Call of Duty: Vanguard exploit is allowing players under the map