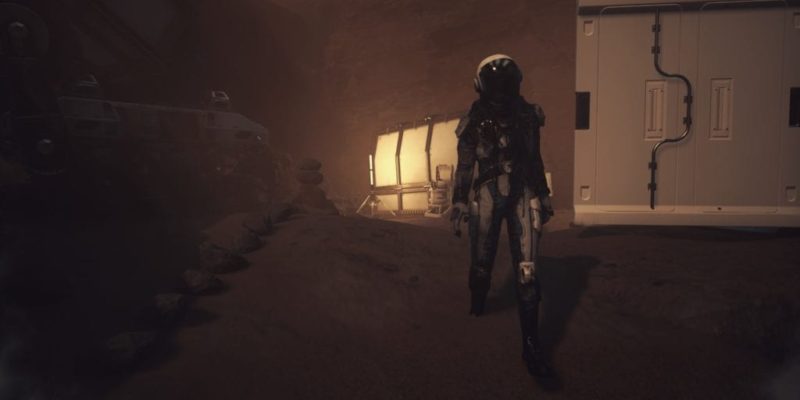 It’s almost Halloween, and you know what that means: costumes, candy, and narrative-focused first-person horror adventures based around the Cthulhu mythos! That tried and true formula is very much on display in Moons of Madness. Only this time, it’s in space! Is this game a spooky good time, or should you look for something else to scratch your Lovecraftian itch?

Moons of Madness has a setup typical of these sorts of stories. You play as Shane Newehart, an engineer working on Mars. The game opens, as they often do, with him having a nightmare that teases what’s to come before you go about his daily life for a couple of hours. Naturally, some things-that-should-not-be show up and everything goes sideways.

It may be familiar in a lot of ways, but Moons of Madness‘ story is very strong. The writing and dialogue are both excellent, and the plot kept me invested for its entire runtime. The best thing about it, though, is how hard it leans into science fiction, mixing familiar tropes with mathematics, chemistry, and botany. These details go a long way towards giving the game an identity of its own. 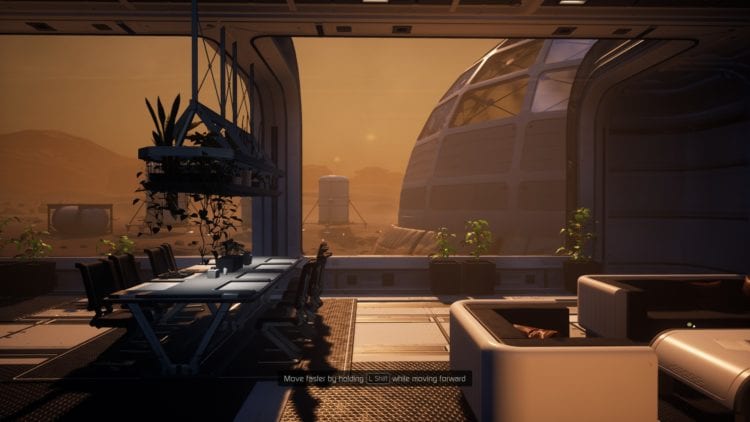 So, whenever this type of game comes around, the inevitable question pops up: is it a regular game or a walking simulator? And, as per usual, the answer is “yes.” Moons of Madness is both an adventure game at times and a walking simulator at others. For the most part, I’d say it leans a bit more on the former than the latter.

Shane generally has some specific tasks to accomplish, and these require more than just walking from place to place. During the game’s first act, for instance, he has to go and recalibrate some solar arrays, as he’s an engineer. This involves him finding the airlock, putting his helmet on, filling up on oxygen, depressurizing the airlock, and then stepping out onto the surface of Mars. He then boards the base’s rover and sets off for his destination. Since he is on Mars, these airlock shenanigans are a pretty common occurrence. This section of the game also does a great job of giving you a taste of his normal life before the Cthulhu hits the C’than.

On top of having a variety of tasks to accomplish, there is also a multitude of puzzles to solve. There aren’t a great many of these, but there are enough. Some of them can even be a bit tricky, though they may seem simple on the surface. There are pipe puzzles, puzzles you have to solve using environmental clues, and some that are barely even puzzles because they tell you exactly what to do. They’re mostly pretty good, though, and I rarely found myself wanting to tear my hypothetical hair out over them. 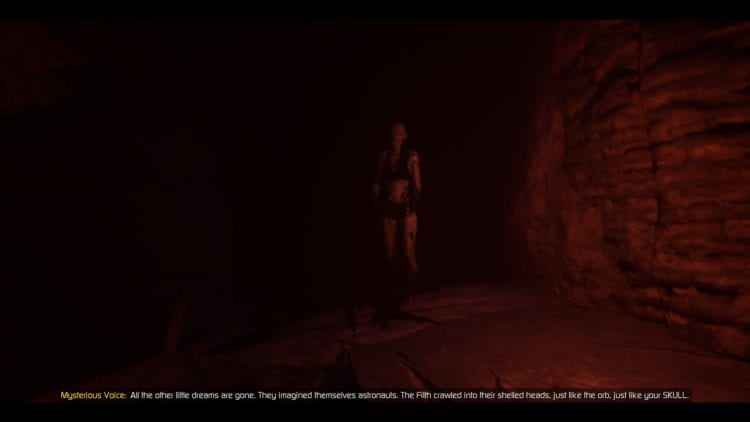 Please can it with the stealth

But some sections aren’t so great. Yes, there are a couple of forced stealth sections. No, the game doesn’t have any actual stealth mechanics. These honestly aren’t too bad, but they can get kind of annoying. One area has a bunch of security cameras that you can hack to temporarily move their line of vision, allowing you to sneak past. But there’s an enemy that’ll kill you in a couple of hits if it catches you. The problem is, if it catches you once, it hits you and knocks you down, making it difficult to get away before you’re grabbed again.

There are also a couple of sections where you must run on rocks to escape creatures that can one-shot you from under the sand. These are also pretty annoying, but, just like the stealth sections, Moons of Madness doesn’t overuse them. They’re there for variety, not frustration, so it’s hard to mind too much. And yes, there are parts where you run from a monster, but these follow suit. There’s a surprising amount of variety on display here, and the game keeps itself moving at a steady clip.

During the final act of Moons of Madness, it does become more of a walking simulator, though. You walk from point A to point B to experience the story and not much else. But, as I said before, the story is very good and the game is good about changing up the experience, so I didn’t have any problem with this. There are also computers scattered around where you can read emails and whatnot. These are all well-written and have some surprising revelations within them at times. 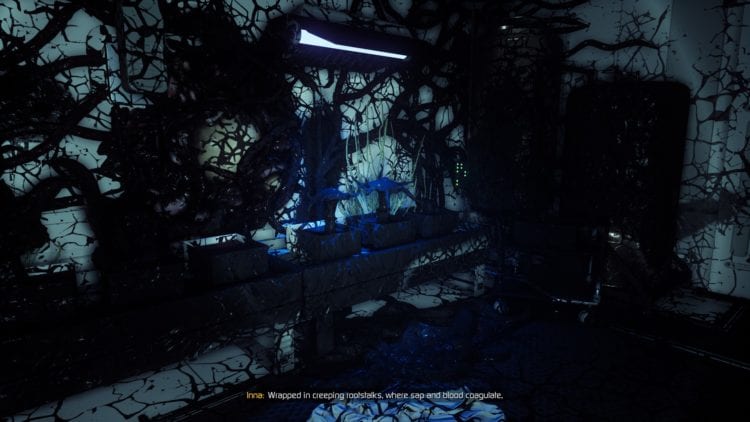 Speaking of revelations, the game does have a big twist that is so obvious you’ll probably guess it after a couple of hours. But when it does reveal it, it doesn’t make it seem like this giant revelation or anything, so there was very little eye-rolling from me. I do have to say, though, that the game just isn’t scary. It’s more focused on the sci-fi side than the horror side, which I’m fine with. As such, there are minimal jump scares and I very rarely felt anxious in regards to what may have been lurking behind the next corner.

Moons of Madness is a very nice-looking game. It has a lot of atmosphere, and the textures and geometry are good too. Once the environments get icky, everything looks suitably gross as you walk by pulsating tendrils and thumping pustules. The voice acting is also pretty great, with the cast sounding believable and the main character’s voice actor doing a good job at conveying his fear.

This isn’t a super-long game, though. It will likely take most players around 6-8 hours to get through, depending on how into reading they are and how long it takes them to solve some of the game’s puzzles. Since the game retails for $25, that’s not bad at all. I feel like the length was just right, for what it’s worth. The game does also have a binary choice at the very end that leads to two very brief, yet solid endings. Thankfully, if you want to see the one you didn’t pick, the game lets you reload to right before the end after beating it. 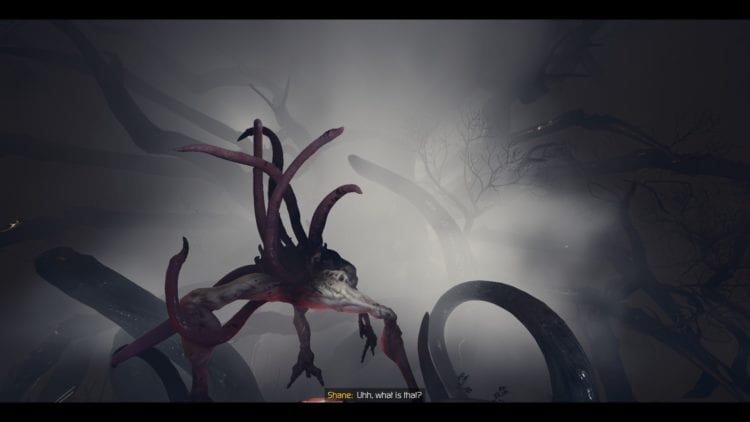 And in the end

So, there you have it. Moons of Madness isn’t scary, but its variety, strong storytelling, and solid puzzles make it a game that I think is worth playing. If you’re hankering for a Lovecraftian story or an atmospheric sci-fi game, it will likely fit the bill nicely. It doesn’t reinvent the wheel, but it comes together in satisfying ways and is the only game I’ve ever played that required me to know how to balance a centrifuge. If that intrigues you, you’ll probably find a lot to like here.

Moons of Madness is available now on Steam.

Moons of Madness may be light on scares, but the great use of its setting and very strong storytelling make for a compelling narrative-driven experience.