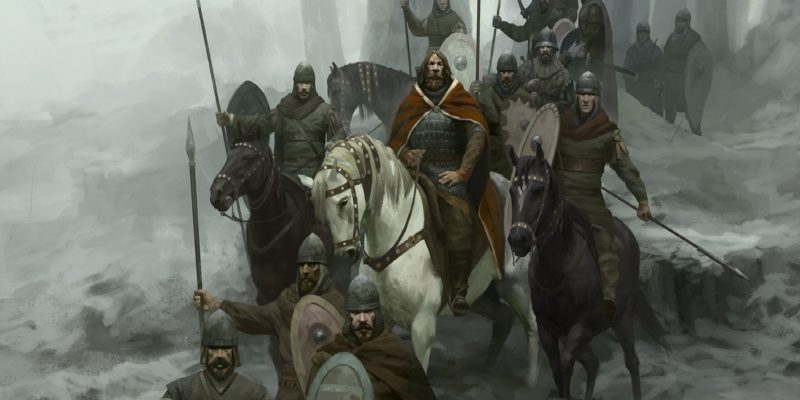 Let’s say you’ve managed to reach clan rank 2 in Mount & Blade II: Bannerlord and you’ve sworn fealty to a ruler. In this mini-guide, we take a look at the different actions and decisions that are possible for vassals such as gaining influence and increasing your Charm skill. 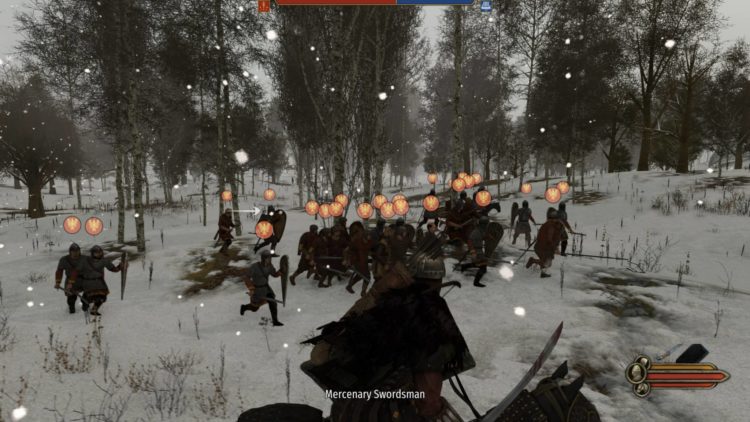 Mount & Blade II: Bannerlord‘s mid to late-game experience revolves around influence. It’s actually one of the toughest resources to amass because of how ridiculously slow it can be. Here are your means of increasing its amount: 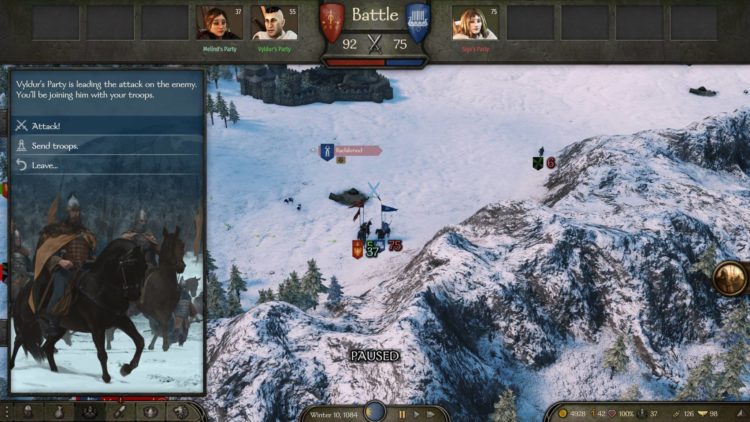 You can also increase this via skills and perks:

The Charm skill is your best bet due to the perks, but it can take a while to level-up. It’s increased by improving your relations with characters, socializing with them, as well as whenever you barter. 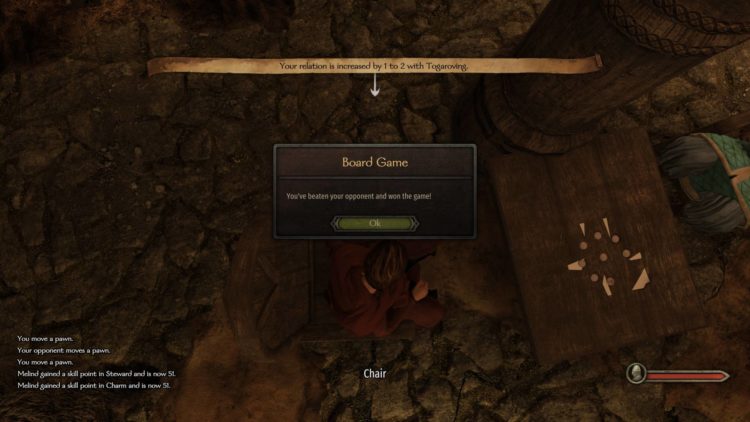 I must admit that I’ve hardly seen the Charm skill get boosted due to improved relations since you mostly just get a point or two. Plus, the mini-games you play with other nobles (seen above) can get really boring at times.

As for bartering, this is when you talk to lords directly and offer them a trade. This should help increase your Charm skill as it’s now working correctly thanks to the latest hotfix. 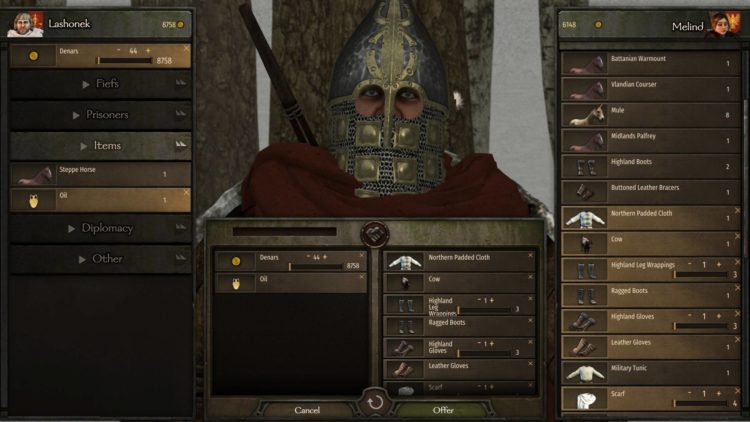 Lastly, you can also get a slight boost to your Charm skill if you keep releasing lords that you capture in battle as opposed to making them your prisoners. This seems to be the most reliable method at the moment given the issues in Mount & Blade II: Bannerlord. This increase in relations will also help you recruit them down the line.

Your vassal friends and the politics of the kingdom

The goal in Mount & Blade II: Bannerlord‘s mid-game is to continue joining your fellow vassals in war while increasing your renown and influence gains from battles. In turn, you’ll get to partake in some decisions involving the kingdom. You’ll see all the possible actions in the kingdom menu (K).

In the “clans” page, you’ll see all the families that are part of a kingdom as well as their lands. If you’re looking for a spouse, you could also take note of any single dudes and dudettes of noble blood. You may also spend 50 influence to support a clan or 200 influence to expel it from the kingdom. Curiously enough, it’s not possible to increase your own clan’s influence — such as a means of boosting your diplomatic standing among the nobility. 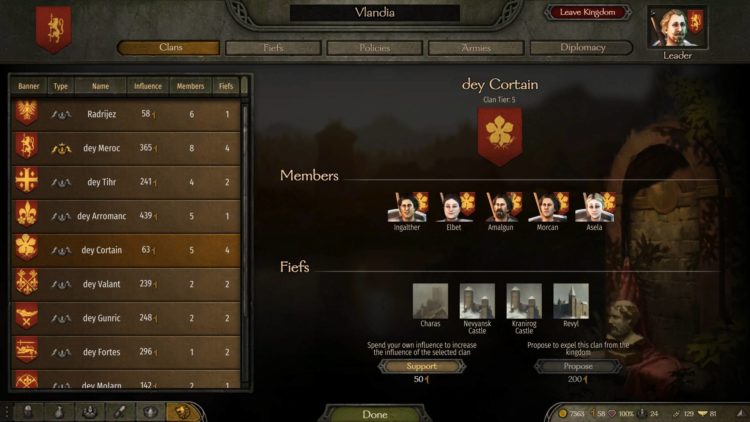 You’ll spot a notification on the right-hand side of your screen when fiefs (settlements) and policies (laws) require a council to vote. In the case of fiefs, cities and castles may be assigned to the kingdom’s vassals and you may even throw your own name in the hat if: 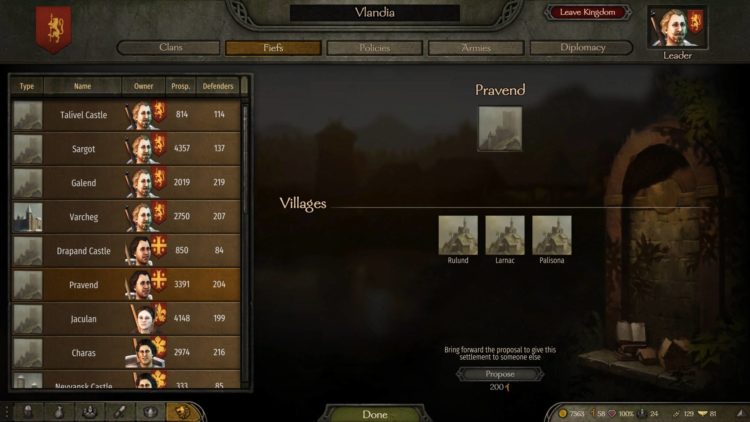 When a settlement has just been captured, nobles will be called to vote in 24 hours in-game time. You’ll need to check the kingdom panel after winning a siege, as, otherwise, no one might even nominate you and the fief would be given to a more popular lord.

Whether you’re one of the candidates set to receive a newly-conquered settlement or you’re the one proposing the vote, you still need to spend additional influence just to nudge some of the voters in your favor or someone else’s, and you’ll incur relations penalties from those who didn’t vote the same way you did. Alternatively, you could just abstain and this won’t affect influence or character relations. 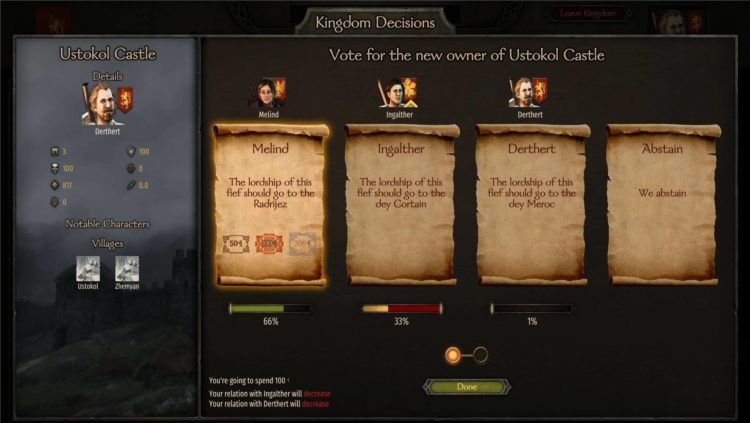 Policies, meanwhile, are the laws governing your kingdom. Clicking on a policy reveals its effects and how much support it has from other vassals. You may choose to call a vote or wait until someone else does. Just like fiefs, you’ll have three options when a vote is called: vote in favor, vote against, or abstain. 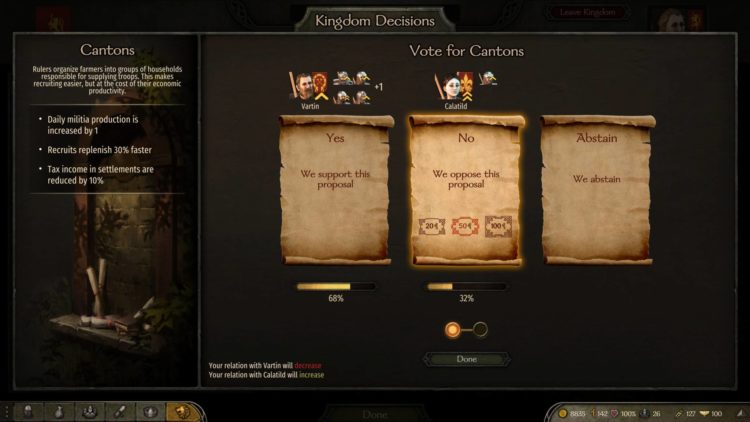 A decent mid-game policy option in Mount & Blade II: Bannerlord is “Senate” which gives tier 3 clans one point of influence per day. If you managed to increase your clan rank via renown, then this can help you in the long run.

Still, beware of those that’ll only increase the ruler’s influence and lower those of non-ruler clans as this can severely hamper your progress. You can spend influence to “Disavow” a law, and more influence to swing the vote your way. 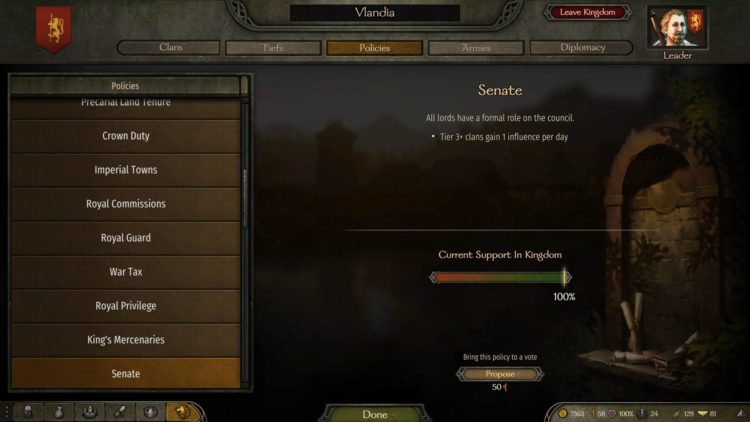 Next up is the armies panel where you’ll see all the active forces exploring the lands of Calradia. Think of armies as bigger groups comprised of multiple parties led by unique characters. Since you’re a vassal, you can also form your own army and even have another lord attached to it. The character will bring his or her party to the fight at the cost of influence.

Note: Only armies at significant strength (depends on their maximum troop limit) can be called on for support. If an NPC’s army lacks troops, you won’t be able to attach them to yours. 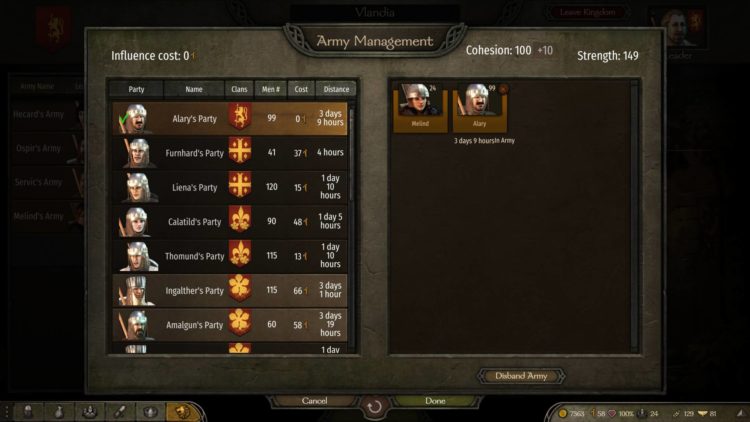 The last page for diplomacy simply shows you how your kingdom is faring in a war. You’ll see if your rival kingdom is on the ropes. Perhaps you might be able to convince a number of lords to join the winning side?

Note 1: Don’t forget that you can still ask a ruler to grant your independence or click that “leave kingdom” button on the upper-right corner of the screen. If you relinquish your holdings, you’ll only suffer diplomatic relations penalties. If you keep your settlements, however, be ready for war and the loss of your influence.

Note 2: You can start earning influence again after you’ve completed “The Dragon Banner” quest to form your own kingdom. There are some powerful kingdom policies that boost your influence gain immensely once you’ve enacted them. 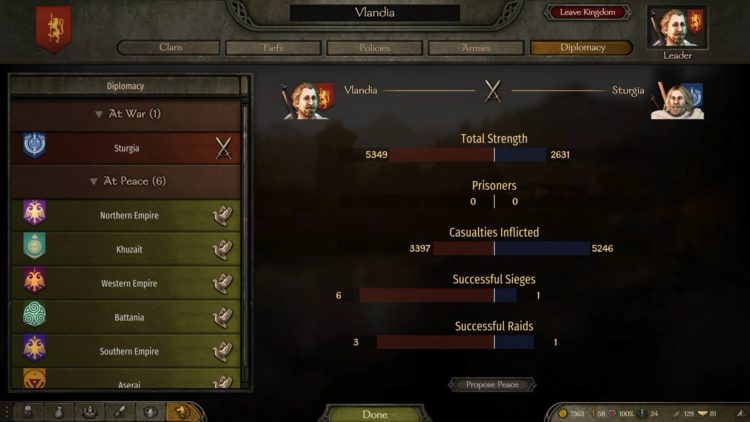 By Jason Rodriguez20 hours ago
Features