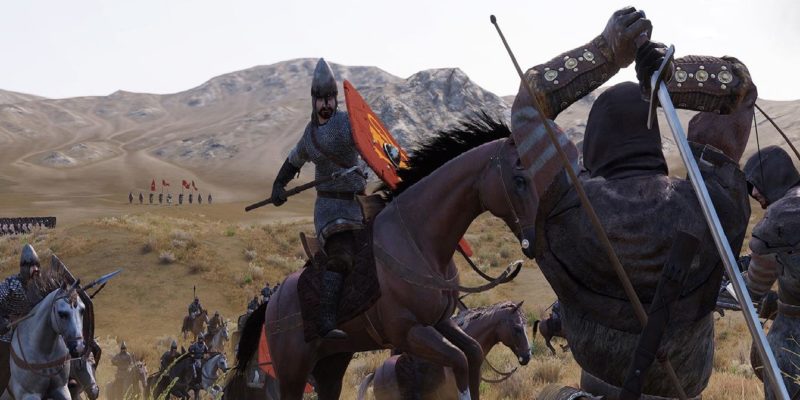 In our series of guides for Mount & Blade II: Bannerlord, we’ve already detailed how to become a mercenary or a vassal, build up your clan’s rank, and play politics with the other lords in your kingdom. Truth be told, most of these actions — especially those that increase your renown and influence — will lead you to unending war. However, there’s a way to have enemy lords betray their own kingdom. Here’s our mini-guide to help you out. 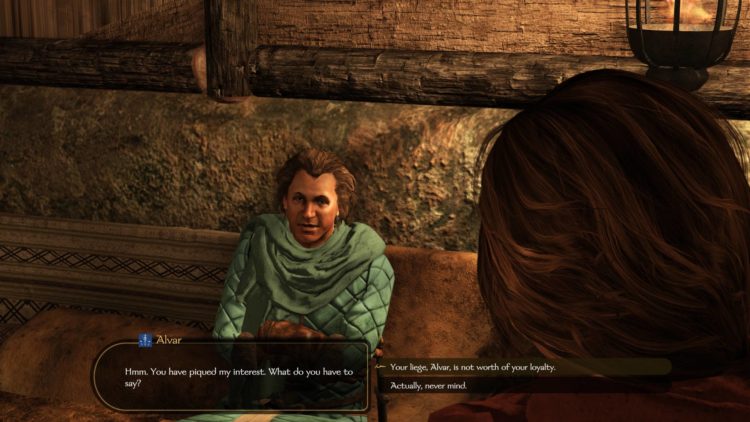 Once you’ve become a vassal (or a ruler) in Mount & Blade II: Bannerlord, you’ll be able to convince lords to join your cause. The only exceptions are the faction leaders themselves. You can open the topic of discussion by speaking to a head of a clan, telling them that their faction’s ruler is not worthy of their loyalty.

Note 1: Enemy lords captured in battle cannot be recruited, but you may (a) keep them as prisoners in your party, (b) imprison them in a dungeon, or (c) execute them. Execution will cause a massive relations penalty between you and that noble’s clan.

Note 2: Assuming you don’t want to recruit nobles, you can ransom them instead in any settlement’s tavern. This nets you a lot of gold and, like the other prisoners you ransom, will help increase your Roguery skill. Alternatively, you could choose to let them go after defeating them in battle. This will help increase your Charm skill. 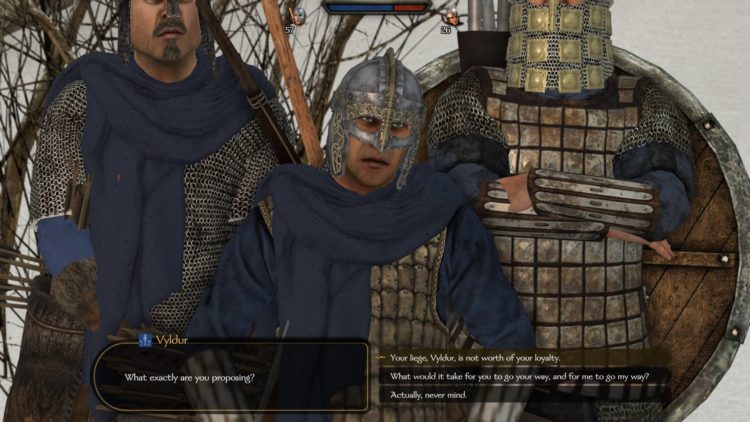 In any case, once you’re speaking to the head of a family, you’re then asked four questions with multiple choices. You need to get all four “pips” to light up based on your answers.

Your available answers have varying degrees of success and the probability is based on your skills and other traits. For instance, if you have a high Charm skill and the “Mercy” trait (from your chosen background during character creation), then some types of answers might be more apt. It’s also possible that having high relations with lords would convince them readily. 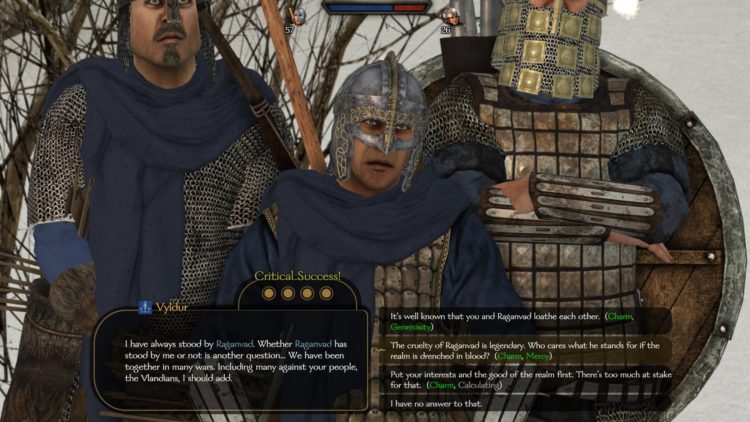 Here are some results:

The dialogue system is very weird right now, and it’s possible for answers with higher percentages to still fail. If you weren’t able to convince a lord, it may take a while until the dialogue option is made available again; the cooldown seems to be variable. It’d be wise to cancel the dialogue if the odds aren’t in your favor. 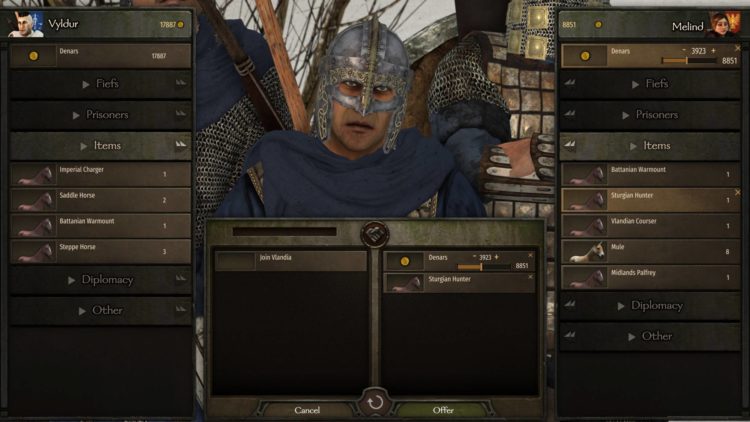 However, if you do pass all the dialogue checks, the barter screen will open (seen above). The lord will offer to join your kingdom and you’ll need to trade gold or other items to make them accept. The entire clan then join your faction.

The same process also applies once you form your own kingdom. You won’t start with any vassals, and you’ll have to recruit characters from other kingdoms. For best results, look for nobles who already own settlements. If you’re at war with a kingdom and you manage to recruit one of their vassals, their entire clan will bring all their holdings to help your expansion significantly.

Update: Patch e1.0.5 has made it harder to trigger enemy defections if you’ve previously captured settlements from their kingdom. It might still work if you’re at war but you avoided grabbing their territories prior to recruiting them. 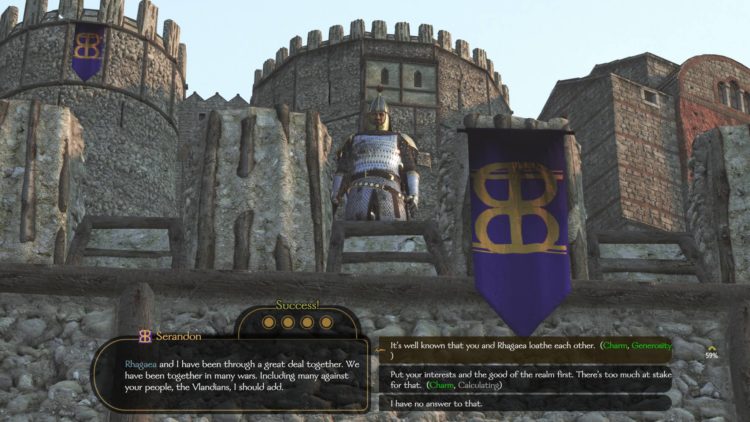 Keeping an extra save isn’t just to ensure that you can reload when you fail the dialogue checks. It’s also to prevent any mishaps when you encounter a particularly nasty bug when you recruit enemy lords.

This has something to do with an army moving towards you prior to recruitment. The army will continue to advance and challenge you to battle despite already being a vassal. This will keep happening even after you end the conversation, throwing you into an endless loop unless you reload. Alternatively, you can open the Kingdom panel (K) and attach them to your army. I guess Vyldur just really wanted to show off his new, recolored cloak. 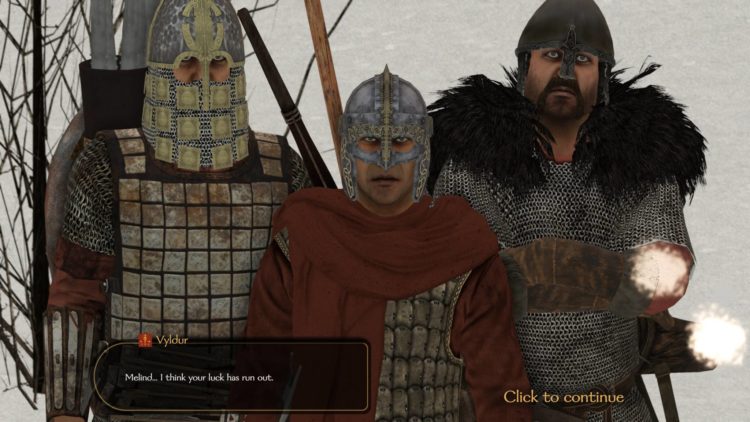